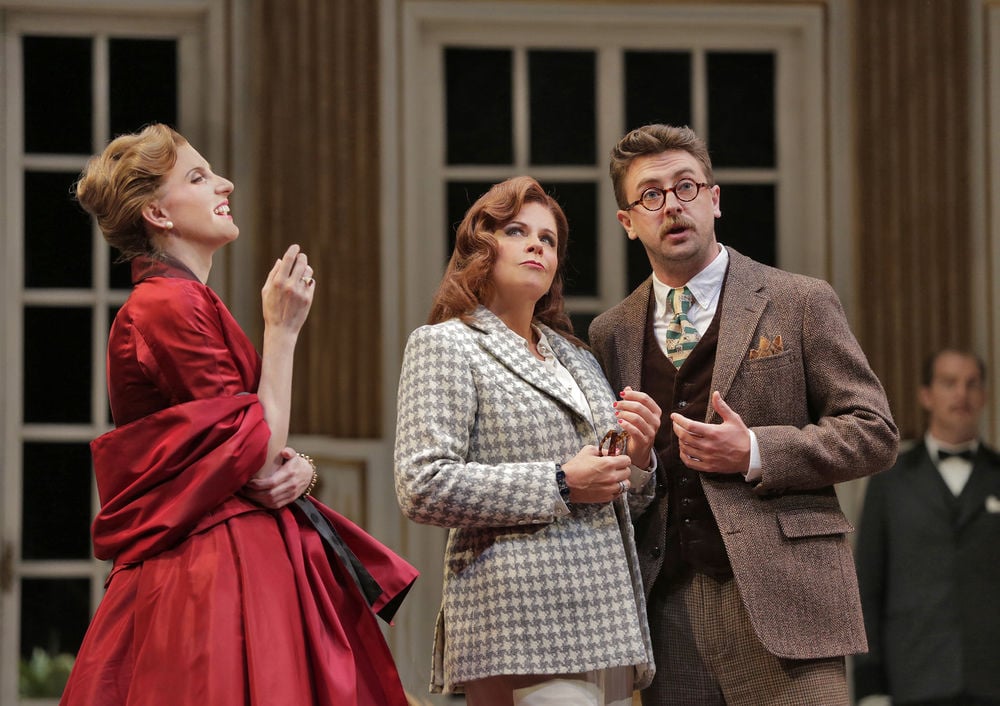 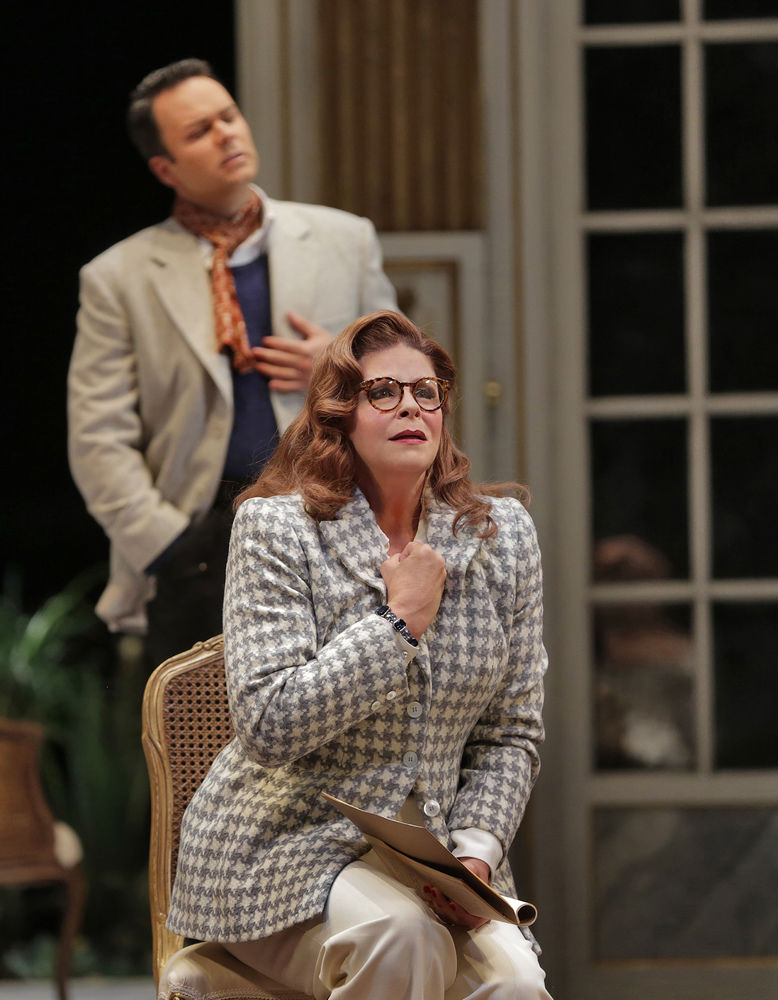 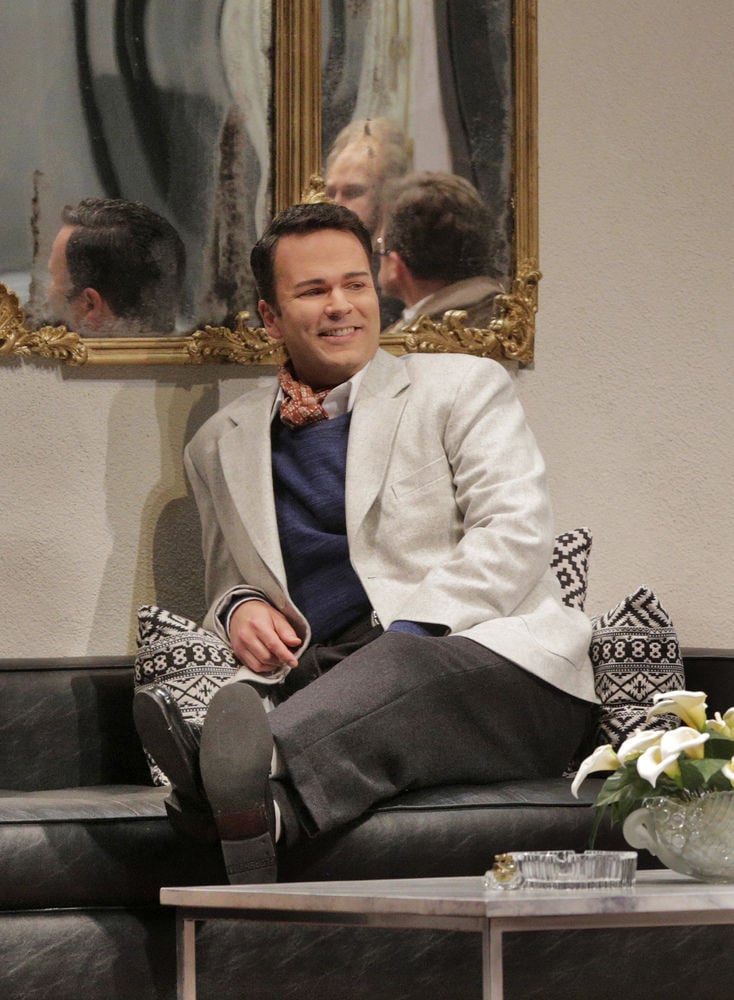 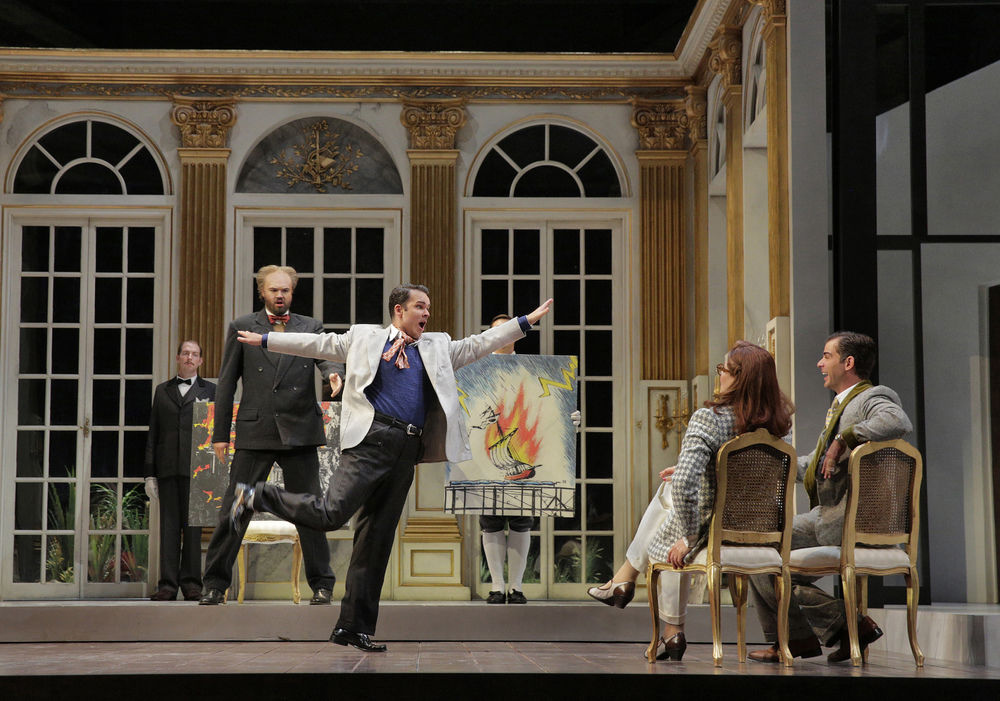 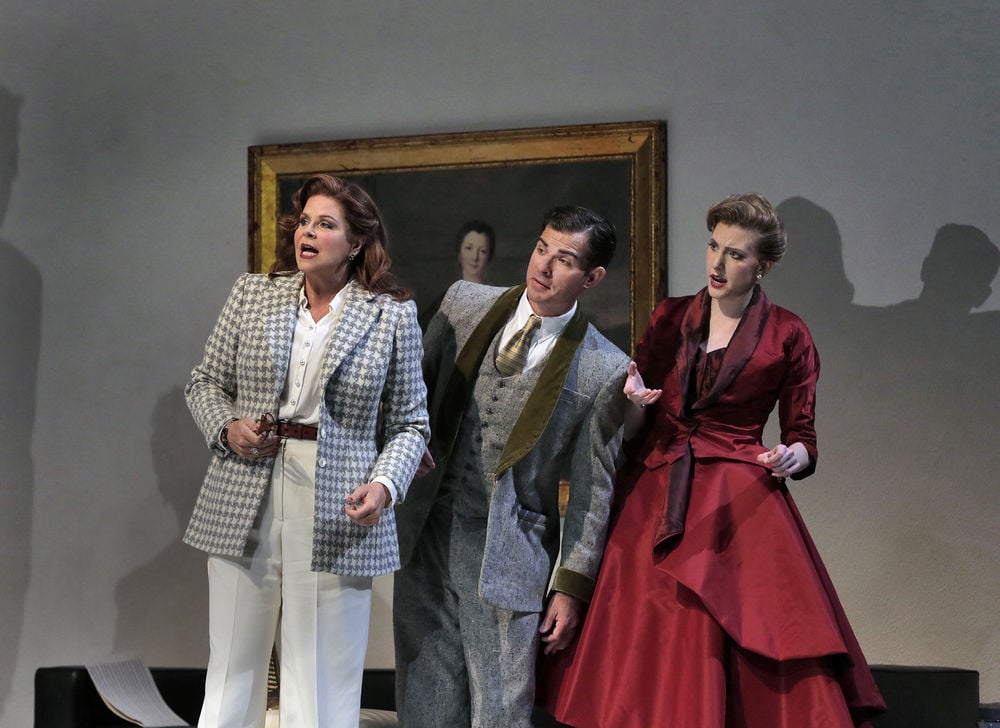 Susan Graham as Clairon, Craig Verm as the Count and Amanda Majeski as the Countess in Capriccio. Courtesy Ken Howard/Santa Fe Opera 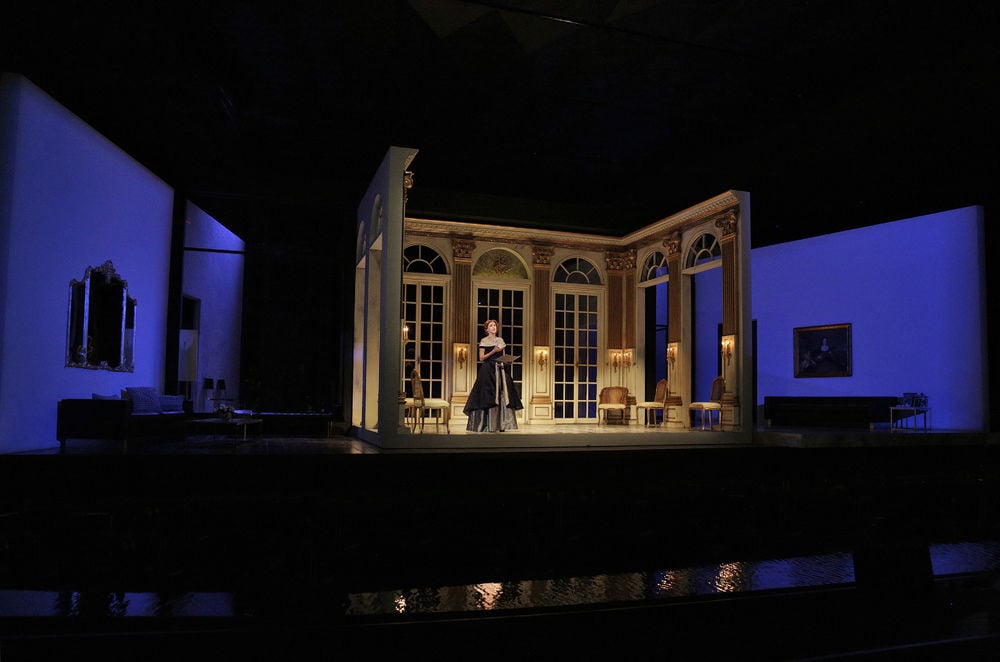 Susan Graham as Clairon, Craig Verm as the Count and Amanda Majeski as the Countess in Capriccio. Courtesy Ken Howard/Santa Fe Opera

Richard Strauss’ last opera, Capriccio, is a rather private piece. It is essentially an extended debate on an intellectual question: In opera, does music or text have the upper hand? There are no sword fights or love potions or manic Gypsies here — just cultured conversation about aesthetics. That’s not to say that the piece lacks vigor. Strauss (assisted by conductor Clemens Krauss in crafting the libretto) cleverly personified the ideas that fuel the discourse, representing them in the characters of the composer Flamand, the poet Olivier, the theater director La Roche, the actress Clairon and even the prompter Monsieur Taupe (“Mr. Mole,” famous for dozing off in his subterranean nest). They exist to delight their hostess, the Countess Madeleine. Flamand and Olivier are both in love with her, and the work’s suspense, such as it is, centers on whether she will yield her heart to the tunesmith or the wordsmith. She is the last of the soprano heroines that were the composer’s particular specialty, and there is no doubt that she is the avatar of Strauss himself. Or vice-versa, since Capriccio strolls along a Möbius strip in which life and art exist on a continuum — an opera about a salon gathering that gives rise to that very opera, or, viewed from the other direction, a salon gathering that becomes an opera about itself. It’s all terribly “meta.”

Introduced in Munich in 1942, Capriccio proved popular in German-speaking lands but didn’t make much impact elsewhere until the mid-1950s. It reached the United States through a student production at The Juilliard School in 1954, but it was The Santa Fe Opera that gave the work’s professional premiere in America, in 1958. (Portraying Clairon in that production was Regina Sarfaty, who remains a vibrant member of Santa Fe’s arts community.) The company continued its stewardship by revisiting Capriccio in 1966 and 1993, and now here it is again in a handsome, witty and warmhearted production that will be a particular treat to opera insiders but ought to leave anyone basking in a pleasant afterglow.

Strauss set his opera in the mid-18th century, when the words vs. music debate was at high tide, and both the libretto and the music make frequent references to writers and composers of that period. Director Tim Albery preferred to set the piece in what seems to be the 1940s, and Tobias Hoheisel’s sets (he oversaw both scenic and costume design) bridge the chronological gap. The central room is the Countess’ salon, a study in gold-over-white rococo elegance, replete with fluted pilasters rising to Corinthian capitals. At the outset, floor-to-ceiling French doors look out onto the distantly setting sun — in this case, the actual setting sun, which further erodes the indistinct boundary between art and reality.

Most of the action takes place in this salon, but some spills into two modernist antechambers on either side. This disparity helpfully links the era specified in the script to that designated by the production. Fashionable costumes of that later period proclaim wealth and offhanded elegance. Lighting, by Malcolm Rippeth, shows off everything to utmost advantage. At one point, as the Countess contemplates an abstract picture hanging on the wall, an unseen light source casts her silhouette across the canvas. The result is that she is looking at her painting and her shadow at the same time, in the same place. Art and life are again interfused.

Everything revolves around the Countess. Soprano Amanda Majeski portrays her with casual charm and sincere warmth, creating a character in control of her world and secure in her situation. Politesse is so deeply imbued in her character that she carries it without the slightest self-consciousness. Majeski’s soprano is tightly focused, her intonation is spot-on and her delivery rolls forth with conversational naturalness. Her timbre is pure, sometimes approaching a “white sound” that allows prominence to head resonance. Her vocalism harks back to a kind of singing we don’t encounter much today. If you heard her pure timbre and pristine diction on a recording, you might guess it was an opera star of the 1940s or ’50s — and a fine one. Her singing has a reined-in quality that proves apt for the portrayal she has crafted. A slight quiver enters her voice now and again, adding a quality of wistfulness. It adds to the vulnerability she allows herself to display in her touching final scene, where she recognizes that her aesthetic elegance is a barrier to her own emotional fulfillment — an acknowledgment she bares to herself alone, out of view and earshot from anyone else.

High quality carries through to all the other roles in both their musical and dramatic aspects. Tenor Ben Bliss as Flamand: Such a lovely voice, lightly buoyant yet fully fleshed out. Most of us will probably want him to win the Countess’ affections. He most likely will, and they’ll move on through life singing gorgeous duets together. Baritone Joshua Hopkins as Olivier: His bright, unfussy delivery provides a useful counterbalance to a characterization molded a bit toward sulkiness. As La Roche, bass-baritone David Govertsen is the amusing personification of theatrical vanity. His frank delivery lets the comedy roll forth unimpeded, reaching its heights in the chaotic try-out of the theater-work he is proposing and in his earnest recitation of the adulatory inscription he hopes will someday adorn his gravestone.

Here, too, is the marvelous mezzo-soprano Susan Graham, a superstar who shows how willing she is to meld into an ensemble cast. She could scarcely be bettered in her first outing in the role of Clairon, looking every bit the movie star in her snazzy white slacks and chic checked jacket, dragging distractedly on a cigarette. Directors sometimes allow mezzos to play this part with temperamental flamboyance, but Graham eschews the camp, instead portraying a poised stage aristocrat who can hold her own among persons born into titles. She is also subtly flirtatious, just enough to lead on the Count (Madeleine’s brother), here sung by baritone Craig Verm. This character, too, is sometimes “hammed up” into an uncultured lout, but not here. He may not be as refined as his sister, but the Count is nonetheless a member of polite society. Verm confirmed the strong impression he made earlier this season as Sonora in La Fanciulla del West, and one hopes we will hear more of him in future seasons.

Soprano Shelley Jackson and tenor Galeano Salas were entertaining as the overwrought Italian singers; bass-baritone Adrian Smith was a solemn Major-Domo; and tenor Allan Glassman gained smiling sympathy as the pathetic prompter, who bumbles in to discover that he has slept through all the fun. Ballerina Beth Miller proved lithe and graceful in the dance sequence (choreographed by Jodi Melnick), cheerfully tracing her busy paces in less space than she probably would have liked.

Although Strauss envisioned the piece as a single act of about two and quarter hours’ duration, Santa Fe Opera inserts an intermission (as do many opera companies), which yields a full-length evening. There were a few places where the question of, “Which is more important, the words or the music?” seemed to be answered with “The orchestra.” Both Bliss and Hopkins had trouble being heard in a couple of climactic phrases, though not Majeski, whose tone penetrated the texture without sacrificing its beauty. Leo Hussain conducted a relatively taut reading, which is probably a good thing given the native loquaciousness of Strauss’ style. Listeners should simply give in to it. In the midst of troubling news from around the globe an escapist evening basking in Straussian loveliness provides a tonic for the times.