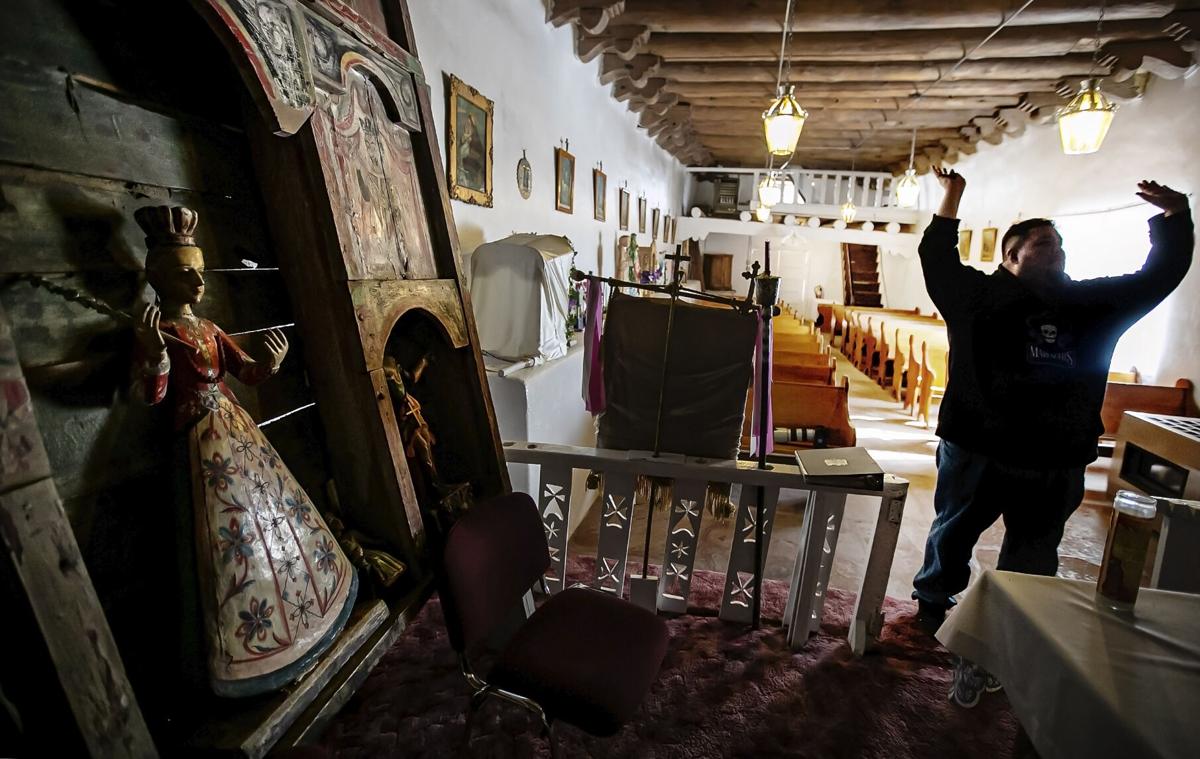 Angelo Sandoval, mayordomo at the San Antonio de Padua church in Cordova, talks about the church's history Friday during a tour. Nuevo Mexico Profundo, a nonprofit organization founded to preserve historic churches, has raised money to restore many of the art pieces in the small rural church that date to the 19th century. 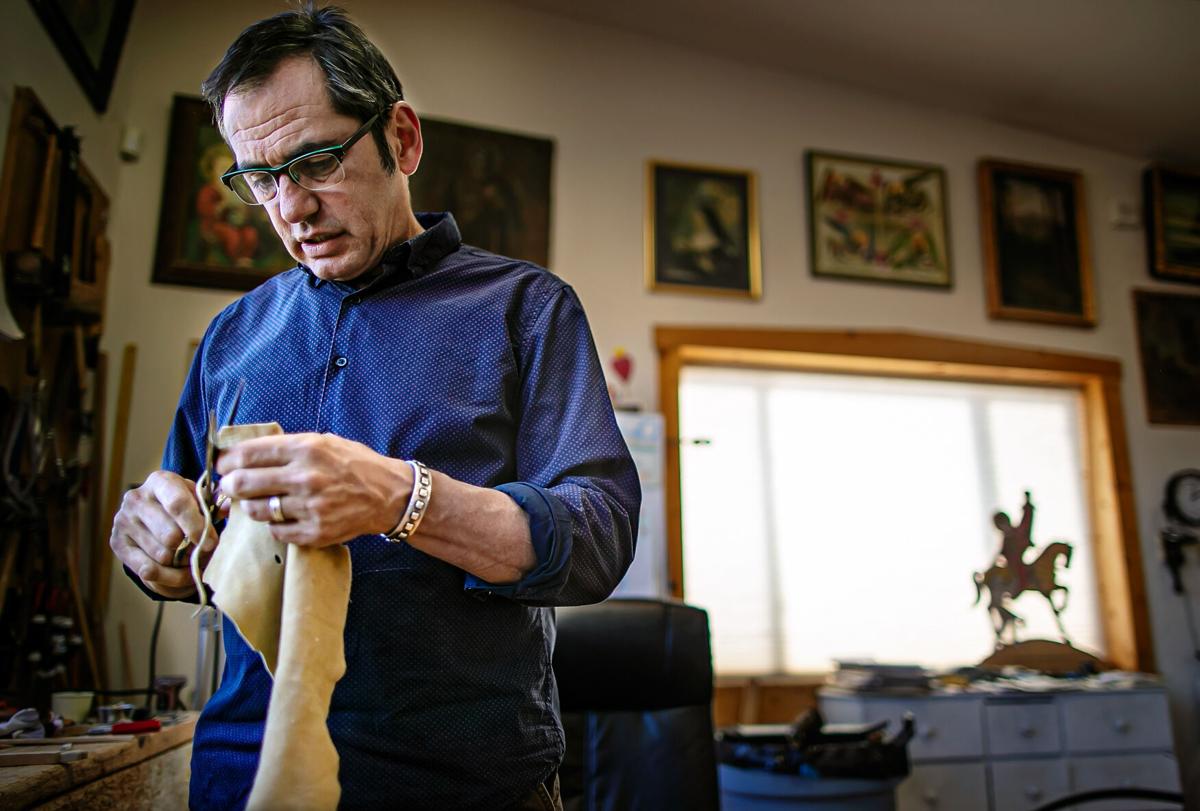 Artist and master conservator Victor Goler works on a few restoration projects Wednesday in his Taos studio. Goler has been commissioned to restore the altar screens and statues at the historic San Antonio de Padua church in Cordova. 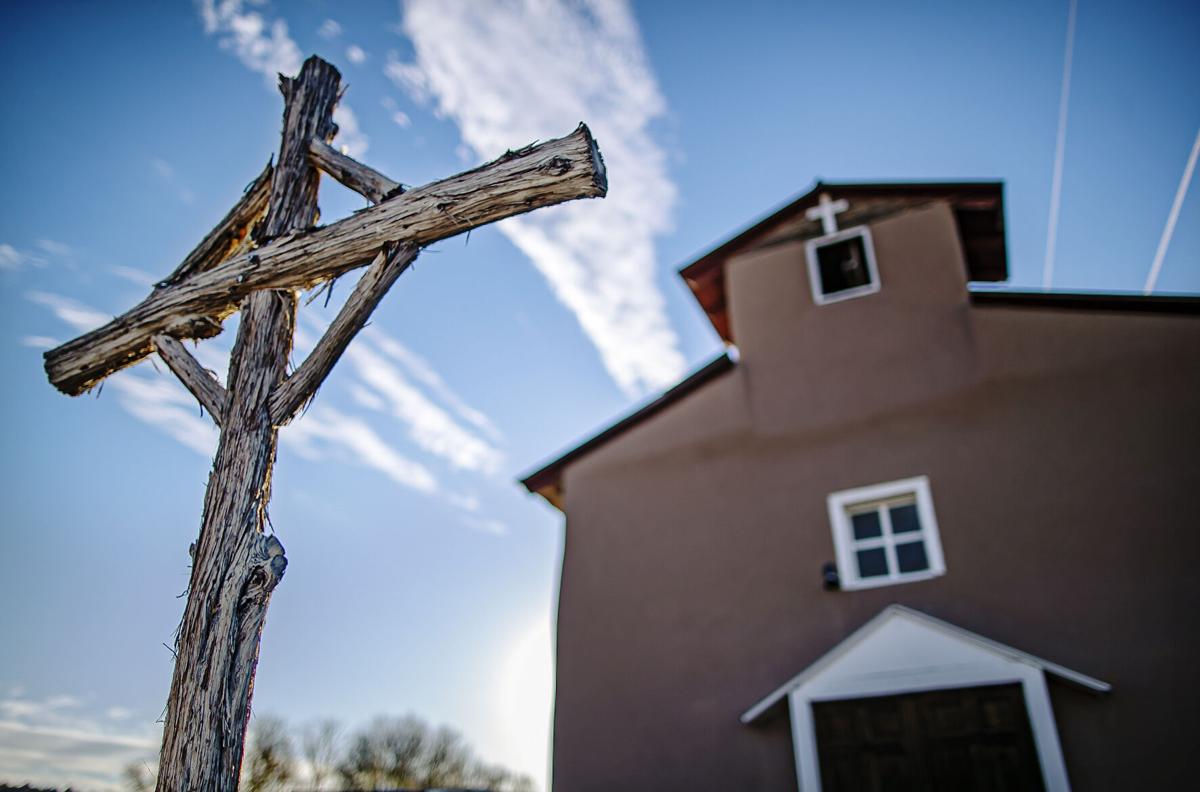 Nuevo Mexico Profundo, a nonprofit organization founded to preserve historic churches, has raised money to restore many of the art pieces at the San Antonio de Padua church. 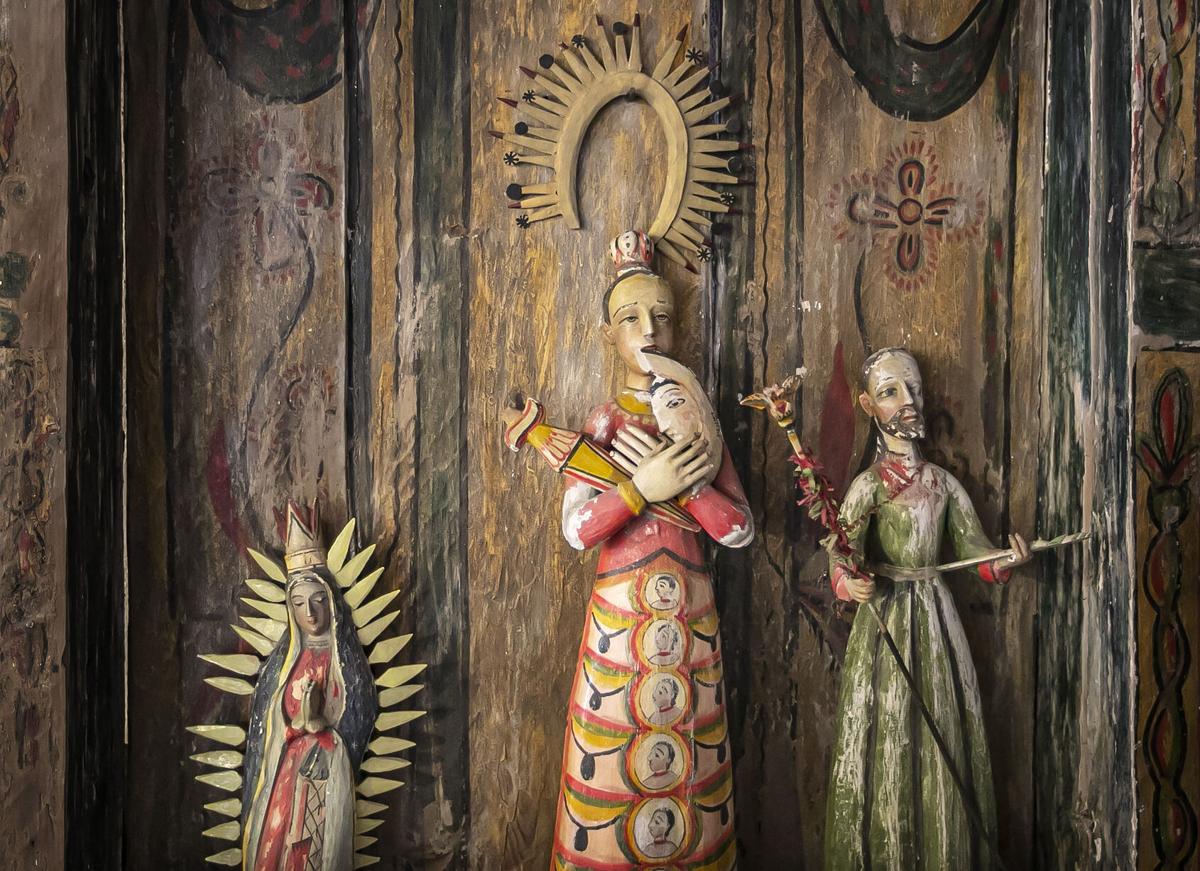 Nuevo Mexico Profundo, a nonprofit organization founded to preserve historic churches, has raised money to restore many of the 19th-century art pieces at the San Antonio de Padua church in Cordova.

The treasures hidden inside San Antonio de Padua church in Cordova are about to undergo a painstaking restoration.

The retablos (painted altar screens) and bultos (statues) date to the historic church’s construction in 1832; they depict Catholic saints and events such as the Crucifixion.

The project is being led by Nuevo Mexico Profundo, a nonprofit organization founded in 2018 to raise money to preserve historic churches. Over the next few weeks, it will restore three altar screens and 22 statues created by José Rafael Aragón, a master santero, or creator of religious images.

“I picked this project because it needed to be done,” said Frank Graziano, founder and executive director of Nuevo Mexico Profundo.

Cordova is a village of around 500 residents between Española and Peñasco off the High Road to Taos (N.M. 76). Originally called Pueblo Quemado — because of a charred Pueblo ruin nearby — the town established a post office in 1900 and changed its name to Cordova, the name of a local prominent family.

According to historical church documents, San Antonio de Padua church was built in 1832 and constructed of adobe bricks. It includes an altar on the west end and a choir loft on the east end, where two sets of double doors sit below the bell tower.

“There’s only a small group of us that use the church consistently,” said Angelo Sandoval, who manages the church as its mayordomo. He said it’s used on occasion for funerals, but it had not hosted a consistent Mass for at least 10 years.

“We have Mass on the feast day of our patron saint on the 13th of June or the Sunday closest,” he said. San Antonio de Padua was a Portuguese Catholic priest and friar of the Franciscan Order who died on June 13, 1231.

Painted on the screens in red, green, gold, black and blue are depictions of St. Gertrude the Great, Our Lady of Sorrows, the Franciscan Shield, St. Peter the Apostle, St. Raphael the Archangel, St. Michael the Archangel, Our Lady Refuge of Sinners, St. Claire of Assisi and more.

In front of the screens, standing 12 to 20 inches, are 22 bultos including Jesus on the cross, Jesus as a boy, the Virgin Mary, St. Anthony of Padua and Our Lady of Guadalupe.

Graziano said he raised $24,000 for the restoration. The primary donors include the Thaw Charitable Trust, Susan Foote, and Anne and Jeff Bingaman. Bingaman represented New Mexico as a U.S. senator from 1983-2013.

The restoration is set to be carried out over several weeks beginning Monday by master santero and restorer Victor Goler, with the approval of the Archbishop’s Commission for the Preservation of Historic New Mexico Churches.

Goler, 58, lives in Taos, where he creates religious paintings and restores religious artifacts. He grew up in a family of restorers and began working with his father and uncles around age 13, he said.

He has also worked as a conservator for the Harwood Museum of Art, the Millicent Rogers Museum and the Tesoros de Devoción (The Larry Frank Collection) at the New Mexico History Museum.

“I have a good understanding of the materials that were used,” Goler said. “José Rafael Aragón, his methods were very traditional.”

The wood for the screens and statues would likely be Ponderosa pine, and the gesso (primer) would be made from an animal hide glue mixed with white gypsum, Goler said.

“As far as the pigments go, they had to crush all their own,” Goler said, using minerals, plants and bugs for colors. The artists also would create varnishes by distilling grain alcohol and using it to dilute tree sap.

“What we are doing in this conservation effort is we’re just conserving,” he said. The process involves surface cleaning, stabilizing the pigment and sealing the work with a high-quality varnish.

The process includes creating an animal hide glue made from Russian sea sturgeons and gluing the paint back onto the gesso. Goler and his team will use syringes to get the glue behind the chipped paint. He said all the work will be done on the premises and will take around 200 hours to complete.

Sandoval, 43, who lives in Cordova, said he hopes the restoration will preserve the art and reinvigorate the congregation.

“I want to make sure that I leave the church in better condition, so that my grandkids and great-grandkids are able to utilize the space for their prayers, for their baptisms, for, hopefully, their weddings,” he said.

So wonderful to hear!! The church is a treasure , and the santos ( bultos) are some of the most beautiful anywhere.