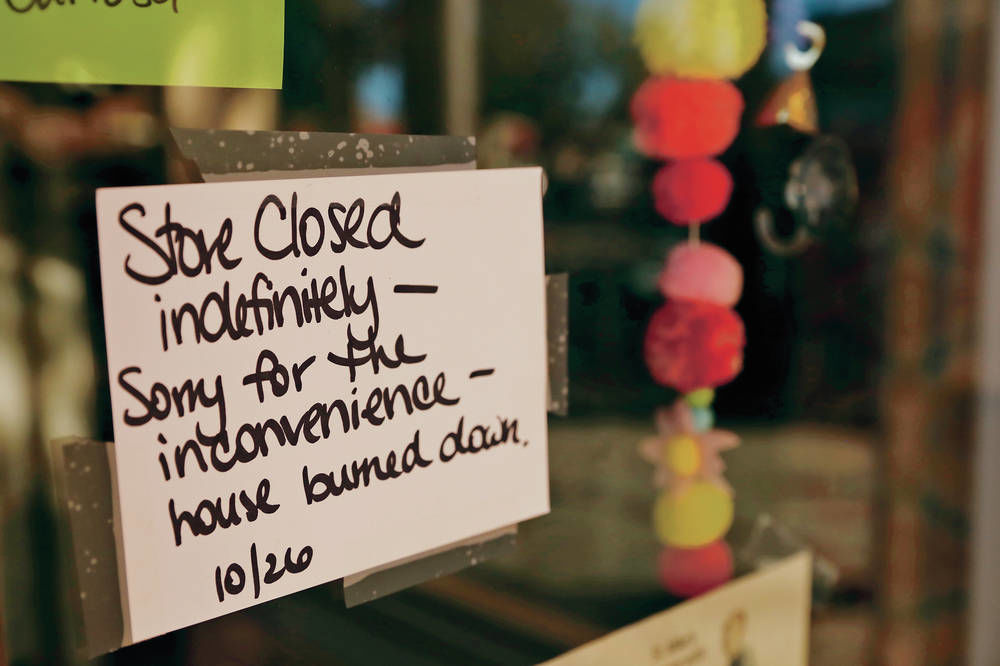 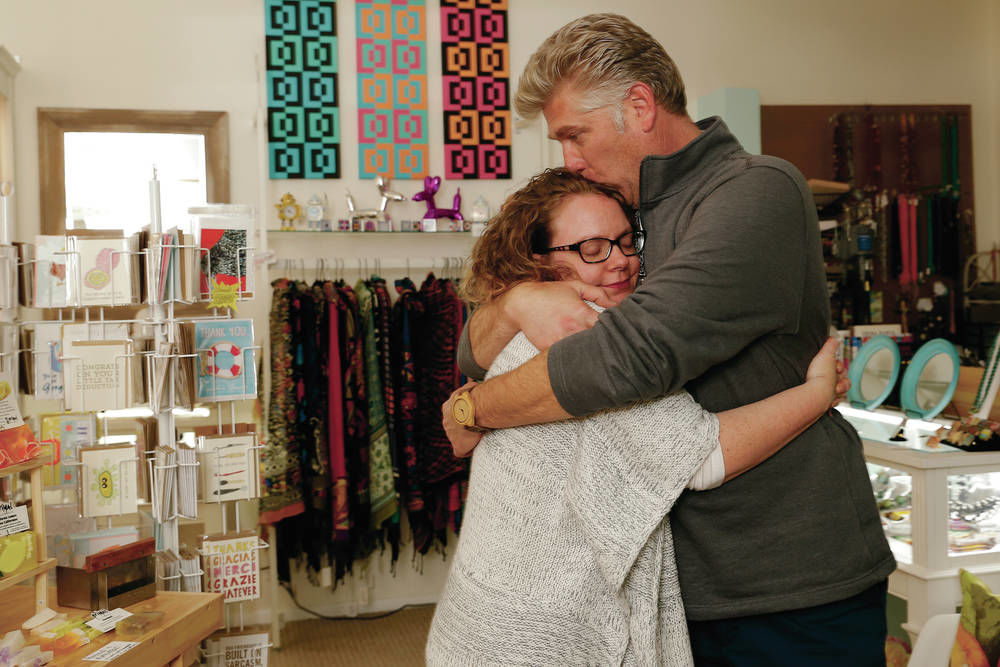 Cindy Cornelsen, left, and Kale Blackmon embrace Friday in their shop, Smash Bangles. The gift store opened 7 months ago, but business has been halted after the pair lost their home in a fire. Luke E. Montavon/The New Mexican 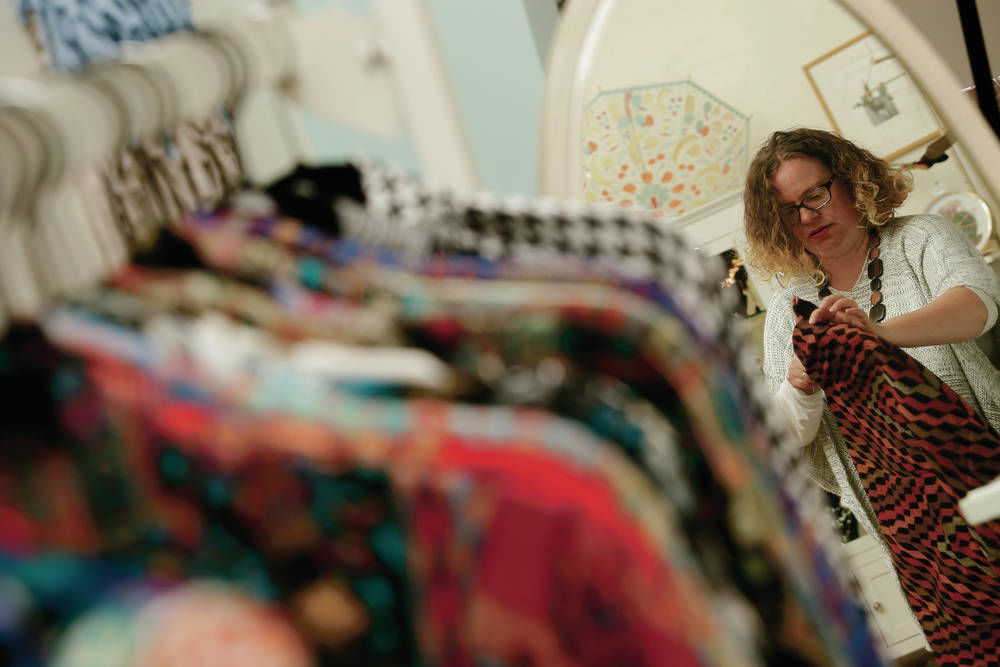 Cindy Cornelsen, left, and Kale Blackmon embrace Friday in their shop, Smash Bangles. The gift store opened 7 months ago, but business has been halted after the pair lost their home in a fire. Luke E. Montavon/The New Mexican

Cindy Cornelsen was sound asleep Saturday morning when her husband, Kale Blackmon, woke up to investigate a beeping sound.

He thought the crackling and popping noises were coming from a space heater. Then he walked out on the balcony of the couple’s apartment, looked down and saw flames.

The apartment below was burning. Theirs was next.

After unsuccessfully trying to wrangle their black rescue cat Bruiser from under the bed, Cornelsen and Blackmon fled out the front door.

“We were both climbing on our bellies under the bed, trying to grab the cat, but smoke just started pouring into our bedroom. We had to run out,” Cornelsen said. “The living room wall was on fire, so I couldn’t reach for my purse or keys hanging there because I would burn myself.”

The couple, who lost almost everything they owned, and around seven other families have been displaced from their damaged units at the Los Piñones Apartment Homes complex on Calle Mejia, Cornelsen said.

They still have Bruiser, who they had adopted from the Santa Fe animal shelter.

“The firemen did rescue our cat,” Cornelsen said. “We both were just crazy, telling every first responder that we could see, ‘We know you have to save people, but we have to get Bruiser.’ ”

Santa Fe police have said they suspect 59-year-old Gloria Lucero Buschman, who died in the blaze, ignited it in her apartment. A police report said investigators found a suicide note.

Buschman leaves behind a 20-year old daughter, Amy Buschman, who could not be reached for comment.

Residents portrayed Gloria Buschman as a troubled woman who rarely spoke to neighbors, according to a police report. Some told officers they often heard her yelling to herself and occasionally pounding on the walls of her home.

On Saturday morning, a woman who lived in a nearby apartment was walking her dog past Buschman’s home and saw Buschman inside, sitting on a couch that was burning. The woman yelled at Buschman, telling her to leave the apartment, and called 911, she told police.

After speaking with the 911 dispatcher, the woman continued to urge Buschman to leave the burning apartment, the police report said, but she watched as Buschman got up from the couch and moved farther into her apartment.

Deputy Police Chief Ben Valdez said reports are preliminary and that the cause of Buschman’s death and the fire are still under investigation.

Joni Stotts, a manager of the apartment complex, did not return calls Thursday seeking comment on the fire and its aftermath. According to the police report, Scott told officers Buschman was four months behind on her rent and was supposed to be evicted.

Buschman had left a contact number for an attorney who represented the estate of her deceased husband, Eric Buschman, Stotts told police.

Eric Buschman was fatally stabbed in San Francisco on Oct. 12, 2009. The San Francisco Examiner reported he had been unloading his truck with a friend after a camping trip when he was attacked by 22-year old Charlie Foniloa Sekona, who was diagnosed with schizophrenia.

Sekona, who had lived with his family blocks away from where Eric Buschman was fatally stabbed, was arrested 10 days later.

That wasn’t Sekona’s first run-in with the law.

In March 2009, he was accused of beating a Costco worker sweeping a sidewalk. Prosecutors charged Sekona with a misdemeanor, allowing him to enter a program in which he could receive mental health counseling.

But court records show the criminal case was dismissed in November 2013. After Sekona filed for bankruptcy, a civil suit Gloria Buschman had brought against him also was dismissed.

Eric Buschman’s obituary said he had worked in the packaging industry and was the longtime basketball coach for St. John Catholic School in San Francisco.

Gloria Buschman had posted pictures of her husband on her Facebook page, and often gave updates when hearings were scheduled in Sekona’s case. Her last post was in March 2013 — an update about her daughter, Amy, getting into the same prestigious high school Eric Buschman had attended.

Nora Halloran of San Francisco started a GoFundMe campaign with a goal of raising $2,000 for Amy Buschman, who is pursing a modeling career in California. Halloran did not respond to messages seeking comment.

A GoFundMe campaign with a $50,000 goal was set up by a friend of Cornelsen and Blackmon to help the couple get back on their feet after the fire.

They moved to Santa Fe in January, the couple said. Blackmon works as a chef at Bouche Bistro and Cornelsen owns Smash Bangles, a boutique near the Railyard branded as the quirkiest gift shop in Santa Fe. They are staying at a friend’s home. They brought Bruiser with them and not much else.

From the time he realized the lower-level apartment was on fire, Blackmon said, it took the couple three minutes to leave their apartment, run barefoot through a burning breezeway and reach safety. In that time, they lost most of their possessions, including paintings, sculptures and around 1,000 books.

“We had things from all over the world. Gifts from friends and fellow artists. Things that we love, that were funny. Things that are irreplaceable,” Cornelsen said. “We lost everything. That’s what we’re having a hard time wrapping out heads around now. What does everything mean?”

This is an unfortunate series of events and I hope all involved get the help they need soon. But I can't figure out why the one couple closed their store. Maybe I missed something in the article.