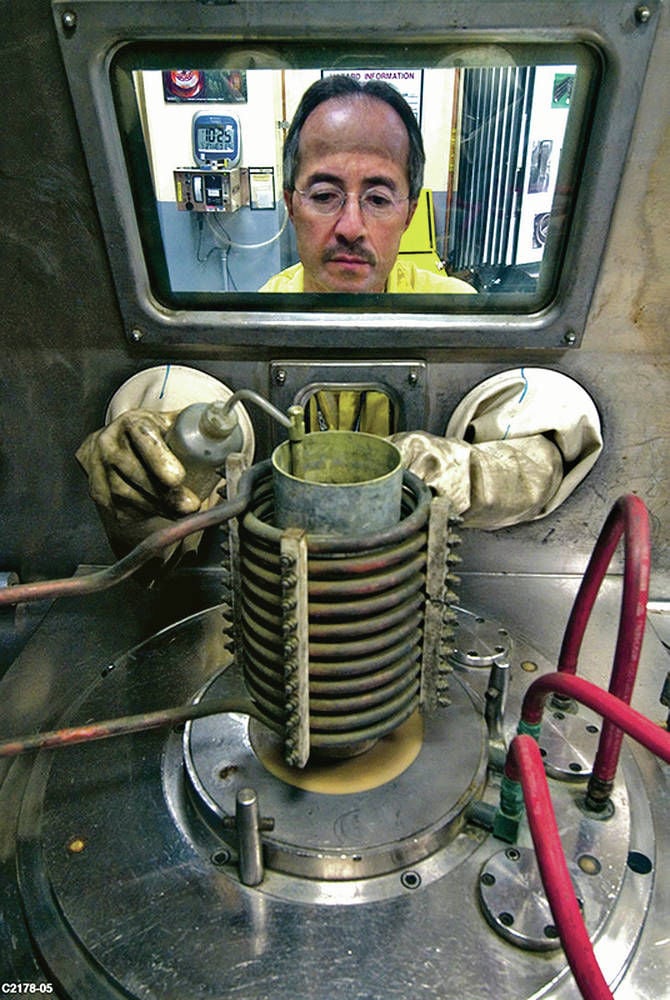 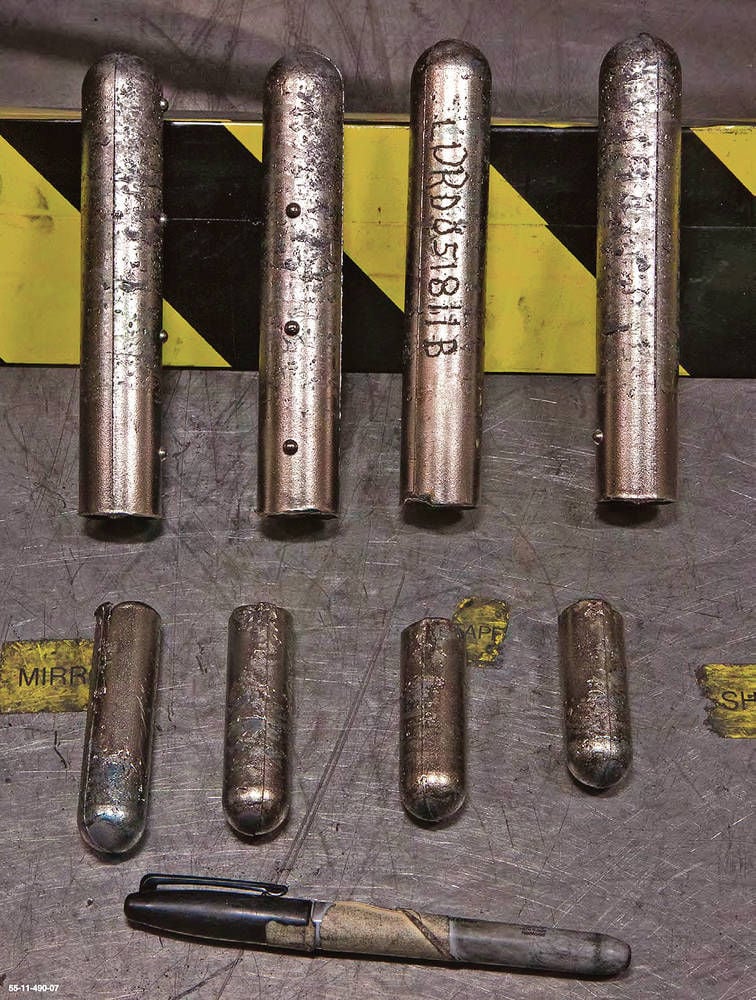 In 2011, LANL workers placed eight rods of plutonium within inches of each other — had a few more rods been placed nearby, it would have triggered a disaster. Los Alamos National Laboratory/U.S. Department of Energy

In 2011, LANL workers placed eight rods of plutonium within inches of each other — had a few more rods been placed nearby, it would have triggered a disaster. Los Alamos National Laboratory/U.S. Department of Energy

Safety measures put in place to avoid serious nuclear accidents while handling radioactive materials were violated by workers at Los Alamos National Laboratory on two occasions in mid-August, according to a report from an independent board charged with advising the Department of Energy on safety issues at nuclear sites.

The details appear in a one-page weekly report recently made public by the Defense Nuclear Facilities Safety Board, a safety adviser based in Washington, D.C.

In the first incident, workers mishandled plutonium metals, in violation of federal regulations for nuclear safety, according to the report. In the second, just 11 days later, nearly a dozen workers were exposed to alpha particles, causing radiological contaminants to coat at least one worker’s knuckle, and to contaminate the other workers’ protective clothing and booties, as well as parts of the building. It is unclear how significant the contamination issue is for the workers’ health.

Kevin Roark, a Los Alamos spokesman, directed questions about the criticality safety event to the National Nuclear Security Administration field office in Los Alamos, which did not respond by deadline.

The incidents are among the most serious to have occurred at the lab in the last year or more, and come at a time when the lab’s ability to handle nuclear materials — and ensure the safety of its workers and the public — have been questioned by critical investigative reports, the federal advisory board and members of Congress.

The report indicates the first August incident is directly related to the production of plutonium pits, grapefruit-sized cores used to cause the fission reaction that triggers nuclear bombs. They are seen as a crucial part of the nation’s nuclear weapons stockpile, but the lab has yet to build a successful, military-ready pit.

The National Nuclear Security Administration has said the lab will likely need to build 80 per year by 2030 for “war-reserve-quality production.”

The report states that on Aug. 18, workers caused a “criticality safety event” in the casting room — where the shells that encase the plutonium pits are shaped — by placing a shell in an area that already contained plutonium metal, violating the limit for how much nuclear material can be in one place at the same time.

These limits exist because excess nuclear material can create an uncontrolled fission chain reaction, according to the International Atomic Energy Commission and the Department of Energy. The type of reaction can vary greatly based on the size and type of material, but if a sustained uncontrolled reaction snowballs, it can create the same effect nuclear engineers seek to achieve to create an explosion inside a nuclear weapon.

According to the report, workers did not discover that they had created a criticality event until three days later, when they went to move the shell. A second violation occurred when, instead of alerting management and evacuating, the workers first “conducted two additional nuclear material movements that they felt were necessary for product quality and security.”

Workers violated federal protocol, procedure and training for how to handle nuclear material, the report says, which resulted in a work pause for all casting operations. The involved workers also were “disqualified,” the report says, but it doesn’t specify what that entails.

Michael Golay, a professor of nuclear science and engineering at the Massachusetts Institute of Technology who has served on the U.S. Nuclear Regulatory Commission’s Research Review Committee, said he could not comment on the specific conditions at Los Alamos, but said nuclear criticality is of key importance at any nuclear facility.

“There are strict controls on how you use materials that can be involved in the neutron chain reaction. In particular, you don’t want to put plutonium or other materials that could have a fission reaction too close together,” he said.

“There have been accidents where people have created super critical assemblies and there have been injuries because of this, and death,” Golay said. “So it is recognized as very serious limits, and usually in a nuclear lab there will be all kinds of care taken to make sure this doesn’t happen.”

The lab has a long history of criticality events, including 23 such infractions during fiscal year 2016, which ended Sept. 30 of last year, according to a federal report made public in February. Out of two dozen nuclear facilities in the U.S., the Los Alamos lab was the only one to receive a failing grade for its criticality safety program last year.

The 2016 infractions were low-level, and one medium-level, criticality events. It is not known at what level of criticality the first publicly reported incident in August 2017 would register. By contrast, Sandia National Laboratories had zero criticality infractions last year.

Roark told The New Mexican in February that the lab had taken a series of actions to address issues in nuclear criticality, including training and adding new staff, and “implementing new and rigorous criticality safety controls.”

An investigative series by a Washington, D.C.-based journalism nonprofit Center for Public Integrity also found that in 2011, technicians at Los Alamos created a nuclear criticality “near miss” that could have resulted in a major accident or death when workers lined up rods of plutonium in a row to take a picture.

The rods were moved before a chain reaction occurred, but the incident triggered an near exodus of the nuclear engineers. The event ultimately caused the lab’s plutonium operations to shut down for nearly four years, only reopening in December 2015 with assurances that the program had resolved safety issues. The Center for Public Integrity found that government reports had criticized the lab’s management of plutonium for more than a decade, but few fines were levied.

On Thursday, outgoing lab Director Charles McMillan told lawmakers at a committee meeting that once the lab works hard on a problem, it does not recur.

“I know there are some who think Los Alamos works hard on a problem and then forgets about it,” he said. “That is not what you see in the data, but some of these problems take a decade to work off.”

McMillan added, “Both safety and security are work that is never done. … As a laboratory, we are constantly looking for ways to see how we can get better.”

But problems have been recurring, in part leading the Department of Energy to seek a new management contract for the lab.

Los Alamos National Security LLC, a consortium including the University of California, Bechtel National, BWXT and URS, an AECOM company, was told in late 2015 it would lose its more than $2 billion management contract of Los Alamos as a result of recurring management failures and accidents. The lab is expected to be under new management in September 2018.

A number of management changes already have occurred in recent weeks.

On Aug. 23, McMillan announced Scott Gibbs, a retired lab security division leader, would return to become the deputy director for mission assurance, a newly created position, effective Sept. 5. McMillan then announced in early September he would be stepping down as director by the end of the year. And this week, Kim Lebak, 53, manager of the National Nuclear Administration’s field office at Los Alamos, announced her retirement from the lab. She will be replaced by Steve Goodrum, who previously served as the assistant deputy administrator for stockpile management, which includes plutonium pits.

The August incidents are not the only accidents to occur at Los Alamos in recent months.

This spring, a small fire ignited at the plutonium facility, causing one worker to suffer second-degree burns. And in June, the lab improperly shipped plutonium out of state by airplane, though it was packaged for cargo truck — a violation of federal regulation that launched an investigation and resulted in the firing of a junior-level worker. A worker also cut through a main electrical line, suffering no injuries, the lab said, but causing a pause of electrical work there for several days.

In June, the Defense Nuclear Facilities Safety Board held a hearing in Santa Fe focused on the lab’s ability to handle increasing work related to plutonium pit production.

An official said the number of pits expected to be produced is unprecedented, and “at a level that the country has not done in some time. So there is a learning curve that we are all going to have to go through.”

In early August, U.S. Sen. Claire McCaskill, D-Mo., wrote a letter to the National Nuclear Security Administration, asking that it answer a number of questions about the lab’s fitness to operate safely, especially regarding pit production.

The agency is currently reviewing options for the future location of pit production, which will compare the prospect of future work at Los Alamos with other sites.