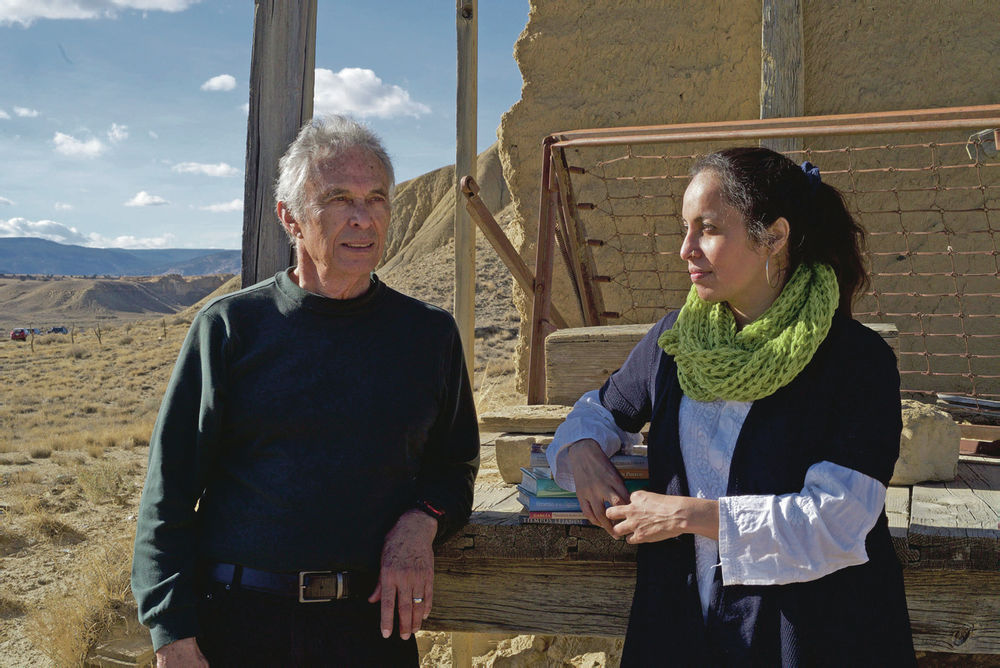 Folklorist and historian Nasario García and film director Shebana Coelho worked together on Nasario Remembers the Río Puerco, a documentary centered on stories García has written and collected from the people who once lived in the now-abandoned area along the river southeast of Chaco Canyon. Courtesy Kelvin DuVal 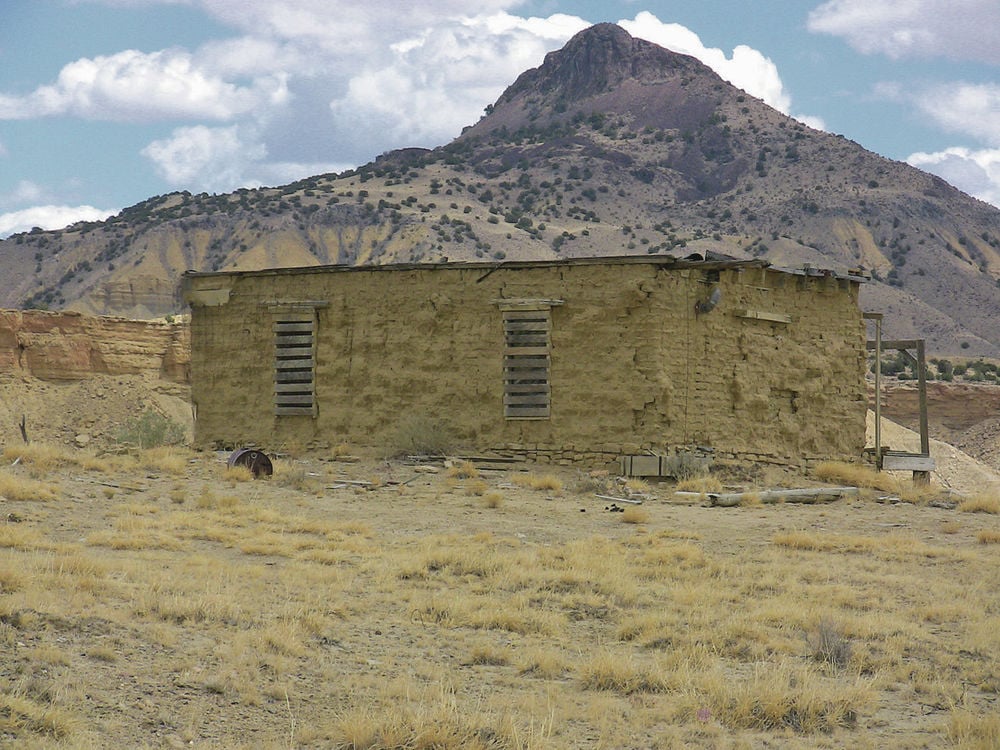 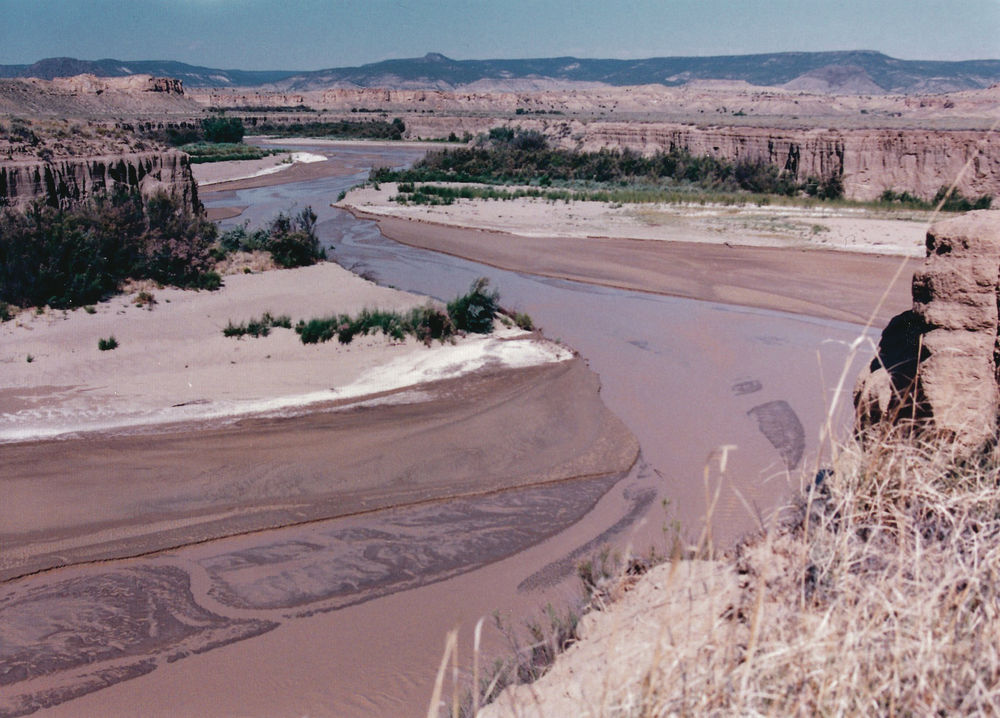 The riverbed of the Rio Puerco snakes through a valley 50 miles west of Rio Rancho. Villages once thrived here, and 80-year-old Nasario García, a folklorist who was born in Ojo del Padre, not far from where this photo was taken, keeps them alive through oral histories and written stories. Courtesy Nasario García

Folklorist and historian Nasario García and film director Shebana Coelho worked together on Nasario Remembers the Río Puerco, a documentary centered on stories García has written and collected from the people who once lived in the now-abandoned area along the river southeast of Chaco Canyon. Courtesy Kelvin DuVal

The riverbed of the Rio Puerco snakes through a valley 50 miles west of Rio Rancho. Villages once thrived here, and 80-year-old Nasario García, a folklorist who was born in Ojo del Padre, not far from where this photo was taken, keeps them alive through oral histories and written stories. Courtesy Nasario García

Once, by the Rio Puerco, a young Nasario García went for a ride with his grandfather, who was called Lolo. Across the arroyo, García saw a bear. He called out in warning.

They rode their horses across the arroyo to a thicket of berry bushes, not far from the watchful bear. Lolo picked two or three. “Try these,” he told his grandson. “They’re good, aren’t they? That’s why the bear comes here, and he comes here all the time.”

That is one of García’s recuerdos, or memories, from his early childhood days growing up near the Rio Puerco. For the first time, García, 80, of Santa Fe, a folklorist and historian, is sharing his Rio Puerco recuerdos on film.

On Thursday, García and film director Shebana Coelho will be at Collected Works Bookstore to preview clips from the documentary Nasario Remembers the Río Puerco and speak about his recuerdos.

The ranching villages near the Rio Puerco in the shadow of Cabezon Peak in Sandoval County emptied when drought dried the river and overgrazing spoiled the land in the 1950s. All that remains of the people who made their lives in the valley 50 miles west of Rio Rancho are crumbling ruins.

Some of García’s memories are commonplace: seeing his first bear or galloping through the village as a child, dodging the prairie dog mounds. Others veer into magical realism: a cousin, returning home from a date after curfew, having been clawed bloody by a bobcat but miraculously bearing no wounds. There were vibrant fiestas, marches and dances late into the night, where a boy was obligated by tradition to dance with his mother, grandmother and sisters before he could dance with anyone else.

His recuerdos share a common protagonist: the landscape. The stories belong to his village of Ojo del Padre and his stretch of the Rio Puerco Valley, its hills, its arroyos, its buttes, he says. The film “projects the past into the present, and hopefully into the future,” he says.

The idea for the film occurred to Coelho, who wanted to show the storyteller among the landscape, to hear García tell his stories where they are set.

“A storyteller can tell stories over and over again, and there’s something different in the telling,” Coelho says. “Nasario has spoken these stories, and he’s published them, but I realized there was a film because we haven’t seen Nasario on the land. That’s a different encounter. … What happens? For someone who listens, who doesn’t know the story, what does it wake up in you?”

Nasario Remembers the Río Puerco shows García wandering through the arroyos, the ruins and the memories lingering there. The film includes a series of García’s vignettes, Coelho said, as well as tableaus re-created with artifacts recovered from the dilapidated, disappearing homes.

“The feeling of the stories is so strong when you go to the Rio Puerco,” she says, “because there’s just enough left.”

Valley residents began abandoning their homes after a fire destroyed a wood-and-stone dam crucial for supplying the acequias, García says. Subsequent droughts didn’t help. His grandfather was one of the last to leave, he says, in 1958. Since then, the largely dried-out valley has belonged to ghosts.

There’s one story García hasn’t told often: At age 9, in 1945, when his family left their ranch by the river for Martineztown, an Albuquerque neighborhood, he was glad.

He didn’t think much of his valley until he went to Spain many years later for graduate study. On weekends, he and his wife would travel to the small villages in the Spanish countryside, where they saw the fiestas. “When I came back, I said to myself, ‘I’m going to talk to my grandparents,’ ” he said.

He wasn’t yet a trained interviewer or folklorist, but García considers that initial conversation with his elderly grandparents about the valley one of his career’s most illuminating. His curiosity was inflamed. “I wondered about all these people who used to live here,” he says. “Where are they? I started connecting dots, and I started interviewing them.

“The connection between Spain and New Mexico took me back to the valley,” he says.

Coelho found García when she heard him tell a story about his grandmother at Collected Works Bookstore. She approached him after the reading, and a partnership was born: Coelho adapted a book of García’s oral histories into a stage play, When the Stars Trembled in Río Puerco, which was performed in Albuquerque and Santa Fe in 2013 and 2014.

For the film about the Rio Puerco, Coelho and the filmmaking team are seeking donations through Indiegogo, a crowd-funding website, to finance the months of editing ahead. PBS has expressed interest in airing the film, Coelho says, and her dream is to premiere the documentary there during National Hispanic Heritage Month, which is celebrated Sept. 15 to Oct. 15.

“A kid raised his hand, and he said, with a straight face, ‘I go to Taco Bell once a week, and I buy a burrito grande,’ ” García says. “My heart fell down to my feet.”

García’s recuerdos can help stem that cultural tide, just as they preserve the spirit of a fading valley.

When García returned to the Rio Puerco to film a scene this past year, he came to the spot where he saw his first bear and Lolo told him not to fear. The berry bushes were still growing.

What: The Past is Present: Nasario Remembers the Río Puerco. Documentary preview and talks by folklorist Nasario García, filmmaker Shebana Coelho, poet Anne Valley-Fox and more.