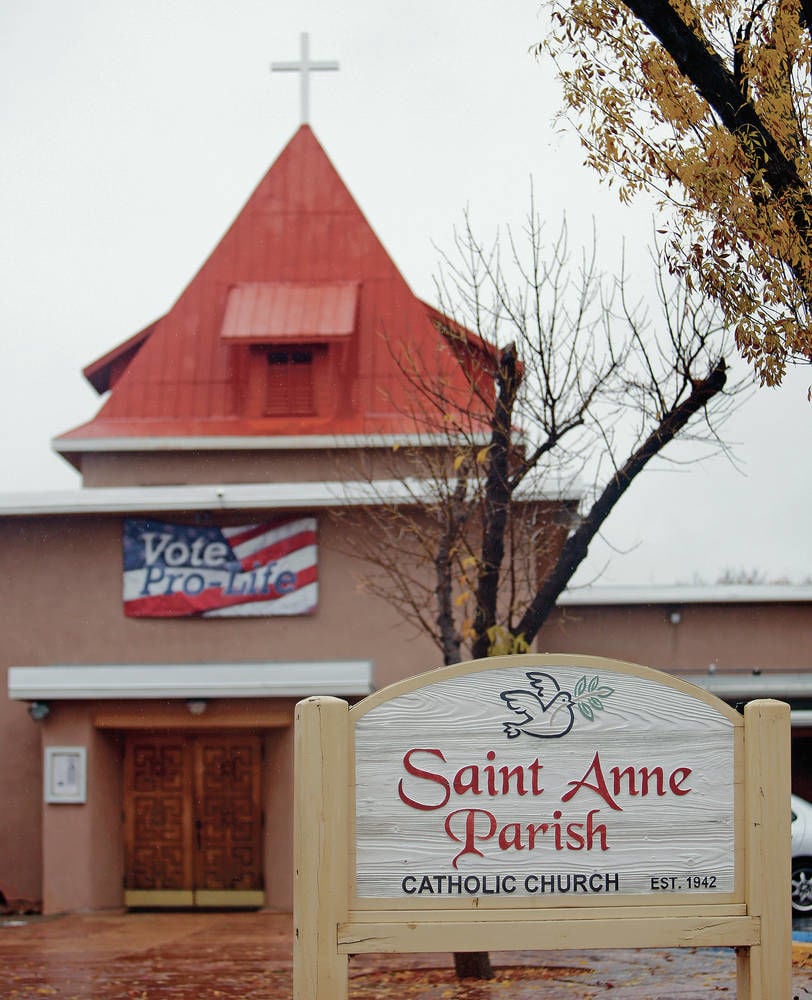 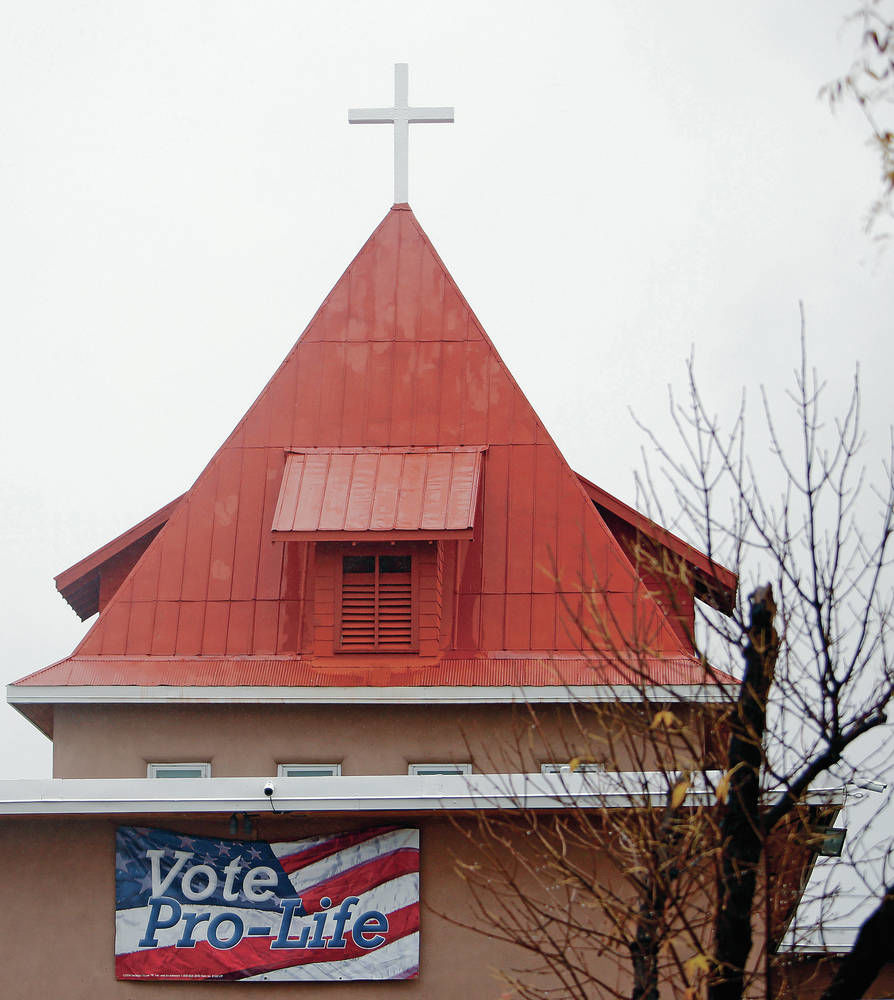 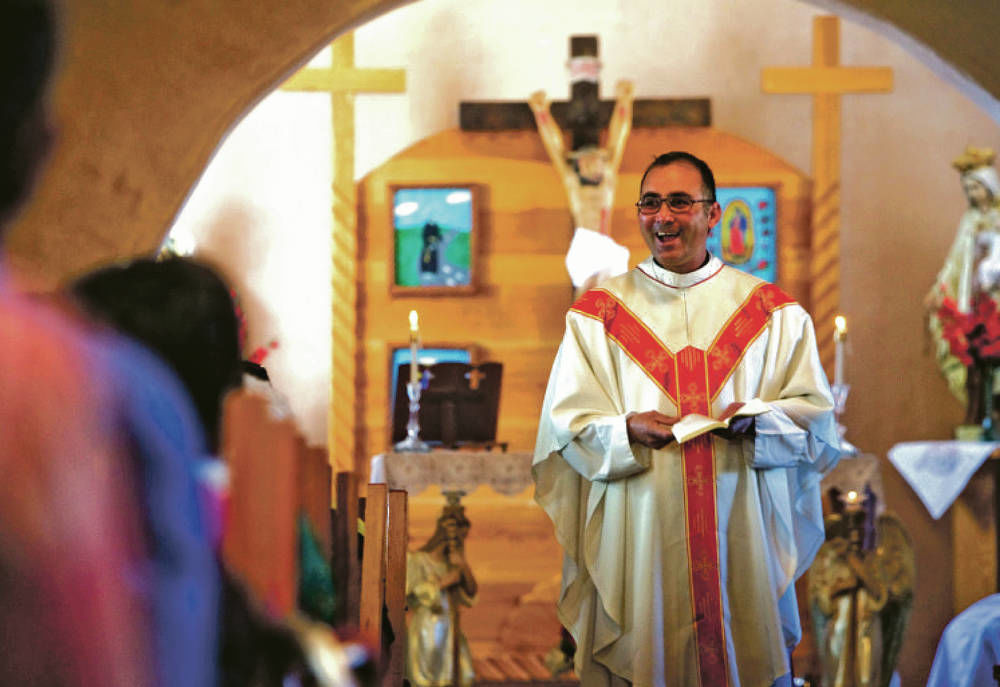 Once again, a Santa Fe Catholic church is encouraging parishioners — and anyone else who passes by — to “Vote Pro-Life.”

As November’s general election nears, St. Anne Parish on Hickox Street has a sign above its front doors with that plea, a recurring message at the church during campaign seasons.

Though nobody is disputing the church’s free-speech right to oppose abortion, some in Santa Fe question whether St. Anne Parish could be violating the doctrine of separation of church and state, and — because the church is a tax-exempt organization — whether it is violating IRS regulations.

St. Anne’s pastor, the Rev. Larry Brito, has a quick answer to such criticism: “We’re not violating the law,” he said Wednesday. “We’re not endorsing any candidates.”

Brito, who asserts the majority of his congregation supports his position, said he can’t be silent about what he calls a modern-day “holocaust.”

“If we were standing up for immigrants, nobody would complain,” he said. “But when we stand up for others who have no voice, the 4,000 children a day who are killed by abortion, they complain. It would be a great disservice to be quiet during this holocaust.

“People criticized the Church for being silent during the Holocaust during World War II,” he added. “But now they want us to shut up.”

Brito said Planned Parenthood — a women’s health organization he has called “evil” in the past because it offers abortion services — also is a nonprofit organization. “And nobody complains about them,” he said. “And they do endorse candidates.”

Planned Parenthood, like many nonprofits and businesses, endorses and financially supports candidates through political action committees organized for that purpose.

On the national level, there’s the Planned Parenthood Action Fund. But the organization also is affiliated with various state PACs.

She told The New Mexican, “The Catholic Church does not endorse any candidate. The Archdiocese of Santa Fe complies with the United States Conference of Bishops’ official statement, Forming Consciences for Faithful Citizenship. Catholics need to study the issues and make their decisions for the common good in accordance with Catholic teaching.”

Two years ago, after Brito had sent a controversial letter to parishioners with a more pointed political message, Radigan said the pastor might have overstepped the Catholic Church’s policy.

The priest, in a letter issued about a month before the 2016 general election, blasted Planned Parenthood for performing abortions and singled out the “one candidate who has been endorsed by this evil organization and has proudly embraced their endorsement.”

That “one candidate” was Hillary Clinton, the Democratic nominee for president, who had received backing that year from a political action committee associated with Planned Parenthood.

“Father Brito may have neglected to reiterate some important elements and elaborated more on others,” Radigan told The New Mexican in 2016.

Eight years earlier, St. Anne Parish faced similar criticism for hanging a 10-foot-long banner on the side of its building, saying, “Vote Pro-Life.” That sign, like the smaller one now hanging on the church, avoided mentioning any candidate by name.

No official action has ever been taken against St. Anne for publicly advocating for people to “Vote Pro-Life.”

But some critics contend the church could be breaching the rules.

They point to a 2007 IRS publication that provides guidance on what type of advocacy nonprofits can engage in without risking their tax-exempt status.

The publication says that “organizations must avoid any issue advocacy that functions as political campaign intervention. … A statement can identify a candidate not only by stating the candidate’s name but also by other means such as showing a picture of the candidate, referring to political party affiliations, or other distinctive features of a candidate’s platform or biography.”

Key factors in making that determination, according to the IRS, include how closely a campaign message is to the election.