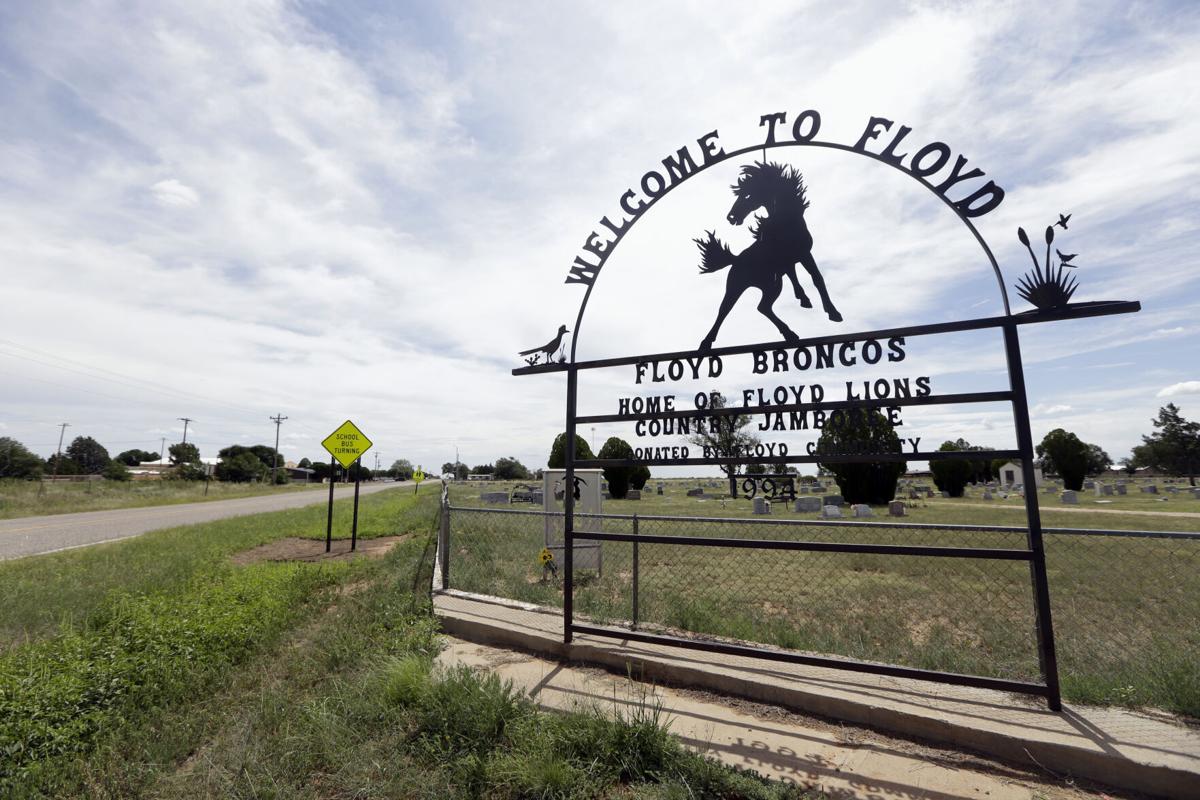 A sign welcomes visitors to Floyd, a small town in the eastern part of New Mexico near Portales.

Few politicians have experienced as much pain this year as one Jeff Essary. He inflicted much of it on himself.

Gov. Michelle Lujan Grisham’s administration in early August suspended Essary from the school board in the tiny Eastern New Mexico town of Floyd. He and the other four board members had refused to comply with a public health order requiring kids to wear masks in school.

Two weeks after his removal from office, Essary became grievously ill with COVID-19. He needed a long stay in Roosevelt General Hospital in Portales to recover.

Essary had declined to be vaccinated and said he didn’t believe masks were effective in stopping the spread of COVID-19. After rejecting these precautionary measures, he publicly lambasted the quality of care he received from the hospital staff.

Essary said he was wrong on that score. His COVID-19 infection was so severe he couldn’t breathe. Panicked, he said, he unfairly lashed out at the medical staff.

“My situation was quite advanced and is scary,” he wrote to me while hospitalized.

As he recovered, Essary sought his old seat on the board of the Floyd Municipal Schools, enrollment 230.

He lost the election this week to Kenneth Reed by a count of 85 to 29, according to the Roosevelt County Clerk’s Office.

Essary didn’t return my calls about his defeat. Reed wouldn’t comment on whether Essary’s defiance of the state health order was a factor in their race. Reed also declined to discuss his own position on the state mandating masks in schools.

Essary was the only ousted school board member from Floyd to lose in Tuesday’s election. Two others who were removed from office by the governor’s administration were victorious.

The other two Floyd board members who were suspended by the state weren’t on the ballot this year.

Floyd, for now, doesn’t have a school board. Stan Rounds, a veteran school superintendent, is overseeing the district’s administrators under a makeshift system devised by the state Public Education Department.

But Floyd’s newly elected school board members will be seated upon their swearing in, scheduled for Jan. 1.

Rounds and PED staff members will help them with the transition to a fully functioning school board. This will include “creating and maintaining a safe school environment for students, educators and families” in the COVID-19 era, said Nora Meyers Sackett, the governor’s press secretary.

“Should the newly formed board once again fail to adhere to the state’s public health and safety requirements, PED will again suspend school board governance,” Sackett said.

When the new board takes office, Democrat Lujan Grisham will be accelerating her 2022 reelection campaign. Her staff’s ouster of the Floyd school board will be a campaign issue for the eight Republicans jockeying for the nomination to oppose Lujan Grisham in the general election.

One of them, Louie Sanchez of Albuquerque, said Lujan Grisham interfered with a duly elected school board that intended to leave decisions about masks up to parents.

Advocating for local control and unchallenged parental authority might be effective planks in a platform for the Republican nomination. They won’t work well in a general election.

About 1,600 new cases of COVID-19 were reported Thursday in New Mexico. That was an increase of more than 400 from the previous day.

Kids and employees in the even smallest school districts can’t be fenced in. Going unmasked can be a parental or individual decision that endangers other families, especially as infections increase.

Essary said COVID-19 made him so sick he was afraid for his life. But he wrote me from his hospital bed he had not changed his position on state mandates.

“I still hold fast and true to my stance. It should be up to the individual, parent or guardian of children on how we go about [COVID-19’s] handling. I still don’t personally believe in the vaccine or masks as a prevention, but if that’s the way you feel, that is your right as an American.”

Red, white and blue individualism in a pandemic might sound reasonable to some. In truth, it puts innocents at risk.

Parts of New Mexico are without running water. Impoverished kids in the bigger cities often are shifted from couch to couch, having no consistent place to live. People living in those dire conditions are far more vulnerable than adults who claim personal choice should rule in a pandemic.

If rancher and rebel Jeff Essary can contract COVID-19 in a small town, what are the odds of infection for classrooms full of kids who are shuffled from home to home?

Floyd might be a rallying cry for many politicians. Essary’s story is something more important — a cautionary tale.

This sounds like things are working out for him as they should. Thoughts and prayers.

Be sure, from grade-school, to the USAF, to the Broadcast and Music industries, and beyond, I've learned a simple Truth: Many people will resist when they ORDERED to do something. In many cases, simply, because they were ORDERED. Personally speaking, my late, beloved Pop went to his Heavenly-home - taking with him any ORDERS that I would ever follow. Since I'm neither a dog (nor a basic-training recruit), no human-being under ANY "Color-of-Authority" will ORDER me. Respectfully, ask me to do something and I will gladly take your request under consideration. Order me? At-best, you'll get nothing.

Man, as the greatest of Almighty God's creations (and "slightly lower than angels") was given the gift of Free Will - unlike any other Creation. So naturally, when you have a confirmed deceitful and wholly-corrupted "Government" -under whatever guise- attempting to nullify a God-given gift, there will be serious push-back. Especially, when the aforementioned wicked "Government" funded the source (See: Wuhan Clinic) of a global pandemic. Hence, a fast-fading "Government" has merely begun to reap what it has sown.

Now, for The Greater Good, I'm compelled to wear a mask, sanitize often, and love my neighbor from six-feet away.

Vaccine? Keep your hands off my body - and the bodies of the innocent unborn.

Oh, David, it's all "religion" -- secularists, too. You can't outrun human fallibility by blaming what you and Hitchens (such a smug guy) call religion. Eric Hoffer named it: TRUE BELIEVERS. And some "rationalists" are among the worst, but we all slip in that direction from time to time.

Emily nailed it, below. These terrible times are not caused by a lack of ideological alignment on religion or anything else. Our inability to transcend "beliefs" and to be joined in our common humanity is debilitating. Floyd is a wonderful place and Stay Rounds is a stellar educator.

I've been wearing a mask, sanitizing and social-distancing since late February 2020, and I gifted family-members with custom masks. Your consistently weak and broad generalizations no longer amuse me.

Well said Hermano. And those of us who have been in the military, or had to suffer from other government incompetents and government edicts with no rational basis in facts and science have learned not to trust government, since it is really just politicians, and we should know what kind of people they are by now. In fact, if you look at the data, public trust in government is near an all time low, only about 24% say they can trust government, so when ordered by government (really corrupt politicians or their hacks), what do you think will be the result. Check out this data, it is interesting how it varied over the decades, and when various Presidents (politicians) were in power.....and by generations....https://www.pewresearch.org/politics/2021/05/17/public-trust-in-government-1958-2021/

Brother Mike, you been so honorable -and humble- about your service during Vietnam. Thank you again Dr. Johnson for your service - before and after your military duties. Again, I salute you.

Sorry—-the sound of the smug and the righteous patting each other on the back was drowning out common sense and science.

I do not engage in this type of personal and ugly commentary, Prince:

Nor should you. I believe (not condescend) we are all equally God's beloved children. Yep - you, too.

Your response to comments, like this one to me, "your usual vapid and smarmy condescension " do not facilitate discussion.

If Essary really had his money where his mouth is, he would not have gone to the hospital--he would have kept his "freedom" to suffer at home and allow that bed he took up for some time to go to someone who believes in science and is grateful for medical care. What an a**

Says it all: such "individualism" does, as you say, put innocents at risk.

This is a case of willful and potentially dangerous ignorance induced by poor political decisions. Believing in “freedom” does not not entitle someone to become a modern day Typhoid Mary and vector for spreading disease. Pre-Donald Trump this would have seemed obvious to anyone but the most fanatical. And this guy was on the school board? Sad.

The other story is removing a publicly elected board, the way they handled this is wrong, they could have forced the mask mandate without removing the people representatives. What would we say if Biden removed MLG and her appointed staff and put someone from Washington in to rule the people. The state would be up in arms. The governor needs to put the sledge hammer down and use persuasion this is still a democracy not a dictatorship.

Probably because they would have pulled a "DeSantis".

It is sad and pathetic that being willfully ignorant, for individuals and a party, is a badge of honor anymore.

Your "sad and pathetic" labels sound more than a little wokey to me. No under the D's got their head handed to them in VA.

Don't forget NJ Senate Pres. got unseated by a Republican truck driver for $153.00

Richard, is it credible that someone who says he "stands fast and true" over masks after he put the hospital through all that expense and effort to save his life, could be persuaded of anything?

There was other democratic options, put the issue before the voters of Floyd to remove the board or change their stand. During 9-11 and this Pandemic we have lost our rights little by little and once we had Al Qaida defeated we did not get those rights back. I would rather look for every possible way the voters control this situation then the heavy hand of government.