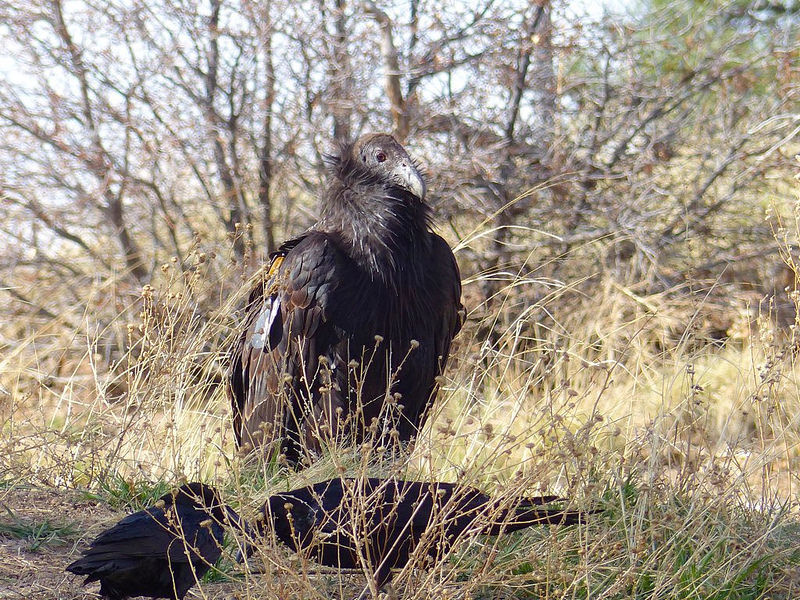 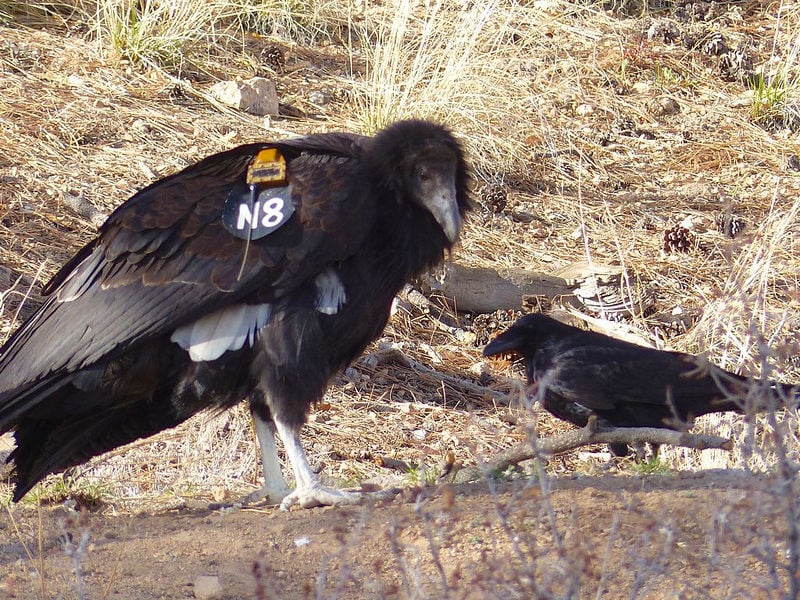 Los Alamos birder Joe Fitzgibbon drove more than a day to the North Rim of the Grand Canyon recently looking for the California condors released there. He didn’t see one.

Instead, one landed in his backyard on Friday. “I didn’t recognize it at first. It was huge,” Fitzgibbon said. “I was flabbergasted.”

It was likely the first condor spotted in New Mexico since before recorded history, according to Fitzgibbon and Bob Parmenter, scientist at the nearby Valles Caldera National Preserve in the Jemez Mountains.

Fitzgibbon knew the bird wasn’t one of the many turkey vultures he sees during the summer because it didn’t have a red head. He saw a large N8 radiotransmitter tag on the bird’s wing and knew it had to be a condor.

Other birders had spotted and reported the same condor earlier at Navajo Reservoir and at Mesa Verde before that. “That’s why the tag has such a big number so people can call in and report when [they] see one,” Fitzgibbon said.

Fitzgibbon called the nonprofit The Peregrine Fund, a conservation group devoted to restoring the condors since 1996, and other raptors. The group is monitoring 70 condors currently in Arizona and southern Utah. They had released N8 in the Grand Canyon. In February, they lost track of the bird and feared it was dead, Fitzgibbon said.

The condors are raised by people at The World Center for Birds of Prey in Idaho before they are released in the wild. The Peregrine Fund is concerned about how well each bird adjusts. “They don’t want them hanging around people,” Fitzgibbon said.

The condors range once extended across much of North America. But by 1982, only 22 condors survived, according to The Peregrine Fund website. Now there are an estimated 400 in the wild or in captivity. The species remains “critically endangered,” according to the website.

Condors can have a wingspan of 9.5 feet and can live

50 years or longer. Male and female condors look alike and they feast on animal carcasses. Lead poisoning from eating the remains of wildlife shot with lead bullets remains the biggest threat to the bird.

The visiting California condor stayed at the Fitzgibbon yard for about half an hour, harrassed by ravens until it finally gave up on a meal and left, Fitzgibbon said.

Valles Caldera National Preserve scientist Bob Parmenter said it’s possible visitors will spot the condor if it sticks around. “It will be considerably larger than the ravens, hawks and eagles that we usually see on the Preserve,” Parmenter said.

What a nice surprise. I saw a number of condors last November at the "condor viewing area" in the Vermillion Cliffs, not far from Page. They were being trapped by biologists to be treated for lead poisoning. Hope they thrive here.

It is my understanding that NM hunters still use lead shot. If N8 is to survive, he might want to find a different state to inhabit. May he remain safe and protected.