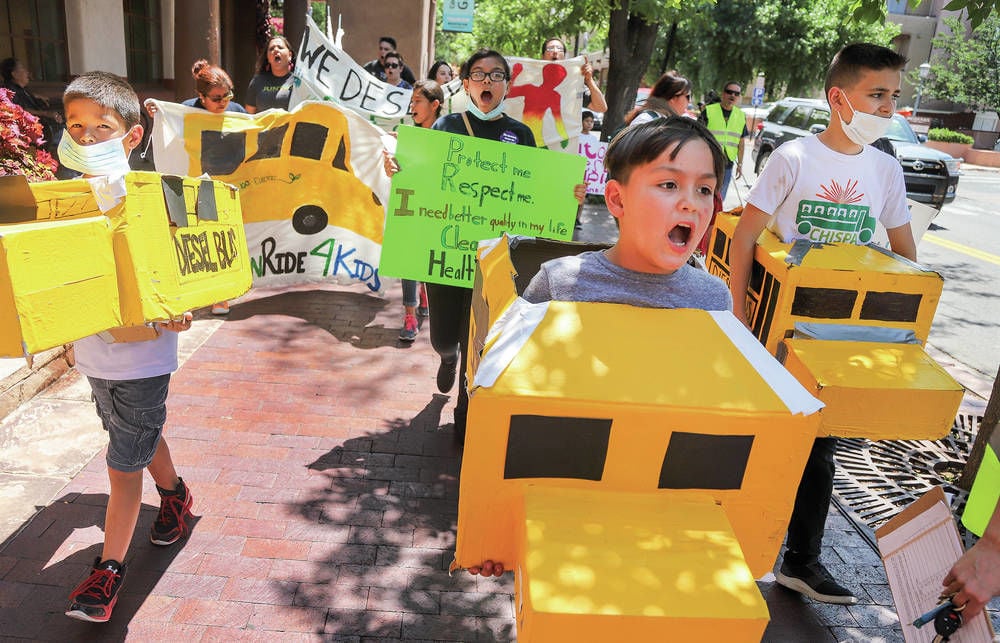 Luis Perea of Phoenix heads a group of children dressed as diesel buses and supporters of the Clean Buses for Healthy Niños campaign from the Santa Fe Capital to the Santa Fe Convention Center on Thursday. The group was calling for governors to fund and implement plans to invest Volkswagen settlement money into electric school buses. Gabriela Campos/The New Mexican 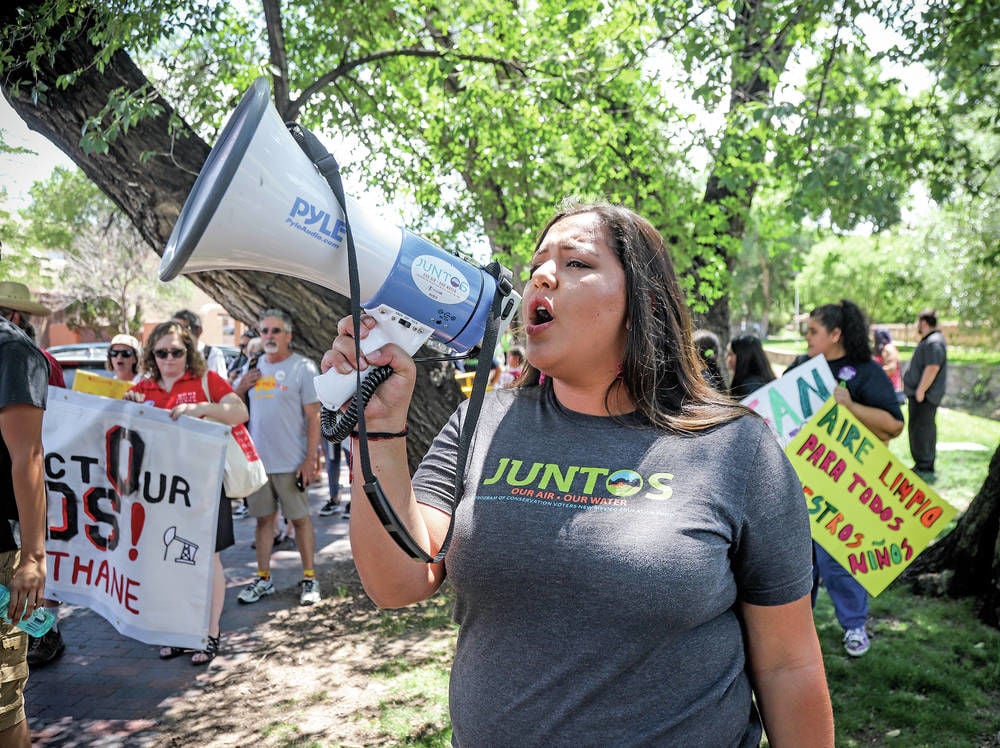 Luis Perea of Phoenix heads a group of children dressed as diesel buses and supporters of the Clean Buses for Healthy Niños campaign from the Santa Fe Capital to the Santa Fe Convention Center on Thursday. The group was calling for governors to fund and implement plans to invest Volkswagen settlement money into electric school buses. Gabriela Campos/The New Mexican

Maybe three years ago, the protest flyer wouldn’t have been so crowded.

Maybe there wouldn’t have been a flyer at all.

The roster of organizations taking part in a progressive protest and march Friday — from the state Capitol to a downtown gathering of state governors from across the nation — has ballooned in recent days, said Jeff Haas, a Santa Fe civil rights lawyer and activist.

“I’ve been revising the flyer every day to add an organization,” Haas said. “We have hardly any more room.”

The enthusiasm to march and speak out, said rally organizers and group leaders, reflects the political reality for many in 2018: The people are fed up.

The colored Sharpies and card-stock posterboards are always ready to go.

And the National Governors Association conference here this weekend is the sort of national platform that doesn’t often make itself available in New Mexico.

Dozens of progressive groups from across the state have signed up for the Step Up or Step Down rally Friday — a march from the Roundhouse to the Santa Fe Community Convention Center, the primary venue for NGA conference events, where protesters and organizers will call on the nation’s governors to take steps to address a litany of woes afflicting the impoverished, the vulnerable, the environment and more.

It’s a broad, catch-all message the marchers plan to deliver outside the building housing the state leaders. Provide health care as a right, they’ll say. Guarantee unions’ right to organize. End gerrymandering. Control the flow of guns. Call off Immigration and Customs Enforcement and agents’ harassment of vulnerable families at the border.

Washington, D.C., has abandoned the people, Haas and others said, which leaves governors and state-level legislation as the only path forward in the era of President Donald Trump.

“The federal government is certainly no longer part of the solution,” Haas said.

The protests Friday come on top of a 125-person show of activists and students who on Thursday urged governors to put $2.7 billion in environmental remediation funds from Volkswagen toward replacing diesel school buses with electric buses. The carmaker forked over the money as a result of its 2015 emissions scandal.

“Over the last eight years, our state has been running in the wrong direction — weakening oil and gas air quality requirements at a time that we need stronger standards,” said Celerah Hewes, a New Mexico mother, according to a news release. “New Mexicans deserve better. Our children deserve better. All Americans deserve reasonable clean air protections at the state and federal level that reduce pollution.”

The spectrum of support that has materialized for the Friday protest, meanwhile, speaks to both a compulsion to express the generalized fear and loathing many feel in the Trump era and the rarity of a big-ticket platform popping up in New Mexico, participating group leaders said in interviews Thursday.

“It’s an audience we don’t normally have,” said Miranda Viscoli, co-president of New Mexicans to Prevent Gun Violence. “It’s a huge opportunity. Gun violence is a perfect example of this: Governors can call those bills, can pass those bills. A lot of them aren’t. But I think it’s a great chance for causes to get out there and tell the governors that they need to start getting their act together when it comes to our country.”

Ellen Bernstein, president of the Albuquerque Teachers Federation, echoed the sentiment as it pertains to the ability of states to attract, retain and support public educators.

“We’re not being held hostage by the federal government and No Child Left Behind anymore,” Bernstein said. “Our state chose to create the same oppressive environment — high-stakes testing and blaming teachers. But governors have the chance to revitalize the teaching environment, regardless of who Trump appointed as his secretary of education.”

The state-centric theme of the protest echoes the message to be issued by Democratic governors at a news conference scheduled for early Friday.

The Democratic Governors Association in a release Thursday touted state-level leadership as “the first line of defense against damaging policies from Trump’s Washington, a right-wing judiciary and Republican gerrymandering.”

The Step Up or Step Down protest is not specifically tailored for Democratic governors, Haas said, although the subjects on the speakers’ agenda are “what a progressive coalition would demand.”

“Obviously we would also like to expose the Republican governors who are cutting Medicaid in their states, cutting funds for education, cutting workers rights,” he said. “We’re probably not going to get them to change their minds, but maybe more people will realize the programs and laws they’re passing are really hurting working people.”

The march will begin at 10 a.m. at the Capitol. Haas said he can’t be sure how many people to expect because it is a workday.

But the overall expectation of the value of a protest in 2018 is higher than in recent times, he said.

A few years ago, he said, “It might have been harder to say: ‘Are you willing to come out and protest?’ You might say, ‘Oh, that’s an old tactic, and things aren’t so bad.’

“But now it seems like the reception to the idea of confronting the governors has been really strong,” he said. “I see it as an opportunity to bring organizations together to show certainly a local audience and what may be a national audience what we think about Trump and how we’re stepping up.”