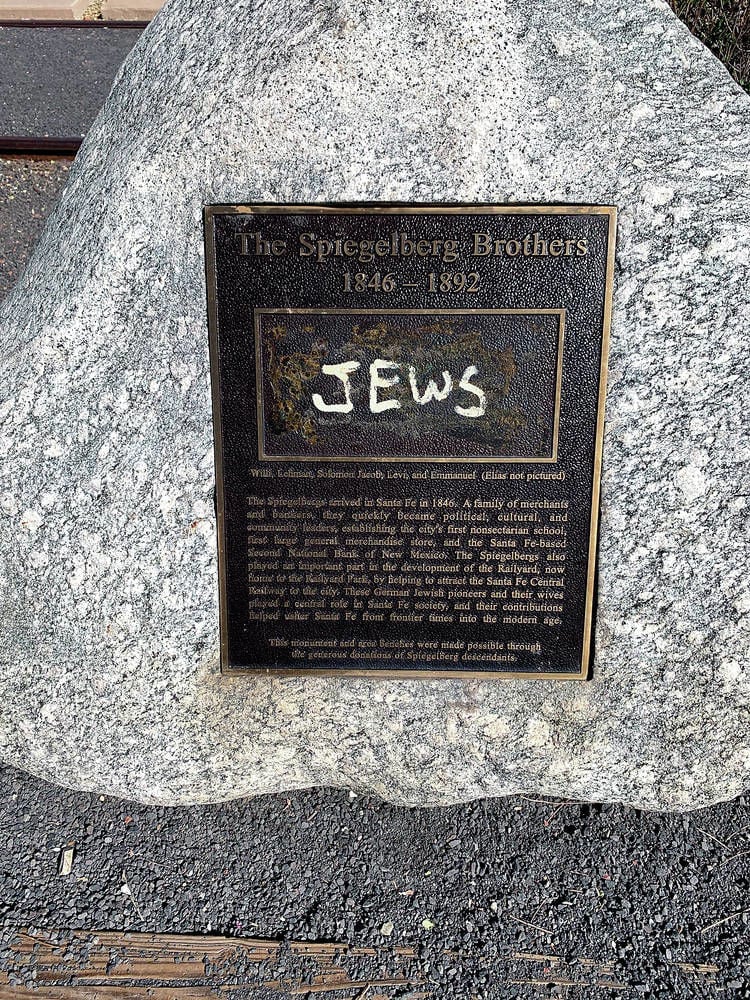 City workers on Tuesday rushed to remove the word “Jews,” scrawled in white paint, from a plaque honoring the Spiegelberg brothers, six German Jewish merchants, bankers and community leaders who helped transform Santa Fe from a frontier outpost to a modern city in the mid-1800s. Courtesy photo 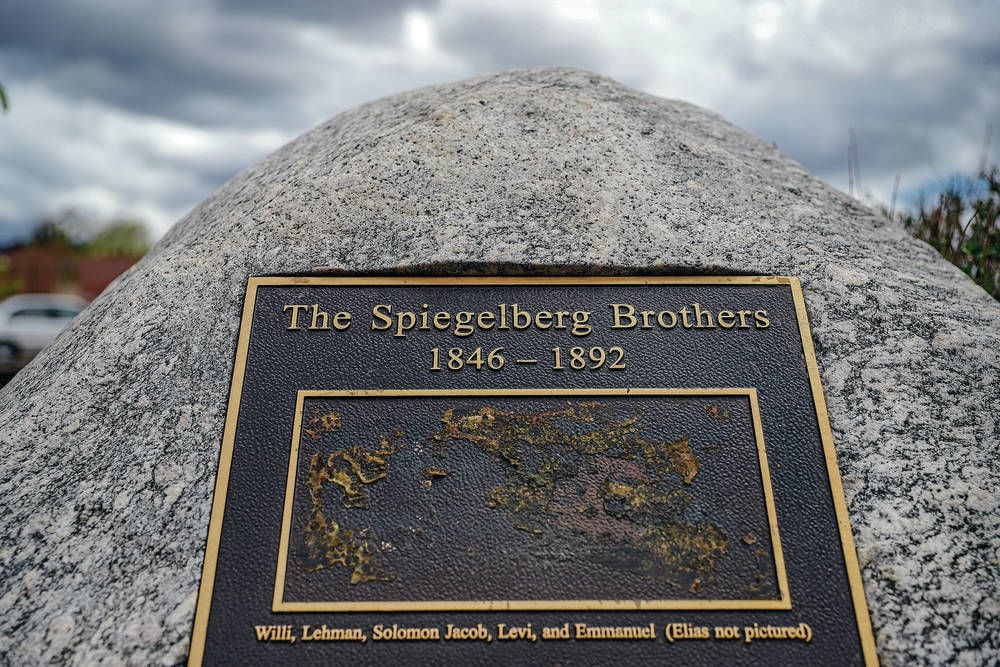 A plaque in Railyard Park honors the Spiegelberg brothers, six German Jewish merchants, bankers and community leaders who helped transform Santa Fe from a frontier outpost to a modern city in the mid-1800s. The word “Jews” painted on the plaque was removed recently by city workers. Gabriela Campos/The New Mexican

On a rock in Railyard Park, a message of intolerance.

City of Santa Fe Parks and Recreation Department workers on Tuesday rushed to remove the word “Jews,” scrawled in white paint, from a plaque honoring the Spiegelberg brothers, six German Jewish merchants, bankers and community leaders who helped transform Santa Fe from a frontier outpost to a modern city in the mid-1800s.

The act of vandalism might have been the first recorded incident of anti-Semitism in Santa Fe in 2019. But according to a report released Tuesday by the Anti-Defamation League, it follows a year of heightened intolerance in New Mexico.

The league, a New York-based organization that tracks anti-Semitism and other acts of hate throughout the United States, logged eight acts of anti-Semitism in the Land of Enchantment in 2018 — incidents that created what the Anti-Defamation League’s leaders described as one of the worst years on record.

The report comes days after the second synagogue shooting in six months shocked the nation. One woman died and three more were injured, authorities say, after a 19-year-old man opened fire Saturday in the foyer of Chabad of Poway, a synagogue near San Diego.

A snapshot of the incidents in New Mexico in 2018: In February, a group of people told a Jewish university student that victims of the Holocaust deserved their fate. In August in Santa Fe, a synagogue was vandalized. Someone drew a Star of David with a line through it on a highway overpass in June.

The incidents were culled from a combination of police records, news media stories and victim reports, with each incident vetted by Anti-Defamation League staffers.

Santa Fe Police Department spokesman Greg Gurulé said officers are in the process of reviewing security cameras to determine who might have defaced the Railyard Park plaque.

A photograph also appeared to be missing from the plaque, though Tim Rogers, the trails program manager with the Santa Fe Conservation Trust, which oversees the park, said it’s possible the photo had been missing prior to the vandalism.

For the leaders of Santa Fe’s Jewish community, the vandalism, combined with the recent spike in anti-Semitic incidents, is indicative of a larger trend.

“This act is just a symptom of the wave of intolerance that is sweeping across this nation, particularly in the last few years, stoked by inflammatory rhetoric from the highest office in the land,” said Rabbi Neil Amswych of Temple Beth Shalom.

Anti-Defamation League data shows a spike in anti-Semitic incidents in New Mexico beginning in 2015 and peaking in 2017, when the organization logged 15 incidents in the Land of Enchantment.

The eight incidents that occurred in 2018 represent a decline, but Scott Levin, director of the Anti-Defamation League’s Mountain States Region, which includes Colorado, New Mexico and Wyoming, said the new numbers still are “very elevated” — a trend mirrored on the national level.

“There’s been an emboldening of those people that are haters out there, that seem to take comfort in the rhetoric that’s been going on in the past few years in all levels of government and society,” Levin said.

Still, for Amswych, despite the spike, diversity always will have a leg up on intolerance.

“Whether it’s immigrants and asylum-seekers, members of the LGBTQ community, Muslims, Jews or anyone who doesn’t fit a supposed norm that in reality only exists in the minds of the ignorant, the attempt to marginalize communities will always fail because diversity strengthens us,” he said.