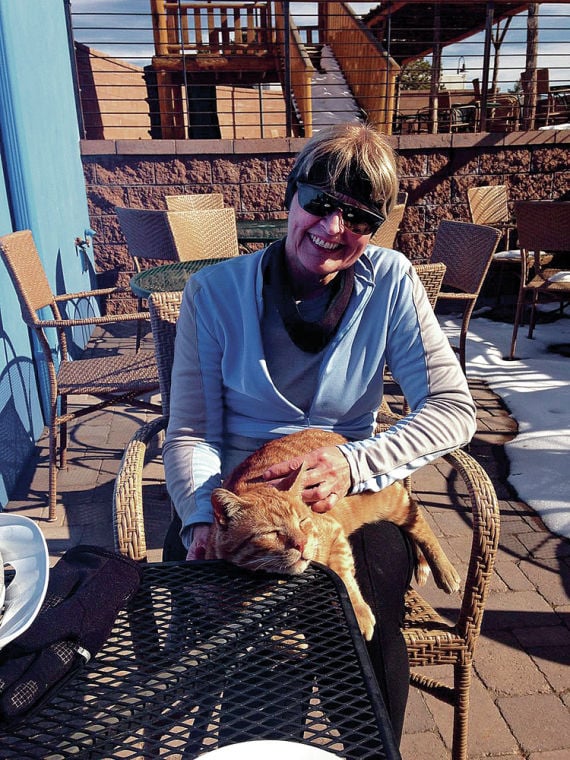 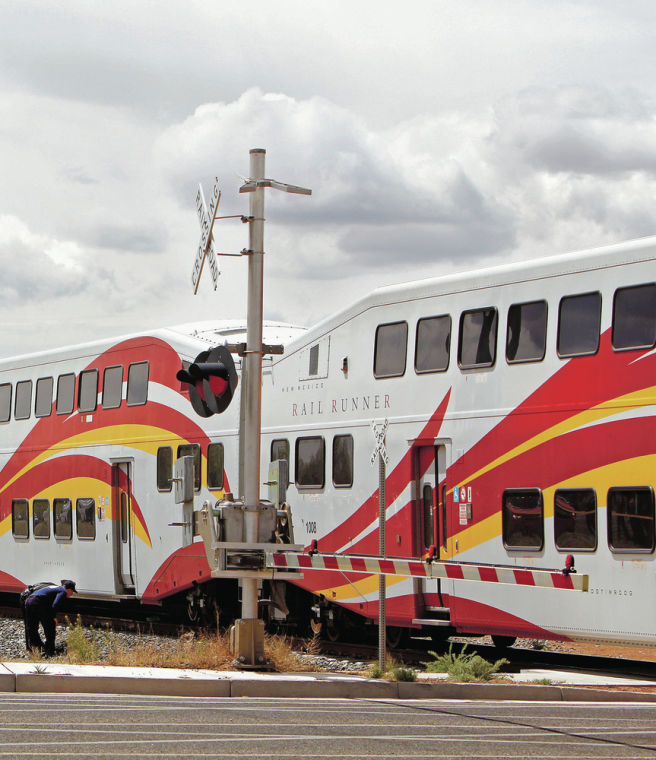 Security arms block vehicular traffic at the Zia Road crossing, but they do not prevent cyclists or pedestrians from continuing onto the tracks. New Mexican file photo

Security arms block vehicular traffic at the Zia Road crossing, but they do not prevent cyclists or pedestrians from continuing onto the tracks. New Mexican file photo

Suzanne LeBeau was an experienced bicyclist, say neighbors and friends, and they and cycling advocates don’t understand what led the Santa Fe woman to ride in front of a Rail Runner Express passenger train at the Zia Road rail crossing, where she was struck and killed Saturday morning.

And while the signals were operating at about 11 a.m. Saturday and the train’s engineer sounded a horn several times, police said, LeBeau rode onto the tracks and was hit by the train. She died at the scene.

Santa Fe police Lt. Andrew Padilla told a reporter at the scene on Saturday that a witness said the woman was wearing earphones. A final police investigative report on the incident was not yet available on Monday.

Tim Rogers, an avid bicyclist who helped draft the city’s bicycle master plan, said he worked as the bicycle and pedestrian coordinator with the New Mexico Department of Transportation as the rail trail was being built in 2007. He said state officials deemed the flashing lights, bells and guard arms at the Zia Road crossing as adequate warning for pedestrians and riders on the trail, as well as for nearby motorists.

“Up until now, it’s been OK,” he said. “But signage can only do so much. I think everyone would agree that it would be safer if it had a dedicated gate for trail users.”

New Mexico Department of Transportation officials said in an email “it’s a standard configuration” to have the road blocked by security arms but not nearby trails.

LeBeau, according to neighbor Charles Cole, was an enthusiastic bicyclist who often rode to locales such as the villages of Galisteo and Cerrillos, or who would drive to Albuquerque and cycle all day there. She was a good neighbor, Cole said, adding that she was the type of person who would strike up conversation or pick up newspapers and mail for neighbors on vacation.

Cole said he saw LeBeau riding her bicycle in the neighborhood’s cul-de-sac the morning before she was hit. She was wearing her helmet, he said, and he thought, “I wonder how far she is going today?”

Cole said LeBeau preferred open roads rather than riding in the city.

Stephen Newhall, a manager at the local Rob and Charlie’s bicycle store and an active cyclist, said he frequently rides on the portion of the Rail Trail where Saturday’s collision occurred. He said vehicular traffic at the intersection is a concern, but he hasn’t had issues with the trains.

He said the crossing gates and other warning signals are activated a while before the train arrives and that if LeBeau was traveling northbound on the trail, she would have been able to see the southbound train unless something distracted her.

Newhall said some bicyclists might be lulled into a false sense of security while riding on a bike trail.

“A lot of people think, ‘I am on the bike path, I am safe,’ ” Newhall said. “You still have to pay attention.”

Rail Runner spokeswoman Augusta Meyers said a train’s engineer has few options available in such situations. He or she can sound the horn and activate an emergency brake. But even then, Meyers said, it takes the train between a quarter of a mile and half a mile to stop. She said the train probably was traveling about 30 mph before the collision.

Meyers said the train was equipped with surveillance cameras and that local law enforcement have access to the footage. She added that investigators sometimes require drug tests for train staff after an incident, but they did not after Saturday’s accident. An engineer involved in such an incident, Meyers said, is given a chance to take three days off work and access to counseling.

LeBeau had worked for several years as a building manager at the Coronado Building downtown on East Palace Avenue, said Greg Gonzales, director of development with Branch Design and Development. When Branch bought the building a few years ago, they kept LeBeau on as a consultant, Gonzales said, adding that she was the “ultimate professional” and a detail-oriented person.

According to a death notice published in Monday’s New Mexican, details regarding a memorial service for LeBeau are pending and anyone wishing to leave a message for the family may do so at forsuzanne.com. Family members declined to speak to a reporter on Monday. Cole said LeBeau was preceded in death by her husband and is survived by her mother and two sisters who live in the area.

Note to all. In today's New Mexican is an article that states that there were no earphones found at the scene, which is what Suzanne's sisters have been telling us as well. One sister speculated that the witnesses who claimed there were headphones may have seen a headband.

I would back down on that early speculation, which was never confirmed but tends to reinforce our prejudices about inattention. I've seen enough walkers, joggers, and cyclists that do use these, but that doesn't mean LeBeau did.

We won't ever know everything. Best lesson learned on this one is to always be careful, and have your soul's paperwork in order just in case.

Texting, listening to music and riding a bicycle do not make for safe travel.

Should these be required, see figure 76.

Those are the sorts of options that are available. NMDOT apparently has made the decision not to use them.

I don't think such equipment should be everywhere. Just not cost effective. But someone ought to reevaluate whether we should spend the bucks in busy urban crossings.

Might this have been avoided if the Zia station was open?

Yes. No. Maybe. But other tragic incidents "might" have happened "if" the Zia station had been operational. It appears she had a date with destiny, undeterred by already sufficient warning systems.

It's a tragedy. My deepest condolences to the family.

We can't as a society, implement every possible safety feature ever created or dreamed of to protect people in every conceivable situation.

People simply HAVE to be personally responsible for themselves. Americans are already WAY to coddled.

There were a lot of warnings...sounds, lights, etc...but even if NONE if those existed, who crosses a street, train track, etc, without looking?

No one knows why this particular accident happened, and yes, again, it is SO tragic. But we can't design everything so that no one will ever get hurt. THAT kind of thing hurts ALL of us in the long run, as we become even more like sheeple than we already are...not able to think for ourselves...common sense going out the window, etc.

"...who crosses a street, train track, etc, without looking? "

Twice in the previous two weeks leaving work in Los Alamos, I had to evade blatant red light runners. In one case, I saw the guy looking down at something inside his car. In the other case, the guy was looking straight ahead, but obviously not paying attention. What gives?

As a motorcyclist and bicyclist, I assume, usually correctly, that the only way to avoid personal tragedy is to take on 100% of the responsibility for my safety and the safety of those in my vehicle. One cannot count on the guy searching for his dropped CD or assume a traffic light will keep you alive. That's just the way it is.

People need to take PERSONAL safety more seriously. Period. You can do so much to make bike paths safe, but my fear is when we tell people they are on a "safe facility", they stop ACTING safely.

Should the map show the road is St. Francis, not Cerrillos?

Thanks for the catch, we're working to get the error corrected.

Although the cyclist would be screened from the tracks until clearing the Zia Station buildings, one should be slowing and checking for train traffic before encroaching on the crossing. Stop, Look, and Listen. My hunch is this is a case of inattention.

Those who have never been inattentive can cast the first stone. Most of us survive our inattention moments with a "whew....". Once in a while, inattention happens at a critical moment and we are left picking up the pieces. Lesson learned for all of us, regardless of how we get around.

I remain a critic of the NMDOT's policy of providing least common denominator treatment to bicyclists and pedestrians. It may or may not be "standard treatment" to omit gates or warning lights at a busy trail crossing but it would not be a bad idea to do so on such a busy, cluttered, urban intersection where cyclists are arriving at right angles to the warning lights and screened by buildings. The new NACTO urban bike guide often has higher standards than NMDOT uses.

This incident focuses attention on both the individual's and the government's need to do better. Cyclists need to ride safely, and the State needs to do better than offer lame excuses on its often lousy treatment of cyclists and pedestrians.

She had to have seen the train even with headphones on. Was she a diabetic or did she have any other medical issues?

condolences to friends and family.

Even the most avid bike rider needs to pay attention - and it is obvious she was not, it is hard to miss a train when you are out in the open. I feel sorry for the conductor who must be traumatized along with the witnesses because of her inattention. I feel sorry for her friends who will miss her.

This is sad and unfortunate. A basic of any "crossing" anywhere is to look both ways. I am surprised we do not see more accidents with bicycles since I rarely see one stop at a stop sign or even a red light. For those few (a very small minority) who do I thank you for following the rules of the road.

Very puzzling how she (northbound) and the train (southbound) were heading right at each other, and she somehow didn't see it or the crossing gate lights or hear all the clanging noise and train horn?

What the article does not point out is that there are no barrier arms or warning lights on the Santa Fe bicycle rail trail itself. The bike/footpath runs parallel to St. Francis, and the warning lights would be at right angles to a northbound cyclist.

That was a different person, hit by the train near Belen.

Oh my Lord, you're right. Thanks Steve.