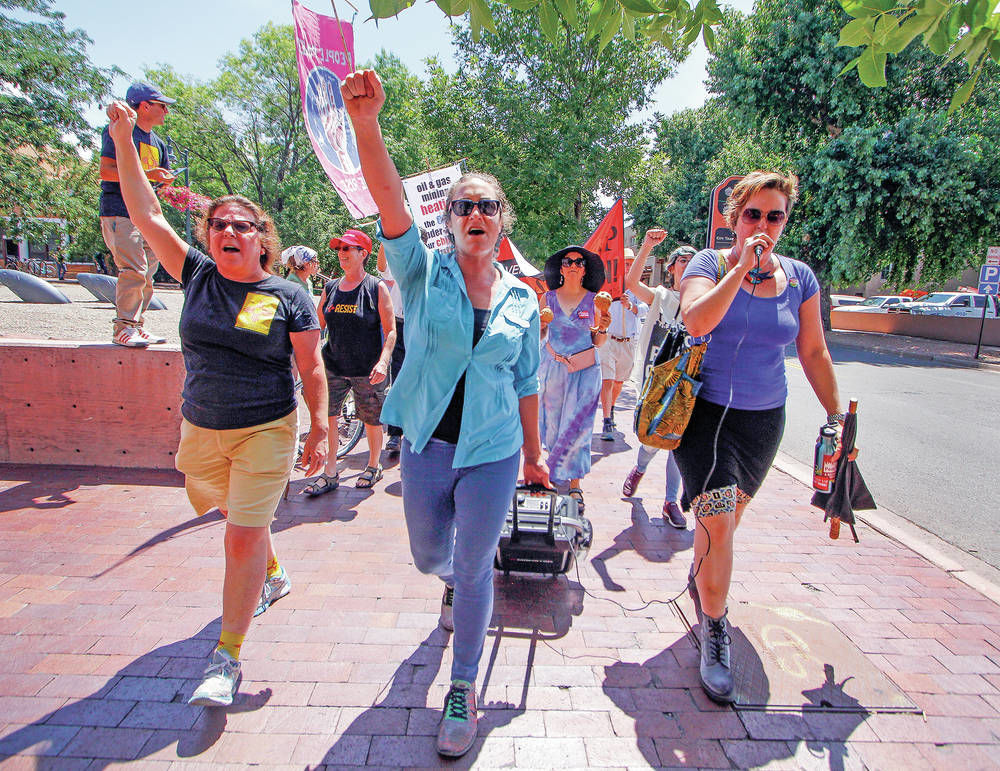 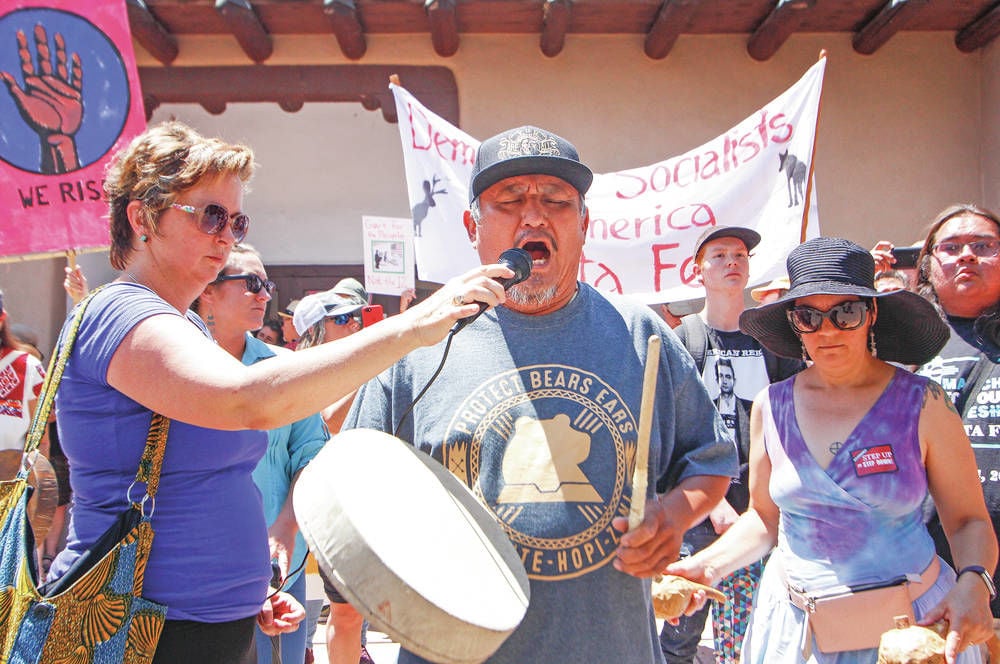 Bryan Harvey, a drummer with the Indian Horse Singers, prepares to strike his drum while singing at Friday’s protest outside the Santa Fe Community Convention Center. Gabriela Campos/The New Mexican 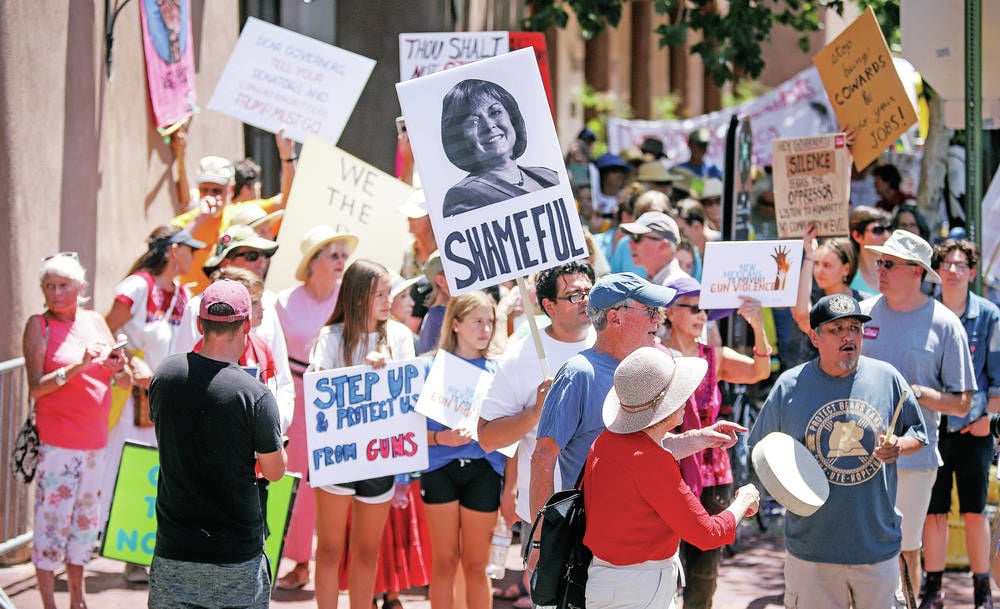 Groups of protesters from various organizations join together in front of the Santa Fe Community Convention Center on Friday, the second day of the National Governors Association’s summer conference. Gabriela Campos/The New Mexican

Bryan Harvey, a drummer with the Indian Horse Singers, prepares to strike his drum while singing at Friday’s protest outside the Santa Fe Community Convention Center. Gabriela Campos/The New Mexican

Groups of protesters from various organizations join together in front of the Santa Fe Community Convention Center on Friday, the second day of the National Governors Association’s summer conference. Gabriela Campos/The New Mexican

Jim Cook couldn’t fit everything he wanted to say on a poster board, so he rigged up a flag instead.

On his pole, he placed a red banner with a yellow symbol of a sickle and hammer, and a small star: the flag of the Soviet Union. Below that, he hung a much smaller version of the U.S. flag, upside down.

It was a bold political statement: “We’re in distress,” Cook said.

“Notice the relative sizes of the two,” he said, referring to the flags. “I think Putin is about 100 times smarter than Trump.”

The Albuquerque retiree paraded his creation in front of the Roundhouse on Friday morning. He was one of a few hundred demonstrators demanding action from governors gathered in Santa Fe for the National Governors Association’s 2018 summer conference.

The Step Up or Step Down rally — which included a march to the Santa Fe Community Convention Center, the main venue for the conference — was attended by members of more than 30 New Mexico organizations and had just as many messages for state leaders. Protesters held signs decrying President Donald Trump. One called New Mexico Gov. Susana Martinez “shameful.” Others advocated for the reunification of immigrant children separated from their families at the border. Some called for more green energy policies and affordable health care.

Cook was there in support of a number of causes — and to say his piece about his distaste for the Republican administrations of both New Mexico and the U.S.

“I’m 64, and in my life this country’s never been in worse shape, as far as I’m concerned,” he said. “[America] hasn’t become great again. It’s become worse than I’ve ever seen it.”

Despite the large number of progressive organizations involved in Friday’s protest, the long and varied list of concerns and the high-profile audience — some of the demonstrators said they heard rumors that Vice President Mike Pence was in town and that Trump himself would show up hours later — it was far smaller and tamer than other recent demonstrations in Santa Fe. Some rallies this year have drawn thousands of people, leading to downtown road closures as marchers filled the streets to speak out against lax gun laws or protest immigration policies.

On Friday, the crowd of protesters walked along sidewalks from the state Capitol to the convention center, staying out of roadways and obeying crosswalk rules, traffic lights and the commands of police officers on motorcycles.

No one was arrested or cited for any violations, state police said.

The rally had a slow start.

At 10 a.m., its scheduled start time, about 50 people were gathered at the Capitol.

Over the next two hours, the group slowly grew to at least a few hundred.

Jeff Haas, a Santa Fe civil rights lawyer and activist and a lead organizer of the demonstration, wasn’t disappointed.

“I’m really pleased,” Haas said as the crowd marched toward the convention center. “There’s a lot of noise, a lot of energy.”

The gathering began with an hour of short speeches at the Roundhouse from about a dozen people, each making a pitch for more public education funding or an end to uranium mining or better access to reproductive health care for women.

Some of the loudest cheers of the day came for a woman speaking on behalf of Somos Un Pueblo Unido, a Santa Fe-based immigrants rights organization.

Until recently, she told the crowd, Santa Fe was a pleasant place for immigrants to call home. But since the start of the Trump administration, she said, federal Immigration and Customs Enforcement agents have cracked down in the city, conducting workplace audits in search of unauthorized immigrants, sometimes following workers home to make an arrest.

She demanded the state government stop cooperating with ICE.

“No nos vamos a quedar callados,” the woman told the crowd: “We are not going to remain silent.”

As the crowd began marching downtown and singing, accompanied by drummers from the Albuquerque-based Indian Horse Singers, it often circled back to a common refrain: “Hey, governors, stand up,” the marchers chanted. “Stand up or stand down.”

After slowly meandering around the Plaza a few times, the group descended on Marcy Street in front of the convention center, where the songs and chants continued for about an hour.

The crowd started to peter out just after noon.

Pence was nowhere in sight (he was expected to travel to Macon, Ga., to attend a governor’s race rally there Saturday), and the only convention attendees filtering in and out of the building, occasionally listening to the demonstrators’ concerns or snapping a photo, were the governors’ well-dressed staffers.

As the protesters began dispersing, rally organizers huddled. Rebecca Sobel of WildEarth Guardians then announced to the remaining group she’d just received word that Trump was on his way to Santa Fe.

Anyone who wanted to continue the protest later in the day, for the president’s ears, was encouraged to show up Friday evening at the Eldorado Hotel, where Sobel learned from a source that he had booked a room.

And Trump never arrived. He reportedly spent the evening at a golf course in New Jersey.

Correction: An earlier version of this story incorrectly stated that no demonstrators gathered at the Eldorado Hotel on Friday evening.