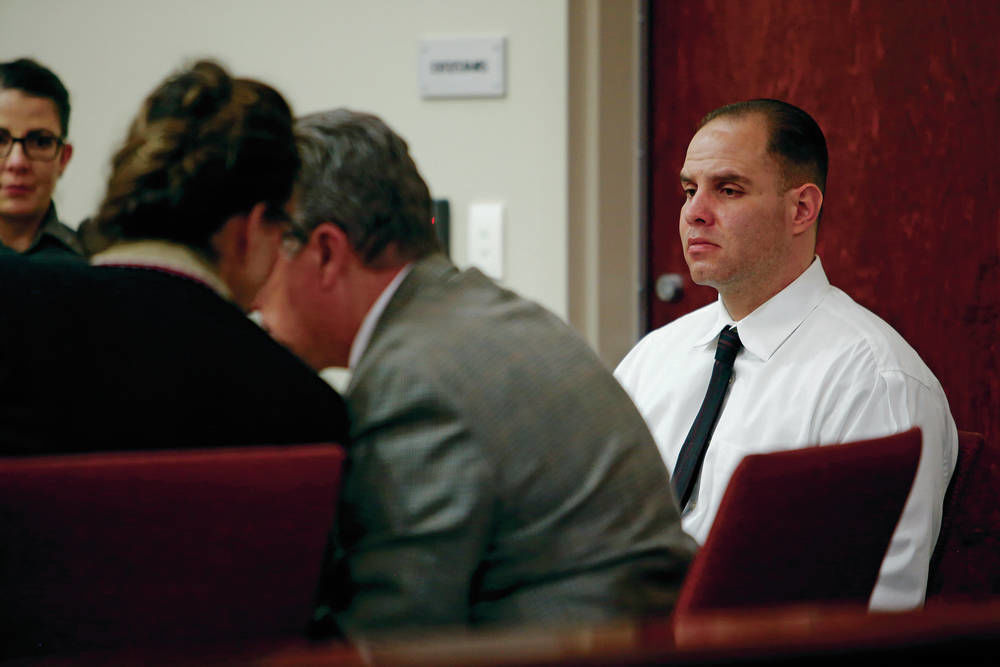 Christopher Owens sits in District Court on Wednesday during his retrial in the 2017 shooting death of Timothy Baca. Owens is accused of killing Baca after a night of partying. Luis Sánchez Saturno/The New Mexican 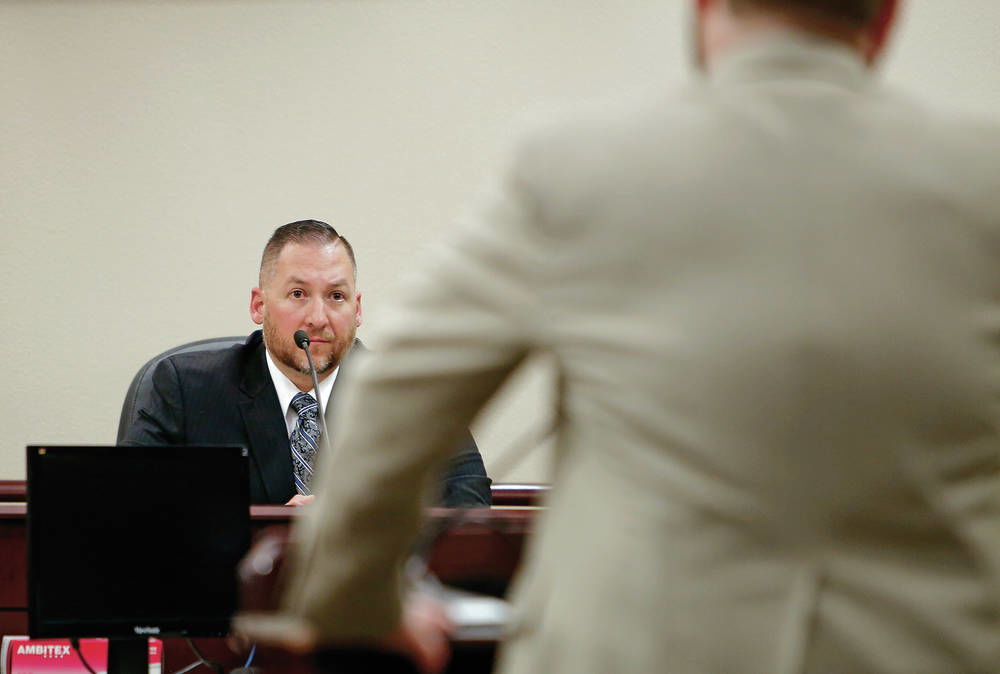 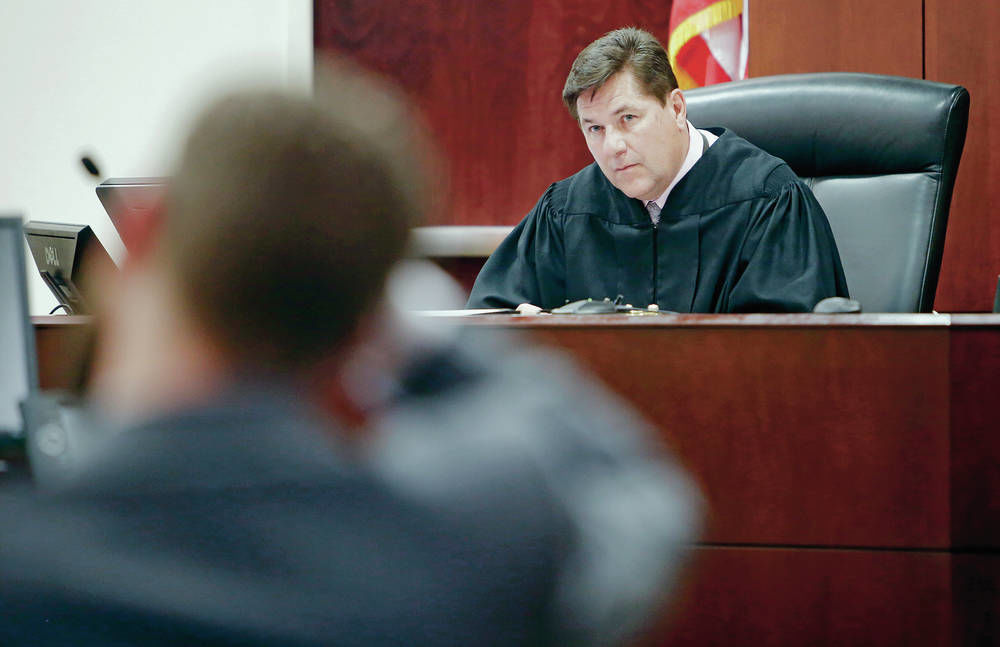 Christopher Owens sits in District Court on Wednesday during his retrial in the 2017 shooting death of Timothy Baca. Owens is accused of killing Baca after a night of partying. Luis Sánchez Saturno/The New Mexican

The dashboard camera clicked on, capturing grainy footage and the sounds of the siren on Santa Fe police Sgt. Brian Rodriguez’s cruiser as it barrelled through dark, empty streets.

Roughly a dozen people had called 911 just past 3:40 a.m. June 17, 2017, reporting gunshots and screaming in a northwest-side neighborhood, according to prosecutors and police.

Videos from Rodriguez’s dashboard and lapel cameras were the first pieces of evidence admitted into the murder trial of Christopher Owens, 32, who is accused of fatally shooting 30-year-old Timothy Baca on Viento Segundo Drive after a night of partying nearly two years ago.

Rodriguez breathed heavily as he approached Baca’s body, one of the videos showed. Blood stained the man’s shirt above his chest and splattered his neck. A woman frantically pumped Baca’s chest as his wife, LaPearl Baca, lay down beside him, calling his name.

The state District Court trial, which began Wednesday, is the second in the case in which Owens is charged with murder, tampering with evidence and trafficking of a controlled substance. Prosecutors say a magazine pouch, seven baggies of crack cocaine and a scale marked with Owens’ fingerprints were found discarded near the crime scene. But investigators never recovered a murder weapon.

Owens’ first trial, in January, ended in a mistrial shortly after it began because Baca’s stepfather had told the court he thought he was in possession of the .38-caliber handgun used to kill Timothy Baca. But ballistics experts later determined the gun had nothing to do with the crime.

During opening statements Wednesday, Assistant District Attorney Blake Nichols told the jury that Baca, a father of four young children, was shot directly in the chest with a single round, pierced by a .38-caliber bullet from Owens’ gun, “over a stupid joke.”

“Tim is dead because the defendant’s ego couldn’t take that joke,” Nichols said.

Nichols told the jury that over the coming hours and days, they would be exposed to graphic images and testimony. “I don’t expect any of you will enjoy this,” he said, “but we have to do this to seek justice for Tim.”

Owens attorney, Kelly Golightly, aimed to cast doubt on the state’s evidence against her client and portrayed him as a stranger among a group of revelers — an easy scapegoat. Owens had been calm and sober before the shooting, she said, “just having a nice night.”

“There are so many different versions of what they said, what their story is,” Golightly told jurors. “… The holes in the story never get closed.”

She suggested LaPearl Baca and her family might have implicated Owens to protect the memory of her husband as a “good man.”

Owens watched the testimony in a white shirt and dark tie. His mother and brother sat on a bench behind him.

Roughly a dozen of Timothy Baca’s friends and family members sat on the other side of the courtroom, passing tissue boxes and wiping away tears. Baca’s mother, Sylvia Garcia, shook silently as attorneys played police video showing her deceased son over and over again.

Nichols, in his opening statements, said the incident began the evening of June 16, when Baca left his job at the Pojoaque Pueblo Public Works Department and drove to meet his wife and in-laws for an early dinner at the Applebee’s restaurant on Santa Fe’s south side. It was LaPearl Baca’s birthday. After dinner, Nichols said, the couple went to a family barbecue, then on to a cousin’s house for drinks. They left their children with a grandmother.

At the now-defunct Skylight Lounge downtown, Nichols said, the couple met up with the Bacas, along with an underage cousin and her friend, a man named Juan Elias Torres and his friend — Owens.

The group drove to Buffalo Thunder Resort & Casino north of Santa Fe to dance and gamble, and returned to the city around 3 a.m., the prosecutor said; they stopped at McDonald’s to get sodas to chase down a bottle of Crown Royal whiskey.

The prosecution and defense disagree on what happened next.

Nichols told jurors that a fight began in the car as the group approached Santa Fe. A song — no one can remember which one — was playing on the stereo, he said, and as Torres and Owens sung along, Baca made a joke about whether the men “practice that together at night.”

The joke enraged Owens, Nichols said, adding that Owens asked if Baca was a “tough guy” and then told Torres, who was driving, to hand him a gun in the glove compartment. Instead, Torres leaned across the passenger seat and locked the glove box.

LaPearl told the men to stop fighting, Nichols said, but instead, “the defendant kicks her seat and tells her she is a fat bitch.”

LaPearl told Torres to pull over, the prosecutor said.

It is unclear how quickly the group got out of the car on a street near the Lodge at Santa Fe, or whether the altercation between Baca and Owens became physical outside the car. But, Nichols said, the men agreed to drop the argument.

“Everybody remembers this the same: The fight is over … at least for Tim, it was,” Nichols told the jury. He said Owens then walked around the car, the keys in his hand, and unlocked the glove compartment. Owens returned to face Baca, and when the man extended his arm to shake Owen’s hand, Nichols said, “The defendant raises his hand, not to shake Tim’s hand, but raises his hand with a gun.”

Photos showed a bottle of alcohol, a white card from Buffalo Thunder and a black magazine pouch discarded among the dirt and chamisa.

The defense attorneys, in their opening statements, focused on the witnesses and their credibility. Why, the attorneys asked, did the screaming women at the crime scene not answer Rodriquez when he asked six times: “Who did this?”

Two of the women were on the phone when police arrived, defense attorneys said, raising questions about who they were speaking to and whether the people at the scene had time to corroborate a version of events.

Rodriguez, the first witness to take the stand for the state, described the scene as chaos and hysteria.

Video from the officer’s lapel camera showed LaPearl Baca clutching her husband’s head in her hands.

“Please come back to me,” she said to him, as Rodriguez administered CPR.

The trial will continue Thursday and into next week in District Judge T. Glenn Ellington’s courtroom. It is expect to last at least a week.