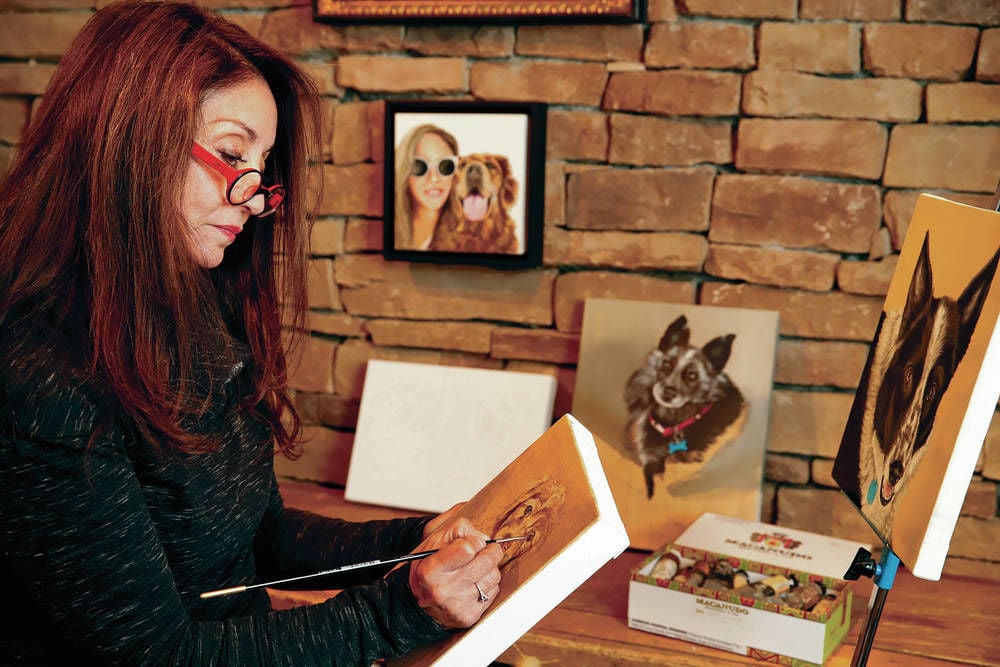 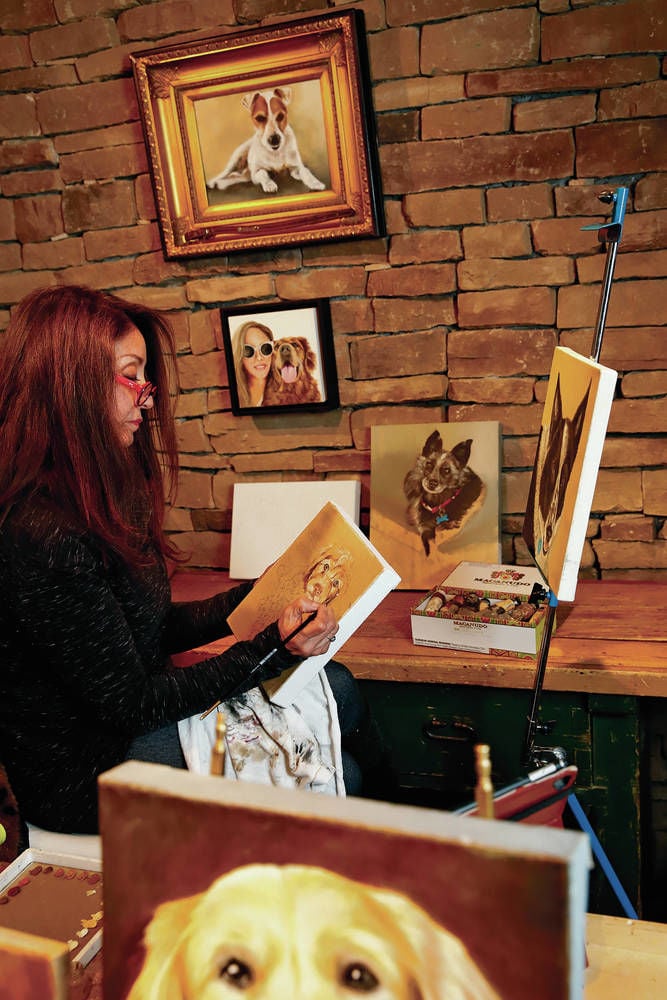 Lori Snable used to be uncomfortable painting in front of people. But the longtime artist in residence at the Inn and Spa at Loretto now paints her signature pet portraits out in the open, happy to talk with people about her process and, often, their pets.

“I was never one of those people who painted in public,” Snable said. “I always just painted inside a studio.”

After eight years of painting at Loretto through an Artists in Residence program, she can’t imagine doing her work any other way.

Snable is one of 12 artists who have been giving live demonstrations of their artwork on Fridays and Saturdays in galleries and hotels throughout Santa Fe. The program, which began in November and lasts through February, started in 2011 at the Inn and Spa at Loretto and expanded under Tourism Santa Fe, the city’s convention and visitors bureau.

In its third year under city sponsorship, the program includes three galleries and four hotels. Along with the Inn and Spa at Loretto, participants include the Inn on the Alameda, La Fonda on the Plaza, Buffalo Thunder Resort & Casino, 7Arts Gallery, Thomas-Carole Bowker Fine Art Studio and Barbara Meikle Fine Art.

Artists work on-site from 4 to 7 p.m. every Friday and Saturday, with some locations also hosting artists on Thursdays and Sundays. As visitors watch an artwork unfold, they are invited to talk with the artist about their methods and inspiration, and maybe purchase a conversation piece of their own.

Snable, 67, was one of the first artists in the program. At one point, she said, 18 artists were cycling through Loretto’s lobby to show off their products and their processes.

Diane Horton, the regional concierge for the hotel, said it partnered with the city a few years ago. The program was popular, she added, but getting too big for the hotel to manage on its own.

Randy Randall, the city tourism director, said in a news release the Artists in Residence is elevating the art experience for visitors.

“We love when visitors tour our museums and shop in the galleries, but this opportunity allows for the experience to go beyond that and for the visitor to make connections with some of Santa Fe’s top art talent,” Randall said.

Snable, an accomplished pastel artist, has spent the past dozen years focusing on oil portraits of furry friends and the occasional person. On a recent day at Loretto, she was surrounded by her creations: a jowly bulldog, a wiry terrier and a smiling golden retriever.

People often stop by while she’s working on a painting to tell her about their departed or current pets.

Snable doesn’t mind; she says it’s all about the connections.

“It’s something I really enjoy doing, talking with everyone, especially the children,” she said, adding she often invites kids to use her pastels.

Tom McGee and Dayna Fisk-Williams are two of the four artists in residence throughout the season at 7Arts Gallery.

On its website, the gallery describes itself as the “farm-to-table” experience — but with art. Tucked behind plinths displaying paintings is a scratched and paint-covered worktable, smelling of beeswax and oils and projects in progress.

Fisk-Williams, 62, weaves Rio Grande-style rugs and clothes inspired by origami principles. She started eight years ago, after retiring from teaching overseas. Since she began living in Santa Fe, she’s offered a new way for people to experience her artwork: through Airbnb. People can sign up on the site for a three-hour session with her for $175.

Two years ago, she had just a handful of students.

“This year, I’ve had 50 people sign up,” she said. “The general trend is to experience the art as well as buy it.”

Lobby of the Inn and Spa at Loretto: Lori Snable, pet portraits in oils on canvas; every Monday and Saturday through February.

La Fonda on the Plaza: Estella Loretto and Glenda Loretto, sisters who work with jewelry (Dec. 27, 28 and 29).