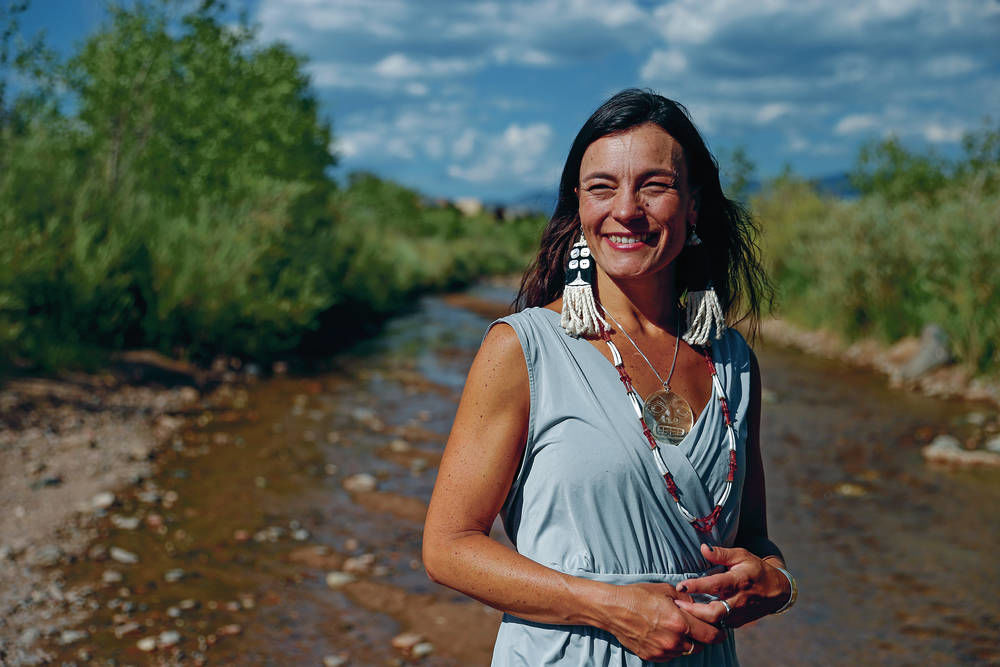 Molly of Denali follows a young Alaska Native girl in her adventures through the fictional village of Qyah, Alaska. Courtesy PBS

Molly of Denali follows a young Alaska Native girl in her adventures through the fictional village of Qyah, Alaska. Courtesy PBS

Media representation of a racial or ethnic group can have a lifelong effect on a child’s self-worth, a TV producer from Santa Fe says.

That’s why the premiere of Public Broadcasting Service new animated television show for kids, Molly of Denali — the first nationally distributed animated series to feature a Native American in the lead role — is such a big deal, said Santa Fe native Maya Salganek, a producer with the show.

The action-comedy, which debuts Monday, follows a young Gwich’in/Koyukon/Dena’ina Athabascan girl in her adventures through the fictional village of Qyah, Alaska, often with her two best friends and her dog, Suki.

Although the show aims to empower and educate all youth, Salganek said, it’s a reminder to minorities, specifically Native Americans, that they are worthy and visible.

“In the media, if you don’t see yourself represented, then children think they are not as valuable,” Salganek said.

Molly of Denali gives Native kids a reference point, she said: “Having a positive role model like Molly can give us an aspiration of what we all can be.”

Although Salganek, whose role as interstitial producer was to create a handful of brief, live-action videos that will appear in the middle of an episode, is not Native American, she said being raised in Santa Fe taught her to embrace diversity from a young age. Since she moved to Alaska in 2000, just a couple of years after graduating from the University of New Mexico, indigenous inclusion has played an even bigger role in her life.

She married an Alaska Native, Da-Ka-Xeen Mehner of the Tlingit Nation, who she met in college and whose family informally adopted her into the tribe in 2010.

Being part of the community, she said, opened her eyes to misconceptions of Alaska Natives and influenced her to pursue a master’s degree in visual anthropology.

In 2011, Salganek — a 1993 graduate of Santa Fe Preparatory School — founded a film program at the University of Alaska Fairbanks, where she continues to serve as a professor and create independent films that focus on telling stories of northern Native people. Among her biggest accomplishments, she said, was working with Natives to create We Breathe Again, a documentary that features four Alaska Natives attempting to free themselves from the effects of trauma and a suicide epidemic that plagued their community.

These experiences, Salganek said, have taught her the importance of representing Native people not only on the screen, but also behind the scenes.

“It’s a long-standing issue that Native stories are being told by non-Native people,” she said, emphasizing that every aspect of the Molly of Denali — from the linguistics and art, to the history and dialogue — include Native producers, writers, actors, filmmakers and advisers. Even the theme song was created by Native musicians.

A number of those involved in the show have ties to New Mexico: Production assistant Sydney Isaacs and Alaska Native Working Group adviser Rochelle Adams are graduates of the Institute of American Indian Arts, and Princess Daazhraii Johnson, the creative producer, serves on the IAIA board of trustees.

While each 25-minute episode features bits of well-known Native Alaskan culture, from dog sledding to salmon fishing, Salganek said it avoids stereotypes and tells stories that are relevant and relatable to children everywhere.

Salganek’s handful of two-minute, live-action snippets run as a sort of intermission between each episode’s two 11-minute animated features.

Although the clips are brief, Salganek said, “they’re soul-filled.”

In the first episode, between animated shorts titled “Grandpa’s Drum” and “Have Canoe, Will Paddle,” Salganek’s work shows kids at the the Tenana River in Fairbanks, where they learn about the history of canoeing along the waterway from Native elders.

Having these real-life videos run in tandem with animation, some of which feature her 10-year-old son, Keet Mehner, reminds youth that the stories presented in the show are about present-day northern Native life — “not just as an animated character, but as a real person,” Salganek said.

In the first episode, as Molly embarks on a journey to find a Native drum that once belonged to her grandfather, she learns about the traumas of colonization and the empowerment that comes from performing traditional songs and speaking one’s native tongue.

In another episode, Molly must confront the societal definition of beauty, when her look-alike doll is swapped for a white-skinned, blue-eyed replacement.

And in several scenes throughout the series, the issue of climate change is addressed. Though some of these lessons may seem heavy for the show’s intended 4- to 8-year-old audience, Salganek said, it’s vital for children’s TV shows to tap into this authentic type of education.

“Otherwise, kids are only learning half-truths,” she said. “And that’s not education.”

The premiere of PBS’ new Molly of Denali animated TV series for children is at 9:30 a.m. Monday and will air again at 2 p.m.

The show will air at the following times: