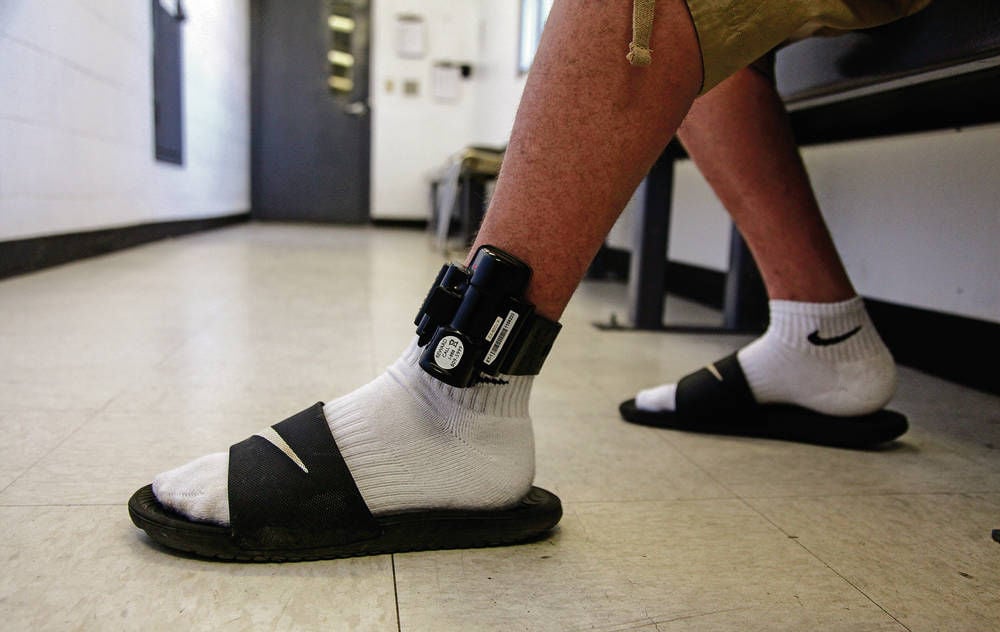 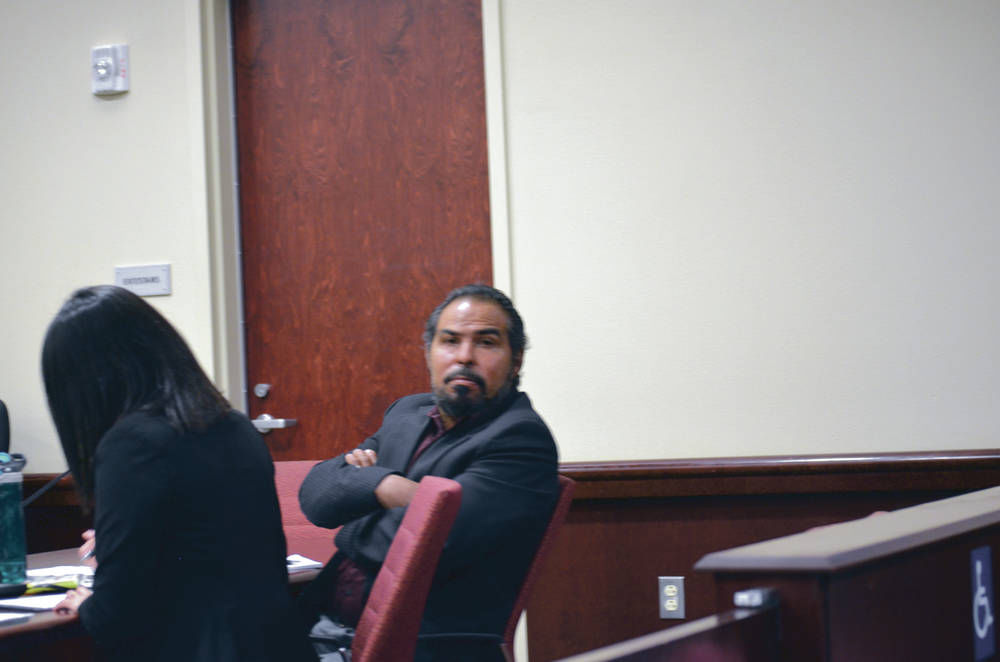 James Coriz and his attorney, public defender Kristen Dickey, sit in court Sept. 26 during his trial. Coriz, who had been accused of threatening or intimidating a witness, was exonerated — after he had paid more than $1,000 to Santa Fe County for being on an ankle monitor while awaiting trial and spent 21 days in jail because program officials said he’d violated the electronic monitoring agreement. Phaedra Haywood/The New Mexican 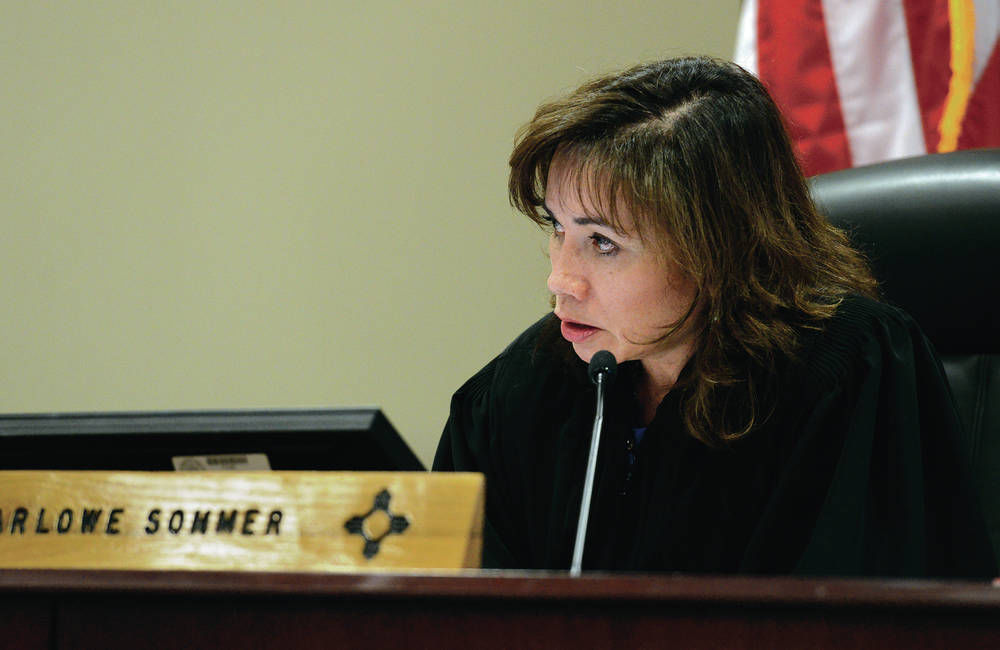 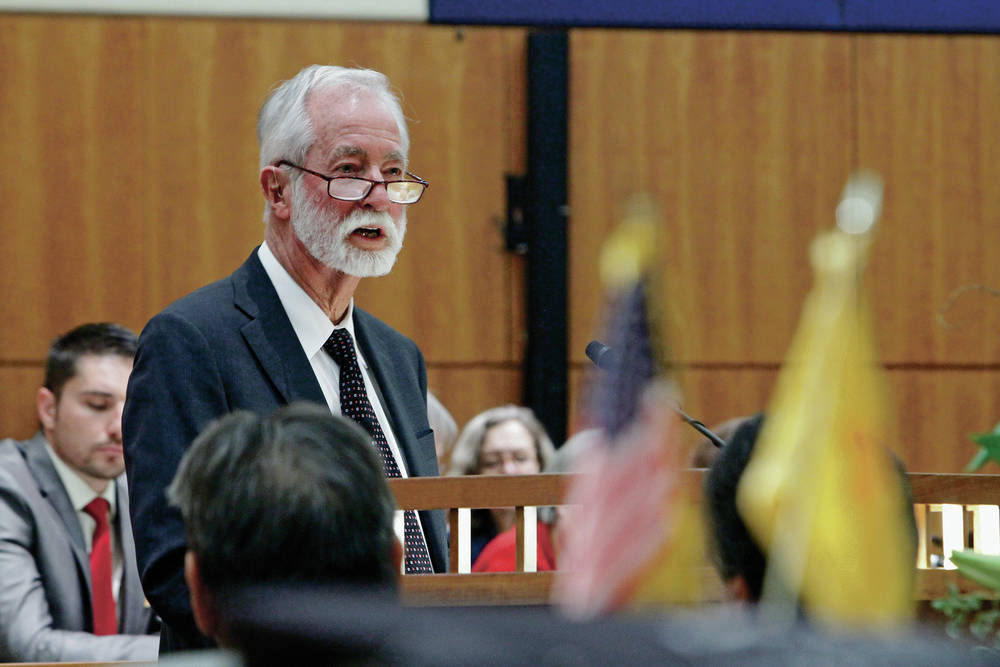 James Coriz and his attorney, public defender Kristen Dickey, sit in court Sept. 26 during his trial. Coriz, who had been accused of threatening or intimidating a witness, was exonerated — after he had paid more than $1,000 to Santa Fe County for being on an ankle monitor while awaiting trial and spent 21 days in jail because program officials said he’d violated the electronic monitoring agreement. Phaedra Haywood/The New Mexican

James Coriz was charged with intimidating a witness during a trial in the First Judicial District in April.

Coriz, 57, said he hadn’t threatened anyone and refused to take a plea deal. About five months later, a jury found him not guilty.

But by then, Coriz says, he had paid more than $1,000 to Santa Fe County for being on an ankle monitor while awaiting his trial and had spent 21 days in jail after program officials said he’d violated the electronic monitoring agreement that governed the conditions of his release.

Had he been found guilty and sentenced to time in jail, Coriz would have been given time-served credit for every day he spent on electronic monitoring, plus the 21 days he spent in jail. But after being exonerated, he got no consideration for the time and money he spent on the court-ordered ankle bracelet — not even an apology, never mind a refund.

“I think it’s terrible that they put people on ankle monitors before they are found guilty,” Coriz said in a recent interview. “They find you guilty before they find you innocent.”

For now, officials say they’re only looking at the implications of charging defendants for the costs of participation in the program.

The chief judge said she called the meeting to “understand the types of charges being required of participants in the Electronic Monitoring Program,” and to “make sure that no one has to stay in or gets brought back in because they can’t afford the fees.

“I brought Justice Daniels in because I wanted to know if any of this is prohibited under the concept that you can’t stay in jail simply because you can’t afford bail,” Marlowe Sommer said.

For now, Daniels said he’s taking a “methodical” approach and reviewing only the financial aspects of the program in light of the fact that federal law “really puts it in black and white … that you can’t put people in jail for not having money.”

Marlowe Sommer said she has asked Santa Fe County, which runs and funds the Electronic Monitoring Program, to provide the written policies that govern the program so she and Daniels can examine the rules before meeting again to see what, if any, changes needed to be made.

But until the judicial officials asked to see the policies, they might not have existed.

When public defender Jennifer Burrill subpoenaed “current polices and procedures” in May while defending a client who had spent 50 days in jail after being arrested on a warrant and electronic monitoring violation, Assistant County Attorney Cristella Valdezresponded: “Santa Fe County has no records responsive to your request.”

The New Mexican’s public records request in early August netted about a dozen pages of signatures for program participants in early August, but no policies.

It wasn’t until Sept. 28, after court officials had requested the policies, that the county emailed The New Mexican, saying additional responsive records had been “identified” and that a set would be provided to the newspaper. The documents, however, contained only blanks where officials’ signatures or dates of effectiveness should have been, leaving open the question of who approved them and when.

County spokeswoman Kristine Mihelcic attributed the earlier denials of the existence of the records to “a miscommunication” and said the county “is currently looking into why the policy was not signed and dated, but we understand it has been in use since approximately 2013.”

District Defender Morgan Wood, who oversees the Santa Fe County offices of the state Public Defender’s Office, says her staff has had “a lot of problems” with the Electronic Monitoring Program, adding that program Director Tino Avla has “been given a wide latitude to decide when someone has violated and when to take them into custody.

“There is such a lack of documentation, and there are no standards, and it doesn’t seem like there is any oversight,” Wood said. “It’s a little difficult when [electronic monitoring] isn’t held to standards.”

Alva said in a recent phone interview that the program does provide reports on the violations — but only to the court, not the public defenders.

But when public defenders are afforded the opportunity to see reports, Wood said, “the paperwork is wrong, there are typos, it’s very uninformative, [it’s] maybe a paragraph. It makes it difficult to defend [against]. You can explain to the judge, but you are the person charged with the crime, versus the person who has the contract to run [electronic monitoring]. So, who you gonna believe?”

A review of the policies in an interview with Alva and Santa Fe County Public Safety Director Pablo Sedillo confirmed many aspects of the program are left to the discretion of program staff and judges.

There appears to be no set criteria for determining who is eligible for the Electronic Monitoring Program. According to the policies the county provided, “approval or denial of admission to the program shall be established on a case-by-case basis.”

Because the eligibility criteria isn’t explicit, it’s unclear if the procedures were written with consideration of the different legal rights of pretrial detainees and those who have been convicted.

Justice Daniels said in a recent telephone interview that the policies he received appear to have been written to govern only the monitoring of post-conviction defendants.

“Apparently they don’t have written protocols for pretrial supervision,” he said. “It would be a good idea to have that. They haven’t been worked out.”

Mihelcic said the county has used the same polices for pretrial detainees and post-adjudicated inmates “for years, without judicial complaint.”

Complicating the issue is this: Within the tri-county First Judicial District, Santa Fe and Los Alamos counties operate their own electronic monitoring programs and use taxpayer money to subsidize them. Rio Arriba County does not.

That means Santa Fe and Los Alamos defendants can ask for fees to be waived or reduced based on financial hardship, while Rio Arriba County defendants must pay full fees to a private nonprofit that provides the service there.

Any waiver or reduction in electronic monitoring fees “is at the sole discretion of the County” according to the policies. Alva said there is no matrix detailing the income thresholds for eligibility or the process for appealing a denial. He added that senior case managers determine who qualifies “basically based on how many hours they [defendants] work.”

For example, someone who is employed 40 hours a week pays full price — a $25 setup fee, $25 for each drug test and $10 per day for the ankle bracelet. For a defendant who works 20 hours a week, the payment goes down by half, Alva said.

But the rules also specify that program participants must pay setup costs up front while waiver requests are pending.

What if they can’t afford the fee?

“Every situation is a case-by-case basis,” Alva said. “That’s how we look at it.”

Judge Marlowe Sommer said she hasn’t heard of anyone being kept in jail because they couldn’t afford the $25 setup fee, and Burrill said some defendants have been allowed to perform community service instead of paying fees.

According to numbers provided by Santa Fe County, the cost of running the program generally hovers around $1 million each year, and participant fees bring in only about 20 percent of that. The other 80 percent is funded by county taxpayers.

Santa Fe County pays about $400,000 a year to a private vendor, BI Inc, to rent the electronic monitoring equipment. The balance funds salaries for the program’s approximately five employees and its drug-testing services.

A question of effectiveness

Electronic monitoring has long been touted as a way to reduce incarceration costs while keeping those who are accused of crimes employed and out of jail while awaiting trial, as well as a way to ensure defendants show up for court dates.

But is it working?

Chief Judge Marlowe Sommer said it is working but couldn’t point to hard data. She said electronic monitoring and other forms of pretrial services — including drug testing and mental health referrals — allow the courts to take a more “hands-on” approach to helping defendants while also protecting the community.

For example, she said, drug testing — a mandatory element in the electronic monitoring system — can keep people accused of drug crimes from committing property crimes to support their habit while they are awaiting trial.

“It does the exact opposite,” he said, adding that in his experience, drug users are afraid to come to pretrial hearings for fear they’ll test positive and be arrested.

“If someone is a lifelong heroin addict, he’s not going to magically not be addicted to heroin because a judge said so,” Erickson said.

Perhaps the most important question facing criminal justice officials is whether putting pretrial defendants on electronic monitoring violates the rights of people who are considered innocent until proven guilty, regardless of who pays for the service.

Marlowe Sommer and others are quick to point out that defendants who are convicted after spending time on electronic monitoring are credited for time spent, just as if they had been in jail.

But no one The New Mexican interviewed had any answers when asked about how people who have been exonerated are credited for the money and time they spent adhering to program rules.

Asked whether that constitutes pretrial punishment, Justice Daniels said he couldn’t address the question head-on — in part because the state Supreme Court had not been formally asked to consider the issue.

Daniels said there is a “general principal of law” that “you can’t punish people before trial,” but he added that a mid-1980s U.S. Supreme Court decision found “pretrial conditions are not, per se, pretrial punishment.”

Paul Haidle, a criminal justice advocate for the American Civil Liberties Union of New Mexico, said the civil rights organization is concerned the costs associated with electronic monitoring and other pretrial services, including drug testing, could “encourage innocent people to plead guilty” — increasing incarceration rates in a state that already has one of the highest rates of pretrial detainees in the country.

Coriz, who walked free after a jury found him not guilty, is certain that he was punished nonetheless.

“I wish I could get my money back for the [electronic monitoring] and for all the lost time,” he said. “I don’t think it’s fair. I think we are still in America, aren’t we?”