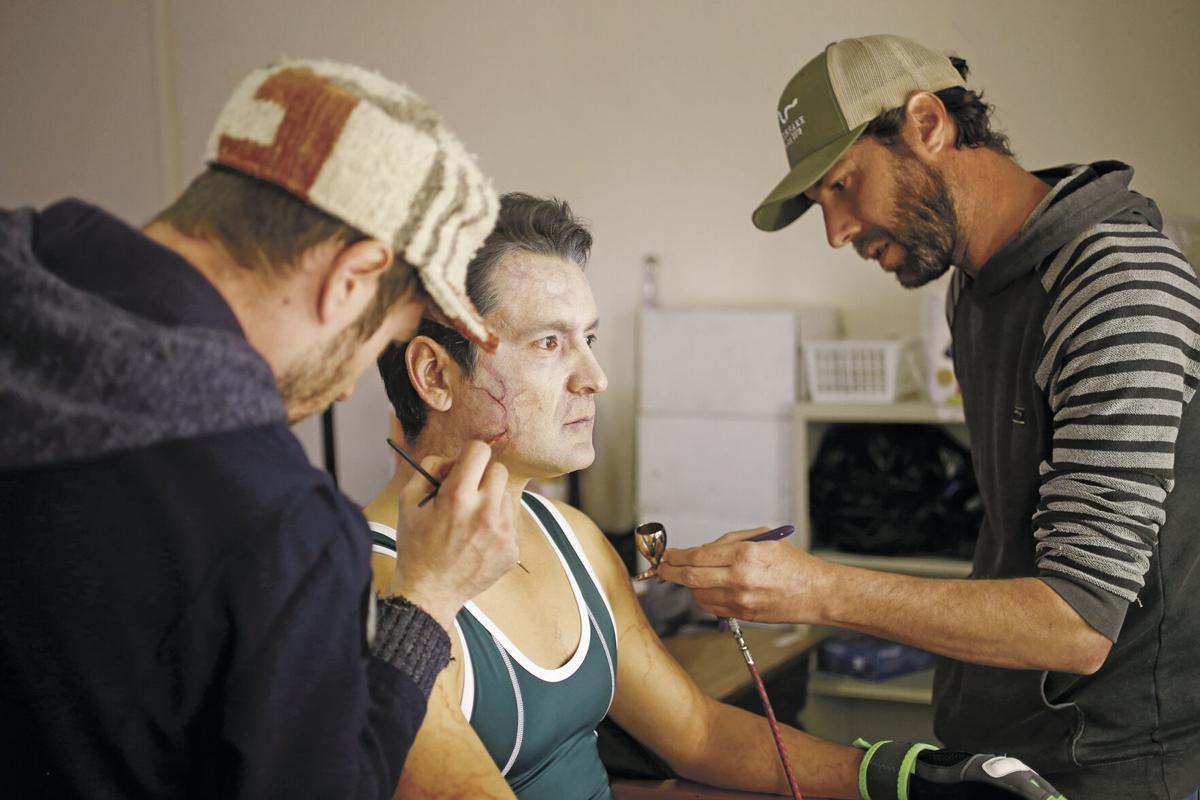 Bryan Perkal, left, and Jerrad Gray of Albuquerque, with SPFX MU, apply zombie makeup to actor Luis Bordnado in April 2019 during the filming of the Manson Brothers Midnight Zombie Massacre in Española. The International Alliance of Theatrical Stage Employees, which represents 60,000 behind-the-scenes entertainment industry workers, is seeking a vote to authorize the union to call for a strike. 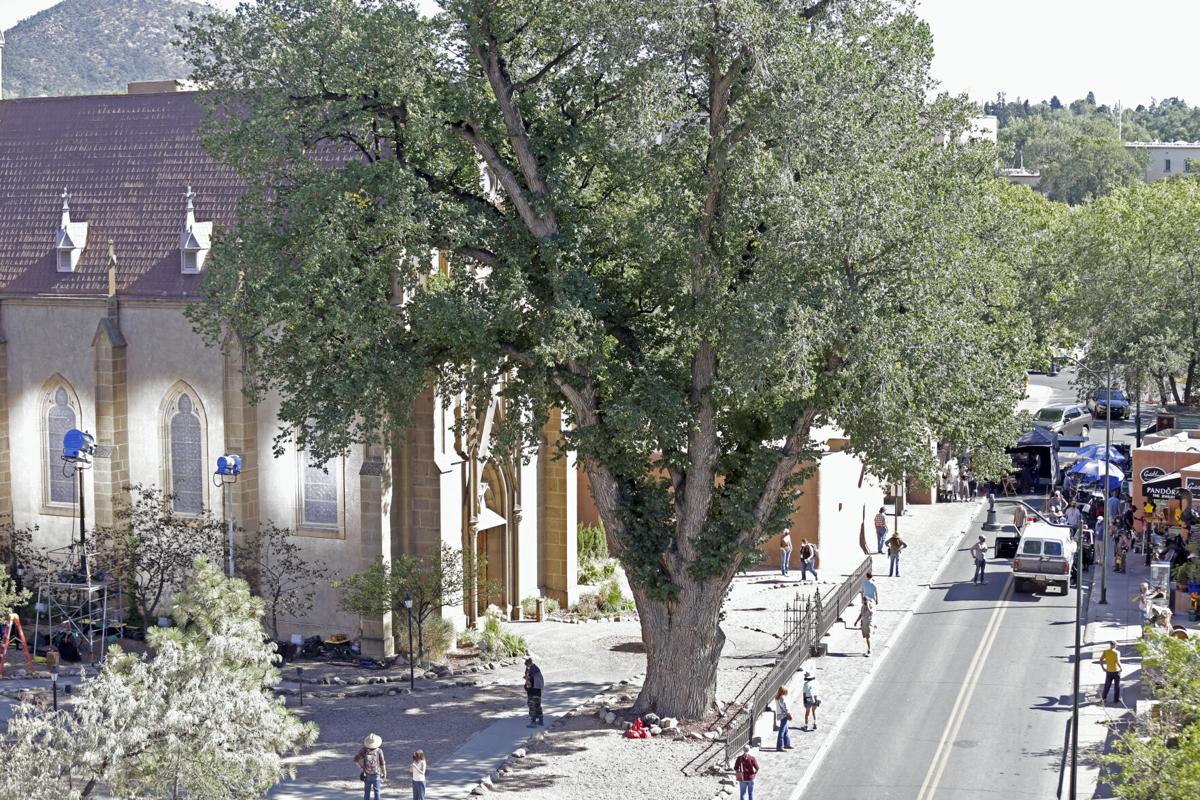 Filming for an unknown production takes place Wednesday at the Loretto Chapel downtown. 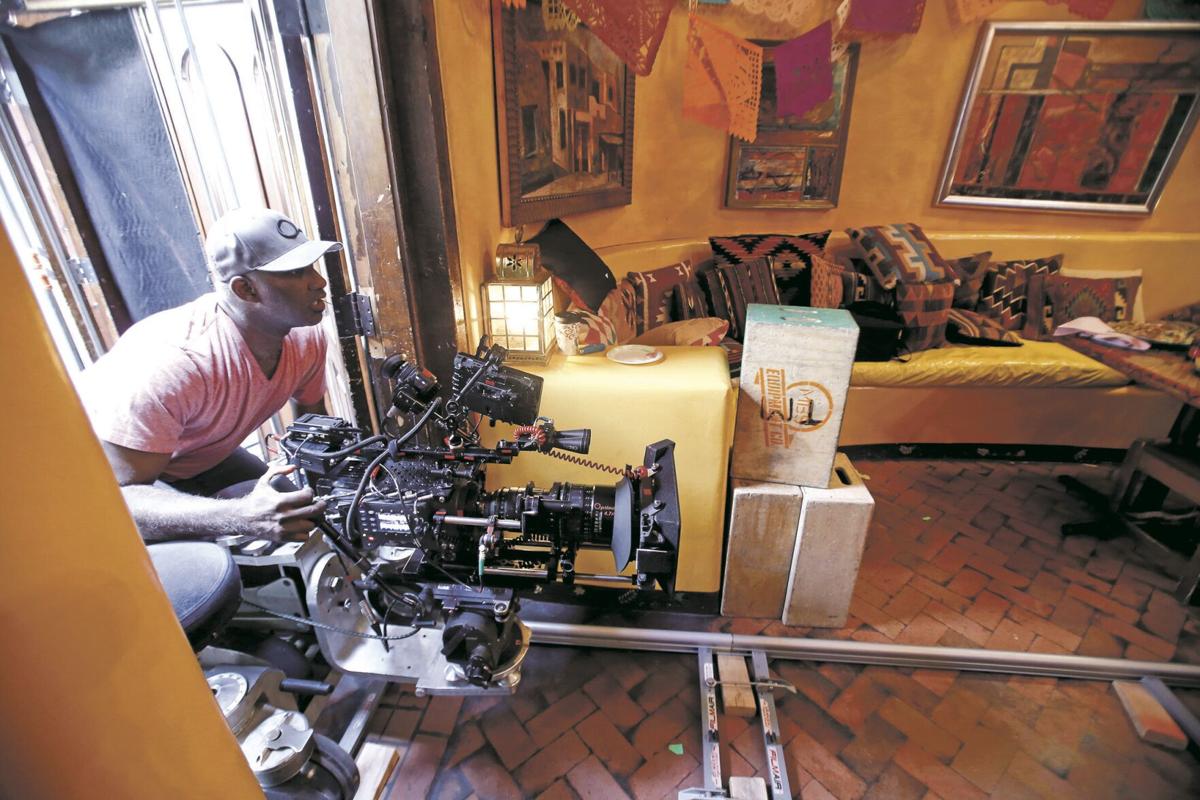 Camera operator Kirk Gardner works on the set of Ideal Home while filming in Santa Fe in 2016.

Bryan Perkal, left, and Jerrad Gray of Albuquerque, with SPFX MU, apply zombie makeup to actor Luis Bordnado in April 2019 during the filming of the Manson Brothers Midnight Zombie Massacre in Española. The International Alliance of Theatrical Stage Employees, which represents 60,000 behind-the-scenes entertainment industry workers, is seeking a vote to authorize the union to call for a strike.

Filming for an unknown production takes place Wednesday at the Loretto Chapel downtown.

Camera operator Kirk Gardner works on the set of Ideal Home while filming in Santa Fe in 2016.

The film and television industry in New Mexico and across the country could grind to a halt in coming weeks as the national union representing more than 90 trades seeks authorization to call for a strike against motion picture and television producers.

The International Alliance of Theatrical Stage Employees, or IATSE, on Tuesday announced it would seek a vote to authorize the union to call for a strike among its 60,000 members.

The Los Angeles Times reported the authorization vote could come as soon as Oct. 1. IATSE did not announce a vote date.

These include the TV show Roswell, New Mexico, which started filming its fourth season in July at Santa Fe Studios, and the feature film Trail Blazers set to start shooting soon at Mariposa King Studios near Chama.

“Trail Blazers is ready to shoot in October, but a strike is starting to loom,” Mariposa Chief Operating Officer Tomas Sanchez said. “I definitely think they are going to strike. I think it’s a bad time, but I also understand if you don’t stand for something, you will fall for anything.”

Trail Blazers would have 150 people at Mariposa, which has backlots and green-screen facilities, and five employees, said Sanchez, a Screen Actors Guild member.

Santa Fe Studios, located off N.M. 14 just south of Interstate 25, has about 100 people on board for Roswell, New Mexico and about 10 studio employees, said Octavio Marin, the studio’s vice president of production and operations.

“We believe this will work out for the better,” Marin said. “We strongly believe it will work out. The industry is as strong as ever. It is always in the best interest to keep working.”

New Mexico had 72 film and television productions in the 2021 fiscal year that ended in June, with $624 million in direct spending and employing an estimated 9,000 New Mexicans, the state Film Office reported.

New Mexico has six studios with 23 soundstages and numerous other smaller production companies and studios without soundstages. MovieMaker magazine ranks Albuquerque as the No. 1 big city for filmmakers to live in (not counting New York and Los Angeles), and Santa Fe is the No. 2 small city. Businessfacilities.com ranks New Mexico at No. 2 behind Georgia as “film production leaders.”

The national IATSE in its Tuesday announcement cited “excessively unsafe and harmful working hours” in addition to concerns about wages for the lowest-paid crafts. Other items mentioned included pay for workers on certain “new media” projects.

“It is incomprehensible that the Alliance of Motion Picture and Television Producers … claims it cannot provide behind-the-scenes crews with basic human necessities like adequate sleep, meal breaks, and living wages,” the IATSE statement reads. “Worse, management does not appear to even recognize our core issues as problems that exist in the first place.”

IATSE walked away from months of negotiations with the alliance after producers announced no counteroffer would be made to the union’s most recent proposal.

“When we began negotiations with the IATSE months ago, we discussed the economic realities and the challenges facing the entertainment industry as we work to recover from the economic fallout from the COVID-19 pandemic,” the producers group said in a statement. “In choosing to leave the bargaining table to seek a strike authorization vote, the IATSE leadership walked away from a generous comprehensive package.”

IATSE Local 480, based in Santa Fe, is “the crew members that are largely responsible for prep and the making of all motion picture, television and streaming content,” Pecos said.

“A strike authorization vote has been called for,” Pecos wrote in an email. “We are mobilizing members for a strike authorization vote. This is not a call for a strike. A strike would mean that all IATSE workers that work under the Area Standards Agreement and Hollywood Basic Agreement would stop work, leaving the vast majority of positions necessary to make a production vacant.”

is the Albuquerque page.

S.F. is between Pittsburgh (№ 3 “small city”) and New Orleans (№ 1 “small city”) — evidently their dubious methodology uses a city-proper population of ½-million as the threshold, which puts Albuquerque on the “big” side. All the cities of course have much larger metropolitan areas.

is the full report on state rankings.

CAN'T BELIEVE THERE IS NO MENTION OF "NO JAB, NO JOB" OR IS THAT INTENTIONAL. TIME TO STAND UP ON THIS COMPANEROS AND I WAS A UNION SHOP STEWART AT ONE TIME.

Thank goodness, Joseph Hempfling, you are not, no more.

Times have changed Mr. Hempfling. Today's worker may have many different perspectives than your.

One thing has not changed: good Union workers still expect good Union staffers, to safe guard their interests. Those same workers will have strong and well-informed opinions on what they want in their contract.

I'd bet that 'No Jab, No Job' is a non-starter among IATSE folks.