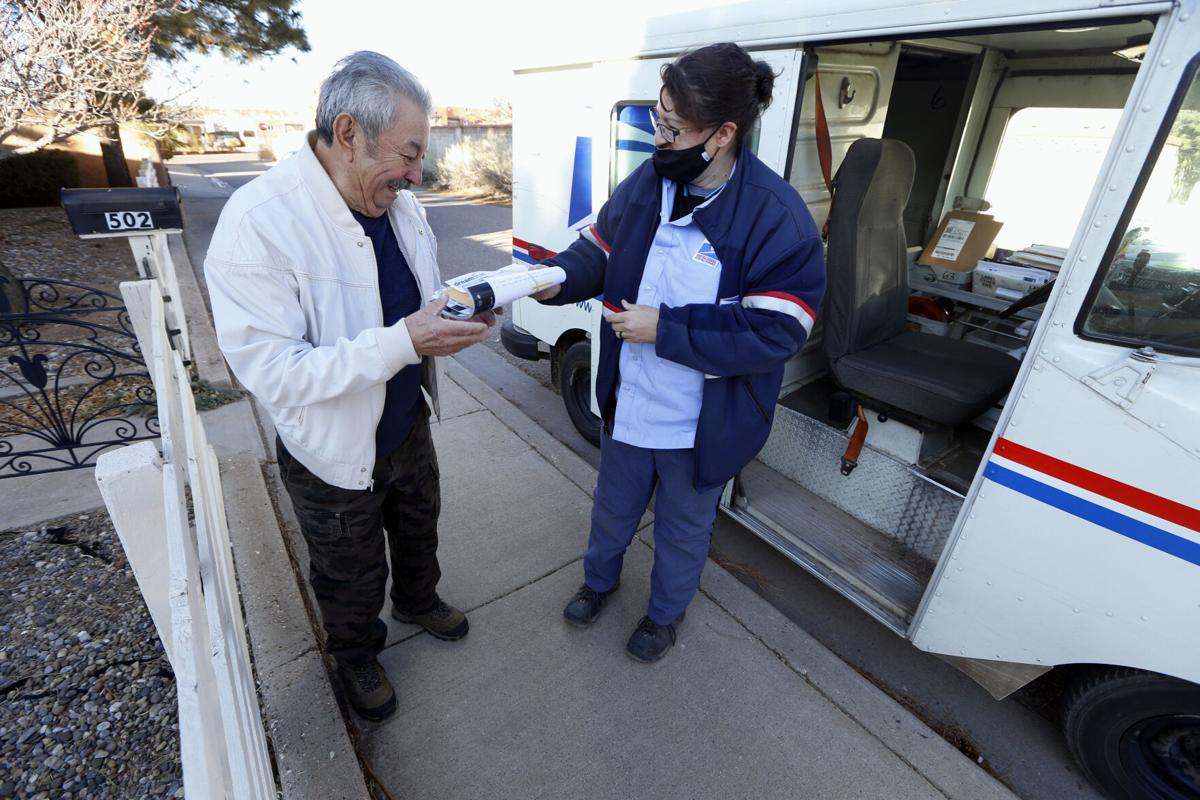 Postal worker Melissa Garcia hands mail to Joe Garcia (no relation) at his home Thursday. The postal worker had noticed newspapers piled in front of the 82-year-old’s door and grew concerned. He had been unable to get up from his floor for days. 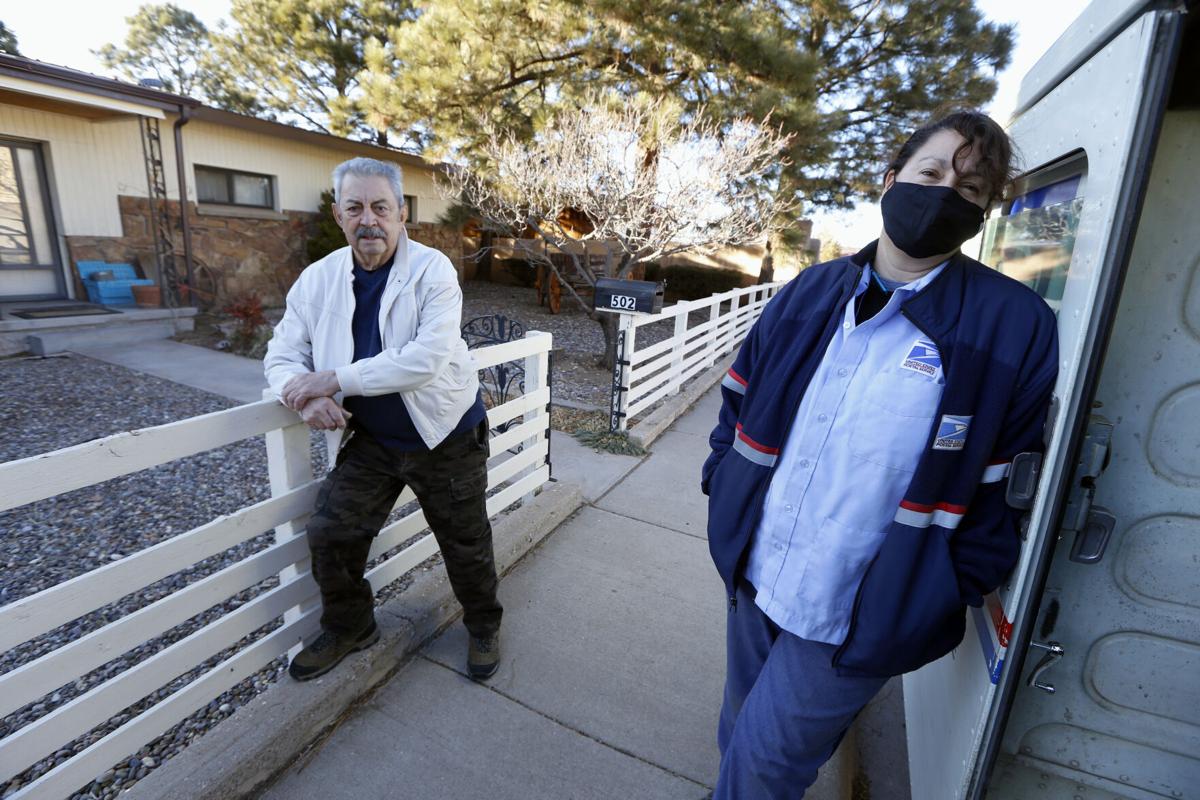 Postal worker Melissa Garcia stands with Joe Garcia outside his home Thursday. ‘I wasn’t dead, but I was close,’ Joe Garcia said. ‘Thank God for her I’m still around.’

Postal worker Melissa Garcia hands mail to Joe Garcia (no relation) at his home Thursday. The postal worker had noticed newspapers piled in front of the 82-year-old’s door and grew concerned. He had been unable to get up from his floor for days.

Postal worker Melissa Garcia stands with Joe Garcia outside his home Thursday. ‘I wasn’t dead, but I was close,’ Joe Garcia said. ‘Thank God for her I’m still around.’

Melissa Garcia, a four-year veteran of the U.S. Postal Service, was fatigued from the pre-Christmas rush Dec. 18 and ready to move on to her next stop when she noticed three days of newspapers in front of a house on her route.

She decided to knock on the door of 82-year-old Joe Garcia, no relation, just to make certain he was OK.

She got no answer.

“His house is like the last hour of my route. At that point, I’m usually doing a countdown in my head to the end of my shift,” Melissa Garcia recalled. “It was really cold and dark.”

Concerned, Melissa Garcia started asking neighbors if they’d seen Joe Garcia. They hadn’t. One was mystified why smoke from Joe Garcia’s chimney — a common sight — wasn’t billowing and hadn’t in the past few days.

The mail carrier called police, who showed up to make a welfare check. As they knocked on the door, and Melissa Garcia tapped on a window, a faint cry came from inside the house on Escudero Street.

It was Joe Garcia.

That help — and Melissa Garcia’s willingness to go the extra mile — probably saved Joe Garcia’s life. He had fallen down his basement stairs Dec. 15. He said he was able to climb back to ground level, but couldn’t reach his cellphone on a counter above the cold tile floor.

“I wasn’t dead, but I was close,” Joe Garcia said in a telephone interview. “Thank God for her I’m still around.

“I was so thirsty. My mouth was blistered,” Joe Garcia said. “I remember hearing voices outside and just trying to yell.”

Joe Garcia, who lives alone — his children are out of state — said he spent a week in the hospital and is now back to walking under his own power.

Melissa Garcia, a Capital High School graduate who spent 27 years in retail before joining the Postal Service, said she can have as many as 650 stops on her route. She’s on the street six or seven hours most days, and she said she enjoys making connections with people, though they have to be short so she can complete her work.

“We don’t have a lot of time to hang out and talk to somebody,” she said. “But I would talk to Mr. Garcia periodically.”

She said she’d engage with Joe Garcia about the weather during the summer months when he was working outside or in his yard.

In the back of her mind, she said, she thought of an incident in her own life a few years back. Her daughter, Hanna Garcia, had noticed her grandfather’s door locked late into the afternoon. That was unusual. Alertly, she tipped off her mother. A close check revealed he was in need of emergency medical assistance, Melissa Garcia said.

Those kinds of experiences, she said, stay with a person. Even on a cold December night when the shift is almost over.

“Young and old,” Melissa Garcia said, “we should probably all check on each other.”

Wonderful and just what we need

Beautiful. In this stressful time we're living in - thank you Ms.Garcia, for reminding us that one person really can make a dfference. Thank you.

Melissa your caring is a wonderful trait. You most likely saved Joe's life. - And you've given hope knowing people like you act on your concerns. Thank you.

Please have your older relatives and friends get some type of life alert. I’m a nurse and have had numerous patients that have had this same experience. Some in good physical condition who fell and were down for several days before someone checked on them. If you live alone and are 65 or older please consider life alert.

Another example of the value our postal workers bring to a community.

Thank you Melissa, for caring and going the extra mile.

Great to hear that Mr. Garcia will be fine. What a horrible experience. Glad Melissa did go the extra mile. Makes me feel good that we still have people in our community with big hearts.

Excellent news that Mr. Garcia has recovered. I wish more people acted on their instincts and went the extra mile the way that Melissa Garcia did. Just an occasional phone call to someone you know lives alone can make a difference, especially in COVID-19 times.

An angel, you just never know where they are. I hope she gets a commendation from the city.