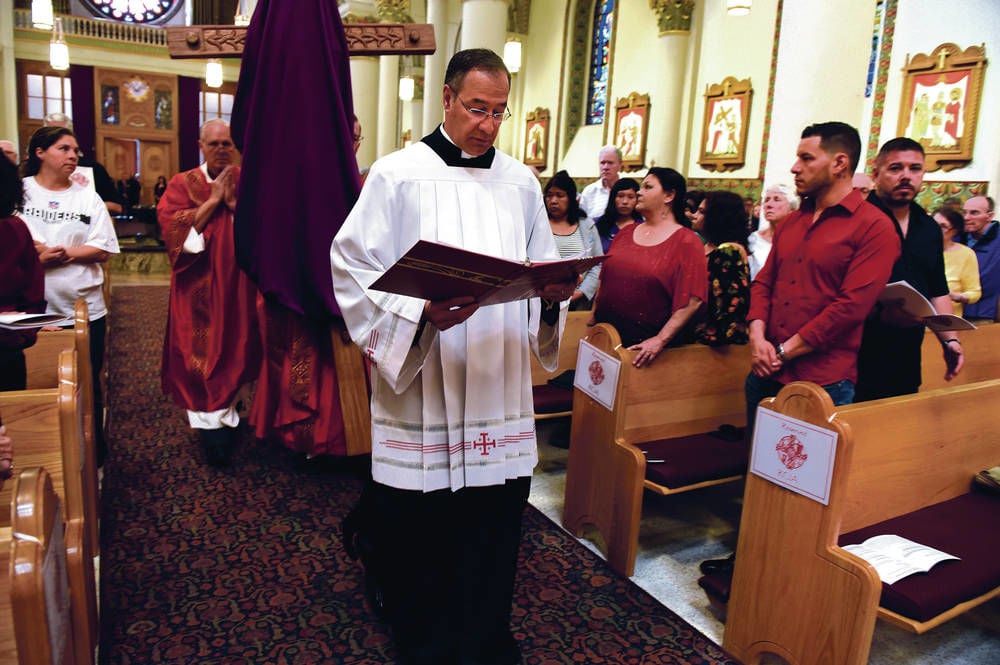 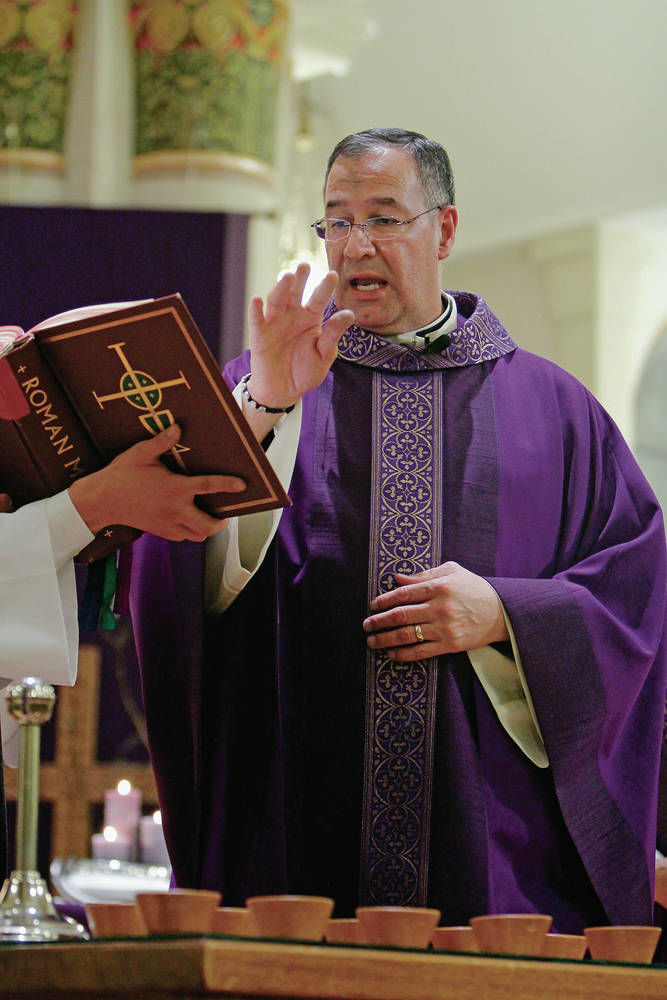 The Rev. Adam Lee Ortega y Ortiz celebrates Ash Wednesday Mass last year at the Cathedral Basilica of St. Francis of Assisi. The priest on Sunday apologized for his monthslong absence and said he was stepping down, spurred by ‘personal challenges … some of which have been particularly difficult for me.’ Luis Sánchez Saturno/New Mexican file photo

The Rev. Adam Lee Ortega y Ortiz celebrates Ash Wednesday Mass last year at the Cathedral Basilica of St. Francis of Assisi. The priest on Sunday apologized for his monthslong absence and said he was stepping down, spurred by ‘personal challenges … some of which have been particularly difficult for me.’ Luis Sánchez Saturno/New Mexican file photo

Near the end of Sunday’s 10 a.m. Mass at the Cathedral Basilica of St. Francis of Assisi, the Rev. Adam Ortega y Ortiz fought back tears as he told parishioners, “I love you.”

That statement may have been the last the sometimes-controversial rector of New Mexico’s best-known Roman Catholic church makes to parishioners. At multiple services Sunday, Ortega y Ortiz announced he is ending his tenure at the cathedral.

He wouldn’t specify the reasons behind his departure, but acknowledged it was spurred by “personal challenges … some of which have been particularly difficult for me.”

He said he needs more time to deal with these problems and that Archdiocese of Santa Fe Archbishop John C. Wester authorized a leave of absence.

Ortega y Ortiz then said, “it is prudent that I conclude my service to the cathedral,” indicating he will not be returning

As he left the church following the midmorning Mass, Ortega y Ortiz declined to comment further, simply shaking his head “no” when asked if he would say more.

Wester also declined to comment, other than to say the archdiocese — rocked by the decision to file for bankruptcy in the face of civil lawsuits that allege sexual abuse by some members of its clergy — will choose a successor early next year.

In the interim, the Rev. John Cannon of San Isidro Parish will oversee both that church and St. Francis.

Ortega y Ortiz’s announcement ended months of speculation about the priest’s whereabouts. He had not celebrated Mass at the downtown cathedral since at least early October, raising questions as to where he was and why he was absent.

On Sunday, he returned, albeit briefly. Clad in black slacks and a bright red sweater, Ortega y Ortiz entered the cathedral from a back room shortly before all three morning celebrations came to an end.

Each time, his voice broke as he thanked his family, friends and parishioners for supporting him.

He called the 6½ years he served at the church as a “richly rewarding experience” full of “countless graces for which I am grateful.

“I sincerely apologize for any anxiety my absence has caused you for the last three months,” he said.

Ortega y Ortiz, in his early 50s, is one of the area’s best-known Roman Catholic priests, having spent 18 years in Santa Fe, first as pastor of Santa María de La Paz on the city’s south side, and most recently at the cathedral and as pastor of Cristo Rey. Known to many simply as Father Adam, he grew up in the city and is a graduate of St. Michael’s High School.

Ortega y Ortiz was the subject of church investigations into his behavior in November 2013 after a former music director, Xavier Gonzales, complained in a letter to the archbishop that Ortega y Ortiz created a hostile work environment and was prone to “crude and inappropriate behavior” including “an inability to keep his hands to himself.”

At that same time, critics said some of his actions were driving parishioners from the church.

Later that month the church publicly cleared Ortega y Ortiz of any wrongdoing. At that time he said in response, “There will always be those who will find something wrong and misinterpret my actions or choose to see things in a negative way. For every one of them, there are hundreds more who understand and trust my work and are wanting to share in this great ministry.”

After Ortega y Ortiz made his announcement Sunday, many at the 8 a.m., 10 a.m. and noon services stood and applauded as the priest disappeared into the back room. Some wept or expressed looks of shock or sadness. Others seemed to accept the news as an inevitability and displayed little emotion.

One parishioner, who declined to be identified, said, “At least now we know. We deserved that much.”

Another woman, who said she worked with Ortega y Ortiz and who also declined to be identified, called The New Mexican on Sunday to say his presence will be missed.

“He was such a figurehead for the church,” she said. “I don’t think everybody got along with him or always liked him, but in looking at the people’s faces in the church today, it’s clear he was obviously cared for.”