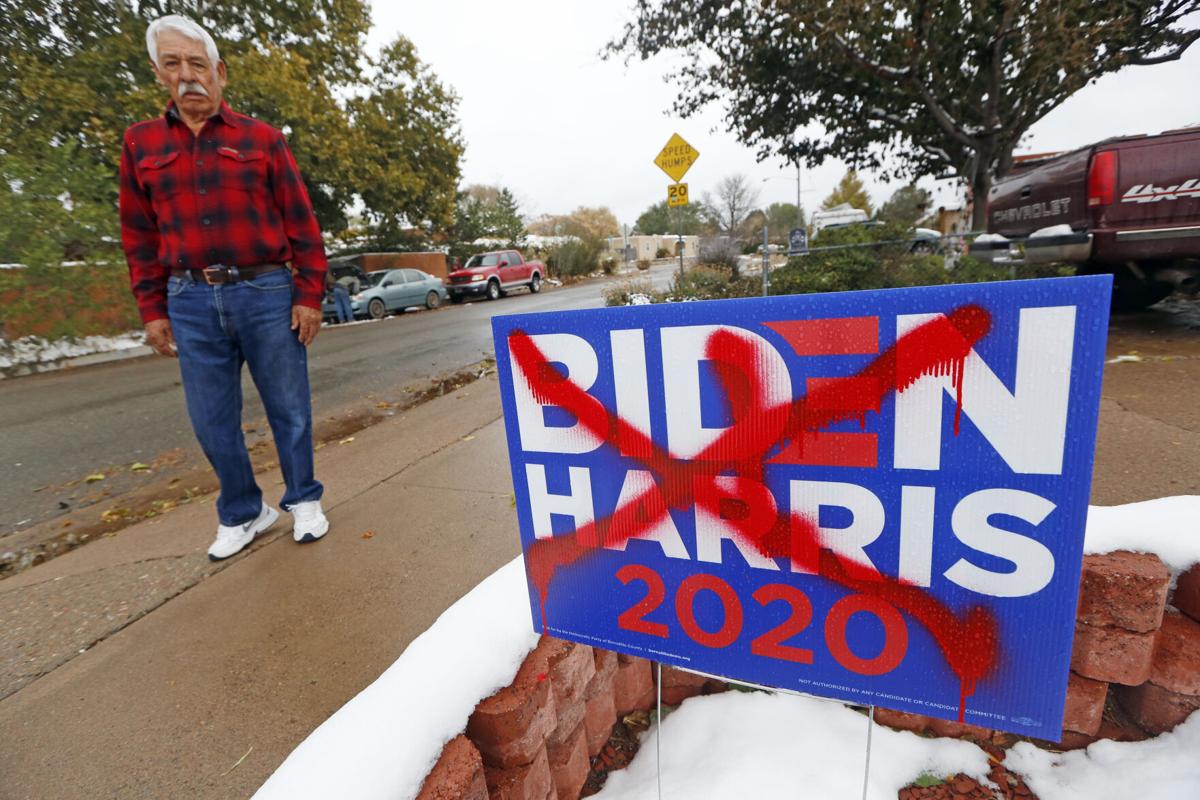 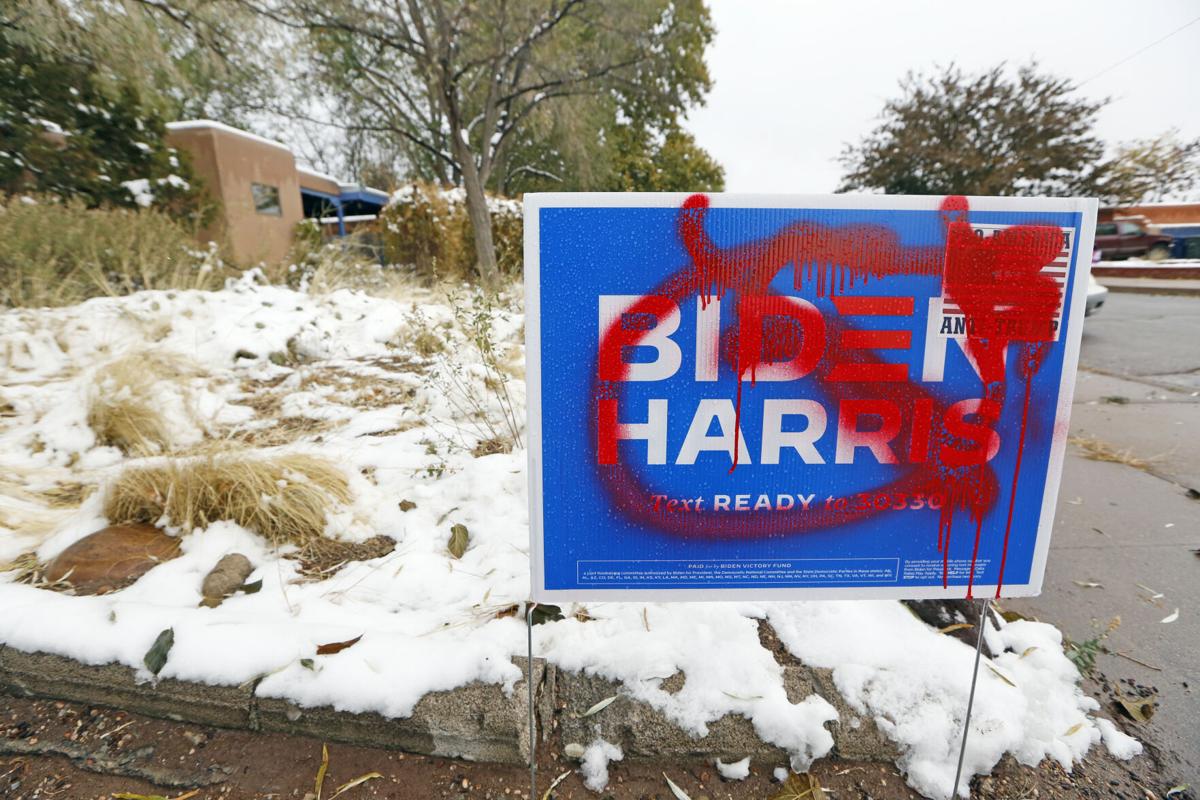 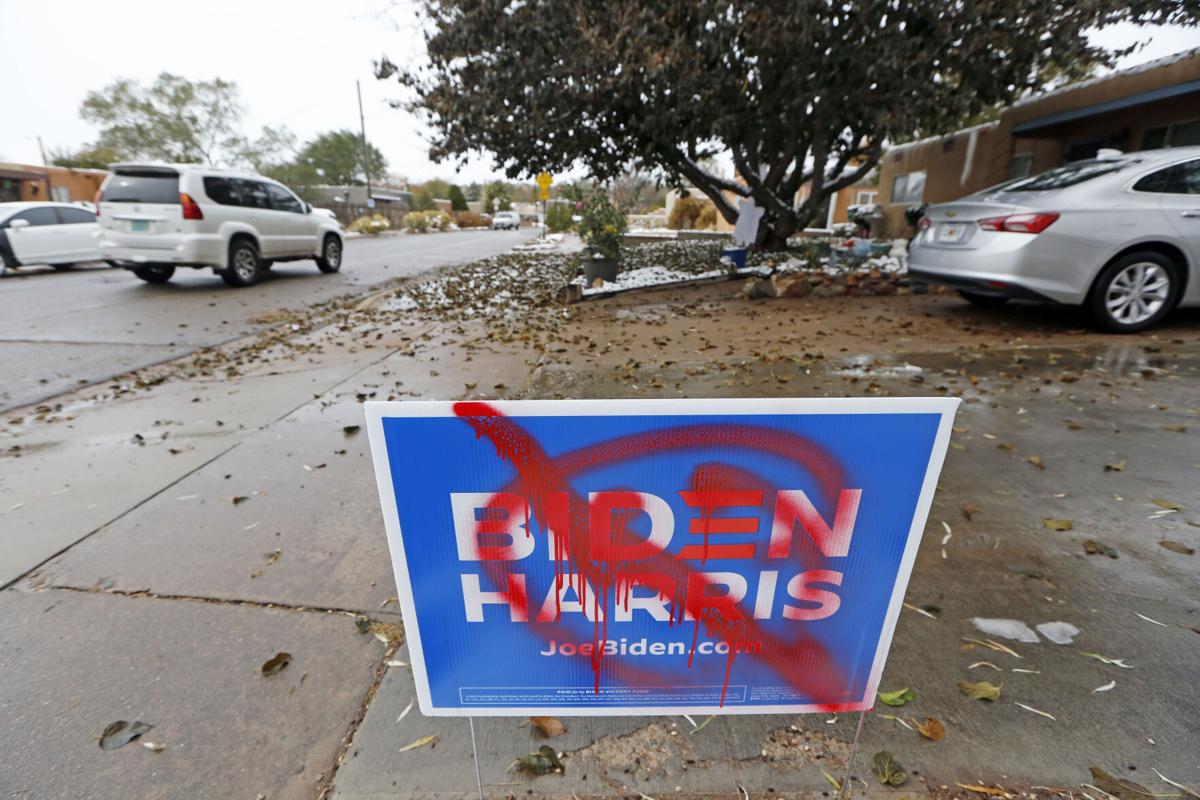 Santa Fe County residents are reporting a rash of vandalism and theft of political signs as the nation heads into the homestretch of a highly polarized presidential election.

“This is just a nasty time,” a woman who lives in the South Capitol neighborhood said Wednesday. She requested her name not be published over fear of retaliation.

The woman said she had three Biden-Harris campaign signs stapled on her fence, and all three were vandalized overnight with red spray paint.

“As I walked on, I realized there’s no Biden signs anywhere — they’ve all been taken,” she said. “It was kind of remarkable how many there were — they were the kind that you stick in the ground, you know? — and they’re gone. They’re just all gone.”

The theft and vandalism isn’t limited to the Democratic ticket.

In the past few months, signs of Republican candidates also have been targeted, said Mike Curtis, a spokesman for the state GOP.

“Criminals have targeted the party by destroying, defacing and stealing them throughout the state,” he wrote in an email, adding that most have been President Donald Trump signs and that there’s been an increase in such incidents.

“These crimes are acts of hate, cannot be tolerated, and there’s no place in our society for these despicable attacks,” Curtis wrote. “We condemn these heinous acts whether they’re aimed at Republican or Democratic candidates.”

The Democratic Party of New Mexico has received reports of Biden-Harris signs either being stolen or vandalized, spokeswoman Miranda van Dijk said.

“I think that people are very passionate this election cycle, and tensions are high,” she said. “As a party, of course, we’re encouraging everyone to put that passion and that enthusiasm into productive outlets — things like phone banking, texting, just getting involved — absolutely not destruction of anyone’s property.”

Sascha Anderson, who lives in the Casa Solana neighborhood, said “politically motivated” vandalism has been occurring there as well.

“Last night was the most recent attack in which our Black Lives Matter signs [murals by a local artist] were all painted with red spray paint with words such as ‘racist,’ ‘bigot,’ and ‘Blue Lives Matter 5.0,’ “ she wrote in an email.

“My other neighbors with the murals have also, in past weeks, had their signs egged, their car windows smashed out, and one neighbor had someone attempt to throw a rock through her window,” Anderson added. “Needless to say, we all feel pretty violated and upset.”

Plenty of Trump signs are getting vandalized or stolen too...just not so much in Santa Fe, being that it is quite liberal. I trust you find that equally unacceptable....but I have my doubts.

I hear you. I haven't looked for stories for vandalized Trump signs. Young family down the street are big 45 supporters, flag, signs, bumper stickers and his Trump flag got a 1/4 of it cut out. Our neighborhood got about 5 Biden signs spay painted, 4 stolen, and 4 Lujan signs stolen and a mail box spray painted red. Doubt no more lol

David Brooks wrote an essay in the NY Times on this subject, to the effect that there is very little left of the floor of decency.

Typical of these vandals. Striking in the dead of night or the early morning hours. Reflective of how cowardly they are. I believe my German Shepherds would love to make their acquaintance. Some humans make great play toys for my dogs.

Frankly, what do people expect? Posting your political preferences outside your home is a call for attention. Do folks really think a yard sign will change people's hearts and minds? Don't make yourself vulnerable to these types of attacks - contribute to your preferred party in a more meaningful way instead. You can canvass, donate money, work the elections, or write letters. Signs don't work and just create trash.

So are you saying that those who put signs up advocating for a candidate or a cause deserve this treatment? What exactly are you saying?

That picture was taken just down the street from me and the vandalism not toofar away. Such conduct needs to be deplored rather than you seeming to make excuses for it by suggesting yard signs deserve to be trashed.

Nope, not saying they deserve it - you might want to check the post again. But in today's heated clime, we shouldn't get in a flap when our signs get defaced - we're asking for it, after all.

I disagree. One does not deserve defacement or vandalism for offering a public opinion. That just means we all face intimidation. We are no more asking for vandalism by posting a sign than a woman is asking for it by dressing in a sexy dress. Etcetera.

Don't you believe in the First Amendment, Kathy? And what is to say that the people who post signs are not contributing in other ways. Lots of assumptions in your post.

My anti-Biedscheid signs were taken which just shows the level of desperation some politicos have--Biedscheid is running unopposed. No vote for Biedscheid. Maybe when he gets less than 50 percent of the total number of voters, he will get he is a judge not god.

Interesting to hear you and Khal jump to conclusions. Sorry this issue is so precious to you, but it's naive to think that your yard sign will impact even a single voter. Sorry to hear about your yard signs - but once again, I suspect your energies can be better spent elsewhere.

"...But in today's heated clime, we shouldn't get in a flap when our signs get defaced - we're asking for it, after all..."

Again, I ask if you are rationalizing such conduct or if you think it is wrong. The idea that one can be assaulted, vandalized, silenced, outed, or otherwise made a social pariah due to one's (presumably reasonable) opinions is on the table. We are not talking about holocaust deniers or the like. Just people who want to put a sign on their lawns supporting their candidate. Why should we be made to feel like we are "asking for it"?

Ever wear a short skirt to a bar, Kathy?

Must be a slow news day.

The community does not have a voice, a traditional college, or town hall meetings to discuss issues.

I guess these vandals/thieves are doing this because they want to upset people....it certainly can't be because they fear that voters will be swayed one way or another...I mean, who votes based on a sign?

A testament to their mentality. As if taking signs or vandalizing them will make a difference. People with such anger should seek medical attention!