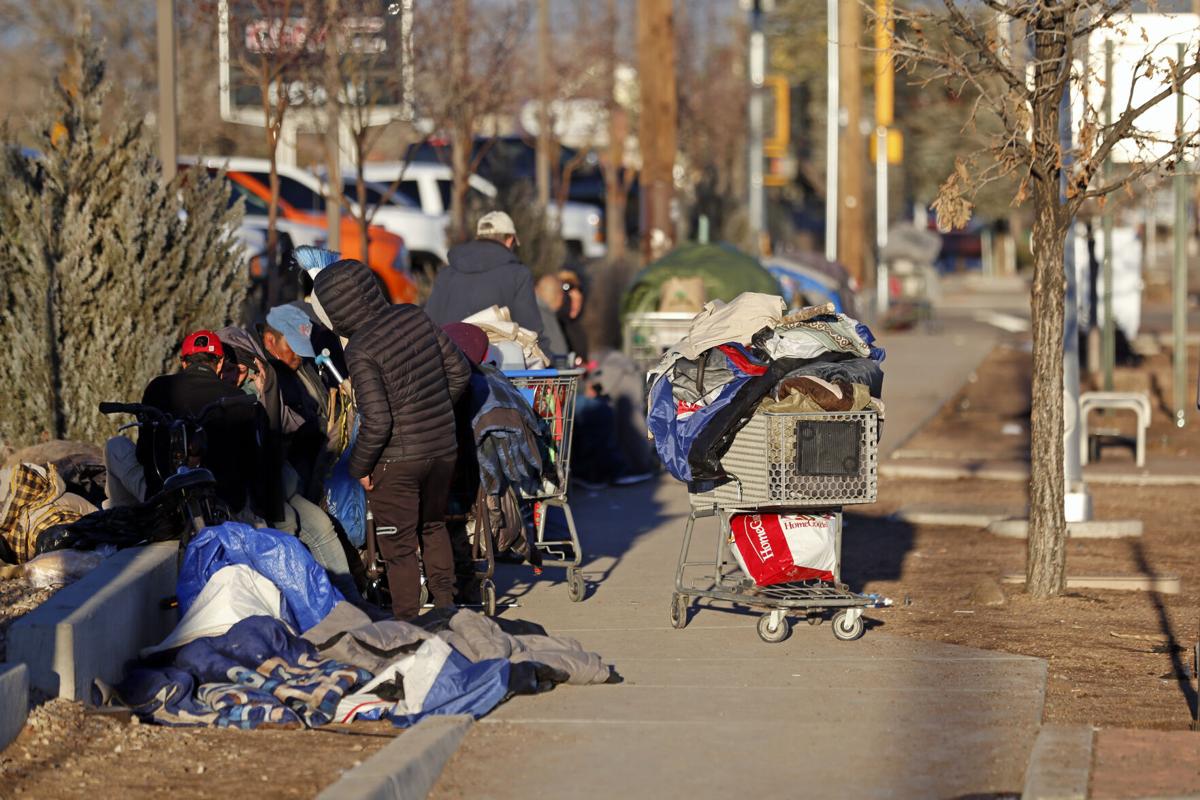 Homeless people wait on Cerrillos Road on Wednesday afternoon for the Interfaith Shelter at Pete’s Place to open for the night. Interim police Chief Paul Joye is increasing officer presence in the area. 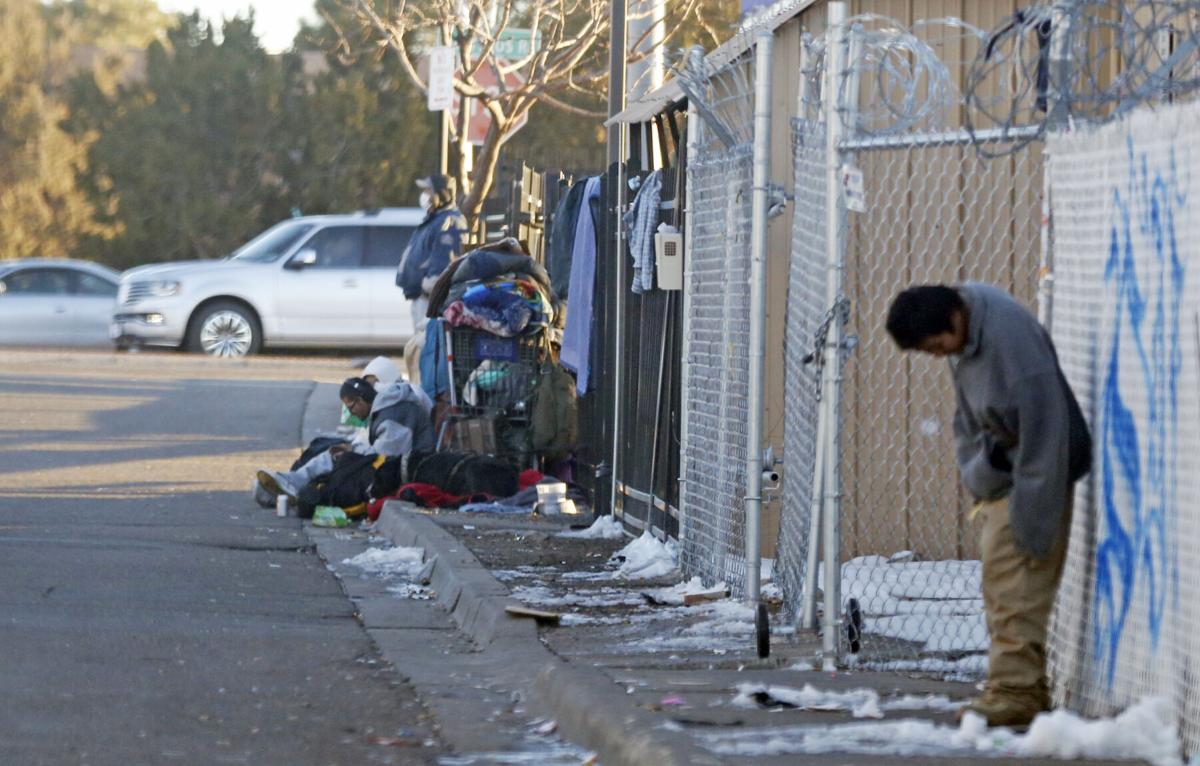 Homeless people wait on Harrison Road near Cerrillos Road for the Interfaith Shelter at Pete’s Place to open Wednesday afternoon. Responding to complaints, the Santa Fe Police Department’s bicycle team has increased its presence in the area.

Homeless people wait on Cerrillos Road on Wednesday afternoon for the Interfaith Shelter at Pete’s Place to open for the night. Interim police Chief Paul Joye is increasing officer presence in the area.

Homeless people wait on Harrison Road near Cerrillos Road for the Interfaith Shelter at Pete’s Place to open Wednesday afternoon. Responding to complaints, the Santa Fe Police Department’s bicycle team has increased its presence in the area.

People driving past Harrison Road might have noticed members of the Santa Fe Police Department’s bike team staging meetings in the area during the past few weeks.

The meetings are part of a joint effort between the city and Interfaith Shelter at Pete’s Place to help address concerns over the growing crowds on the road outside the low-barrier homeless shelter. Interim police Chief Paul Joye described it as an effort to help clean up the environment around the shelter.

On Wednesday, Joye said Harrison Road will effectively be the bike team’s “headquarters” for the time being.

The operation is set to continue for a few weeks and will be extended as needed, Joye said.

“We really want to let the results dictate the actions here,” he said. “What feedback are we getting from the shelter? From the folks who live and work here and what capacity we have with the bike team itself? It is a flexible operation, but for the time being, that is going to be their primary focus.”

Harrison Road has been a source of consternation for business owners and residents who have long complained about violent threats, cluttered sidewalks, open drug use, trash and trespassing.

Some of those business owners and residents sued the city over the conditions on Harrison Road, including the owner of Z Pet Hotel, which recently shuttered over concerns about the shelter.

“This was prompted in large part due to community concerns, but also by her,” Ochoa said. “We saw it as an opportunity to double down on making sure that the shelter can be a good neighbor to the people who live and have businesses on Harrison.”

While the city still has some gaps in its street outreach capacity, Ochoa said, it has funded a mobile hygiene unit and more street outreach workers to help discuss potential service options with homeless people.

This is America right now folks: Small pockets of the super super rich surrounded by homeless and minimum wage slaves who can barely get by. This is what you get when you listen to cynical demagogues tell you for over 40 years that “government is the problem”. It was Ronald Reagan who defunded federal assistance for mental health, and it’s been every Republican since who campaigned on tax breaks for the rich. (And I’m not giving the Dems a pass either.). You are literally getting what you didn’t pay for. And you have allowed demagogues to tell you that the poor and the homeless are grifters taking “your money”. There is a small percentage of the population that is simply incapable of holding down a job or being regular tax paying citizens because of physical and mental disabilities. What do you propose we do about it?

Last year State of NM was allotted 20 million dollars toward Homelessness. So why are people camping right outside of Pete's place along the outside fencing?

I'd hazard a guess that a significant portion is going to pay salaries at various "nonprofits".

Mayor Webber TAKE CARE OF OUR HOMELESS PROBLEM. This is a problem and very dangerous for the citizens of OUR city. Our CITY

Webber is definitely not a problem solver.

There is human waste, dirty needles and trash all over the place over there. That first picture shows what I have to deal with when I ride my bike along the side walk in front of Octane. Blocking the sidewalk almost every time I go by there.

Harrison Rd. is turning into the Skid Row of Santa Fe.

Where are they going to put this "mobile hygiene unit"? They already do not have enough parking. They need to move the shelter to another much larger site that can accommodate to needs.

What a JOKE!!! Move the shelter! PERIOD.

Mark, my guess at why: it's in his back yard.

Jonny Duran, I have a better idea. Turn the property over to St. E's let them use the location as a main office. Edward Archuleta will use the location wisely. NO more getting services without ID. The public needs to believe they are helping those in need not harboring fugitives.

Heartening that the effort includes a mobile hygiene unit and outreach, not attempts at blunt use of force. As "median price for Santa Fe home crosses $500,00" we certainly can afford to be taxed more to provide for those so desperately poor.

Speaking for my home, there is not an ATM at the front door to pay more taxes even though the value has gone up. I pay more than enough in taxes for half baked initiatives. A school district with with sharply declining enrollment just re-upped the tax to renovate buildings but no discussion on consolidation. Yes, there is a huge homeless problem, but not everyone has the means to pay for the solution. Nobody wants the shelter in their neighborhood, NO ONE. Why don’t you volunteer to pony up the cash and a solution?

Please get a grip.

Daniel, I don't relish taxes, but Santa Fe has a lot of very well-off people. And I already donate to the shelter, thanks.

The State has $20 million dollars already allotted to help solve homeless problems. They can purchase acres of land, build a shelter 3 times larger than Pete's place with adequate parking spaces, and portable toilets. Gov. Grisham would rather move the 💰 into her pocket. And as far as Mayor Weber, he is from California. So that should explain why the street there is starting to look like L.A. homeless camps.

yes, maybe but ABQ is the 3rd most affordable rental market in the country. Still too expensive for some but its not the 500k houses that are causing the homelessness. Its the lack of truly affordable housing for the destitute.

Emily, the property tax was set at a max increase per year to keep from forcing people out of their homes, my mother in-law is 90 and on a fixed income and has lived in her home almost 70 years and deserves to continue to live were she is without being taxed out of her home. Your proposal can be afforded by transplant wealthy not local working class. With all the new home sales, the city and county will collect property tax based on the sale price as a base and increase from that point 3% per year. If we stopped the panhandlers and let that money people give go towards these programs you would get more benefit.

Even Texas had tax caps for categories of folks like your Mom, and we should, also. I'm not advocating taxing the little guys more. (If someone lives in a house over the median, maybe they can get a reverse mortgage?)

Sad that it takes a lawsuit and people closing their businesses to get the attention of the City. Only one City counselor responded to my suggestion to look into the old Volvo dealership as an alternative and she didn't have much to say.