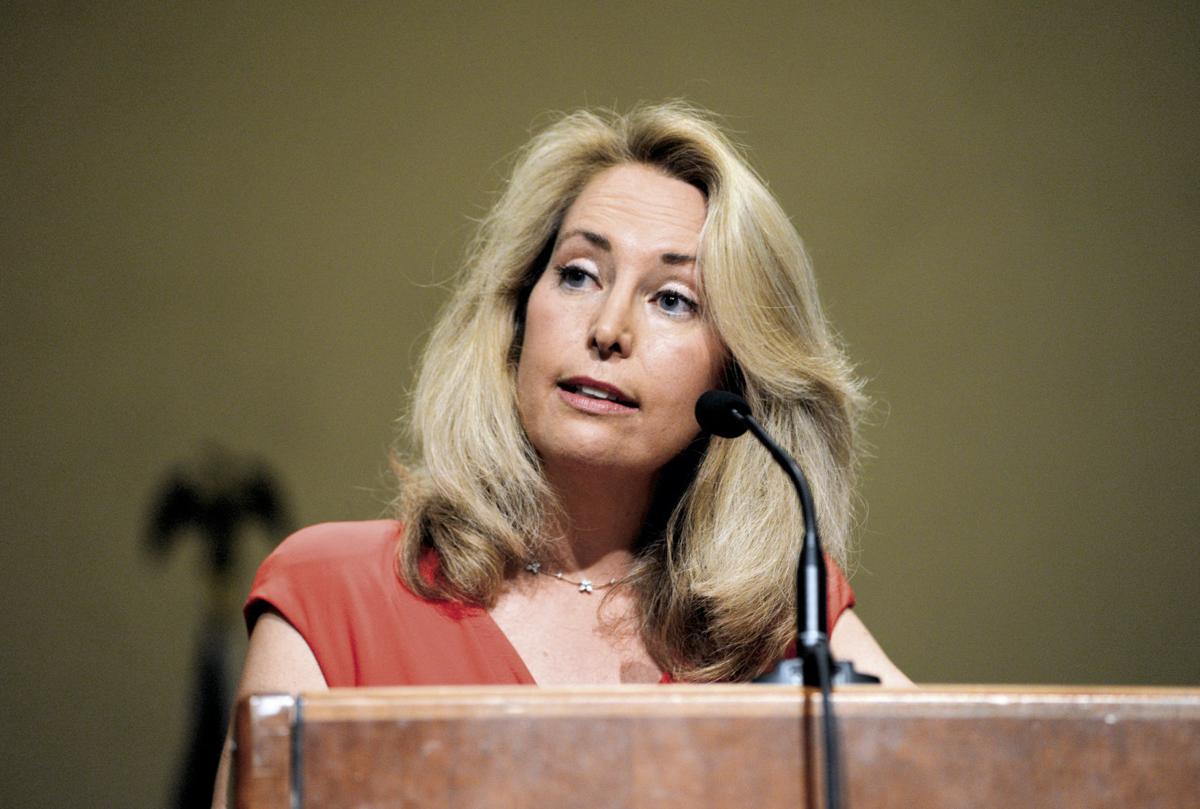 New Mexican file photoFormer CIA agent Valerie Plame, speaking in 2015, says she has returned to Twitter to push back against President Donald Trump.

Former spy Valerie Plame still works in a secluded nerve center, though this time it’s unintentional. Her rented campaign office is in a hard-to-find space on the third floor of a building near Santa Fe’s historic square.

A rendering of a Navajo Code Talker who helped defeat the Japanese in World War II adorns a wall of her stark quarters. A bracelet emblazoned with the word “vote” is on Plame’s wrist. Twitter is on her mind.

Plame has returned to the social media forum where she wrote her way into trouble in 2017. She had avoided Twitter even after becoming a Democratic candidate for the open congressional seat in Northern New Mexico last May.

Republican President Donald Trump brought her back to the keyboard. Plame, once an operative for the CIA, described Trump as a reckless opportunist after he issued the order to kill an Iranian general. Plame said she was worried enough about disastrous fallout to tell her 49,000 followers on Twitter what she thought of the president.

“An ‘imminent threat.’ Fabricated intelligence that will lead to the loss of American lives. A cynical attempt to become a ‘wartime president’ to ensure re-election. We’ve seen all of this before,” Plame wrote. “Because we’re on the verge of another catastrophic war in the Middle East, I’m trying a restart on Twitter — a platform I left because of its toxicity — to add a personal view on the abuse of power by a dangerous president. Hopefully, Twitter can still be a force for good.”

Plame, 56, said she never expected to run for public office or be in a position to publicly criticize the commander in chief.

At this stage of her life, she said, she believed she would still be working in covert operations. “I thought I would be overseas, chief of station in a really beautiful place,” Plame said. “I loved my job. No one knew my name. No one knew what I did.”

Her career with the CIA crashed to a halt in the form of political retribution.

Plame’s then-husband, the late U.S. diplomat Joe Wilson, wrote a piece in 2003 for the New York Times highlighting a faulty intelligence report that President George W. Bush had used to justify the invasion of Iraq. Wilson’s account saying Bush had gone to war over false pretenses riled an administration already being pelted with criticism.

Bush’s camp questioned if Wilson had received his information because of his wife’s work in the CIA.

Soon after, someone in Bush’s administration leaked Plame’s name and her clandestine job to conservative columnist Robert Novak. He printed it, killing Plame’s career with the CIA.

Her anonymity taken away, Plame began a new life. She, Wilson and their twins moved to Santa Fe.

Plame had served her country for 20 years but was not yet 50 when Novak outed her. Her resignation at a young age disqualified her from receiving a pension. She turned to writing books, including spy novels featuring an agent named Vanessa Pierson.

Politics followed. Plame considered running for the U.S. Senate when Democrat Tom Udall announced he would not seek a third term. “I thought about it for a hot minute,” she said.

The open seat in the House of Representatives seemed more winnable.

With her experience in foreign policy and intelligence gathering, she feels she is on sure footing in criticizing Trump’s aggression against Iran.

She said he has made life more dangerous for U.S. soldiers. “There is no stability. There is no coherent strategy,” Plame said from a seat in her campaign office.

She’s been on the national stage, too, appearing with MSNBC’s Chris Matthews on his Hardball program.

“I wanted to get in more points, but with Chris Matthews that’s impossible,” she said.

Her series of postings on Twitter gave her the range she wanted, an irony to be sure.

Plame in 2017 used Twitter to distribute an anti-Semitic article headlined “America’s Jews Are Driving America’s Wars.” She initially defended linking to the piece, then soon backtracked. She said she hadn’t read it thoroughly and was sorry for tweeting it.

Political adversaries continue to bring up that episode in the congressional campaign.

Plame says she has Jewish ancestry. Her great-grandfather on her dad’s side was a rabbi in Ukraine. This, she said, was a factor in steering her to attend Temple Beth Shalom.

“I am deeply enjoying exploring my Jewish heritage. And I’m doing so in a welcoming community,” she said.

“After the Twitter fiasco, for which I have apologized multiple times, I found my way to Rabbi Neil [Amswych] and we began our dialogue.”

Plame so far has campaigned in 13 of the 16 counties in the congressional district. Not once, she said, has any voter at a public event brought up the tweet about Jews or challenged her sincerity in attending temple.

Voters, she said, want to talk about cellphone service, education, bad roads and an array of other issues that have nothing to do with Twitter.

She and a half-dozen other candidates are seeking campaign contributions and petition signatures as they compete for a place on the June primary ballot.

Quarterly fundraising totals won’t be announced until the end of January, but Plame is confident of a good showing.

“I think we’re going to post some terrific numbers,” she said. “I have contributions from every county in the district and every single state in the nation.”

Then her campaign manager piped up, saying he average donation is $25 and change.

Democrats seeking the congressional nomination have “broad agreement in values,” Plame said. The question for voters is who will represent their concerns most clearly.

Plame says they know the kind of congresswoman they want. The former secret agent was being overt.

She made a point of saying New Mexico’s 3rd District will send a woman to Congress for the first time.

Valerie Plame is a bore.

Again the SFNM provides free publicity (with color photo) for this opportunistic dilettante.

When she was outed for multiple incidents of anti-Semitism on Twitter, she fled Twitter. Then stunningly embraced her Jewish heritage. And returned to Twitter to deal with Trump. Right.

With her name recognition and SFNM free promotion, she'll do well with donations and votes. Too bad, since she's not the most qualified candidate to represent northern NM.

I do not think that CIA operatives or station chiefs get to decide to bomb a country. And Dr Johnson you do know what confidential, top secret etc means? No you are not going to find out much and Plame cannot say much...period. It is called an oath. And even if she was more an administrator than a Mata Hari, who cares? Are you afraid of intelligent articulate women?

Plame was a low level analyst working in a windowless room in the back of the building. In other words a big nothing as in zero. Considering all the disconnected democrat nitwits already in congress we really don't need another one.

Driving a car in reverse at high speed might actually be a good thing to learn if one lives in the War Zone of Albuquerque, but its not what I consider a credential for my various congresscritters.

If someone like Mark Ronchetti can run for the Senate then Valerie Plame can run for any office she wants to. Ms. Plame has better credentials than a former TV weatherman to run for political office. She has some national connections that would help her bring home the bacon to New Mexico and New Mexicans. She has served her country before and would be an outstanding representative for all New Mexicans.

Our reliance on Federal pork has not raised New Mexico out of its economic doldrums. I would wager it has made us worse off, begging for that bacon rather than raising our own.

Like Michael, I'd like to hear less about the CIA and world affairs and more about Northern New Mexico. In spite of the Federal largesse coming into this state, we are still close to the bottom in things where we should be working to the top (education) and close to the top in things that are not so great (suicides, drugs, DWI, etc).

One question Ms. Plame could answer is how someone who made their living as a CIA analyst could have made such a collosal blunder as she did on Twitter. I believe her when she said it was an honest mistake, but really. CIA operatives presumably can't afford mistakes. One could bomb the wrong country or have a secret contact wasted.

What we really need is for all the candidates to come out of their foxholes and hold an open forum where they take uncoached questions from the public. Any takers out there?

Well said Khal, and I cannot find any definitive information about what it was she did at the CIA. I guess it is all "top secret", how convenient. Many imagine her as a modern day Mata Hari, using her female wiles to get secrets from men and save American lives, etc. I suspect the truth is much more mundane and uninteresting, but since she will not reveal it, we are left to speculate.......

This rich, elite, carpetbagging Fanta Se socialite (or is it socialist?) has done nothing but avoid tough local questions, like her position on Aamodt, in our valley when she was here. Her looks and celebrity are not enough for real people to vote for in the many places outside Fanta Se.