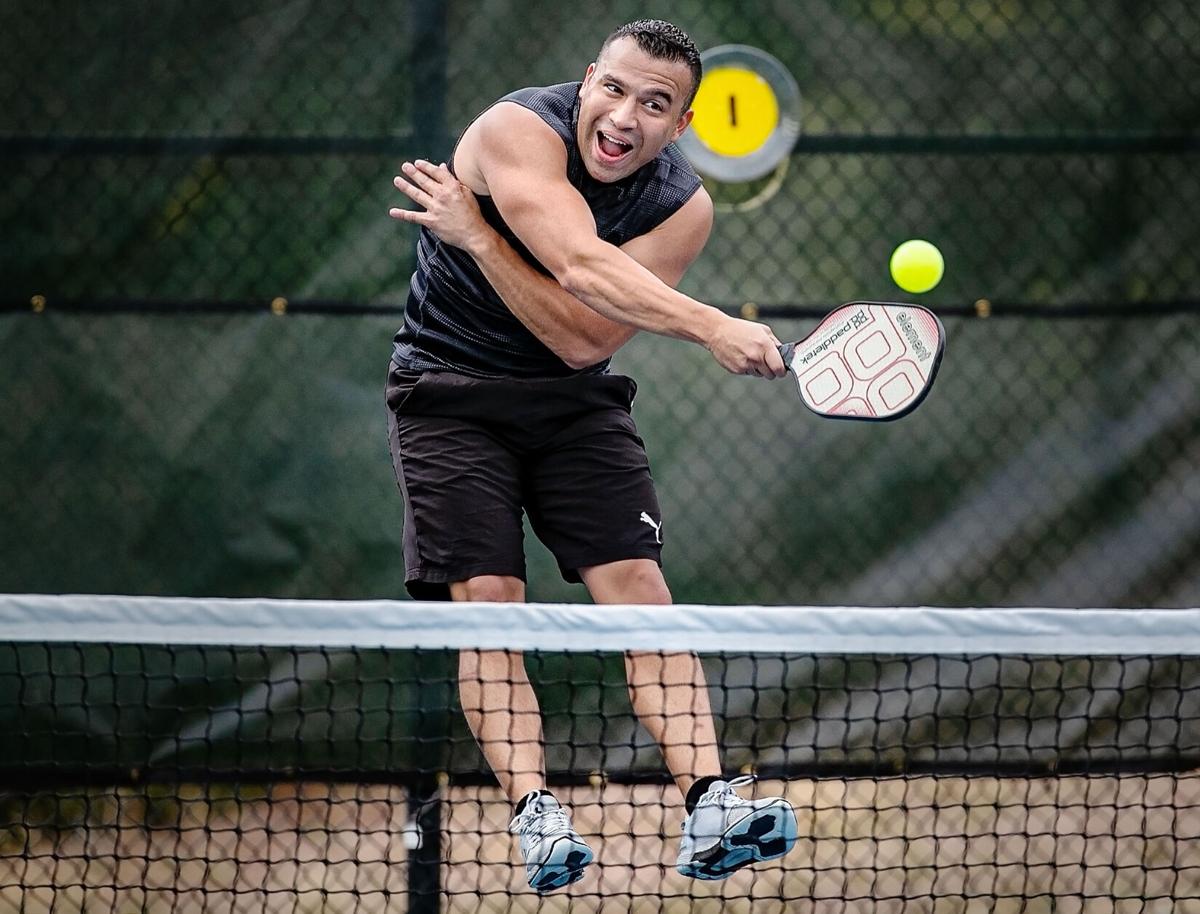 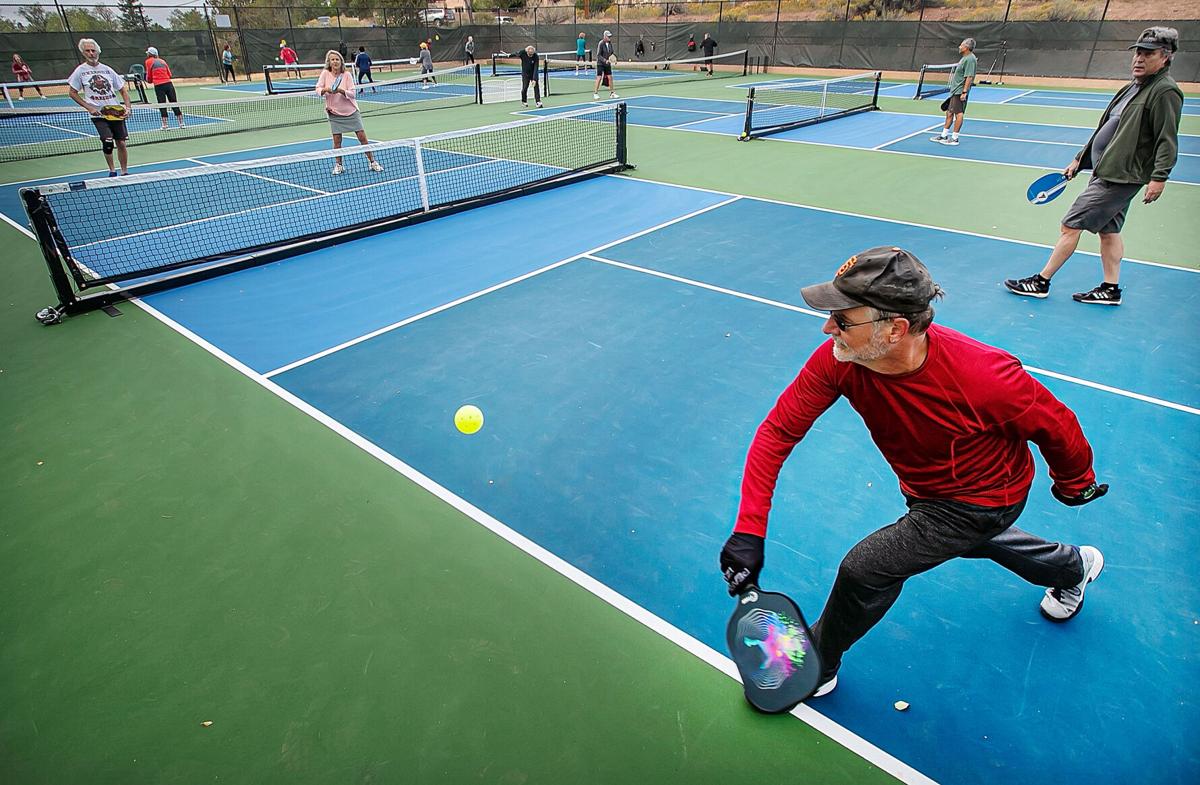 Larry Crosby lines up a serve return while playing pickleball Wednesday at the newly transformed pickleball courts at Fort Marcy park, which were full of pickup games by 10 a.m. The city recently converted a pair of tennis courts into six pickleball courts. The game has been rapidly growing in popularity in the last few years, especially among seniors. 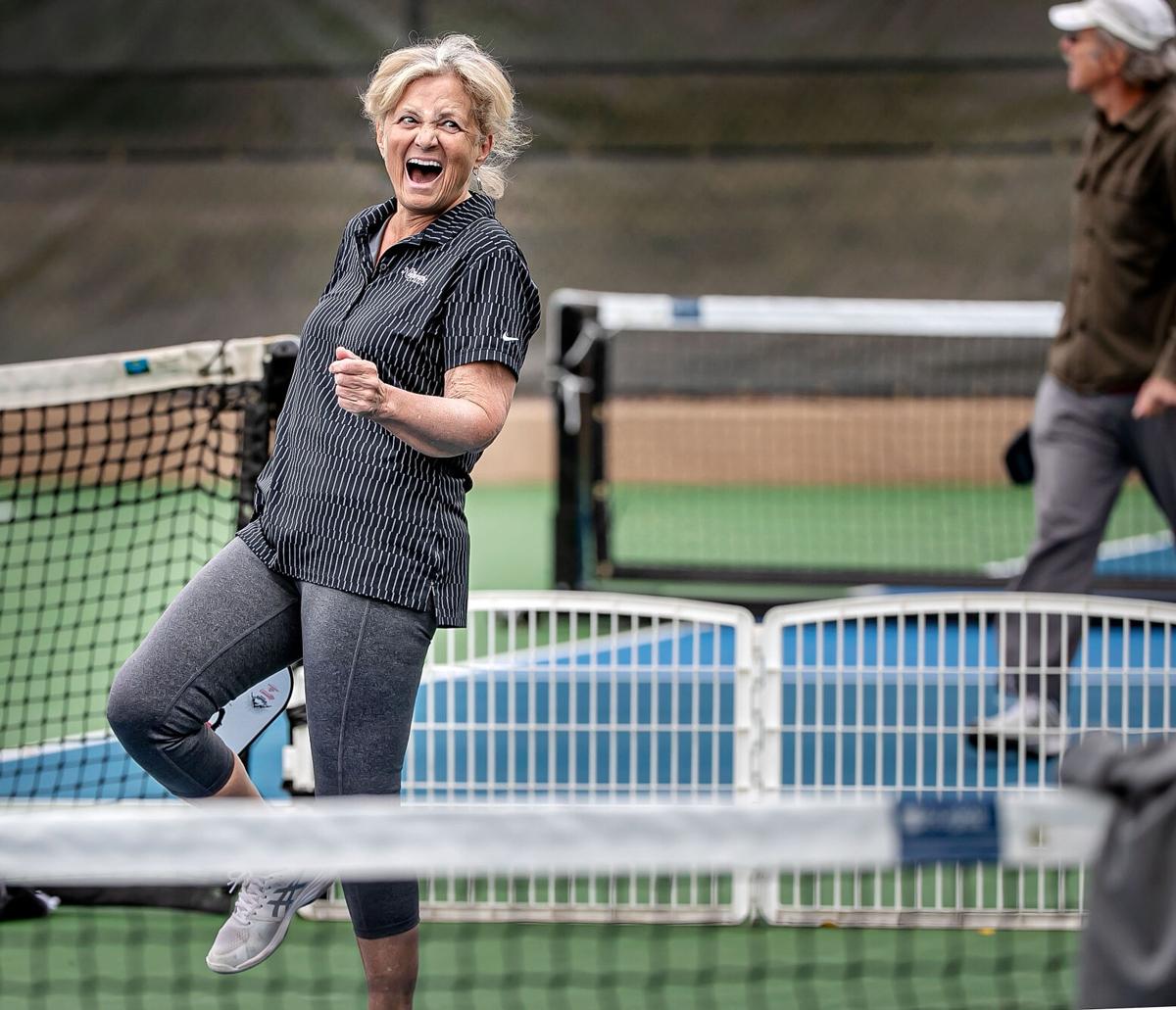 Marilynn Durkee reacts after scoring a point Thursday near the end of a pickup game of pickleball. 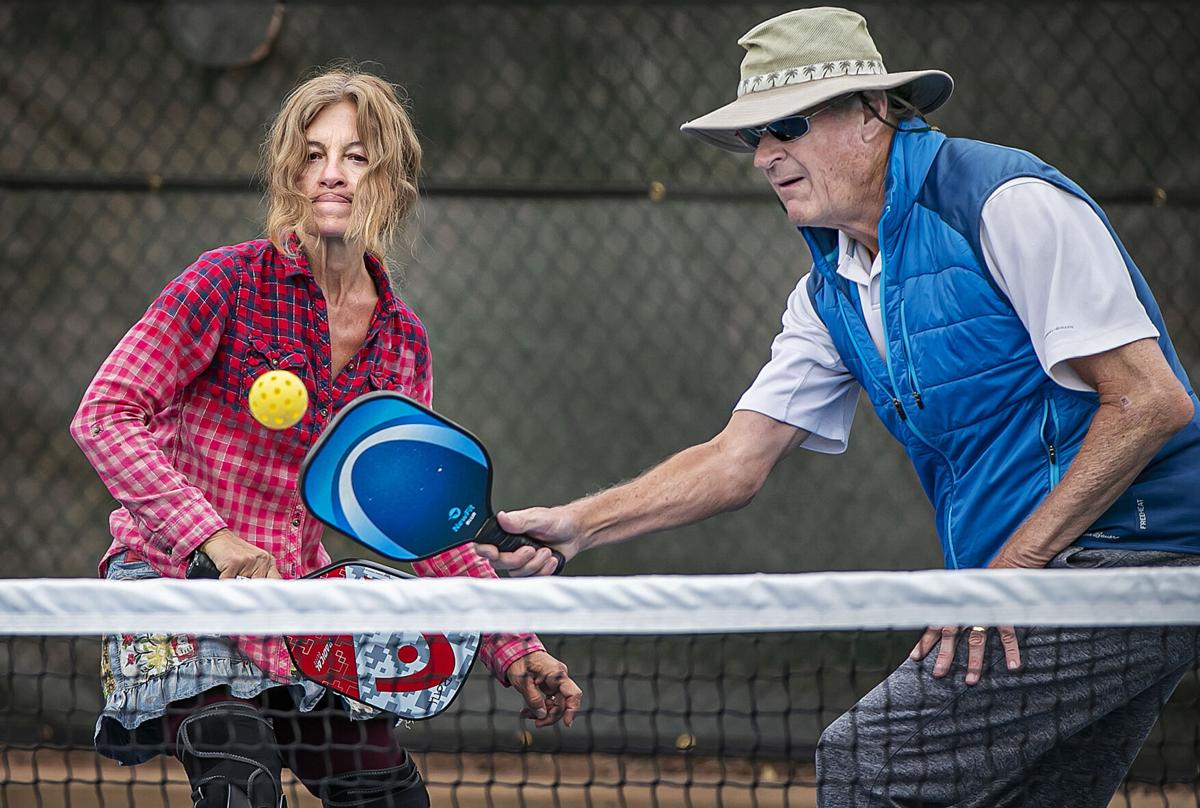 Susan Roth, left, backs up Craig Snowdon as he returns a volley while playing pickleball Thursday.

Move over, tennis, the fastest-growing sport in America is sweeping its way through Santa Fe.

Pickleball, a sport played with an oversized paddle and a baseball-sized whiffle ball on a surface about half the size of a tennis court, has found a permanent home not far from the Plaza.

On Wednesday, more than 50 people showed up for a ribbon-cutting ceremony to welcome six new pickleball courts at Fort Marcy park, courts that take the place of the seldom-used tennis venue that sat there for years. With luck — and a little funding from a public-private partnership brokered by the city — the area will soon double in size and eventually host regional and national tournaments.

“Can you imagine that, a tournament that brought people from all over the country to play this wonderful sport right here in downtown?” said Cindy Lawton, founder and president of the Santa Fe Pickleball Club.

By Lawton’s estimation, roughly 450 people play regularly in Santa Fe. Of those, 318 (and counting) are members of Lawton’s club. The group shares information about court availability, location of certain players and general discussion topics on an app that’s accessible to all members.

One of the more recent additions to the club is Santa Fe’s Allan Benitez. At age 30, he’s certainly one of the younger members. But in a narrative that’s echoed throughout the club, he said it didn’t take long for the sport to become part of his routine.

“When I was young, my dad played a little tennis and I played pingpong, but this — it’s definitely really addicting,” he said, recalling the day he saw a group of people playing pickleball about a year and a half ago.

“I went over and asked about it; next thing you know, I’m playing it all the time,” Benitez said. “Now that we’ve got courts and a place we can meet, it’s the real deal. I can’t wait to see how it grows from here.”

A physical therapist who often encourages her patients to try it, Lawton said the typical pickleball player is older and not necessarily a former tennis star. She estimates her club’s average age is in the 60s but, as players like Benitez show, it’s starting to appeal to the younger generations.

“It’s not nearly as strenuous as tennis because the area is so much smaller, but it’s a sport that does tend to appeal to the elderly because it requires some mobility without the demand for much physical exertion,” she said.

Melissa McDonald, the city’s interim Parks and Recreation Department director, helped provide assistance when the pickleball club went searching for city support. The transformation of Fort Marcy’s courts, which included repairs to existing cracks, new surfaces and paint came at a cost of less than $30,000.

McDonald said the city is aiming to continue a public-private partnership with Lawton’s club to continue expanding Fort Marcy’s footprint with plans to find other spots around town for pickleball.

“There’s been a high demand for this, and it’s a reasonable request that the city is able to handle,” McDonald said. “We were able to identify the Fort Marcy site as a place where we could take an underutilized space and give it to the people who have a need for it.”

There was an estimated 500,000 pickleball players around the country in 2017. A recent study found that number is now close to 3 million — and counting.

It reminds Lawton of the early days of her club. In 2019 a group of local enthusiasts pitched the idea for a Santa Fe organization. Within no time at all, the sport had real traction in a town with skyrocketing demand.

“It’s grown from this little group of people that got together, and now it’s big enough that we’re making a difference,” Lawton said. “The problem in those early days is we didn’t really have anywhere to play. The private clubs had their own courts, but for the not-rich people — you know, the teachers, the policemen, the everyday people who can’t afford those country club memberships — they all kind of had to fight for their own space.”

The process of claiming their own public domain centered around Fort Marcy. It began with groups of people occupying space for a few hours on the tennis courts, which led to negotiations with the city about painting lines on the existing surfaces, then formal requests to the city to transform those courts into permanent pickleball spots.

Players were able to find enough spots to make things work. They took up space inside gyms and on outdoor courts here and there.

That’s right around the time the pandemic arrived, eliminating indoor access and pushing the growing number of pickleballers into the same confined outdoor space as tennis enthusiasts.

Like snowboarders invading the slopes traditionally held by the two-plankers, it took a certain degree of cooperation to get both sports to coexist — often at the same time and place. Lawton said she’d seen an instance or two of territorial strife, but nothing that wasn’t immediately worked out.

"Just as long as everyone's having fun, that's all matters," Lawton said.

Oh, sh*t. There goes the planet.

This is so sad because the parks and rec was given money to repair the tennis courts at Herb Martinez where my son takes tennis lessons. Him and his coach are so afraid they are going to break an ankle it’s so bad. Why would they put a pickle ball court instead of fixing the court that need to be fixed. We are catering to the rich while the southside and our youth are ignored. There is more to Santa Fe than the Northside of side of town. Then we wonder why there our children are getting into drugs because our mayor and his staff don’t care about them. We offer nothing for our youth.

So basically one has to join El Gancho or The SF Swim and Tennis Club in order to play in SF now? The only public courts are on Carlos Rey and not in the best of shape. One use to be able to play on the courts near St. John's College and there was a court at Atalaya Elementary (not sure if it's still available?) The old (and now demolished) courts at SFHS were great, when they were in shape and the gate wasn't locked. Lame!

So Alto, Alta Vista, and the two on Avenida Cristobal Colon are all closed too? Holy cow, wait, no they aren't.

Live near ft Marcy. Don’t play either but it’s used much more by pickle ball.

Good morning Stan- you’re probably right, but it sure looks like there is enough room there to accommodate both Pickleball and tennis.

Don't complain! Come together as a community and discuss your needs with the appropriate city officials. You just might be surprised how willing they are to help! Perhaps ask them to resurface the tennis courts at Martinez Park on Camino Carlos Rey.

I think those are the frustrations that both Jennifer and Bruce are voicing. Just as other Santa Fe residents are.

We went to the Mayor with issues. He did nothing. No action was taken.

This is the reason for the frustration throughout the City.

Vote Webber Out of office!!

To say that the tennis courts were seldom used for tennis was incorrect.