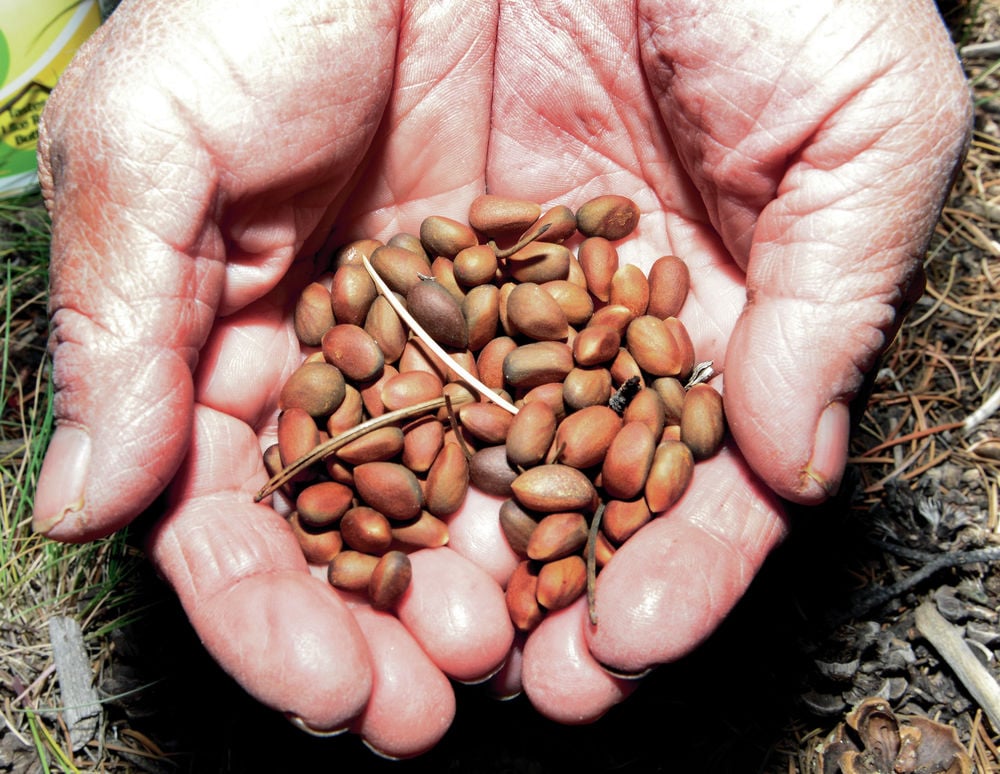 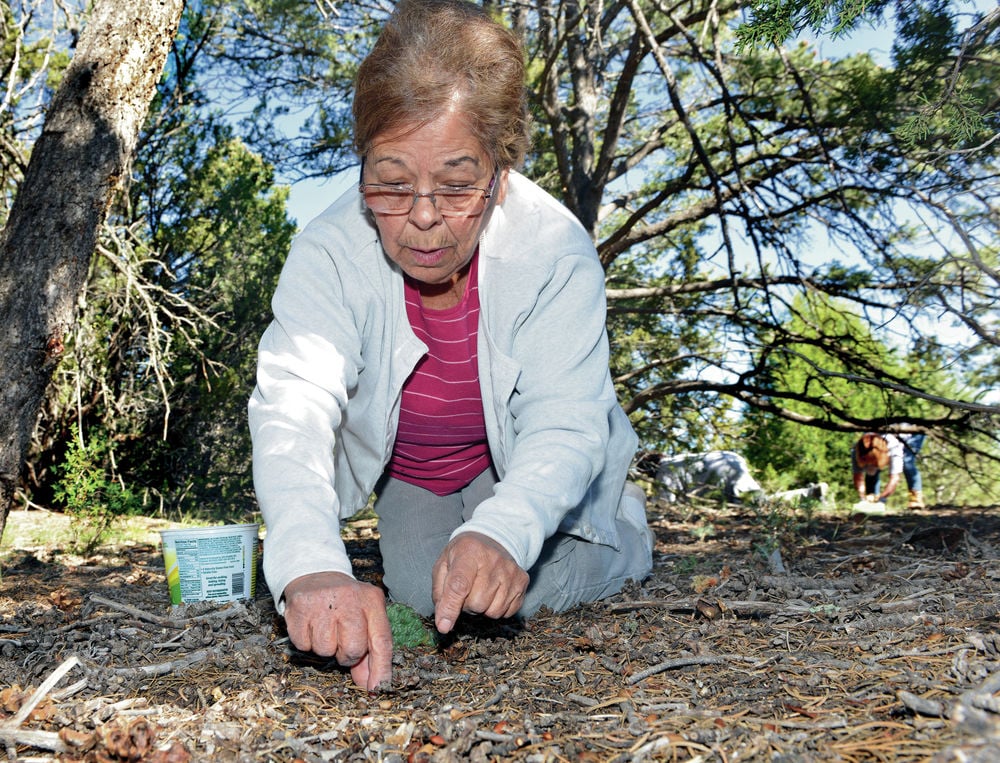 Joyce Sandoval of Santa Fe harvests piñon nuts Friday in the Pecos area. This year, seed-seekers will be pleased with a plentiful harvest, all thanks to El Niño, according to experts. Clyde Mueller/The New Mexican 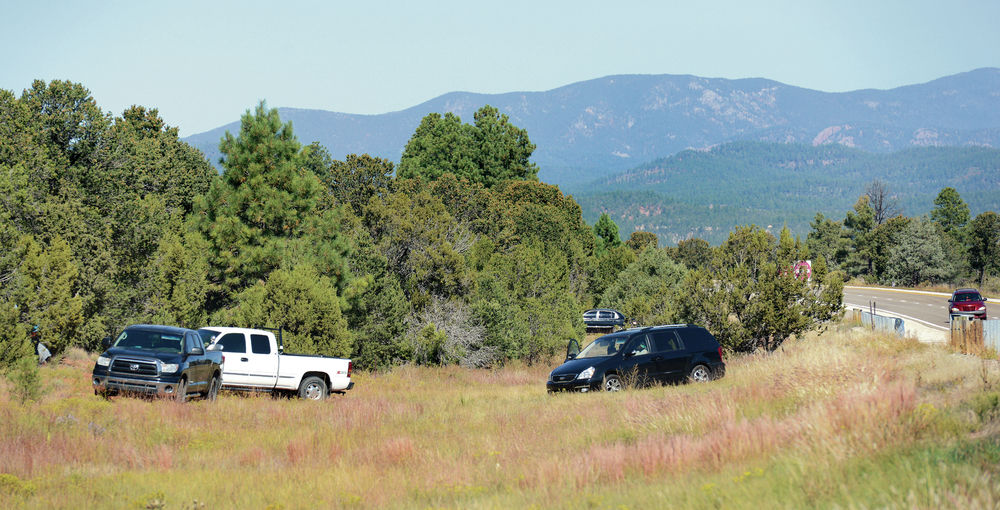 Joyce Sandoval of Santa Fe harvests piñon nuts Friday in the Pecos area. This year, seed-seekers will be pleased with a plentiful harvest, all thanks to El Niño, according to experts. Clyde Mueller/The New Mexican

PECOS, N.M. — Mark Quintana gestures into the shady thicket of pine trees. His sons are in there somewhere, he says, along with a few of his cousins. Theirs is a familiar fall scene in Northern New Mexico: Trucks parked on the roadside, tin cups and small buckets scattered beneath pine-needle boughs thick with brown cones. They’ve come for piñon.

Quintana, an energetic man who’s a member of San Felipe Pueblo, displays a handful of chocolate-brown seeds, part of his morning haul. He’s hardly satisfied. “I’m gonna shoot till 5 o’clock,” he says, “and see how much I get.”

Kneeling beneath the pine trees on a cool autumn morning takes Quintana back in time. He has lost both of his parents, with whom he first came out to collect piñon when he was 10 years old. He’s making the effort, he said, to pass on the tradition.

That hasn’t been difficult this year. “You don’t have to look for them,” he said, gesturing again toward the bank of trees. “They’re all just right there.”

As the air cools and daylight hours shorten, the cones of piñon pine begin to open. In the right year, after a few frosty nights, the seeds within will loosen and fall to the ground, ready to be scooped up for salting and roasting.

Anecdotal impressions are as reliable as anything else when it comes to piñon trends. The New Mexico Department of Agriculture does not keep records on the piñon harvest.

But piñon has never been a commodity to be measured, sold and tracked, a number in a spreadsheet. For many in New Mexico, as it was for their ancestors, piñon is essential to the fabric of the land, to a sense of time, place and home.

David Cuneo, owner of Albuquerque-based New Mexico Piñon Nut Co., said dry conditions have a lot to do with yearslong piñon gaps. Drought signals to the tree that energy would be better directed toward subsistence and away from reproduction, he said. And the crop can be even more inconsistent depending on geography and where rain has fallen. A picker might find plentiful cones in one pocket of trees, while drawing nothing but empties, or baños, in another around the corner.

But Cuneo, who has been inspecting cones across the region in the past few weeks, said optimism is broadly warranted this fall. He rates this as the best piñon crop since 2005.

“Everyone will be happy. Better size, less empties. … I’ve been busting open cones. I know the percentages,” he said.

Cuneo identifies a few nearby hot spots where he said people would strike piñon gold: Pecos, Edgewood and north of Española and Ojo Caliente. Those willing to go a bit farther afield, he said, would find success north of Cuba, a village in Sandoval County.

Julie Anne Overton, a spokeswoman for the Santa Fe National Forest, said it appears to be the second consecutive year with a good piñon crop.

“You can see the trees, and they’re full of cones,” she said. “So far the traffic has been moderate. But I think once the word spreads, we’ll see more people.”

The forest service asks potential harvesters to respect boundaries with private land. “We’ve seen people cut fences, that sort of thing” in the past, she said.

Penelope Gregory’s private land is fit to burst with nut-bearing cones. Her ranch, within the Rio Grande del Norte National Monument, not far from the New Mexico-Colorado border, lies in its own micro climate, she said. Rainfall is plentiful, all but assuring her a regular crop of piñon.

The market has favorable weather conditions to thank, according to data from the National Weather Service. The region is coming out of a strong El Niño and experienced a wet December, said Royce Fontenot, a senior service hydrologist in Albuquerque. Data show a rainy August helped even out Northern New Mexico’s overall summer precipitation total to just about normal.

Cuneo, the piñon nut retailer, said those wet conditions can make the difference between a crop that comes to fruition and one loaded with baños. Last year’s crop was decent, too, he said. “Blame it on El Niño,” he said.

In Pecos, on National Park Service land southeast of town, Chief Ranger Scott Martin said his focus during piñon season is preservation, as well as the safety of roadside pickers.

Visitors may collect up to one quart per day, Martin said, and up to 25 pounds per season, in areas not fenced off by the park. He’s keeping a close eye, but there haven’t been any egregious violations this fall.

“It’s a family thing,” he said. “Everybody comes out, from grandma to the smallest kids. They’ll set up a picnic and spend the day.”

Theresa Gonzales Connaughton has lived up the hill from Old Las Vegas Highway for 38 years in a home surrounded by piñon and juniper. Last year, she said, one of her neighbors posted no-trespassing signs in the area to slow an influx of nut-seekers.

When Connaughton spots these visitors, she said, she goes to introduce herself and asks them to keep some distance from her house, but otherwise lets them be. In a good year, there’s plenty to go around, she said.

Picking the piñon is a tradition Connaughton’s mother passed down to her, and her mother’s mother before that.

Her two young grandchildren are “really into it,” she said. If her cones show promise in a week or two, she said, they’ll come up and collect together.

The tradition, Connaughton said, is part of a “subsistence, sustainable agriculture” people in this part of the country have used to survive for centuries. “When Mother Nature gives you a crop like piñon, how could you not use it?”

“For me, it’s a historical and cultural experience,” she added. “It’s not so much about the piñon, to tell you the truth. My mother used to say, ‘This is an awful lot of work,’ and yes, it is, but … I think it’s important that people understand how to live a sustainable life.”

What: 120 acres of wild organic-certified piñon north of Tres Piedras.

More info: To visit, call Penelope Gregory at 575-770-5206 or penelopegregory@hotmail.com.