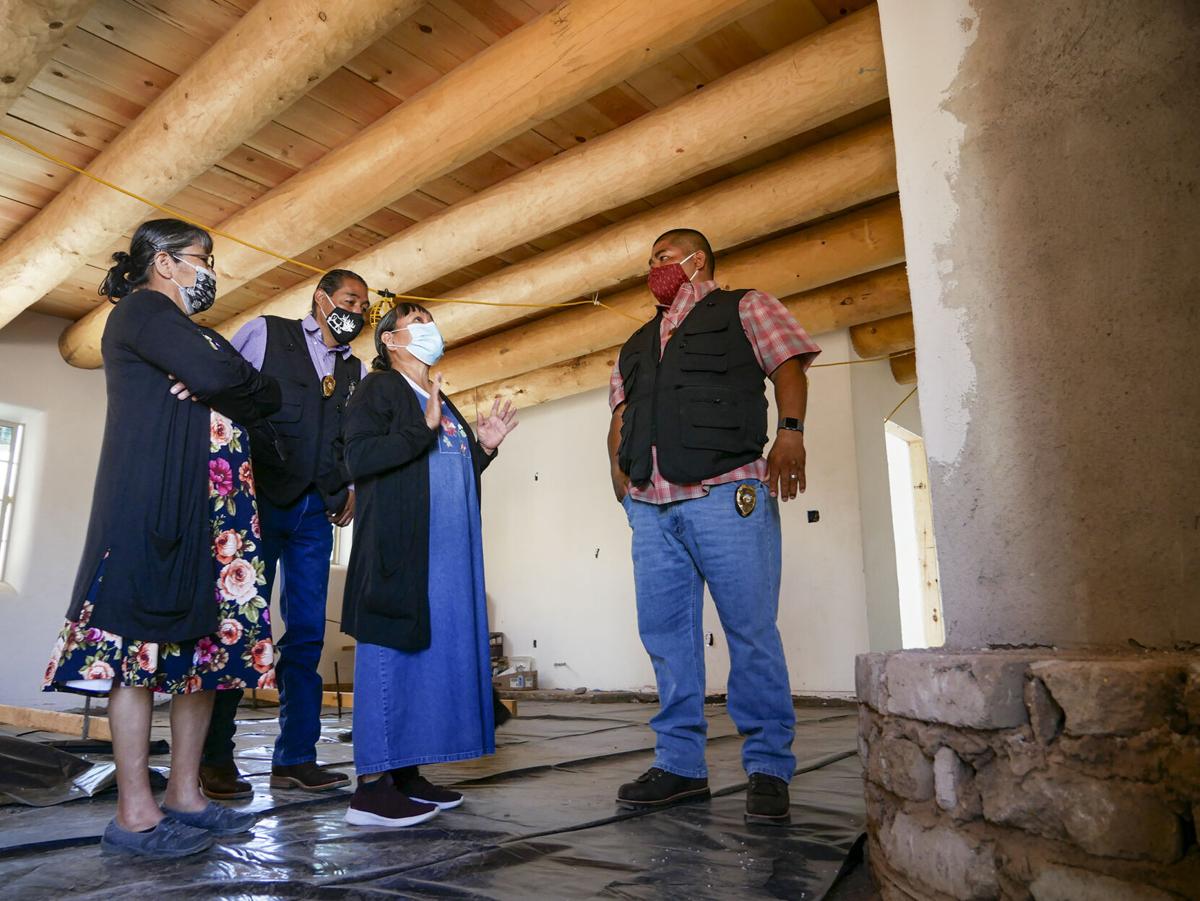 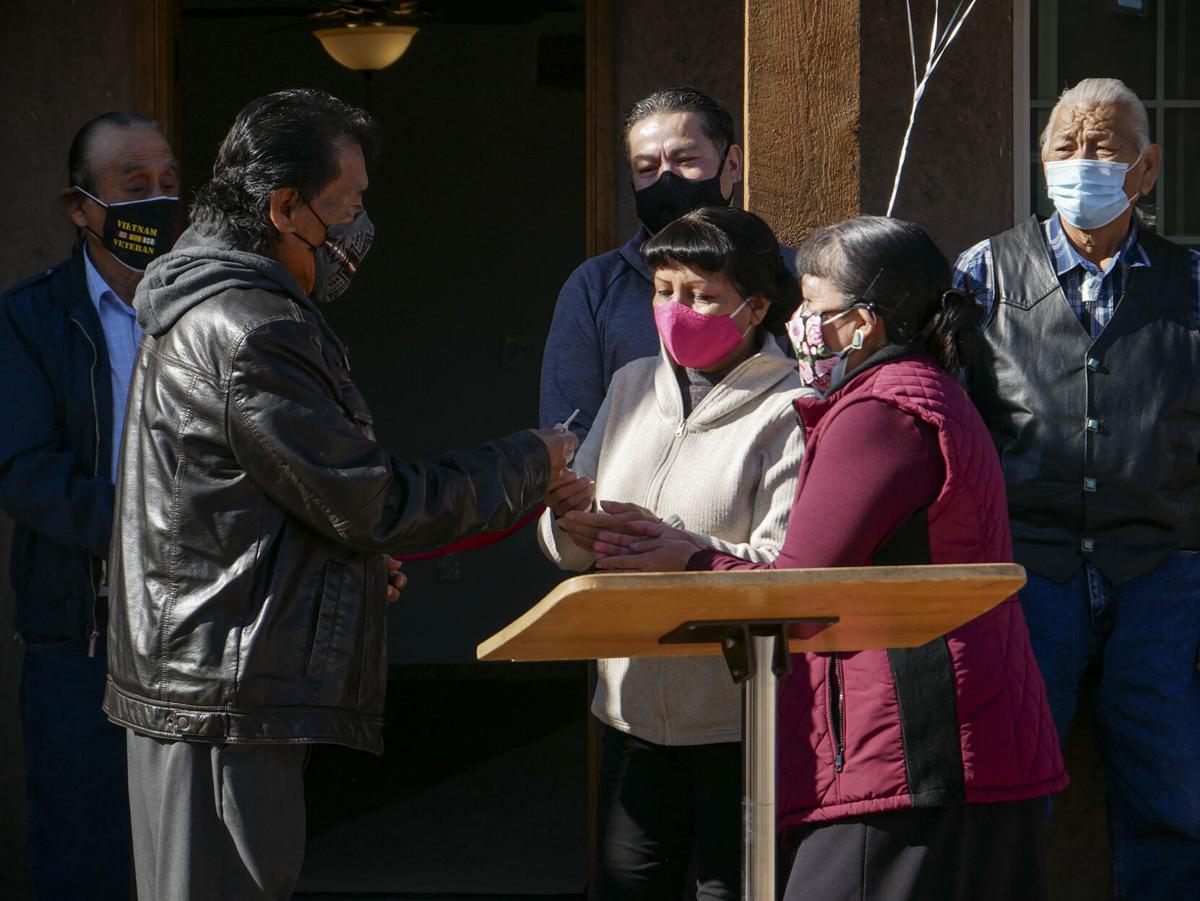 Santo Domingo Pueblo Gov. Sidelio Tenorio hands the key of a rebuilt adobe home to Diane Garcia on Tuesday morning during an event to celebrate an initiative to restore and rebuild traditional adobe homes that were severely damaged by hail and floods. 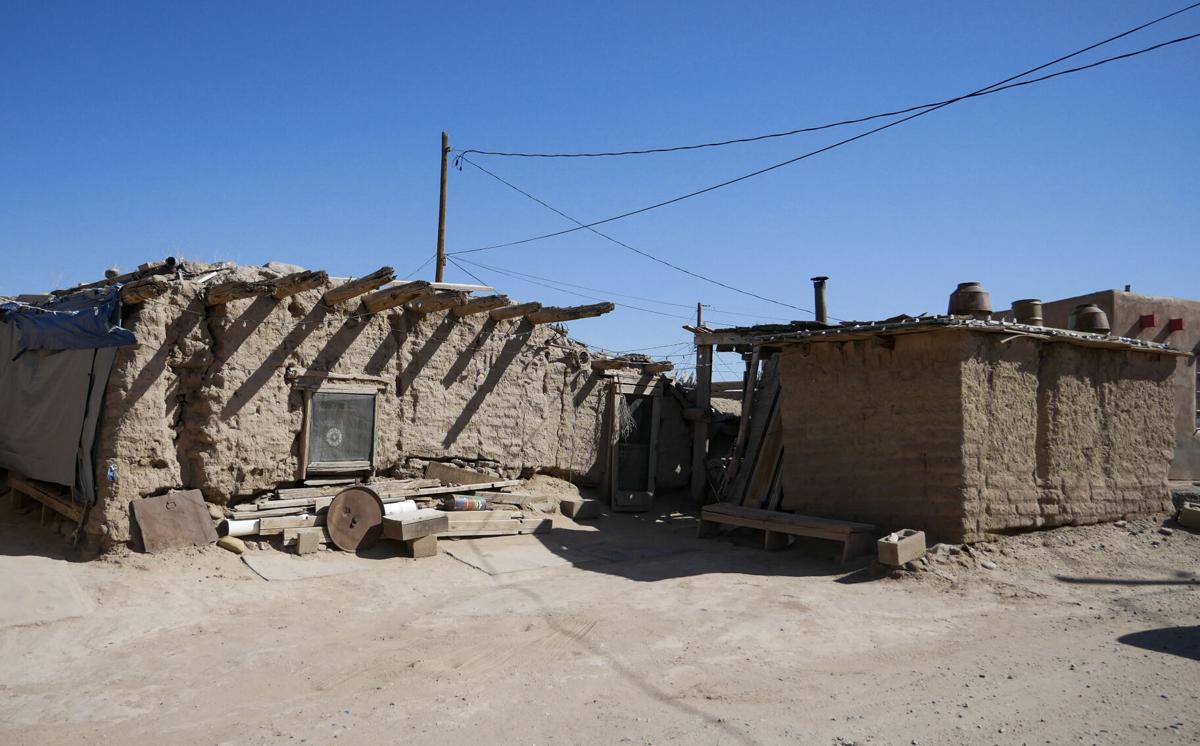 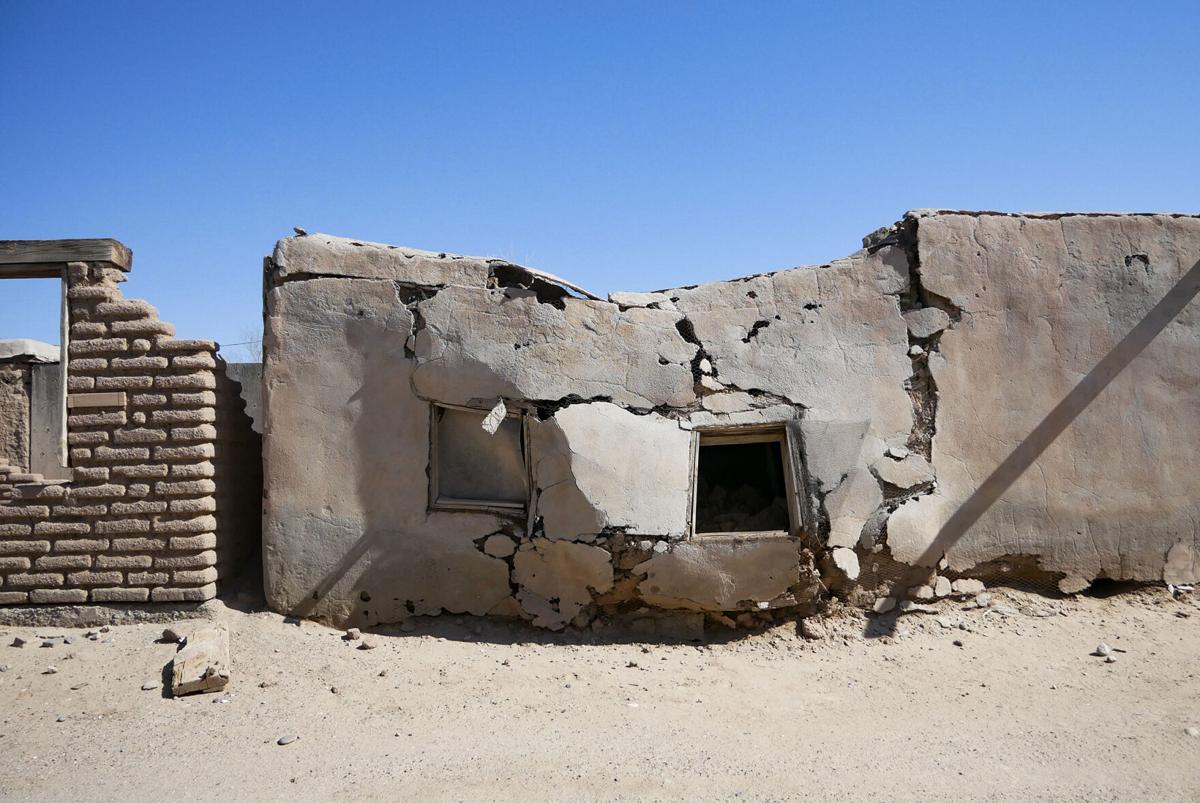 Damaged by storms, the wall of a traditional adobe home is caving in at Santo Domingo Pueblo. 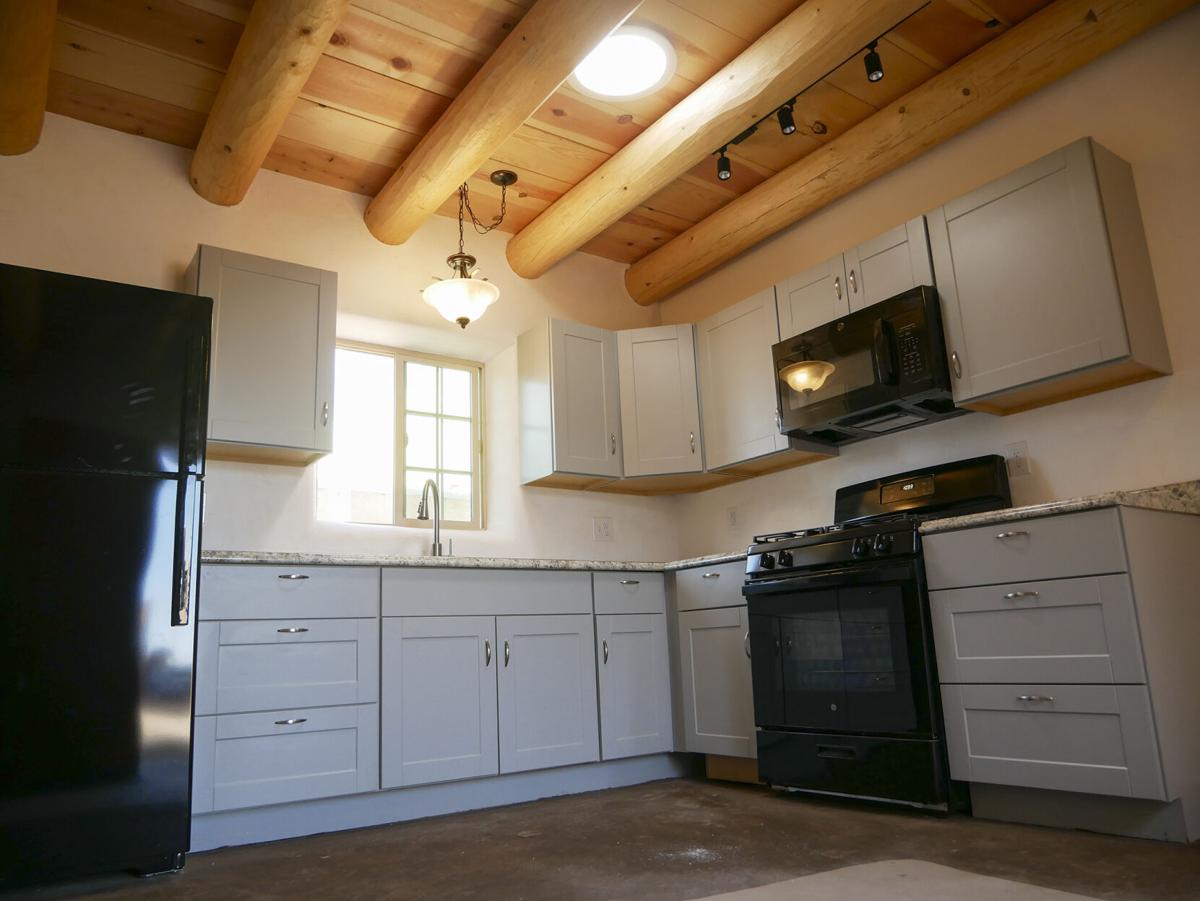 The new kitchen inside the rebuilt adobe home of Diane Garcia. The home had been badly damaged by hail and floods. 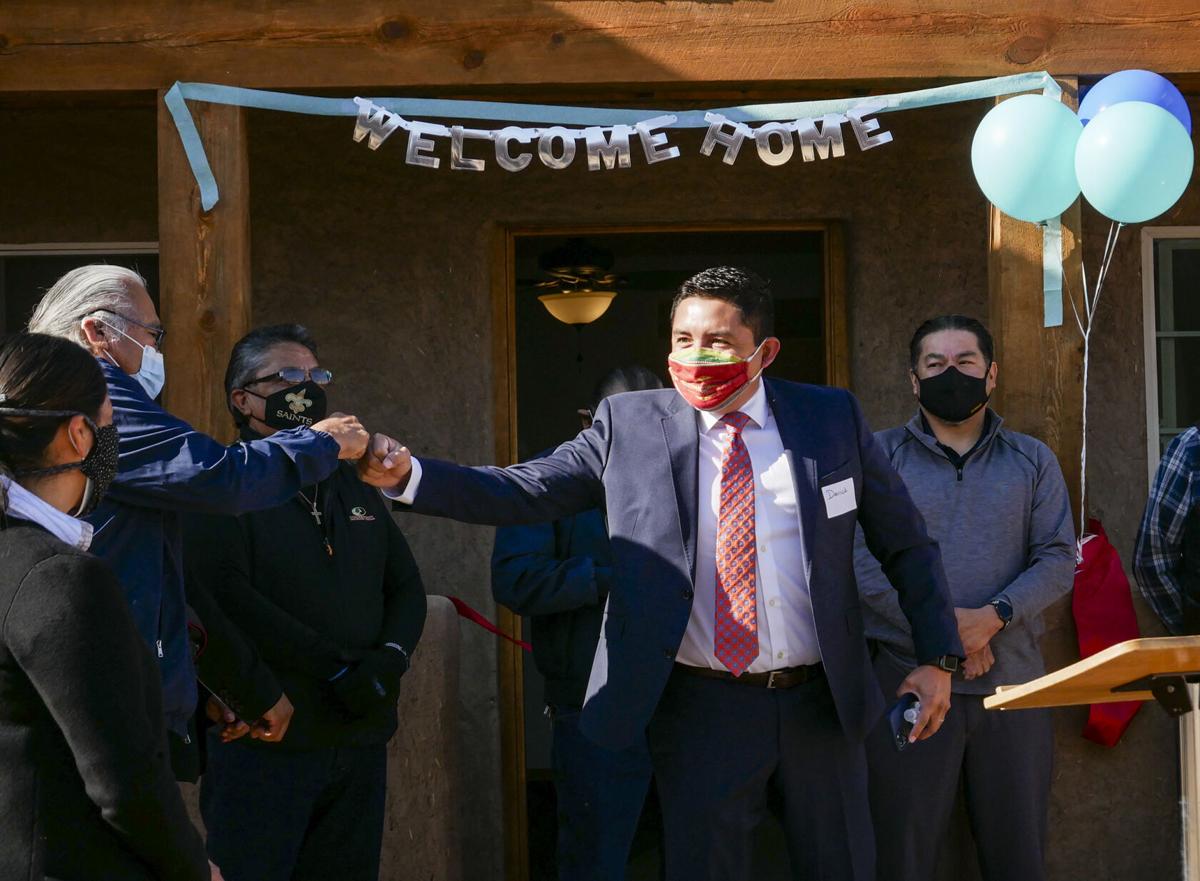 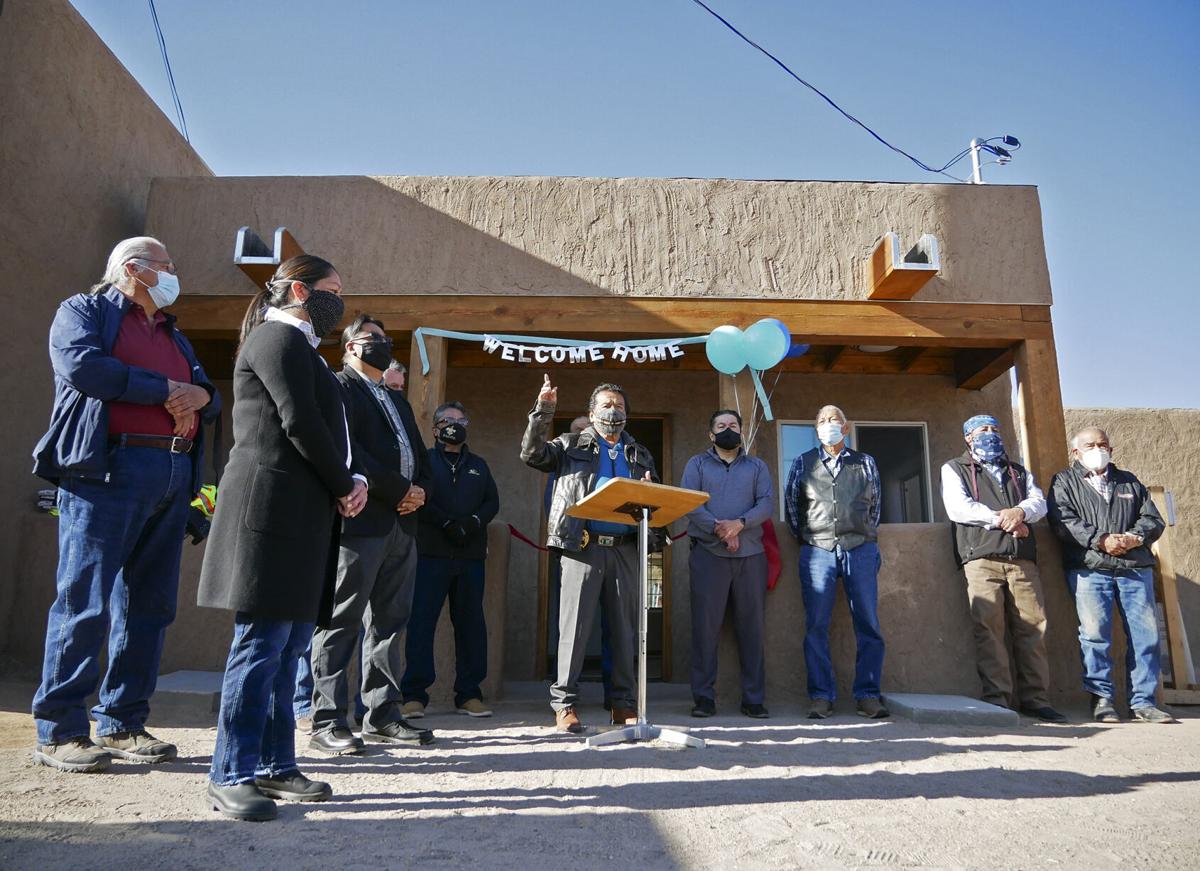 Surrounded by tribal leaders, Santo Domingo Pueblo Gov. Sidelio Tenorio speaks Tuesday in front of the newly rebuilt adobe home of Diane Garcia. The renovations to the home were the first completed in an initiative to rebuild or restore more than 150 traditional adobe buildings. 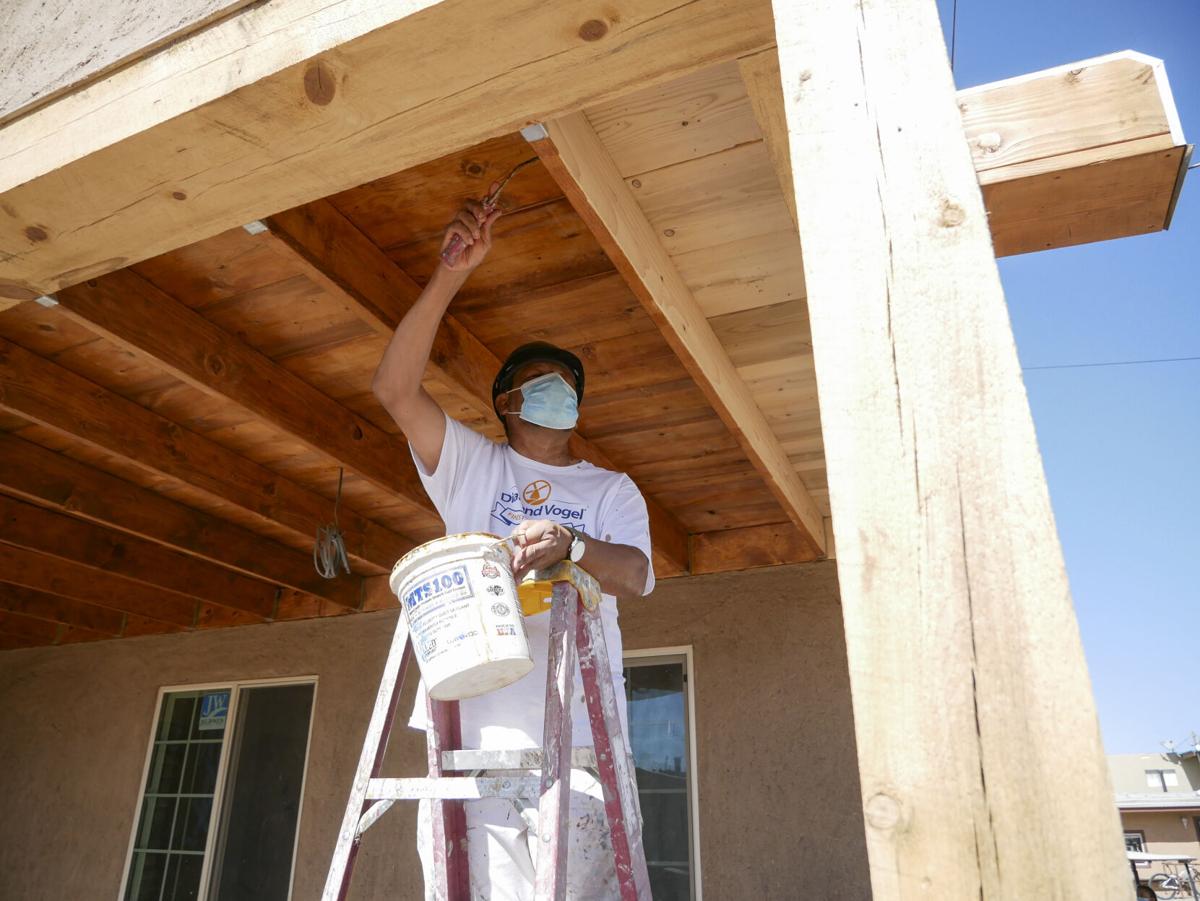 Raymundo Luevano applies a varnish and stain Tuesday beneath an overhang of a restored adobe home at Santo Domingo Pueblo.

The new kitchen inside the rebuilt adobe home of Diane Garcia. The home had been badly damaged by hail and floods.

Roofs were perforated “like a machine gun,” with some vigas broken and windows shattered.

The floods came three years later — a week’s worth of rain, capped with a 24-hour downpour. In the ensuing years, mold issues arrived.

Diane Garcia and her daughter, Patricia, have lived amid the damage to their home since the 2010 hailstorm and 2013 deluge. They aren't alone: Many other residents in the small pueblo southwest of Santa Fe continue to live in storm-damaged adobe homes.

But on a sunny Tuesday morning, the Garcias welcomed neighbors, government officials and media into their rebuilt adobe, the first completed project of 160 damaged homes in the historic village the pueblo intends to repair and rebuild as funding becomes available.

“We love it,” Patricia Garcia said. “We’re very thankful for the help we had.”

Since 2017, Santo Domingo Pueblo has spent $300,000 in tribal funds to repair about 30 roofs. The Federal Emergency Management Agency kicked in $1.4 million, but there were so many restrictions that only $10,000 has been used so far, said Phoebe Suina, a San Felipe and Cochiti Pueblo member and owner of High Water Mark, a Bernalillo environmental consulting company and project manager for Santo Domingo’s housing project.

But a turning point came in late 2019 when Gov. Michelle Lujan Grisham invited Santo Domingo tribal leaders to discuss their plight. Just before the coronavirus pandemic hit, Lujan Grisham sent her Cabinet secretaries to the dirt roads and adobe homes of the pueblo's historic village, where homes are typically more than 100 years old and some date to the 1600s and 1700s.

“Gov. [Lujan] Grisham invited us,” former Santo Domingo Gov. Thomas Moquino recalled. “We sat down with our wants. She opened her ears, listened to us.”

“The leadership here is to be commended for its persistence,” New Mexico Indian Affairs Department Secretary Lynn Trujillo said of the tribal council's persistence in seeking state and federal aid. “Out of something really bad comes something really good. Out of the pandemic came opportunity.”

The state committed $2 million in state funding and $1.4 million in federal CARES Act money to help restore the historic village after setting aside $28 million in CARES funds for New Mexico’s tribal communities. Santo Domingo Pueblo has spent or committed the full amount to restoring the first eight storm-damaged homes by summer, Suina said.

Diane and Patricia Garcia intend to move into their new adobe home by mid-April. Doing so will end nearly a decade of living with rain and roof damage, which was worst in the kitchen.

“On rainy days, it was the hardest,” said Patricia Garcia. “It seemed like it rained all the time. It’s just as hard when it snowed and the snow melted.”

“It was important to us that, if possible, a Native-owned company was hired to oversee this project,” Sanchez said. “We have the capability now to start our own company.”

The tribe estimates the full restoration of all 160 storm-damaged homes could cost $40 million. The Garcia home cost about $300,000, Sanchez said.

Thankful that a new day had dawned, leaders at Santo Domingo Pueblo, also known by its traditional name, Kewa Pueblo, recounted Tuesday the decadelong journey of weather havoc and state and federal governments' seeming indifference to their plight.

“We looked for help,” council member Ramos Pacheco said. “We are not a gaming tribe. They ignored us. We’ve been asking for help since before [former Gov. Susana] Martinez.”

“The citizens of Kewa Pueblo are citizens of the state,” she said. “We should be helping them as we help all New Mexicans.”

Jennifer Pruett, deputy secretary of the state Environment Department, was among the Cabinet members who visited seven of the pueblo’s damaged homes a year ago. She was back for the open house at the Garcia home Tuesday.

“It was horrible what I saw,” Pruett said of the damage she saw during her first visit to the pueblo. “There are also improvements needed with water and wastewater infrastructure.”

Sammy Garcia, another former Santo Domingo governor, said he still has vivid memories of the 2010 hailstorm.

“Terrible. You couldn’t even see through the hail,” Garcia said. “People were crying. There were holes in the roofs, windows were shattered. ‘What’s happening to us?’ ”

But that was then. On Tuesday, all anyone could talk about a sunny day. A new day.

Covid relief? How? Why? What?

The phrase identifying the pueblo by its native name is buried deep into the story: "...leaders at Santo Domingo Pueblo, also known by its traditional name, Kewa Pueblo..." Why did'nt your identify them early on, as would be the pueblo's preference, I believe, and refer to them throughout the article by the native name. Did you ask the Kewa Pueblo leaders what is considered correct in 2021???