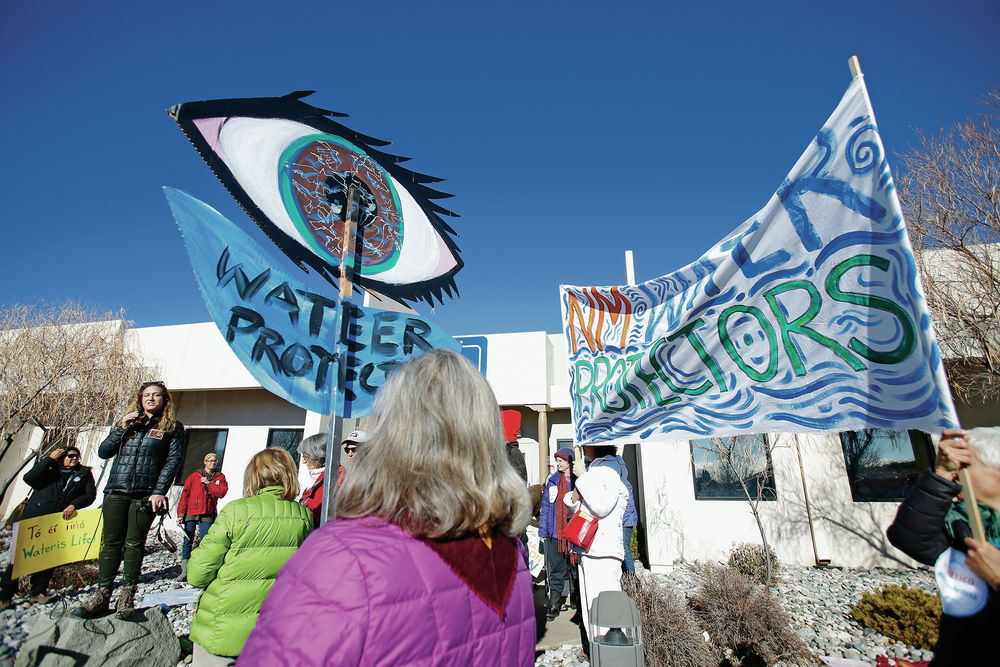 Rebecca Sobel of WildEarth Guardians addresses a crowd of protesters Tuesady outside the offices of the Bureau of Land Management. The protesters object to an oil and gas lease sale in Chaco Canyon. Luis Sánchez Saturno/The New Mexican 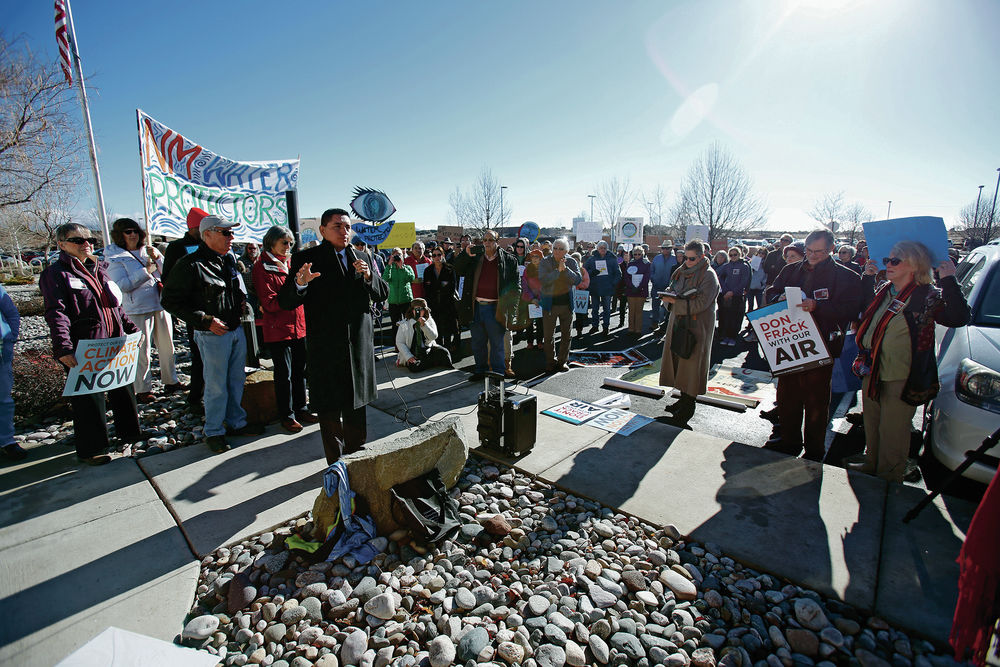 Rep. Derrick J. Lente, D-Sandia Pueblo, addresses a crowd of protesters Tuesday outside the offices of the Bureau of Land Management. The protesters were objecting to an oil and gas lease sale in Chaco Canyon. Luis Sánchez Saturno/The New Mexican

Rebecca Sobel of WildEarth Guardians addresses a crowd of protesters Tuesady outside the offices of the Bureau of Land Management. The protesters object to an oil and gas lease sale in Chaco Canyon. Luis Sánchez Saturno/The New Mexican

Rep. Derrick J. Lente, D-Sandia Pueblo, addresses a crowd of protesters Tuesday outside the offices of the Bureau of Land Management. The protesters were objecting to an oil and gas lease sale in Chaco Canyon. Luis Sánchez Saturno/The New Mexican

The U.S. Bureau of Land Management is ignoring the pleas of Navajos and others in its planned lease of 843 acres near Chaco Canyon National Historic Park in northwest New Mexico for oil and gas drilling, protesters said Tuesday during a demonstration by more than 100 people at BLM’s office in Santa Fe.

“We don’t sell our mother earth … our water … our air,” Etta Arviso, a member of the board of directors of the Diné Medicine Men’s Association, said at the protest.

Prior to the demonstration, elders from the Navajo Nation met with federal officials, including BLM State Director Amy Lueders, asking that the agency cancel the lease sale, which is scheduled for Jan. 25.

BLM officials said after the meeting they were considering the input of tribal leaders and protesters, as well as more than 2,000 letters and other public comments submitted to the agency. BLM has postponed the lease sale three previous times because of opposition.

Chaco Canyon was the site of a thriving puebloan culture a thousand years ago, and the area has significant spiritual and cultural importance for tribal communities in New Mexico.

BLM is planning to lease four parcels for oil and gas drilling. The closest parcel to the national historic park is 19 miles away, according to the agency.

Tribal members and environmental advocates say the federal government has failed to fully assess the impacts of fracking for oil and gas in the area. Fracking is a drilling technique using pressurized liquid to fracture rock.

“They don’t see us,” said Kendra Pinto, who lives on one of the parcels proposed for leasing. “They don’t see that we have to breathe in these gases or deal with these safety issues that take place.”

Pinto was referring in part to a July 11 incident on the Navajo Nation when an explosion of fracking storage tanks sparked a fire that burned for five days and forced 55 people to evacuate.

She said there are areas near her home where the air is choked constantly with the smell of gas.

Fracking has been linked to environmental problems, including minor earthquakes, contaminated groundwater and the production of methane, a potent greenhouse gas.

BLM says the drilling is not expected to have a significant environmental impact.

Delays in the drilling leases are costing the government royalties because operators on nearby state and private land are draining oil and gas from the BLM parcels, the agency says.

The BLM says the parcels have been sufficiently assessed since they were first proposed for extraction in 2012 and that the drilling is permitted under a 2003 resource management plan for the area. BLM is considering an amendment to the plan that could lead to a ban on oil and gas drilling in the region because of environmental and cultural damage.

The comment period for the amendment is open and two community meetings will be held by BLM and the U.S. Bureau of Indians Affairs in Farmington and Shiprock in early February. The amendment isn’t expected to be in place until 2018.

After protesting at the BLM office, demonstrators went to the state Capitol, where they handed out small bottles of brown oil.

“If you really want to help the relatives out at Chaco, go there and pray,” Anna Rondon, an environmental activist from the Navajo Nation, said. “Everything we do — every effort we do — starts with prayer.”

Rep. Derrick Lente, D-Sandia Pueblo, plans to introduce a resolution calling for a temporary moratorium on oil and gas activities in the Chaco region until the amendment to the area’s management plan is in place.

The memorial states that 91 percent of the public land in the region has been leased for oil and gas drilling, with 400 new fracking wells popping up since 2013.