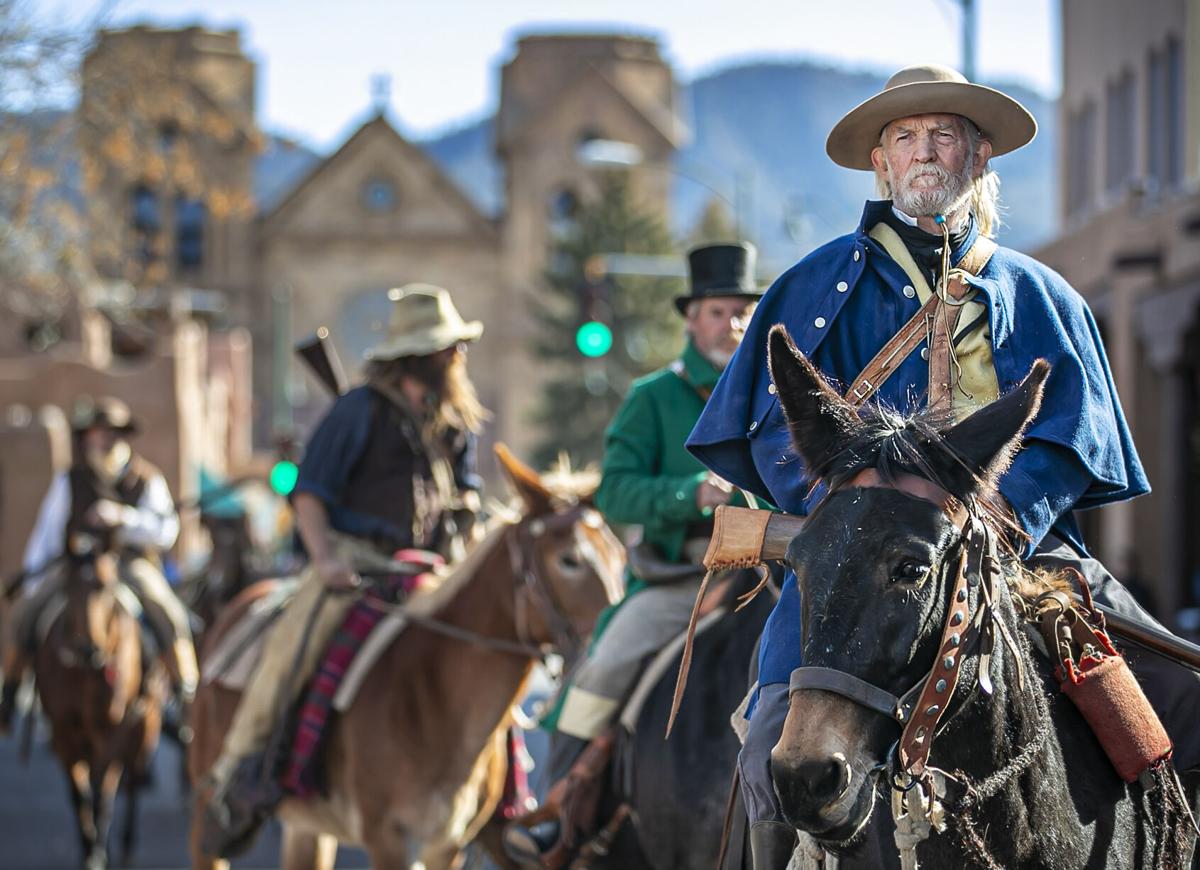 Lloyd Britton, right, leads a group of reenactors dressed as 19th century-attired businessmen into the Santa Fe Plaza on Sunday to the spot where American commerce was officially opened with the newly independent Mexico 200 years ago. The commemoration included a short vignette of that first meeting which led to the opening of trade between the U.S. and Mexico. 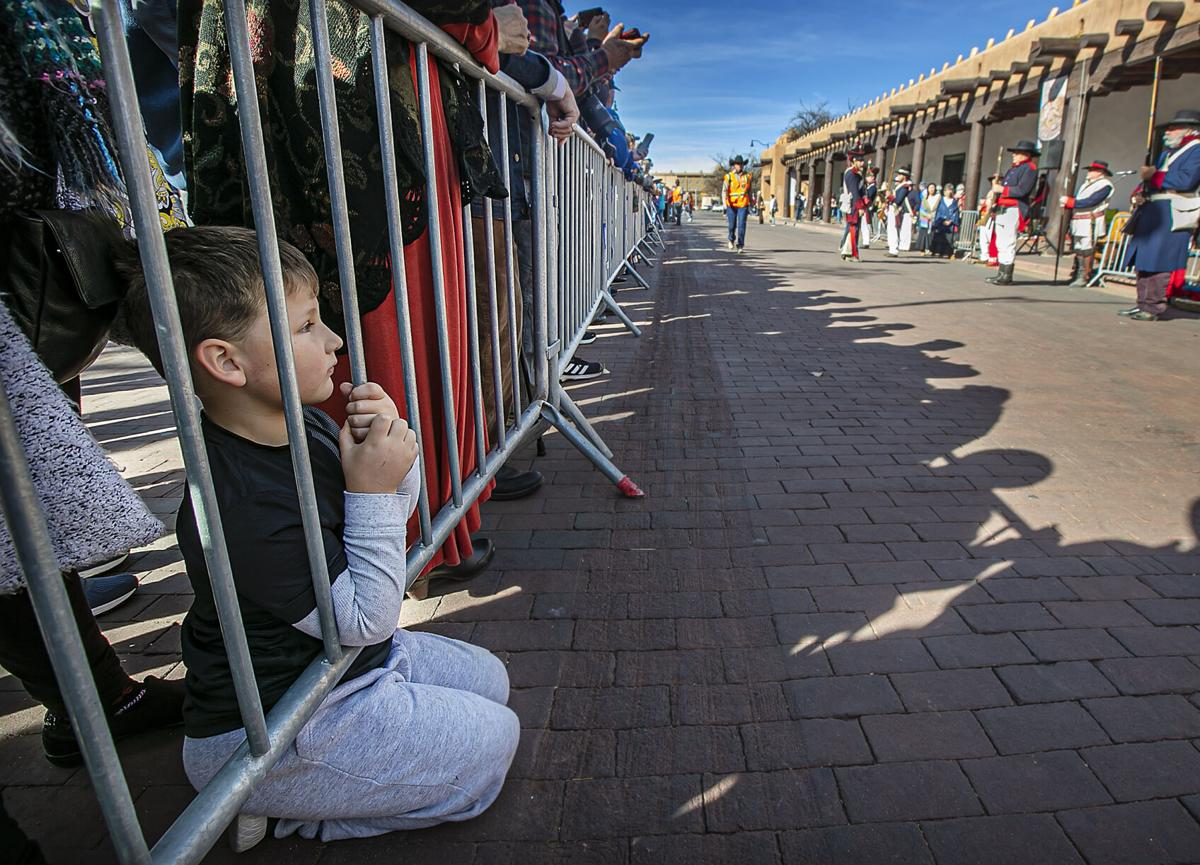 ABOVE: Cole Pitel, 5, watches Sunday as reenactors dressed as soldiers of the Presidio escort a mounted group of reenactors into the Santa Fe Plaza. TOP: Lloyd Britton, right, leads a group of reenactors dressed as 19th century-attired businessmen into the Plaza to the spot where American commerce was officially opened with the newly independent Mexico 200 years ago. The commemoration included a short vignette of that first meeting, which led to the opening of trade between the U.S. and Mexico. 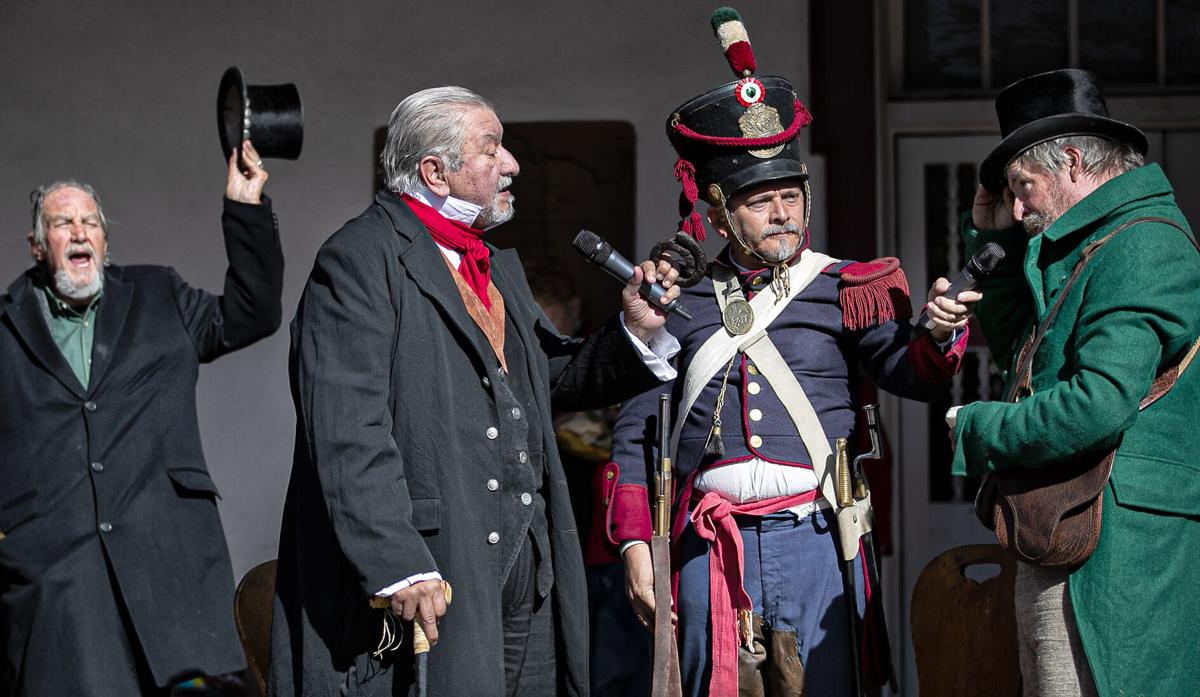 Lloyd Britton, right, leads a group of reenactors dressed as 19th century-attired businessmen into the Santa Fe Plaza on Sunday to the spot where American commerce was officially opened with the newly independent Mexico 200 years ago. The commemoration included a short vignette of that first meeting which led to the opening of trade between the U.S. and Mexico.

ABOVE: Cole Pitel, 5, watches Sunday as reenactors dressed as soldiers of the Presidio escort a mounted group of reenactors into the Santa Fe Plaza. TOP: Lloyd Britton, right, leads a group of reenactors dressed as 19th century-attired businessmen into the Plaza to the spot where American commerce was officially opened with the newly independent Mexico 200 years ago. The commemoration included a short vignette of that first meeting, which led to the opening of trade between the U.S. and Mexico.

Many of the people standing on the Plaza took out their cellphones to do something their antecedents could not do 200 years ago.

Or, at least, record a re-creation of history, as modern-day horsemen played the role of the 19th century trader William Becknell and compatriots and rode into the Plaza on Sunday morning to mark a major historical event that, some say, redefined not only New Mexico but much of the United States: the start of the Santa Fe Trail.

This past weekend marked the 200th anniversary of Becknell’s arrival in Santa Fe, where he was greeted by Gov. Facundo Melgares, the first Mexican governor of New Mexico, after that nation won its independence from Spain and in turn opened the doors to trade with other countries — a practice the Spanish government prohibited.

The opening of that trade trail from Missouri to New Mexico in 1821 left an indelible impression upon the Southwest, historians say. Besides building an economic bridge between a nation still celebrating a relatively new independence from Great Britain and a nation that won that independence just months before, the trail opened up the pathways to the West.

Within a few decades, the well-established wagon trail allowed the United States to pursue its policy of expansion called Manifest Destiny.

“It’s important [to commemorate] because the history of the this country is made on the Santa Fe Trail,” said Fran Levine, president of the Missouri Historical Society and former director of the Palace of the Governors in Santa Fe. She said that at a time when the country’s social studies standards are under scrutiny, teaching the trail from all points of view — “the appropriation of land, the decimation of the buffalo but also different cultures coming together” — is necessary to help people understand how the trail shaped the country for better and worse.

The relationships forged among those various cultures along the trail “welded the nation together — and apart,” she said.

But Sunday’s reenactment, which drew hundreds of spectators — some of whom seemed quite surprised to see men clad in 1820s garb and riding beautiful horses and sometimes-truculent mules — was all about celebrating the forging of new relationships. The event, presented in both Spanish and English, was punctuated with colorful costumes, period music and a spirit of hope and cooperation.

The roughly one-hour event showed an eager-to-befriend Becknell and an open-for-business Melgares sitting outside the Palace of the Governors to agree to work together. Joy Poole, co-founder of the Santa Fe Trail Association and one of the hosts of the event, said afterward the two men likely met inside the Palace of the Governors back in 1821. And no, she didn’t know what kind of weather Santa Fe experienced when the two met some 200 years ago. But given Becknell and others involved in the original event kept journals, she thinks it’s likely someone would have mentioned it was snowing if it had been snowing.

Historians tend to agree that Becknell, a failed Missouri businessman who was fending off a number of civil lawsuits regarding his finances, took a risk in obtaining a few hundred dollars in credit to buy enough goods to not only make a profit for himself but to prove trade with a foreign entity could be profitable for the country as a whole.

Becknell’s original journey, which started in September in Missouri, took about 50 days, Poole said in introducing the reenactment. She told the story of how Becknell and his tired band stumbled across a party of militia led by Pedro Ignacio Gallego, a local alcalde, in a pass just south of Las Vegas, on Nov. 13, 1821. Though both sides expressed a sense of friendship, no one in Gallego’s group spoke English, and no one in Becknell’s group spoke Spanish.

Eventually one or both parties managed to secure the services of someone who spoke French who could interpret for both sides, securing Becknell’s entrance into Santa Fe, which likely took place a few days later.

The rest, as historians like to say, is history. And that, said Rex Rideout, a musician who played two period songs on his banjo for the crowd, is the point of such reenactment presentations.

“With every generation, we lose memory,” he said. “So it’s important to save as many of those stories as possible.”

Over all, this celebration and commemoration is encouraging that maybe the city is moving on from the dark past of last year with all the violence and destruction. Good to not see gangs of thugs and protestors attacking the participants this time.

But where is my obelisk?

Was wondering why this reenactment is all right with Native Americans, when the folks from the east did so much more to decimate their culture than those here in the Southwest ever did.

Tell me what the anglos did.

Yes, a very significant and important historical event for NM, the beginning of the modern and advanced society we enjoy today. Not long after this event, NM was liberated by the Americans, and why we celebrate August 18th in our group.

Well, at least we know how to spell.

This is an ageist comment and should be removed.

Well, it's kind of true. People do appreciate history more as they age. The youngsters of today may ignore this reenactment but do their own twenty years from now.

As you get older you realize that things that you once thought were ancient history, are really not so far in the past.

I just want a Santa Fe that is more than a nursing home.

I bet you're wrong John. Celebrating and understanding history is something young people in their 20's might want to do.

See this is the perfect picture of Santa Fe. Old white people pretending it's the wild west. Meanwhile not a person in their 20's is in these pics or has anything to do here.

Oh for crying out loud, Mr. Gomez. It's recognition of history.

Stop the hatred of "old white people," it's just gonna burn you up inside.

I don't really hate them but I wish this town was more than a nursing home for them.

This is a racist comment, and should be removed.

Retirement is great. So sorry you still have to work,

Cool but why did you all have to swarm here and make things smell like bengay? I wish young people swarmed here like old people did. Santa Fe is only for old white people. It is so boring

Just as no one forced me to move here, no one is forcing you to stay.

My life is far from boring because I have great friends to share it with.