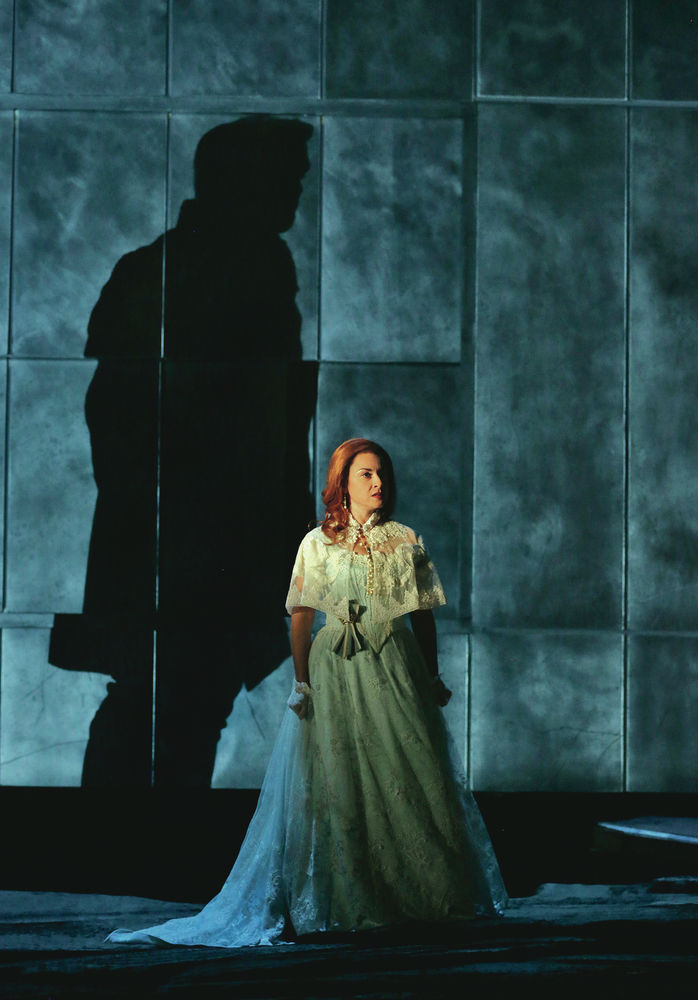 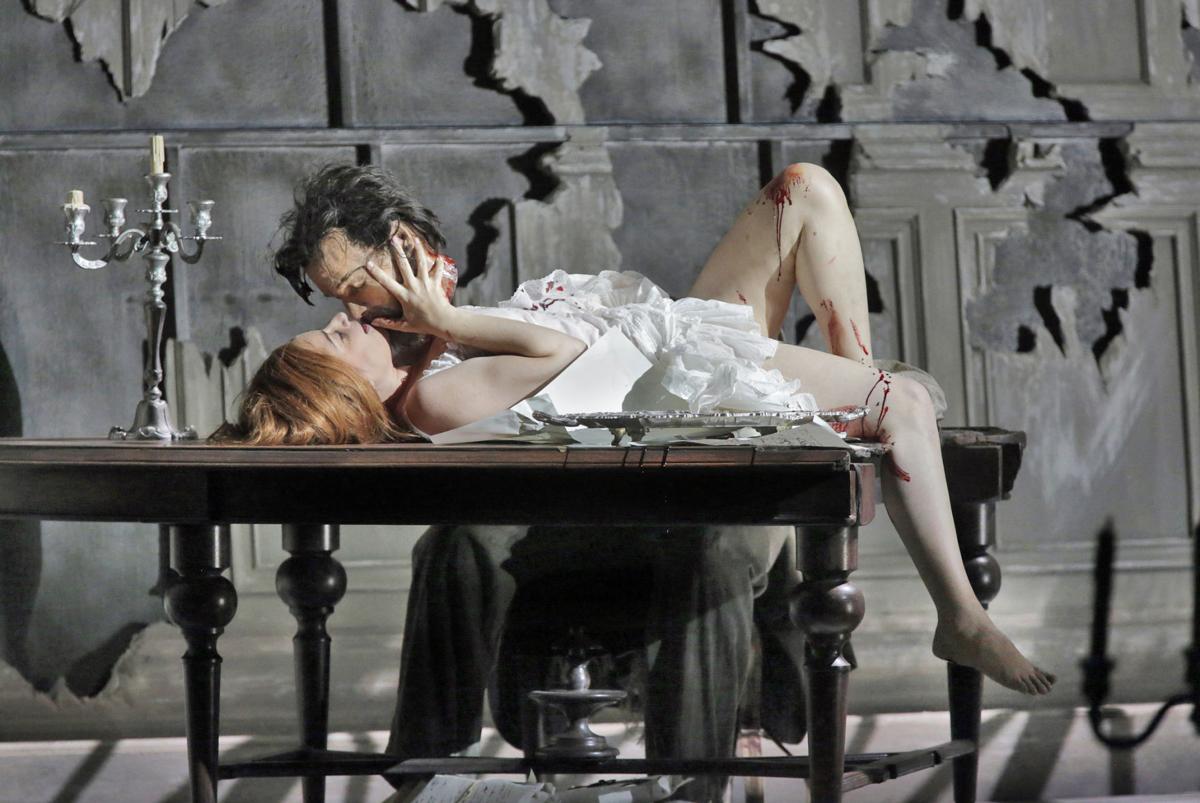 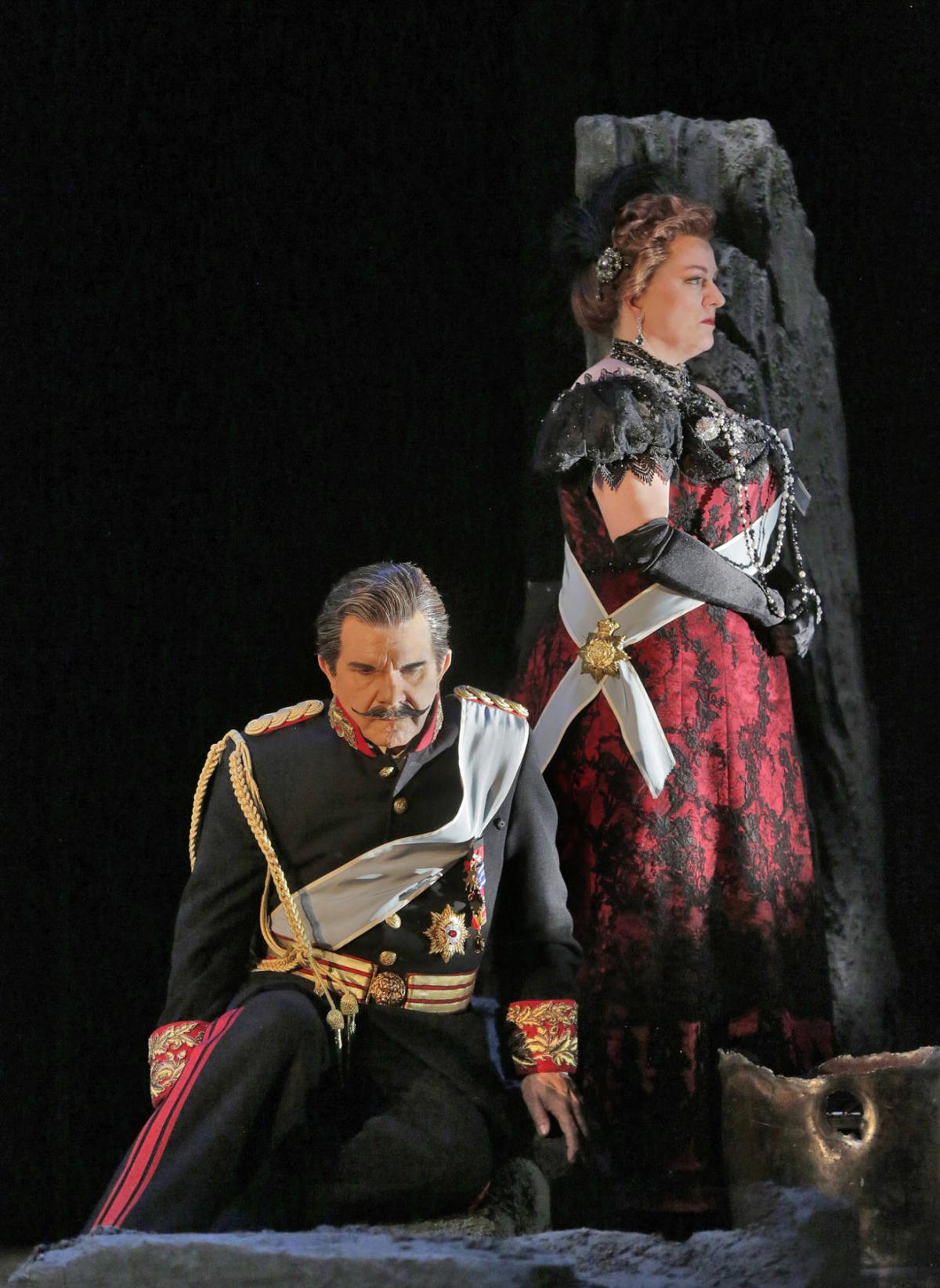 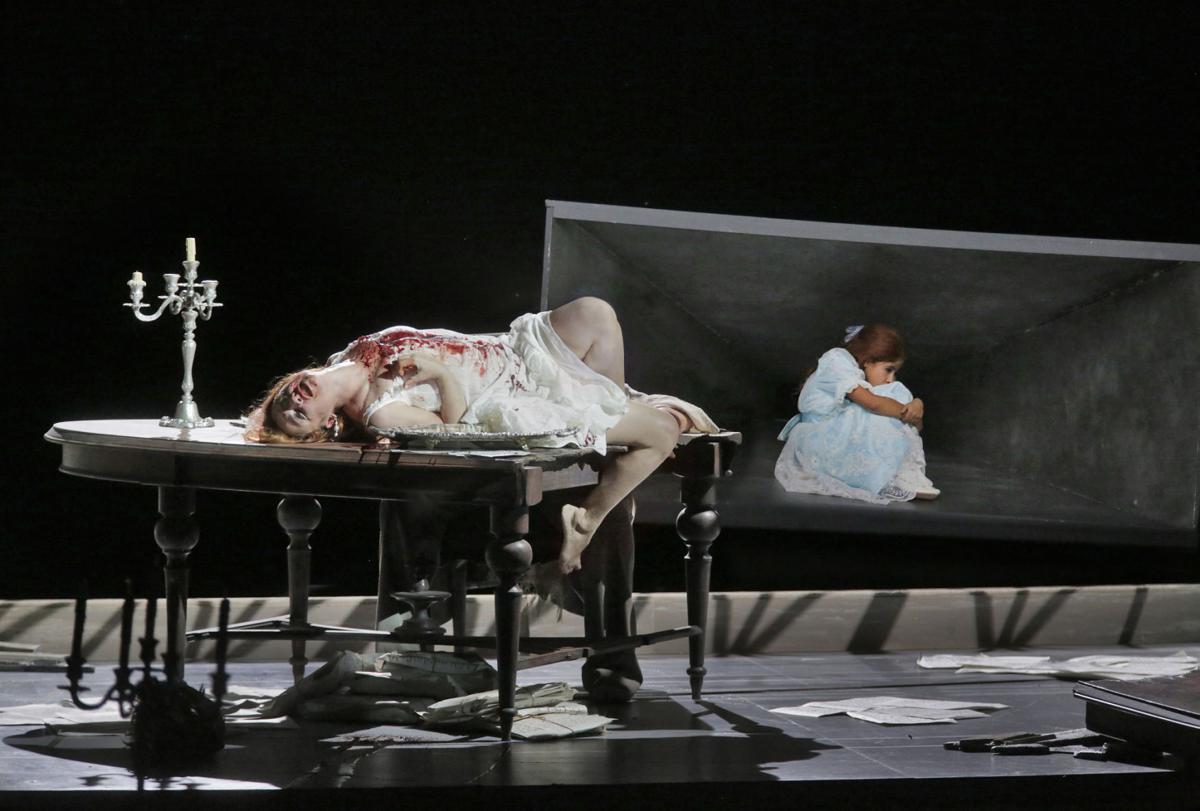 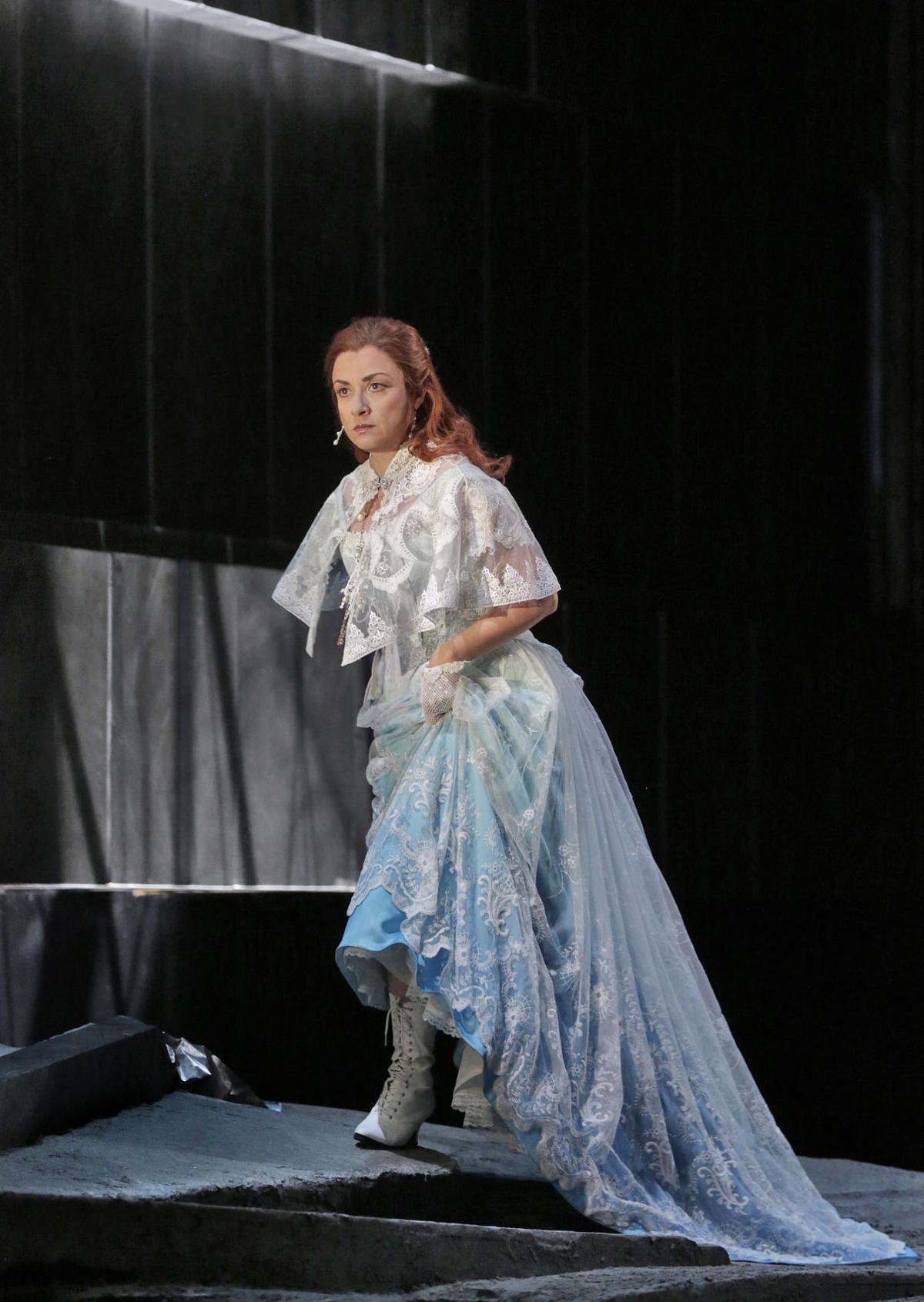 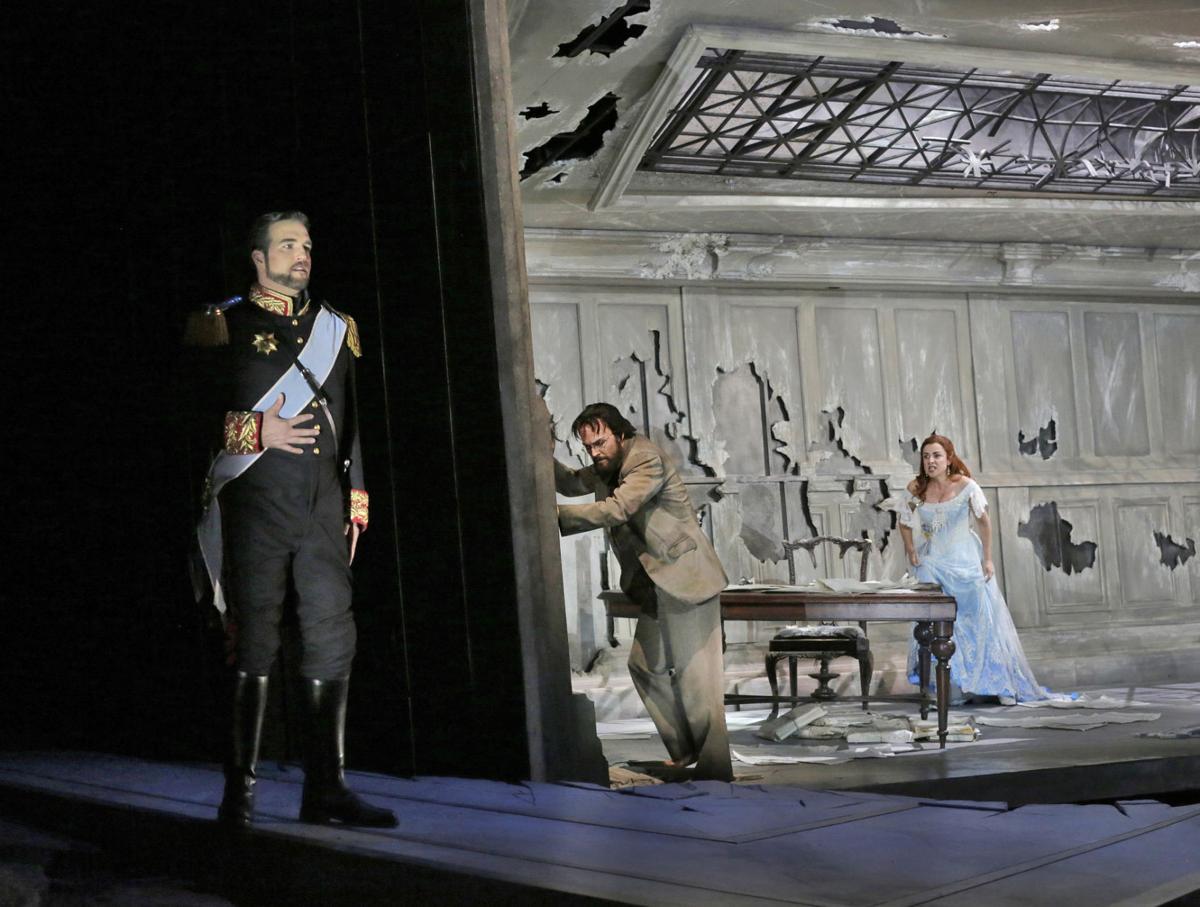 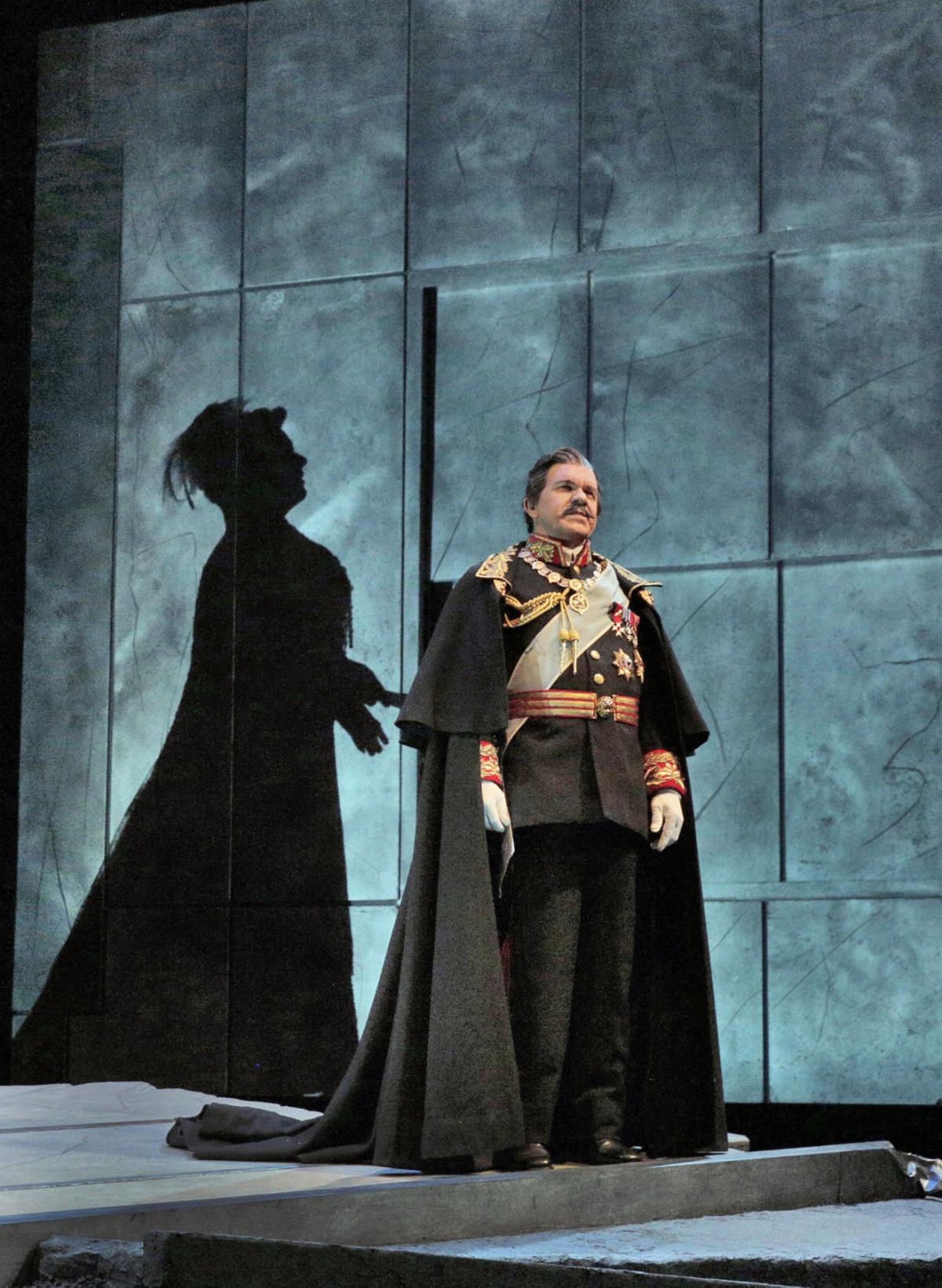 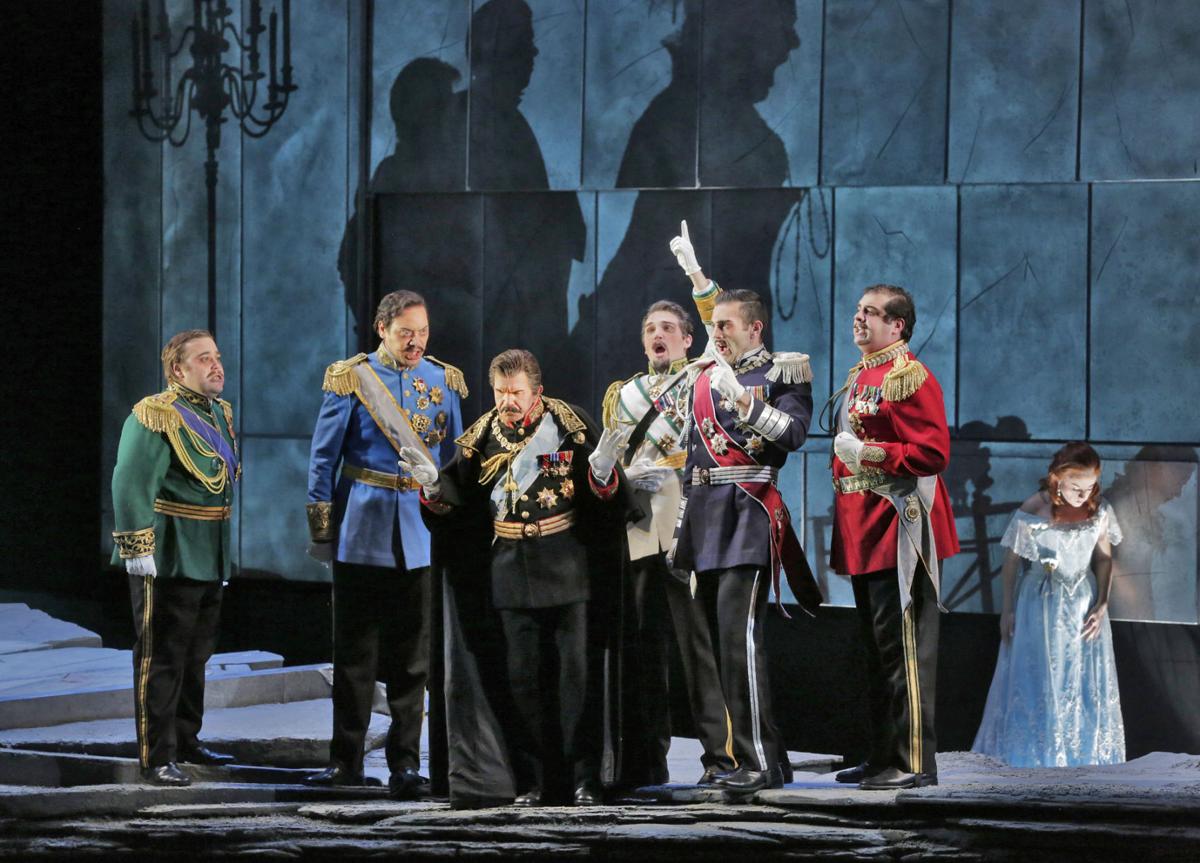 The new production of Richard Strauss’ Salome unveiled by Santa Fe Opera on Saturday affords as fine an evening of musical drama as the company’s audience can hope for. It conveys the tale with clarity and some inspired flashes of unorthodoxy, capitalizes intelligently on the available stage resources, and boasts a cast that is spot-on from start to finish.

Notwithstanding the scandal it provoked, Salome surged in popularity following its 1905 premiere. “I’m sorry that Strauss composed Salome,” lamented Kaiser Wilhelm II. “I otherwise like him very much, but with that he will do himself terrible damage.” The composer shrugged and cashed his royalty checks. “As a result of the damage I could build myself the villa in Garmisch!” he observed, referring to the beautiful alpine home he would occupy for his remaining 43 years. One might almost consider Santa Fe Opera a second “House that Salome Built.” Strauss’ operas, a particular passion of the company’s founder, John Crosby, became central to its identity. In the course of its 59 seasons, it has presented 13 of the composer’s operas (never Guntram, never Die Frau ohne Schatten), five in their American premieres. Forty-three times the company has mounted Strauss productions, and Salome has been the most visited of the bunch, given in 11 seasons. Santa Fe audiences have high standards when it comes to Strauss.

At the head of the team for this Salome are director Daniel Slater and conductor David Robertson; as it happens, they also collaborated on the 2011 revival of Berg’s Wozzeck, another apex of the company’s recent achievements. Slater views the work through a Freudian lens, a reasonable idea given the chronological overlap of Freud and Strauss. (Strauss’ Salome and Freud’s Three Essays on the Theory of Sexuality were unleashed the same year.) The action is accordingly set not in biblical times but rather in turn-of-the-century Mitteleuropa, where Herod’s royal court dines in full regalia of medals and sashes. Leslie Travers’ sets and costumes are boldly abetted by Rick Fisher’s lighting, which sometimes cast ominous shadows with the high relief of film noir.

The unhappy family at the center of the action consists of Herod; his wife, Herodias; and her daughter (his step-daughter), Salome. Herodias had previously been married to his brother, but Herod imprisoned and eventually murdered him, thereby “inheriting” Herodias and Salome. The other main protagonist is Jochanaan (John the Baptist), who rails against the royal marriage as incestuous, to Herodias’s intense annoyance. Herod holds him captive, too, but stops short of slaying him, fearful of political backlash from subjects who consider Jochanaan to be a prophet. Herod takes an unhealthy interest in Salome, who in turn takes an unhealthy interest in Jochanaan. The daughter famously performs an erotic dance for her father and demands as recompense that he give her Jochanaan’s head on a silver platter, which he ultimate does.

Slater reaches back to the source of Strauss’ libretto, Oscar Wilde’s stage-play Salomé, to recover a detail that becomes central to his interpretation: that (as he notes in a program essay) “the man who becomes [Salome’s] sexual obsession is imprisoned in the same cistern where the father she barely knew was held captive for 12 years and then murdered.” Usually the audience never sees inside the cistern, and Jochanaan is mostly heard from its cavernous distance. Slater, however, shines the light on this normally dark cell, making it one of the principal sets, showing Jochanaan scribbling his prophetic writings and, later, displaying his dismembered parts oozing a stream of blood while Salome takes her time honing in on the mouth she has been so intent on kissing. Slater also plays out the back-story in Salome’s notorious “Dance of the Seven Veils.” Rather than stage it as a solo number for Salome, he opens up the set into a rear compartment, then another, then yet another, in which are played out the events that lurk in the recesses of her memory: Herod strangling her father with his belt, hovering too close to her and leaving her feeling unclean, rendering her frozen in hysteria, a cornered animal unable to escape.

In this case, soprano Alex Penda surely could have handled the ten-minute “Dance of the Seven Veils” all on her own, and she rendered the portions of it that emphasized her own movement (choreographed by Seán Curran) with expressive grace. But what hoisted Penda’s portrayal so high were a riveting theatrical presence and a voice unusually well suited to the part. She is a creature of the stage, potentially dangerous even when wearing a gown of lacy white and aqua layers that suggest a virginal Madonna, downright psychotic when stripped down to her slip. I confessed to reservations when Penda appeared here last season as Beethoven’s Leonore, but Salome makes quite different demands and she responded to them marvelously. Her voice was powerful enough to cut through Strauss’s huge orchestra, though with opulence rather than shrillness. Her stamina was such that her interpretation just kept on growing in vocal luxury and in dramatic horror all the way through her daunting final scene, which has left more than a few Salomes gasping for air.

All of the other four principals proved exemplary in their roles. Bass-baritone Ryan McKinny, in his house debut, infused Jochanaan with sonorous resonance, the gravitas of his delivery confirming his character’s sense of self-certainty. Tenor Robert Brubaker brought years of experience to his portrayal of Herod, his tight, commanding timbre being custom-made for the role, his stage demeanor emphasizing narcissistic callousness in a way that made viewers accept it as despicable but inevitable. Dramatic mezzo-soprano Michaela Martens, also in her house debut, exceeded one’s expectations of Herodias by several orders of magnitude. The opera rather sidelines her among the characters — she is simply her husband’s wife and her daughter’s mother — but Martens’ interpretation was proof positive of the old adage about there being no small parts. When she opened her mouth, she sang stunningly with burnished tones of deep maroon. When she held her tongue, she nonetheless radiated disdain, keeping her distance with a glass of wine conveniently within reach. The strange role of Narraboth, the captain of the guard, was sumptuously entrusted to Brian Jagde, whose tenor rang out ardently until he committed suicide 40 minutes into the opera, overcome by the emotional conflict of hearing Salome, for whom he has feelings, proclaim her lust for Jochanaan. Here he prefigured Salome’s Dance by doing a little striptease himself — first his sash, then a button here, a button there, but he opted for the dagger rather than proceed further. Small parts were in every case performed capably, mostly by apprentice artists: soldiers, servants, the bickering flock of theologically divided Jews and Nazarenes.

The orchestra, considerably expanded for the occasion, played magnificently under Robertson’s baton. Precise and colorful from the outset, it bubbled up into a geyser in the first instrumental interlude. Strauss’ biographer Norman Del Mar referred to Salome as one of Strauss’ “stage tone poems,” and there were a few places early on in the performance where the balance of power was indeed weighted in the orchestra’s favor, especially when singers were positioned upstage. That issue soon dissipated, and the musical experience integrated singers and instruments into an entity that gripped with momentum and thrilled at its moments of volcanic outburst.

I read the murder-in- the-cistern 'dumb show' NOT as Herod killing Salome's father, but as a jealous Narabooth-as-spectre strangling a uniformed Jochanaan, seen by Narabooth as as Salome's new lover. The spectre carries away the green flower promised earlier to him by Salome. The now uniformed Jochanaan is the surrogate "stern" father figure Salome lost (and needed?)