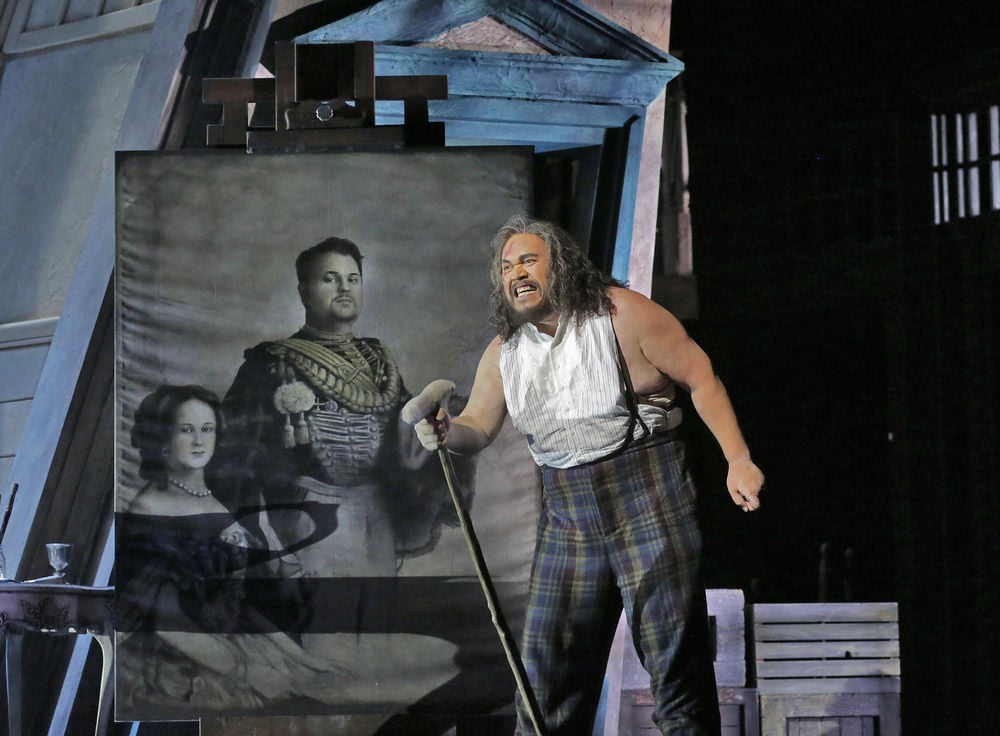 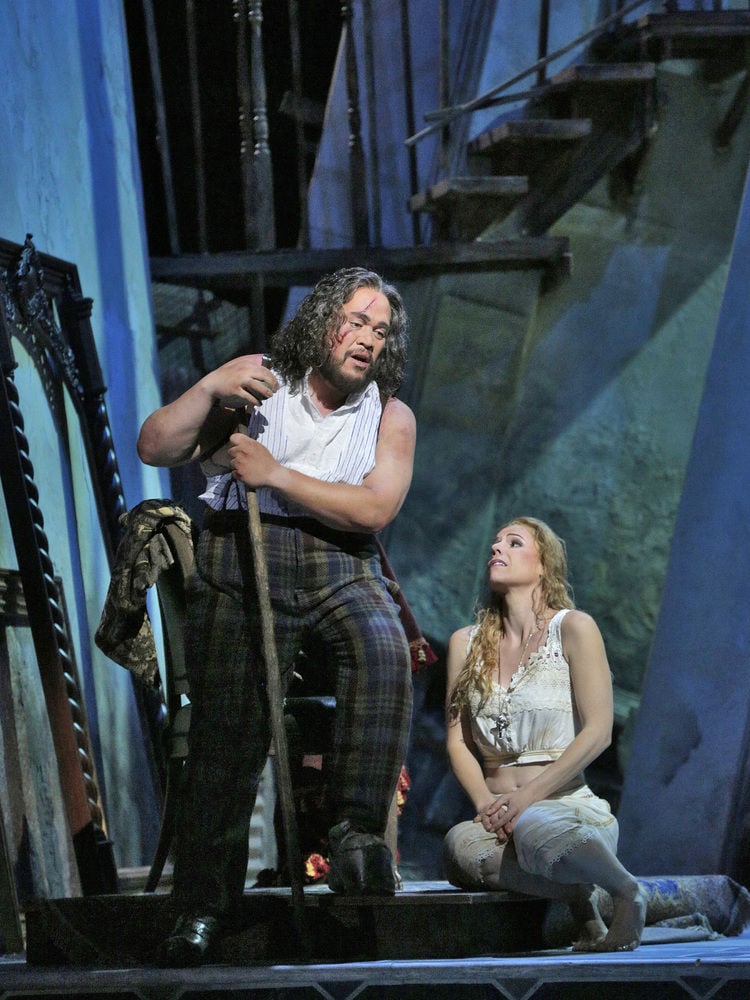 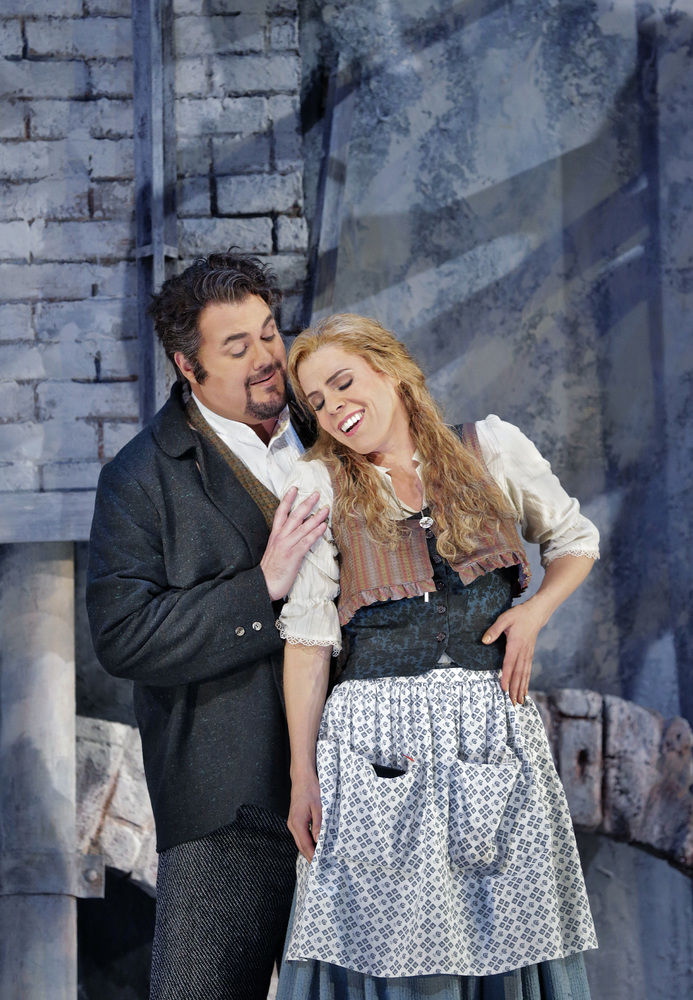 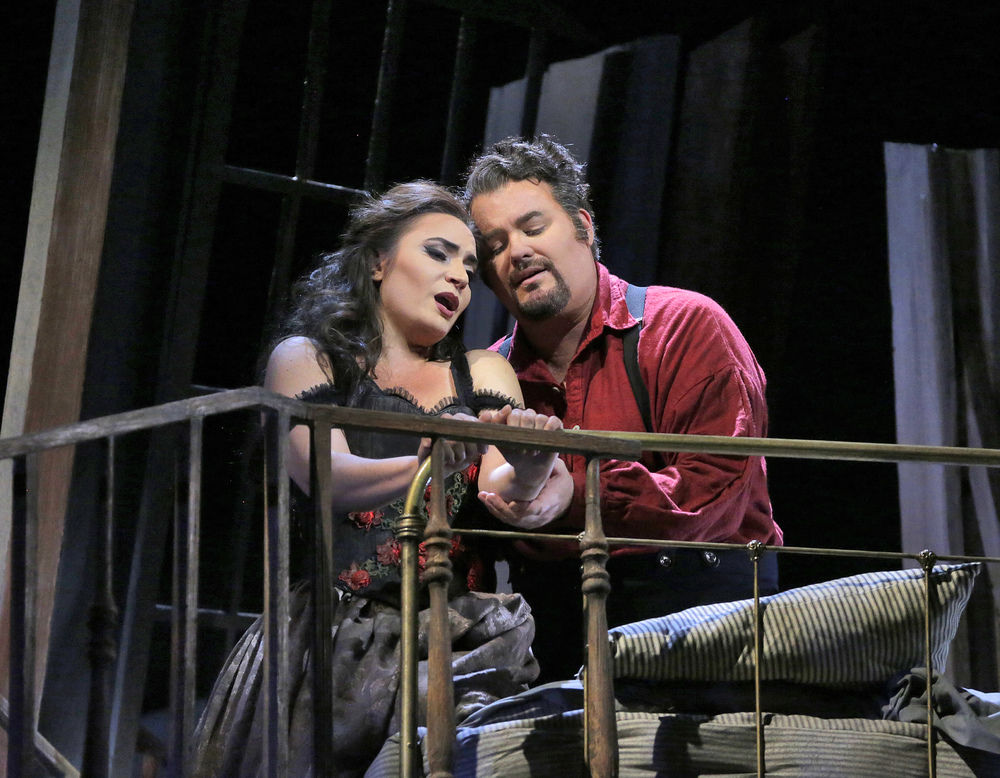 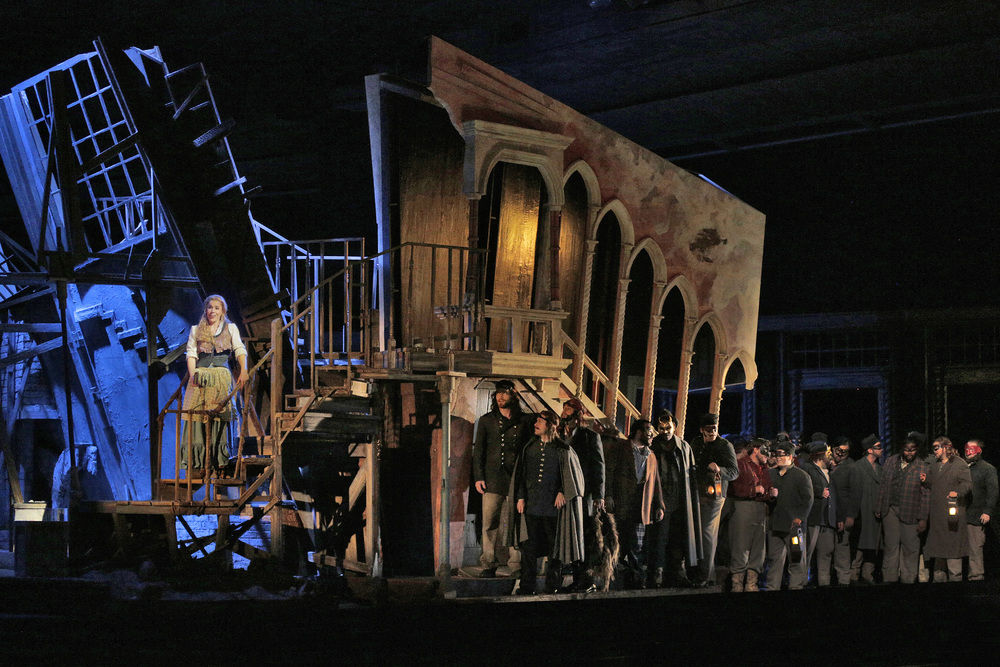 The sound of firecrackers drifted in during The Santa Fe Opera’s new production of Verdi’s Rigoletto, unveiled on Saturday evening, the Fourth of July, but the distant detonations couldn’t compete with the vocal fireworks onstage, which started as a slow burn and built in potency as the piece progressed.

There seem never to be enough “Verdi baritones” to go around, but Quinn Kelsey unquestionably has the vocal equipment to fit the part of the hapless court jester, one of the most heartbreaking roles ever crafted by the master of operatic tragedy. He showed sonic scope that could convey lyric delicacy as well as forceful outbursts. He sounded entirely comfortable in the part’s tessitura, which is centered relatively high in the baritonal range. His effortless tone was dark enough to infuse his characterization with the gravitas required, but it was illuminated with a luster that ensured clear projection throughout the house.

As a singer, he hit the ground running; his voice stood out from the crowd from his first lines in the opening party scene, and it kept on growing in vividness from there, assuming a luxurious, velvety quality by the show’s end. His arias were rendered as effective set pieces, but some of his most memorable work came in less flamboyant spots. Returning home after having a deprecation flung at him during a palace party, he muses to himself “(Quel vecchio maledivami!)” — “(That old man cursed me!).” Verdi’s score includes both the parentheses and the exclamation mark — one suggesting inwardness, the other implying extroversion — and the composer surmounts the phrase with a crescendo and then a diminuendo, all sung on the note C. This is an example of the messa di voce, the swelling of a single pitch from soft to loud and back again, a feat that sounds easy but is in fact an extraordinary challenge to execute properly. One could only admire the finesse with which Kelsey intoned this, inflecting it with precise gradation of volume and magically conveying the variety of musical indications in the score. Verdi knew full well that this would signal to an audience, in just three measures, the volatility that could flare up at any moment within Rigoletto’s tortured soul.

The plot, derived from a Victor Hugo play, revolves around the curse to which Rigoletto is referring just then. It focuses specifically on how he loses his daughter, Gilda, to the decadent Duke of Mantua, whom Rigoletto serves as court jester. Soprano Georgia Jarman proves to be a splendid Gilda, acting the part with forthright simplicity and displaying the vocal heft, timbre and agility needed to meet its demands. One of the evening’s high points was her aria “Caro nome,” which started in loveliness and ended five minutes later in otherworldly beauty — her coloratura encompassing some clearly articulated, sustained trills, to boot. Conductor Jader Bignamini had led a sturdy interpretation up to that point, but in the aria he and the orchestra supported Gilda’s musings by allowing breathing room of their own. Jarman’s aria “Tutte le feste al tempio” was similarly affecting, and the duet with her father into which it escalates was one of the evening’s most touching highpoints.

Tenor Bruce Sledge was a capable Duke of Mantua, remote in his characterization but clean and clear in his vocalism. This is a lyric tenor part, and he is a highly accomplished lyric tenor. He is probably more or less the sort of singer who would have sung this part when it was new, before tradition began to imbue it with more stentorian punch. We hear him as a “Rossini tenor.” Verdi might have heard him as a “Verdi tenor.” Anyway, he brings vocal lightness and musical clarity to the role, and one might justify his dramatic aloofness as not inappropriate to a part in which a Duke does stand socially apart from his courtiers. I don’t think there was a note all evening he didn’t produce right on target, but he often seemed to be operating in parallel to other characters, rather than interacting with them.

In the smaller roles, particular excitement was generated by mezzo-soprano Nicole Piccolomini, as the prostitute Maddalena. Her principal musical contribution comes in the quartet, “Bella figlia dell’amore,” in which she and the three principals intertwined in elegant balance yet could be appreciated individually. Her full-bodied voice had a dramatic edge that made it more than usually interesting. One hopes this company debut will not be her last appearance here. Bass Peixin Chen had the requisite range for Sparafucile but took a foursquare approach to the part, which would benefit from a more reptilian interpretation. Robert Pomakov portrayed Count Monterone worthily, and numerous members of the company’s apprentice program upheld the parts of courtiers and so on.

Lee Blakeley’s production was frustrating. Adrian Linford designed the sets and costumes. The sets seemed cramped, often involving decrepit Italian Renaissance exteriors or interiors set askew and crowded onto the stage’s busy turntable. The costumes are an exercise in puzzlement. The courtiers’ garb includes (but is not limited to) Renaissance pantaloons, 1960s hot pants, and gold-rush miners’ outfits that may be an advertisement for next season’s La fanciulla del West. Some of the gentlemen wore dandified striped pants and patterned vests that suggested the fellows from La bohème, and Rigoletto wore a tatty outfit surmounted by a bowler hat that looked to be borrowed from Waiting for Godot. The lighting, by Rick Fisher, was also confusing, with shadows from scaffolds and latticework casting shadows on the performers’ faces and failing to guide viewers’ eyes through the jumble of activity Blakeley imposed on the production.

The opening party scene brims with characters, and the audience needs help figuring out who is important and who isn’t. In this case, it’s an orgy, and a viewer’s eye just might linger on, say, a freeze-frame full stop in which a nymphomaniac’s mouth is poised on the Duke’s crotch, when the more significant action may be located elsewhere. Before that scene is over, knives have been drawn and two courtiers lie dead and bleeding on top of the wild-boar entrée, but you may wonder just how this transpired if you hadn’t happened to be looking at the right place at the right time. The hustle-bustle can impinge on the musical effect. Let’s be honest: Who among us is going to pay much attention to a tenor off to the side singing “Parmi veder le lagrime” when he’s being upstaged by seven uninhibited, barely clad pleasure-seekers writhing and twerking at center stage? This production finds its most compelling moments when the fewest participants are in action. Even then, one might wish that key moments of the characters’ reactions were directed more pointedly, that the production made a bit more of the melodramatic flashes that give this grim opera its peculiar charm, and that it took care to never deflect attention from the excellent musicianship that makes the evening memorable.

What: The Santa Fe Opera’s production of Rigoletto