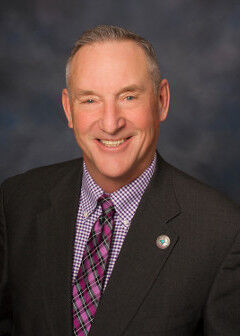 One of the more shameful episodes orchestrated by the New Mexico House of Representatives has kept storefront lenders happy.

They are still charging 175 percent interest rates in one of the poorest states in America.

New Mexicans who have the least and need money the most often are ensnared in debt because of this government-sanctioned system mimicking loan sharking.

Horror stories about the storefront lending industry are common. I’ll mention one.

Other borrowers risk and often lose title to their vehicles when they can’t keep up with 175 percent loan payments.

A bill to check predatory lending this year cleared the state Senate with ease. It would have limited interest rates to 36 percent.

That rate might sound exorbitant, but it mirrors the U.S. Military Lending Act, which was created to protect young soldiers from being crushed by debt.

Sen. Bill Soules, D-Las Cruces, succeeded in getting the credit union association to support the bill to cap interest rates at 36 percent. His initiative should have negated the long-standing argument that low-income people would have no place to turn for loans without those benevolent storefront lenders.

Instead, the storefront lending industry and its lobbyists flexed their muscle.

The Senate bill was mauled in the House Judiciary Committee, where Democratic Rep. Eliseo Alcon of Milan presented an amendment authored by the lenders.

These lawmakers disregarded all testimony from credit union executives, who said they could make small loans to people with bad credit or no credit at 36 percent.

“Let me ask you something,” Alcon said one day during the heat of the debate. “Why are the credit unions getting involved now?”

A lawmaker from a low-income area, Alcon should have been celebrating a chance to reduce interest rates for his constituents. Instead, he questioned the businesses that emerged to blunt predatory lenders.

Alcon left no doubt which companies have the most influence.

In the end, the Senate’s reform bill failed. The 175 percent interest rate remains in place, just as the industry lobbyists wanted.

Soules said the defeat left him depressed for two weeks. He has recovered sufficiently to begin work on another bill to end the 175 percent interest rate.

His idea is to start the bill in the House next time.

“They seem to be more concerned about who’s getting credit for things,” Soules said.

In truth, House members should be concerned about backlash for their defense of odious interest rates.

Louis might already have felt the negative effects of assisting the storefront lenders. Her campaign to fill a seat in Congress went nowhere soon after she stood for 99 percent interest rates.

Had Egolf marshaled his members, most of whom claim to be champions of the little guy, the bill should have passed. Democrats dominate the House 45-24.

There’s also one independent, Rep. Phelps Anderson of Roswell. Anderson, from a wealthy family that founded Atlantic Richfield oil company, told me an interest rate of 36 percent is more than enough to make small loans profitable.

Count Anderson as a vote for the reform bill. If an independent stands against the storefront lenders, Egolf’s caucus should have no reason to perpetuate a system that keeps people in poverty.

When it came to legalizing recreational cannabis, most legislators said if Colorado could do it, New Mexico could, too. They made cannabis a priority, even meeting in special session to legalize the drug.

Cannabis companies have lobbyists, lawyers and spin doctors. People so desperate they can be trapped by storefront lenders asked the House of Representatives for nothing. It’s exactly what they got.

The 175% rate is usurious and morally bankrupt. Wrote my representatives when the session began to urge the 36% rate and again after the debacle described in this article to register my extreme disappointment. Suggest a letter campaign might "empower" some spine next time and give our reps the political support needed to overcome resistance.

I would just like to mention that unfortunately these types of services are necessary for folks living slightly behind paycheck to paycheck. There were fintech alternatives which goals to address this such as LendingClub and Kiva but those rely on internet savvy borrowers with higher requirements. Ultimately if NM shuts down payday loans they will go elsewhere for them until there is a good alternative. Rates are high because risk is high - supply and demand.

You must have missed the part of the editorial where credit union execs said that they could make those type of loans at a 36% rate.

It is more than depressing that Dems could not find the support to overcome predatory lending in our state. You might as well get a loan from the Mafia if you are paying 175 percent. Given the poverty rate in our state, this interest rate perpetuates and fosters economic inequality. It is time for every member of the NM legislature to support the proposed rate of 36 percent--prevention of predatory lending for the military should be extended to everyone IMHO. It's a no-brainer and credit companies will still make a bundle

I agree with you, Milan, that it is a shame and a pity that Democratic representatives have sold themselves to predatory lenders. I also agree that Speaker Egoff could line up the necessary votes and I hope he will in the next session. I think it is worth noting that no one expects any Republican except Anderson to support help for working people.

And, of course, Anderson is now an Independent. He has been expelled from the Republican party for the apostasy of thinking government might help the non-rich.

As a registered Democrat I find it embarrassing that so many of our Democratic “representatives” vote against the interests of the little guy. Hopefully these DINOs will face primary challengers who are true Democrats.

Money talks, malarkey walks! Maybe this is something this newspaper can get behind and promote. Might even take the Christian angle about predatory lenders which just might get the church behind it.

This continues to be a moral blight on New Mexico's most vulnerable. Democrats need to step up and do the right thing this time. Without question!