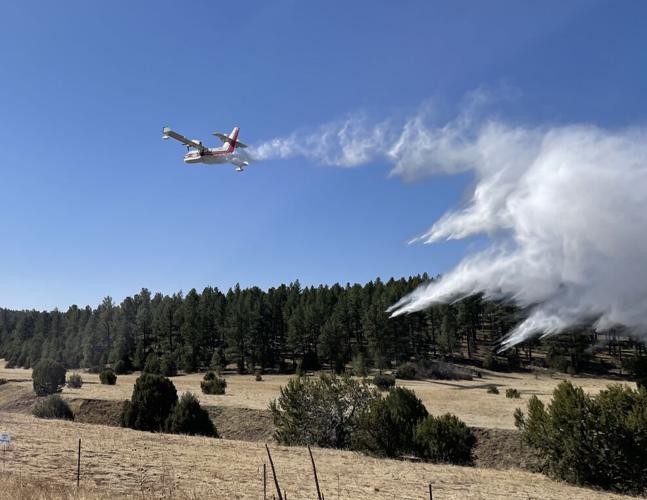 A Super Scooper airplane drops water Wednesday along the west edge of N.M. 283 near Las Vegas, N.M., in an effort to impede the progress of the Hermits Peak and Calf Canyon Fire, which was just over a mile from the city. 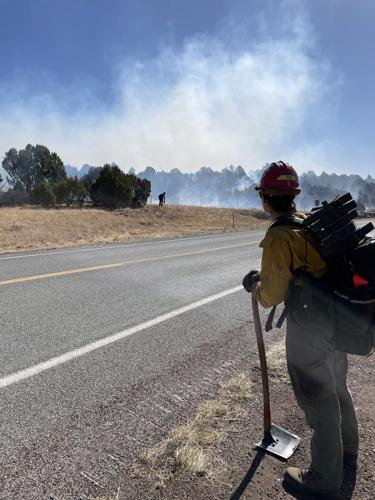 A firefighter from the Baker River Hotshots watches Wednesday as fire crews burn off roadside brush that could be ignited by the Hermits Peak and Calf Canyon Fire west of Las Vegas. 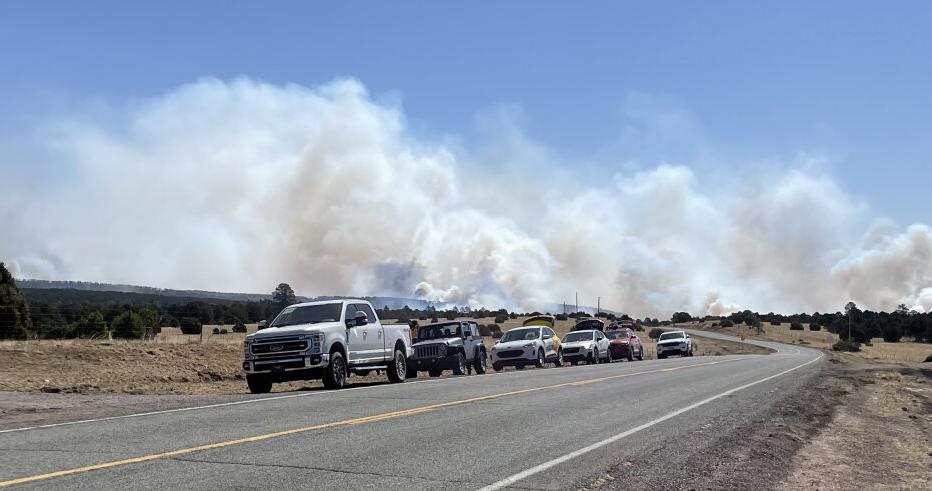 Smoke plumes rise from a defensive burn firefighters started just west of Las Vegas to slow the spread of the Hermits Peak and Calf Canyon Fire on Wednesday.

The defenders of the west side of Las Vegas are armed with chain saws and setting up barriers with hand tools and heavy equipment.

Some of the fight takes place in the air as well, with lumbering aircraft dumping water and fire retardant. Time is of the essence because the enemy — fire, aided by its closest ally, wind — continues to move forward.

The most recent chapter in the Hermits Peak and Calf Canyon Fire saga moved toward a new scene — an east-west state highway on the south side of town that firefighters believe can be the bulwark that begins to turn things in their favor.

“I’ll be optimistic: It’s gonna hold,” said Don Muise, a veteran firefighter and team safety officer for a portion of the 1,200 firefighters now battling the biggest blaze in America.

The fire, roughly shaped like a fist from from Las Vegas to beyond Mora, was a little over a mile from the city of 13,000 on Wednesday. As Muise spoke, wind gusts nearing 50 mph at times drowned out his comments. Behind him, smoke from the small prescribed burns across the highway drifted into the air, creating their own wispy plume.

Fortunately, they could not be mistaken for the larger, 160,000-acre conflagration, some of which has been menacing Las Vegas for days. In all, the fire is just 20 percent contained.

Those not fighting the fire — or trying to avoid the fire — had not been allowed on the line by officials until Wednesday. At first glance, it was hard to avoid the striking similarity to a military operation.

The scene was every bit a conflict, with Super Scooper planes dredging water from nearby lakes — up to 2,000 gallons per plane — and laying it down as a wet blanket along the west side of N.M. 283.

The firefighters — who work 16-hour shifts 14 days in a row and then get three days off to rest — are weighed down with at least 40 pounds of equipment, including fire shields, water and food. Pursuant to the military approach, some carry ready-to-eat kits for nourishment.

More than 1,208 people are now engaged in the fires in San Miguel and Mora counties.

The defense is orchestrated with the help of lookouts on nearby hills and commanders with radios strapped to their hips so they can provide directions as fire and firefighters move forward, backward and to the side.

“We’re organized like [the military],” said Muise. “Our operations are based on some military stuff: an aviation assault, a ground assault, heavy machinery.”

The goal, Muise said, pointing to the highway, is to “hold that line.”

But the Hermits Peak and Calf Canyon Fire has a will of its own. Though it may back down for a day — on Thursday, those winds are expected to dissipate, according to the National Weather Service in Albuquerque — next week’s unfriendly forecast might make it seem like the wind, and not the fire crews, will be supported by reinforcements.

Come Friday, or perhaps Saturday, the wind will grow stronger again, whipping to 40-45 mph, with gusts of 60 mph possible through the middle of next week, said meteorologist David Craft of the weather service.

“Seems like the [fire] area of greatest concern will get very little of a break,” Craft said.

Humidity levels in the single-digit range and a lack of rain in next week’s forecast won’t help the fire crews either, he said.

Muise knows what is coming.

Dehydration, not burns, brings down some on the line, he said.

Meanwhile, San Miguel County Sheriff Chris Lopez said many of those who have been displaced are anxious to return. He held out some hope people could begin returning but likely not until fire lines have been tested by the weekend’s expected fierce winds.

“[The thing] I’ve mentioned over and over in the days that we’ve been dealing with this is repopulation,” he said in a Wednesday night briefing. “That’s one thing we’re very interested in. … Everybody wants to get back home. And so as we continue to improve conditions … we can test lines that have been developed when we do enter that wind event or that extreme fire weather event over the weekend. I really feel with the work that’s being done I feel good that we’ll be able to open up some areas — if those lines are able to withstand that extreme weather event.”

The battle near Las Vegas came the same day President Joe Biden approved Gov. Michelle Lujan Grisham’s request for a presidential disaster declaration for New Mexico because of the widespread fires around the state in April and May.

Most presidential disaster declarations come only after the end of a catastrophic event, such as a tornado, flood or fire. But state officials say they worked with federal authorities to process New Mexico’s request faster than usual. Such federal assistance can include funding for housing support, crisis counseling, disaster unemployment benefits, child care programs and loan aid.

Assistance will be available for Colfax, Lincoln, Mora, Valencia and San Miguel counties.

“We don’t know what the likelihood is of it happening, but nonetheless, I think it’s important that the president come and address our people and bring [members of his Cabinet] to assure the residents that those services are going to be secured for them,” he said.

The approval comes as at least three other fires work their way through various stages of growth. The Cerro Pelado Fire, which started several miles east of Jemez Springs on April 22 and has been fueled by heavy winds, covered nearly 27,000 acres by Wednesday afternoon and was only 13 percent contained.

The fire continues to creep closer to Los Alamos National Laboratory property and now is a bit more than five miles away.

In a news release from Los Alamos County, one official noted the difference between the Cerro Pelado and Hermits Peak and Calf Canyon Fire.

“The good news is that this fire is behaving more like a controlled burn,” said Rich Nieto, Los Alamos National Laboratory’s wildland fire manager. “It’s not burning in the tree canopy like the Calf Canyon and Hermits Peak fires. It’s burning the brush and fallen trees on the ground.

“There’s a lot of smoke, but the smoke can be misleading and make things appear worse than they are,” he said. “We’re still taking this fire very seriously because conditions can always change, but currently, we feel confident that our mitigation measures will protect laboratory property and the county.”

Santa Fe National Forest spokeswoman Julie Anne Overton said firefighters battling the blaze remain “worried about winds switching direction.” There is also concern the fire could jump N.M. 4 and move into the Valles Caldera National Preserve where, she said, “it would take off into those dry grasses.”

But firefighters continue to make headway on the Cooks Peak Fire north of Ocate, which started April 17. Though it remains around 60,000 acres, firefighters have it 89 percent contained.

And a new wildfire, the Bear Trap Fire in the San Mateo mountain range, started Sunday and was burning about 2,300 acres as of Wednesday, with no containment.

Asked if firefighters on the Hermits Peak and Calf Canyon Fire might lose that battle despite all the planning, Muise shook his head no.

Local organizations are increasing efforts to ensure people and animals who fled their homes have the goods and resources they need.

Crime, punishment and the search for elusive truth

Shaping Diego into a good horse

The unreal world of politicians, evil and benevolent