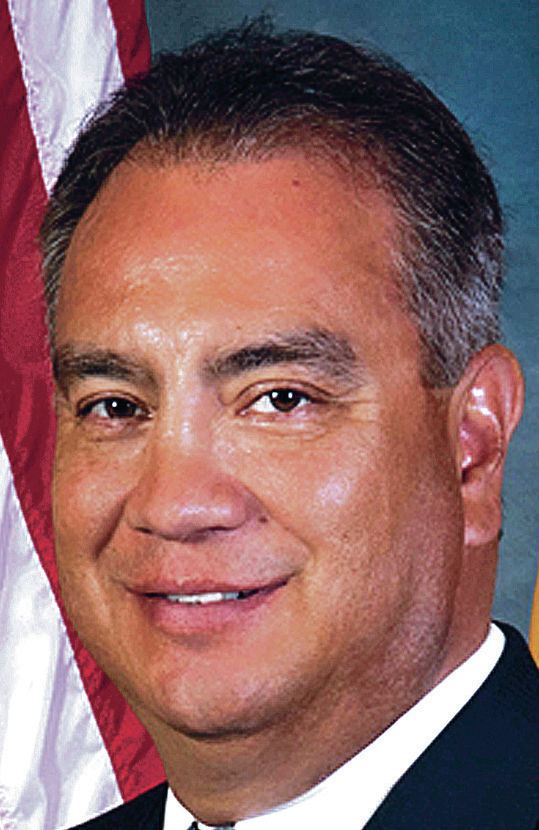 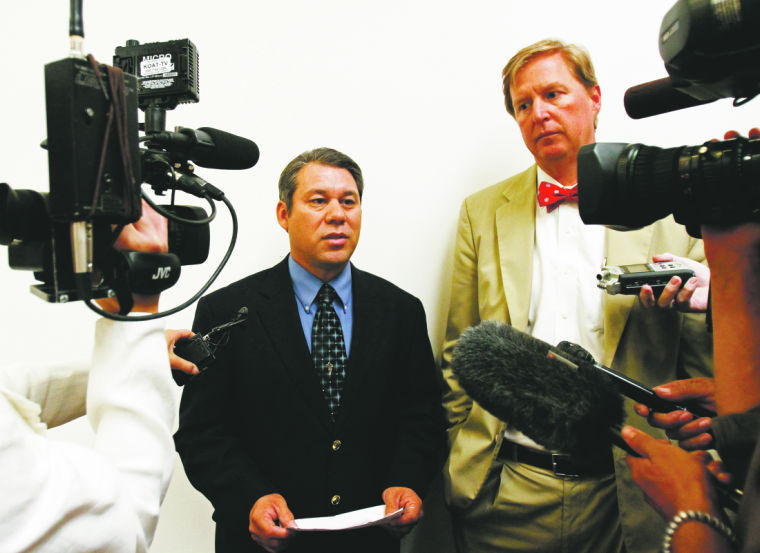 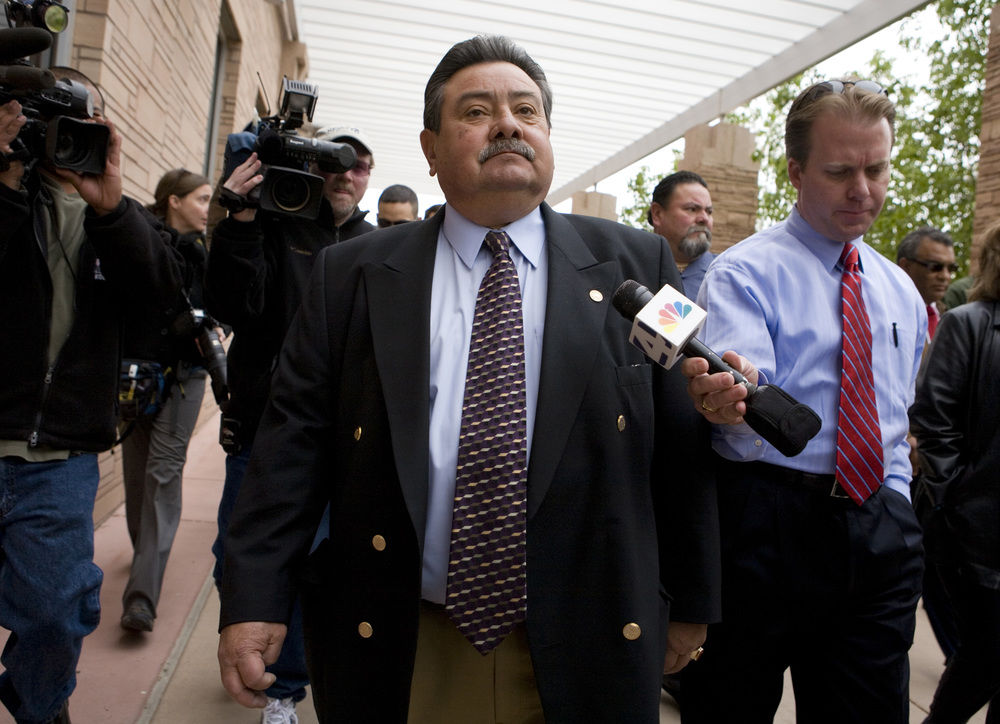 The conviction of former state Senate strongman Manny Aragon, D-Albuquerque, who used his legislative skills to skim money from the construction of the Bernalillo County courthouse did not result in an ethics commission. New Mexican file photo. 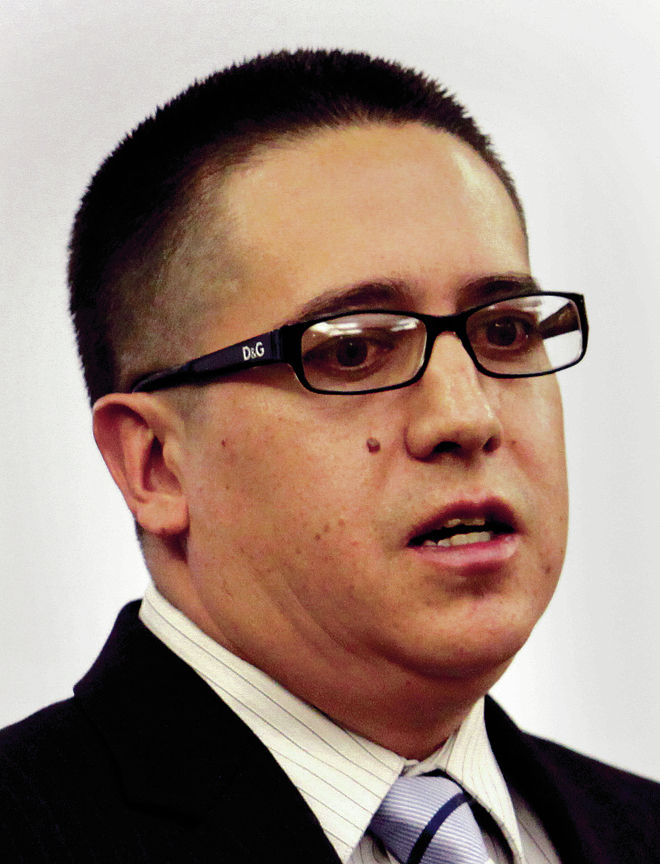 Diana Duran wipes her tears during her sentencing at Judge T. Glenn Ellington's district courtroom on Monday, December 14, 2015. Ellington sentenced her to 30 days in jail, a fine of $14,000 and restitution totaling $13,866. Luis Sanchez Saturno/The New Mexican

The conviction of former state Senate strongman Manny Aragon, D-Albuquerque, who used his legislative skills to skim money from the construction of the Bernalillo County courthouse did not result in an ethics commission. New Mexican file photo.

Some notable cases in which New Mexico public officials were jailed, imprisoned or given probation:

Dianna Duran, secretary of state: She starts a 30-day jail sentence Friday after pleading guilty to two felonies and four misdemeanors for stealing campaign donations and falsifying public records. She was the first Republican elected as secretary of state in New Mexico since 1928.

Tommy Rodella, Rio Arriba County sheriff: In 2014, a federal jury convicted him of violating the civil rights of a 26-year-old motorist in an ugly roadside assault. Rodella, a Democrat whom the state Supreme Court in 2008 had removed from the Rio Arriba County Magistrate Court bench for misconduct, is serving 10 years and one month in federal prison.

Greg Solano, Santa Fe County sheriff: In 2011, he pleaded guilty to stealing county property, such as holsters and protective vests, then selling the items on the Internet. Solano, a Democrat, served six weeks of a 12-week sentence in the county jail.

Jerome Block Jr., state Public Regulation Commission member: In 2011, he served 60 days in prison for a psychological evaluation after pleading guilty to a series of felonies, including identity theft and credit card theft. Block, a Democrat, also served time in jail for using illegal drugs, a violation of his court-supervised treatment program.

Manny Aragon, state senator: In 2008, the Albuquerque Democrat pleaded guilty in 2008 to conspiracy and mail fraud in a scheme to siphon money from the construction of a courthouse in Albuquerque. Aragon served about four and a half years in federal prison. He was released in 2013.

Robert Vigil, state treasurer: In 2006, a jury convicted him of one count of attempted extortion but acquitted him of 23 other charges of extortion and racketeering. A protege of Montoya, Democrat Vigil served two years and two months in federal prison.

Michael Murphy, state district judge in Las Cruces: In 2013, he pleaded guilty to a misdemeanor, violating the Governmental Conduct Act, even though a special prosecutor claimed Murphy had solicited bribes. As part of the plea bargain, prosecutors dropped four felony charges against Murphy, a Democrat. A judge suspended a 364-day jail sentence, so Murphy served no time.

Albert “Pat” Murdoch, state district judge in Albuquerque: In 2011 he was charged with raping a 23-year-old prostitute. Murdoch was allowed to retire and a special prosecutor, Angela “Spence” Pacheco of Santa Fe, declined to pursue the charges against him, saying the evidence did not support the charge.

James Lujan, public works director for Santa Fe County: In 2013, he pleaded guilty to receiving bribes and conspiracy in the case of a paving company that landed the lion’s share of county contracts. Lujan received a six-month sentence that he was allowed to serve on electronic monitoring instead of behind bars.

Ron Olguin, state representative: In 1992, Olguin, D-Albuquerque, was sentenced to 18 months in prison after he was convicted in state District Court of soliciting a $15,000 bribe in exchange for obtaining $100,000 from the Legislature for an Albuquerque crime counseling program.

Herman Grace, director of the Governor’s Office of Community Affairs: In 1982, he was sentenced to 4½ years in federal prison after he confessed that he embezzled $13,000 from an agency intended to help the poor. He was also ordered to pay $13,000 in restitution.

Phillip Troutman, state investment officer, and Ken Johnson, deputy state treasurer: In 1985, they were convicted of conspiracy to commit extortion after telling a New York bank that state money wouldn’t be invested there unless the bank made a political contribution. Both received two years in prison and a $5,000 fine.

Earl Hartley, state treasurer: In 1985, Hartley, a Democrat, who had also previously served as state attorney general, pleaded guilty to a misdemeanor for misusing more than $4,000 of the Western State Treasurers Association’s money. He was ordered to pay the money back and fined $1,000. Gov. Toney Anaya, a Democrat, pardoned him in 1986. Even after pleading guilty, Hartley insisted he never committed a crime.

John Ramming, governor’s assistant: In 1986, the former assistant to Gov. Anaya was convicted on 13 counts of bribery, fraud, conspiracy and racketeering for steering a reported $2.8 million in disaster relief contracts to a friend. He served a year in prison after Anaya pardoned him on all but one of the counts, conspiracy. Twelve years earlier, Ramming had pleaded guilty to embezzlement when he was a lawyer in Taos. He was later pardoned for that crime by Gov. Jerry Apodaca, a Democrat. In 1995, House Speaker Raymond Sanchez and Senate President Pro Tem Manny Aragon, both D-Albuquerque, appointed Ramming to the Criminal and Juvenile Justice Coordinating Council.

Joe Ruiz, deputy state insurance superintendent: In 2008, Ruiz was sentenced to four years in prison after he was convicted on 30 charges related to a scheme in which he got insurance firms to donate to charities in lieu of paying fines. Ruiz claimed he was only following orders from his boss at the time, former Insurance Superintendent Eric Serna. Serna, a former State Corporation Commission member, had stepped down from his job as superintendent of insurance in 2006 after the Public Regulation Commission agreed to drop its investigation of him.

Carol Sloan, state Public Regulation Commission member: In 2010, Sloan, D-Gallup, was convicted of battering a romantic rival. She refused to leave office until she was forced out by the state Supreme Court.

Jesse Kornegay, state treasurer: In 1975, he was sentenced to two years in federal prison after pleading guilty to lying to a federal grand jury in Albuquerque about a payment on a loan in his 1972 U.S. Senate Democratic primary race.

Eddie Barboa, state senator: In 1975, Barboa, D-Albuquerque, was charged in federal court with possession of heroin with intent to distribute it. The government said that Barboa tried to set up a large sale of heroin with a man he thought was a New York underworld figure, but who was actually an undercover agent. Barboa said that he was trying to stop drug traffic in Albuquerque’s South Valley when he met the agent. But in two trials, Barboa got hung juries. After the second trial, federal prosecutors decided not to retry Barboa.

Hubert Beasley, state police chief; Alfonso Luchini “Happy” Apodaca, Doña Ana County sheriff; and Roy Sandman, Doña Ana County sheriff’s deputy: All three received one-year prison sentences for violating the civil rights of a black man questioned in the 1949 murder of Ovida “Cricket” Coogler of Las Cruces. A federal court jury found them guilty in the torture of Wesley Byrd in an attempt to get him to confess to Coogler’s murder. The state later charged Jerry Nuzum, a running back for the Pittsburgh Steelers, in Coogler’s murder. A judge acquitted Nuzum in 1951, finding that the state had no credible evidence against him. Coogler’s murder was never solved.

Do you think former Secretary of State Dianna Duran received an appropriate sentence for the fraud charges to which she pleaded guilty?

A state District Court judge sentenced Duran to 30 days in prison, five years of probation and 2,000 hours of community service. He also fined her $14,000 and ordered her to pay another $13,866 in restitution.

Former New Mexico Secretary of State Dianna Duran was escorted by police when she turned herself in to the Santa Fe County jail Friday to begin her 30-day sentence for illegally using money from her election fund to feed her gambling addiction.

Looks some were left out like Eric Serna an Rebecca Jiron and others.

What, only one person on that long list is identified as a Republican? Interesting.

And of course the many that got away, like Old Bill, are also left wing Ds, that is commonplace in NM, they have the monopoly on corruption and malfeasance in office, maybe Duran was really a closet D?

Two that got away.

A forensic accounting firm was hired in the matter of Greg Solano. It was revealed that in addition to Salona, a second person was improperly accessing the property room. It is to the shame of all involved that the second person's name was never released and that there was no further investigation.

We should also remember that Richardson was referred to the Justice Department by the FEC. Again, nothing happened.