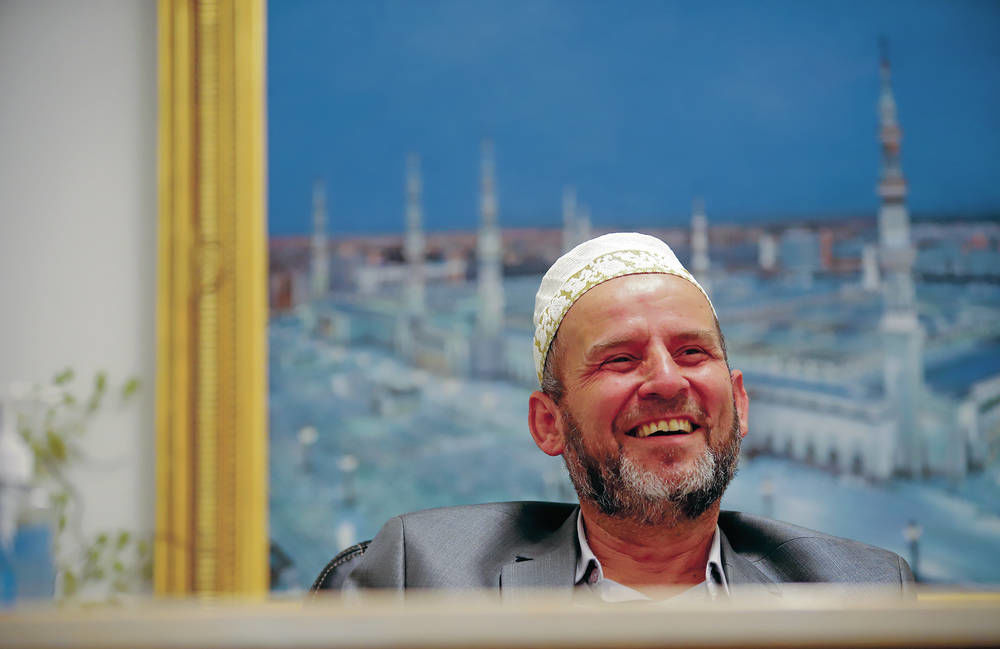 Imam Ibrahim Habach says he aims to increase the outreach of the Masjid Al-Rahma mosque in Santa Fe. In a way, he says, the scrutiny of radicalism and terrorism has increased awareness of Islam, creating a path for a healthier discussion. Gabriela Campos/The New Mexican 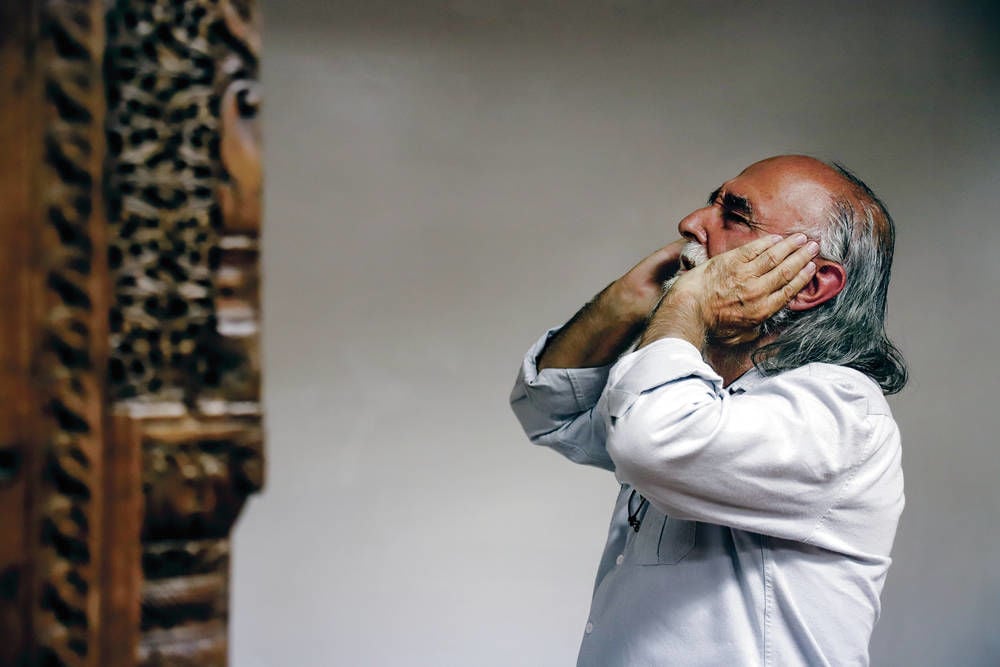 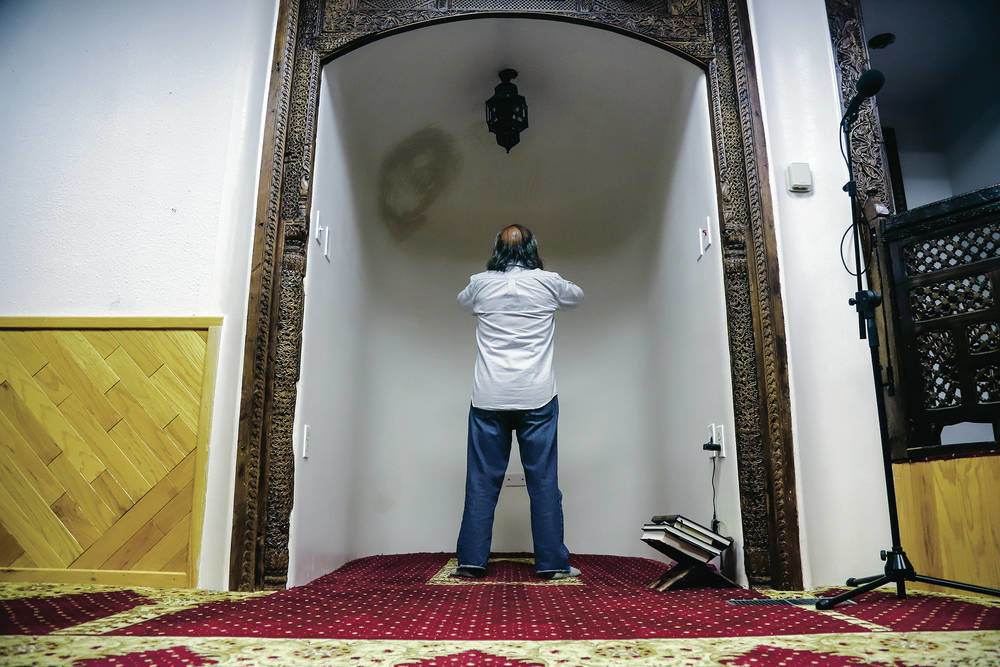 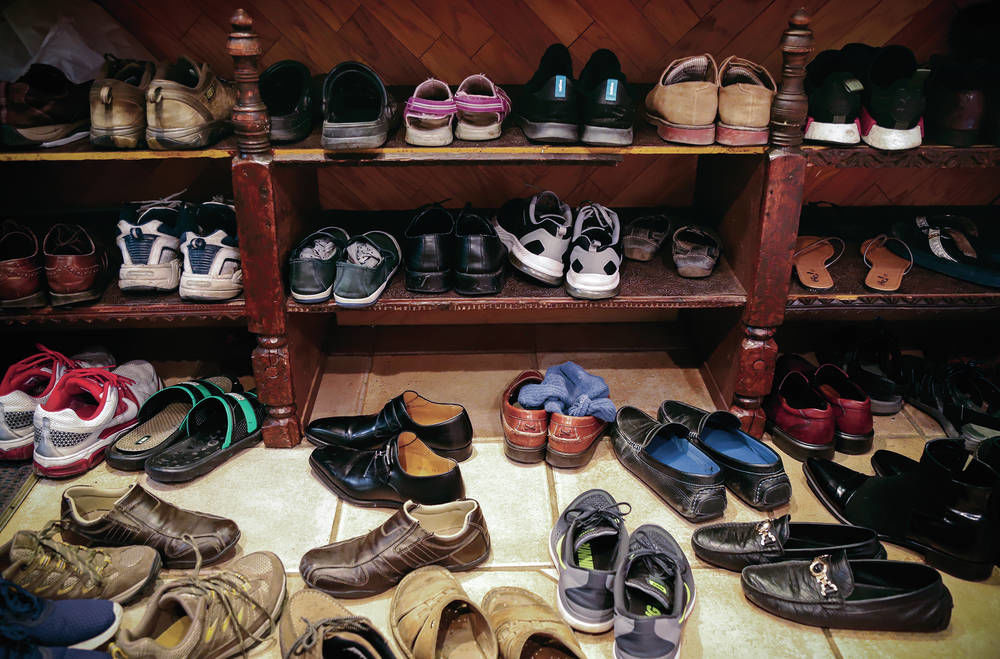 The shoes of those who came to Masjid Al-Rahma for Friday services sit at the Santa Fe mosque. Gabriela Campos/The New Mexican

Imam Ibrahim Habach says he aims to increase the outreach of the Masjid Al-Rahma mosque in Santa Fe. In a way, he says, the scrutiny of radicalism and terrorism has increased awareness of Islam, creating a path for a healthier discussion. Gabriela Campos/The New Mexican

The shoes of those who came to Masjid Al-Rahma for Friday services sit at the Santa Fe mosque. Gabriela Campos/The New Mexican

Zeina Benhalimmay sometimes feel isolated as a Muslim in New Mexico, but it melts away during the Festival of the Sacrifice.

When the sun starts to drape the Sangre de Cristo Mountains in rose and blush 10 days into the last month of the Islamic calendar, Benhalim will listen to the call to prayer echo before one of the most important services of the year.

When the prayers end, smiles will spread around the Santa Fe mosque as up to 200 people greet one another in celebration.

But the sense of isolation — perhaps this year more than most — is palpable.

“It’s still beautiful, but it’s small in New Mexico,” she said. “It’s like Christmas. If everybody is celebrating it, you feel it more. Here, you feel more alone.”

On Tuesday, Muslims across the United States will celebrate one of Islam’s major holidays, Eid al-Adha. For Muslims in Northern New Mexico, the celebration comes amid a national spotlight on a Taos County court case involving reports of Islamic extremism and charges of child abuse and child abduction.

The case drew national attention — and created tensions — when prosecutors alleged one of the suspects, Siraj Ibn Wahhaj, had been training at least one of the 11 children at a remote compound near the Colorado border to use assault rifles to attack key institutions such as schools and banks.

District Judge Sarah Backus on Monday denied prosecutors’ request to hold without bail the five defendants in the case, saying there wasn’t satisfactory evidence of a “plan afoot” or that the defendants had in the past shown to be a danger to the community. Wahhaj, however, remains jailed on charges he abducted his 3-year-old son, Abdul-Ghani Wahhaj, from Georgia last year.

The state Office of the Medical Investigator in Albuquerque determined last week that the remains of a boy found at the dilapidated compound near Amalia were those of Abdul-Ghani.

While area Muslims say the national attention to the situation in Taos County feeds unfair stereotypes, they also note it’s balanced this week by a holiday that centers on family and spirituality.

“The word ‘Islam’ means peace and the surrender to God,” said Imam Ibrahim Habach, religious leader at the Masjid Al-Rahma mosque in Santa Fe. “How you address things done on democracy? You would not address it as democracy as the issue, but as the person.”

According to the 2010 U.S. Religion Census, which reports the number of congregations by county in the U.S. for different faith groups, about 4,000 Muslims lived in New Mexico, with about 450 in Santa Fe — about 0.3 percent of the city’s population.

As a minority among minority groups in the state, Habach said he is resigned to discrimination and misconceptions about his faith after living in the U.S. for 25 years since emigrating from Damascus, Syria.

“This is nothing new for me,” he said with a shrug. “[The public] points to everybody who is different.”

Benhalim, originally from Egypt and owner of Tribes Coffeehouse on Zafarano Drive, has lived in Santa Fe for about 26 years. She lived in Abiquiú for three years after moving from Texas, and said New Mexico, while having a small population of Muslims, is more open to her faith.

She said she feels comfortable here, but she’s had to adapt. After the terrorist attacks of Sept. 11, 2001, Benhalim said people stared at her because she wore a hijab, the Muslim headscarf. Going to the grocery store became a burden as people traced her steps with their eyes.

In the end, she chose to stop wearing a hijab because it became contradictive of its purpose of modesty.

“Islam comes from living in peace,” she said. “At the very end it became annoying and stressful for me.”

Aamna Nayyar wears a hijab, but when she first moved to the U.S. from Pakistan about 22 years ago, her husband was concerned for her. Despite worries, she wanted to continue her choice to show modesty in line with her religious beliefs.

“There’s always going to be somebody that’s not happy with you,” she said. “I realize it’s their problem, not mine.”

Nayyar lives in Rio Rancho and has been the director of the dental department at Santa Fe Community College for about 17 years. She said most people are friendly, but she also is resigned to discrimination and ignorant questions regarding her country, women’s rights and religion.

The dentist lived in Indiana, Ohio, Kentucky and Florida before settling in New Mexico and said she prefers the directness of people here as they ask questions about Islam.

“As a human, yes, I get annoyed, but it doesn’t stay with me,” she said. “I feel it adds responsibility on our shoulders to go and talk with more people and discuss Islam.”

Yet constantly trying to redefine the discussion and people’s misperceptions takes its toll, Nayar said, especially when some people expect her to apologize for something others have done — and that has nothing to do with her faith.

“It gets exhausting when people try to put words in your mouth,” she said.

Four months ago, Habach moved from Florida to New Mexico to head the Santa Fe mosque, which he said draws about 50 to 60 people for Friday services. He said the Muslim community isn’t very active in Santa Fe, and part of his goal is to increase the mosque’s outreach. In a way, he added, the scrutiny of radicalism and terrorism has increased awareness of Islam, creating a path for a healthier discussion.

At the same time, Josef Cabré, a board member of the mosque, said he sees a bias in crime reports and news coverage as officials are quick to point out when a perpetrator is part of a religious or ethnic minority.

“They ever say it’s a Christian white guy?” Cabré said shaking his head.

In the end, Habach said criminals and terrorists do not represent the billions of people practicing Islam or the nature of the faith.

“Islam is by action, not by name,” he said. “To be Muslim is very simple. To understand Islam … needs a lot of explanation. This is what the people are missing.”

What is Eid al-Adha?

Eid al-Adha, one of two annual festivals in the Islamic calendar, involves prayer, lambs and family.