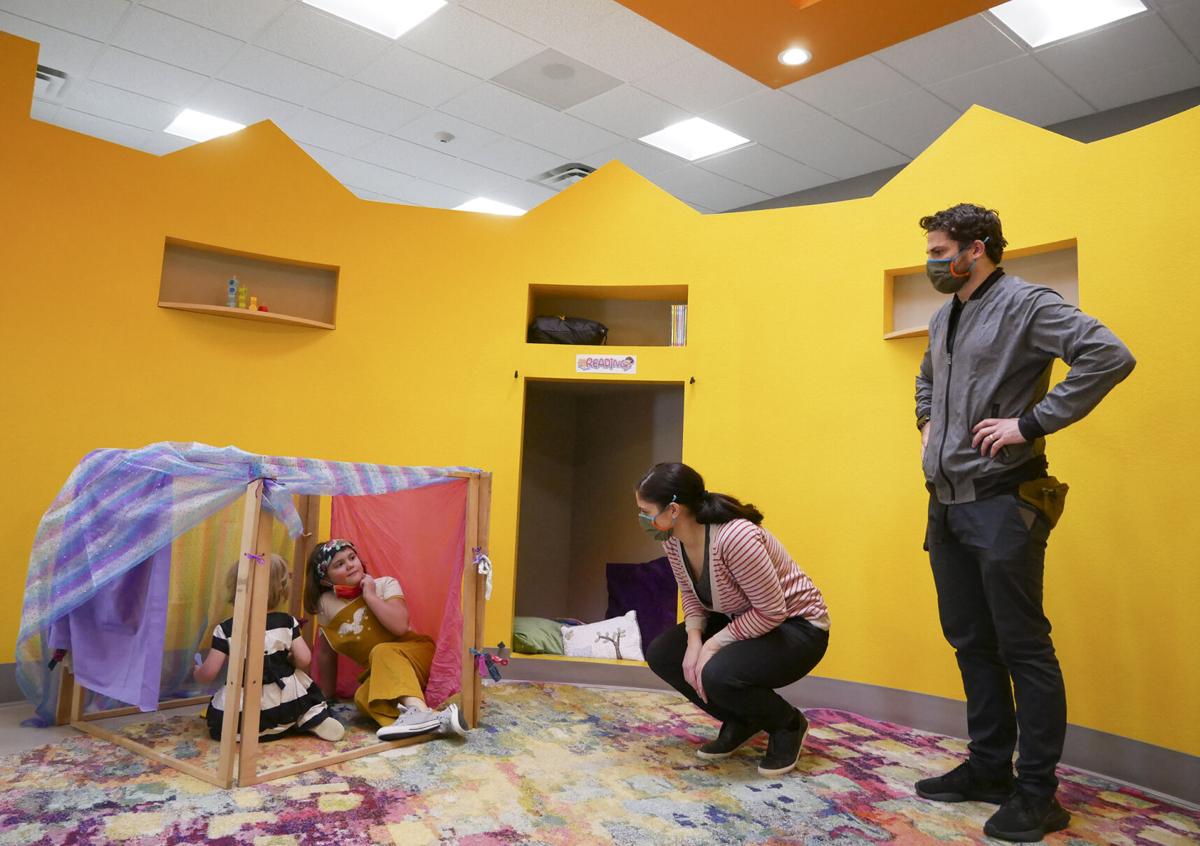 Shane Knoll, right, and Topa Augustine, co-directors of the new Prism Autism Center in Santa Fe, watch their daughters Nika, 7, and Sawyer, 3, who do not have autism, play earlier this month in the center. The 6,300-square-foot facility on Parkway Drive near Meow Wolf occupies the former space of nonprofit ARTsmart. 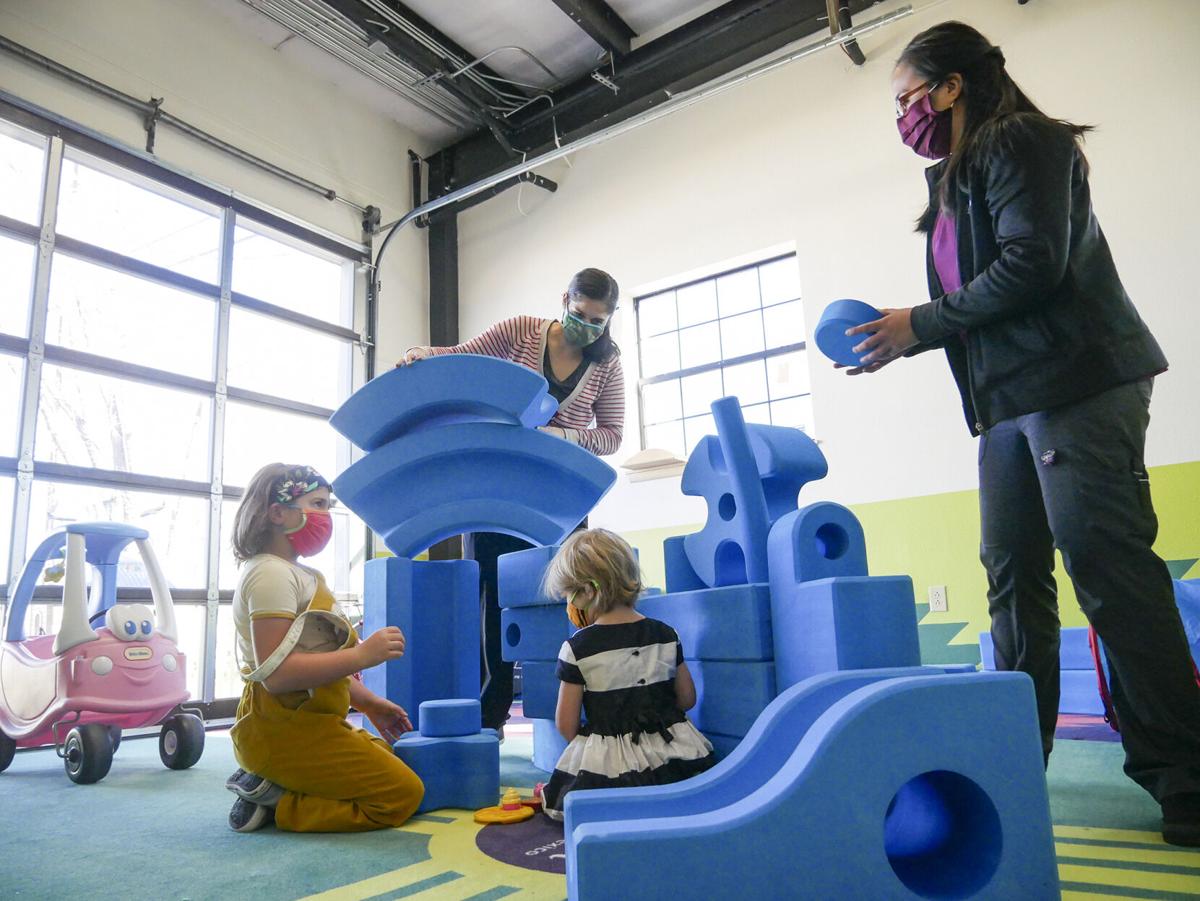 Lorena Luevano, right, part of the new staff at Prism Autism Services in Santa Fe, helps build a fort with Topa Augustine, co-director of the center, as Augustine’s daughters Nike, 7, and Sawyer, 3, who do not have autism, provide assistance in the center’s physical activity room. 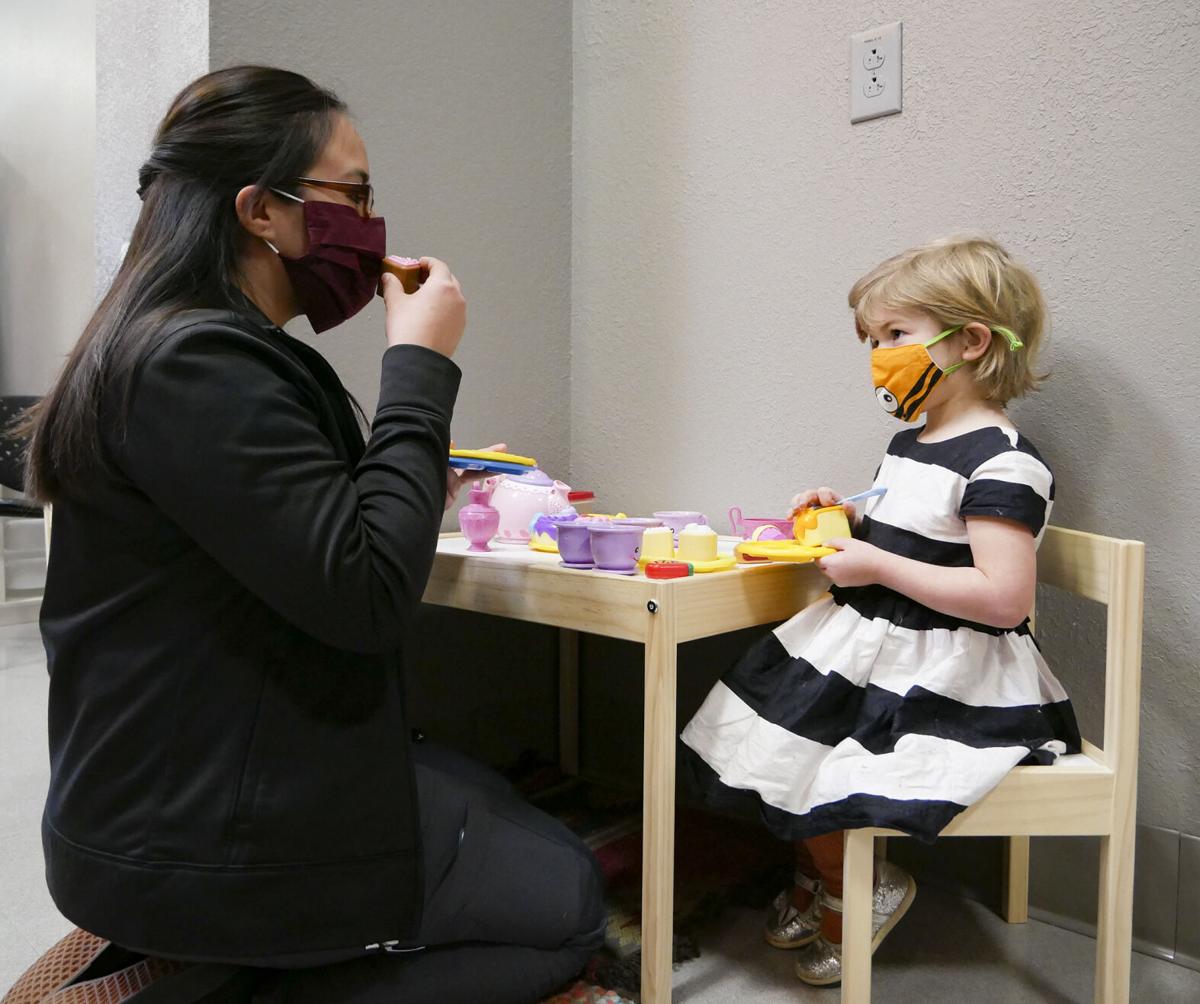 Lorena Luevano, right, part of the new staff at Prism Autism Services in Santa Fe, plays tea party with Sawyer Knoll, 3, who does not have autism and is the daughter of the center's co-directors, Shane Knoll and Topa Augustine.

Shane Knoll, right, and Topa Augustine, co-directors of the new Prism Autism Center in Santa Fe, watch their daughters Nika, 7, and Sawyer, 3, who do not have autism, play earlier this month in the center. The 6,300-square-foot facility on Parkway Drive near Meow Wolf occupies the former space of nonprofit ARTsmart.

Lorena Luevano, right, part of the new staff at Prism Autism Services in Santa Fe, helps build a fort with Topa Augustine, co-director of the center, as Augustine’s daughters Nike, 7, and Sawyer, 3, who do not have autism, provide assistance in the center’s physical activity room.

Lorena Luevano, right, part of the new staff at Prism Autism Services in Santa Fe, plays tea party with Sawyer Knoll, 3, who does not have autism and is the daughter of the center's co-directors, Shane Knoll and Topa Augustine.

A discouraging discovery has awaited many parents of children with autism in Northern New Mexico soon after receiving an initial diagnosis.

Treatments are discussed and therapies recommended, but when it comes to actually finding facilities in the region that offer autism services, parents are confronted with few options and long waitlists.

“It’s a shock receiving that diagnosis. It’s even scarier when you start looking for services or help in the Santa Fe community and there’s really no advice, and when you dig deeper, very few services,” said the father of a 9-year-old with autism who was granted anonymity to protect his child’s identity.

A frustrating five-year journey searching for services for their daughter has finally led the father and his wife to a new center that seeks to address a long-standing need for autism resources in a region professionals in the field say is severely underserved.

The colorful, spacious 6,300-square-foot facility on Parkway Drive near Meow Wolf is a vibrant setting where kids have ample room to roam while receiving one-on-one attention.

Co-directors Topa Augustine and Shane Knoll, a married pair of board-certified behavior analysts, intend to create a fun and welcoming environment where children with autism can blossom.

“We just want to do our best to help serve the need in the community,” Knoll said. “Our values are meeting a child where they’re at, but also making sure that child is happy and having an enjoyable time. We want all of our kiddos to want to walk through that door, not be resistant to coming in here.”

A native of Santa Fe, Augustine went to college on the East Coast but was unable to find a job in her field when she was looking to move home after becoming pregnant with her first child. The lack of employment opportunities further opened her eyes to a dearth of autism services in the area.

“As a young parent, you want your child to have every resource available, and I think it can inhibit people who move away from coming back here because it can be hard to raise a family when you don’t have those resources,” said Augustine, who has two young daughters.

After time spent working in Michigan, Knoll’s home state, the couple moved to New Mexico four years ago and found jobs in Albuquerque, where autism centers are more common but waitlists are still prevalent.

There, Augustine and Knoll began working for Prism Autism Services and its owner Andrea Montoya, a Pojoaque native dedicated to expanding autism resources in the state.

Montoya founded Prism in 2017 with a center in Los Lunas before opening a second location in Albuquerque. In Augustine and Knoll, she said she saw the perfect people to direct the opening of a new center in Santa Fe.

“Their years of experience not just in New Mexico but outside of the state have enabled them to chain together skills to provide the best ABA treatment in Northern New Mexico,” Montoya said.

“Their commitment to making changes in clients’ lives, I’ve never seen anything like it.”

Prism’s Santa Fe location joins a branch of the nationwide Center for Autism and Related Disorders as the only ABA autism treatment centers in the community.

While the need for such services in Santa Fe remains great, Montoya said reaching out to other areas in Northern New Mexico that are “beyond underserved,” such as Española and the Native American pueblos, is also high priority.

A mother named Erin, who asked for her last name to be omitted to protect her child’s identity, was living in rural Rio Arriba County in 2015 when her son was diagnosed with autism. She recalled the frustration of receiving treatment recommendations after the diagnosis, only to find there were no services nearby.

She said her son, now 10, attends public school. But as the coronavirus pandemic has altered education for all students in the state, she’s watched her son fall behind as online learning has failed to address his individual needs.

While seeking tutoring for her son through Santa Fe’s May Center for Learning, Erin said the new Prism center was suggested as an option. After a tour with Augustine and Knoll, she enrolled her son at Prism and he will take his online courses at the center and receive one-on-one support to develop the skills that don’t come naturally to him, such as organizing and completing his work.

Erin sees Prism as a revelatory addition to the region that could change the life of her son and many others with autism.

“I can’t explain how much relief it was to finally have a door open that we could access,” she said.

“Topa and Shane are amazing,” Erin added. “They came here specifically to work in this region, and their journey is critical to families like ours. It’s a landmark moment for folks who have kiddos on the spectrum.”

In its first month of operation, Prism is starting out small with a staff of nine that serves six clients from ages 2 to 10. Montoya noted there’s room to grow; Prism’s Albuquerque center is a similar-sized facility and has about 40 clients.

Fostering community involvement is another priority. Augustine and Knoll have already been in contact with a local gym and a youth outdoor adventure program, discussing ways to facilitate safe opportunities for children with autism to interact in settings that may be unfamiliar.

“It’s been really nice to see members of the community willing and wanting to reach out and get involved,” Augustine said. “We talk a lot about acceptance when it comes to diversity of races and genders, but that hasn’t always included neurodiversity.”

Montoya’s long-term vision is for Prism to support those interested in working in autism services to help fill in the large gaps in resources that have long plagued New Mexico.

“We have a lot of interns within the agency and we take training very seriously,” Montoya said. “Our goal is to really help our interns to provide the best possible services and make a positive impact in our state.”

Congratulations on the opening the new center!! I'm so glad our community has another space for our children to shine