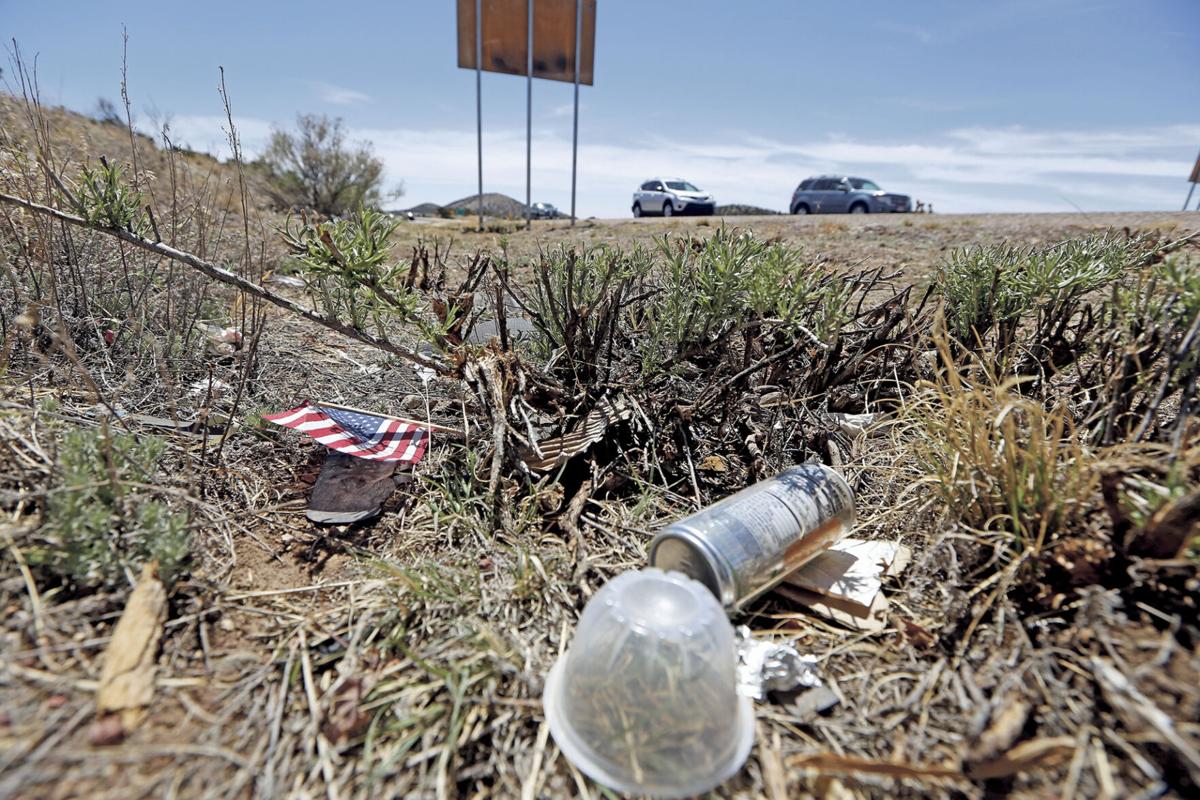 Containers and other discarded items are strewn alongside Interstate 25. State Transportation Department employees recently cleaned up roadside litter and collected 18 tons of trash. 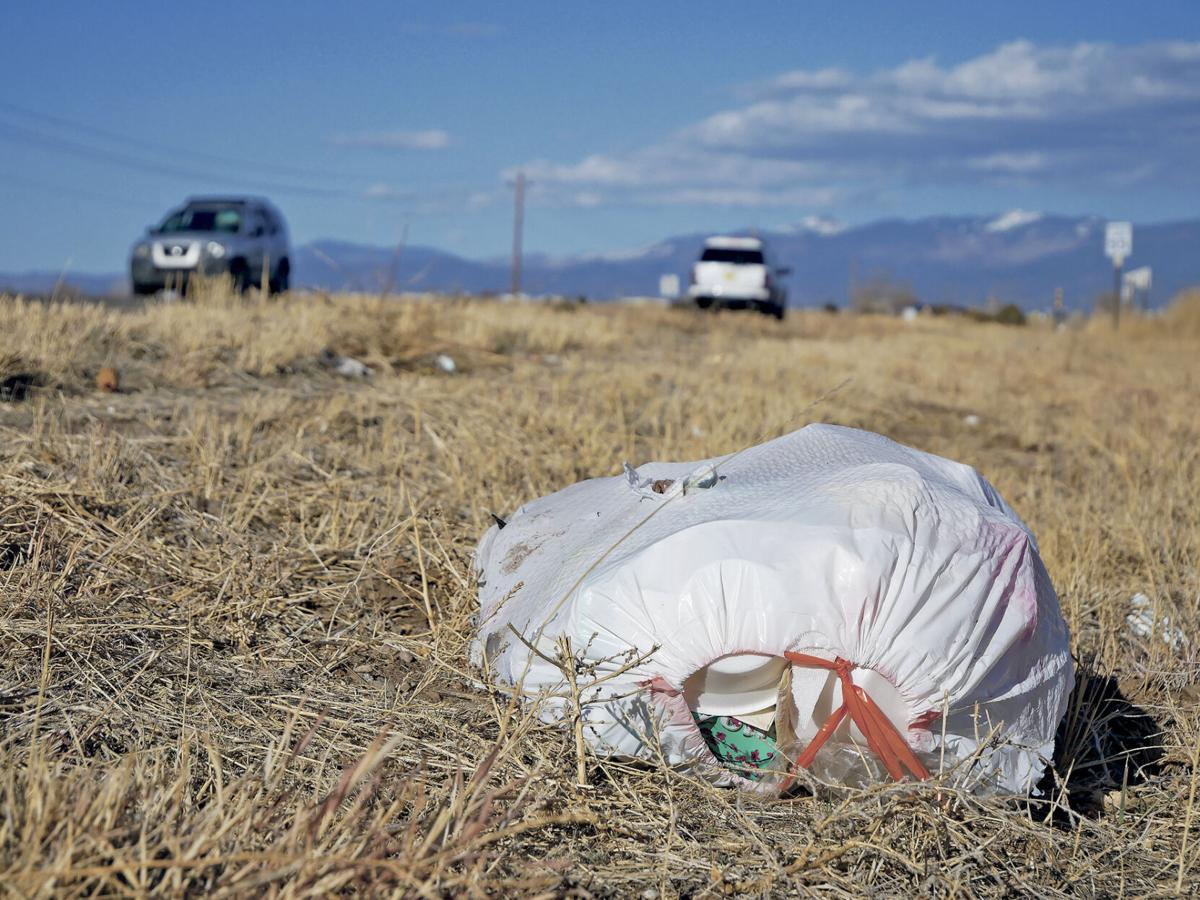 Containers and other discarded items are strewn alongside Interstate 25. State Transportation Department employees recently cleaned up roadside litter and collected 18 tons of trash.

State employees who participated in a one-day event removing roadside trash found everything but the kitchen sink — although they did scoop up a toilet.

The organized cleanup earlier this month was part of the “Toss No Mas” campaign, which was revived in an effort to encourage people to avoid littering the highways of a state that markets its natural beauty.

In all, 155 state Transportation Department employees picked up 18 tons of trash strewn along New Mexico’s roadways. The event was an amplified version of the agency’s almost daily litter patrols.

State Transportation Secretary Mike Sandoval applauded the event as a success but also bemoaned how the large quantity of litter reflects a problem that has worsened during the pandemic.

“When the pandemic started, it became more and more in the view of the public as well that there was an issue,” Sandoval said in a phone interview. “Certainly we’ve seen, for whatever reason, a rise in complaints and a rise in the amount of trash we’ve had to pick up.”

Deploying employees to remove trash for the event cost almost $27,000, money that could be spent fixing a pothole, banged-up guardrail or a broken fence, Sandoval said.

“We’d like the litter expenditure to be zero and people be responsible,” Sandoval said. “And that just means we have more money for potholes and those types of things that I think can really be a safety issue on the road.”

In the years before the pandemic, the litter problem might have fluctuated somewhat, but it didn’t become noticeably worse, as it has in the past nine months, he said.

The agency brought back the “Toss No Mas” ad campaign to help curb rampant littering, he said, adding that the cleanup event was a way to kick it into gear.

“This is obviously a very preventable issue, and so we want it to start at the root of the problem. … Cover your trash, put a tarp over it, don’t throw things out the window,” he said. “But right now, there is so much [litter] out there that we wanted to at least try to make a dent in that.”

Among the garbage they gathered was lumber, drywall, carpet, chunks of pipe, tires, used face masks, clothing, buckets, a couch, a barbecue grill and a toilet.

Some discarded items posed health risks, such as hypodermic needles and urine-filled bottles.

Dominic Gallegos, a highway maintenance supervisor, said some of the junk that ends up in ditches is due to carelessness.

People often don’t properly tie their garbage bags or secure their loads with ropes and tarp as they head to the landfill, Gallegos said.

Large items, such as a sofa, sometimes fall onto the road, creating a traffic hazard, Gallegos said.

But there also is plenty of willful littering and illegal roadside dumping, he said. Crews have seen motorists pull over and toss bags of trash, yard waste and junk from their vehicles, including at on-ramps between Albuquerque and Santa Fe, he said.

Gallegos thinks “Toss No Mas” reduces littering for a short period after the message is broadcast on the radio. Then people seem to forget and fall back to bad habits, he said.

A crew will spend a day picking up litter, but a week later, the same site will be trashed again, he said.

“It’s one of those never-ending battles,” Gallegos said.

Agency spokeswoman Kim Gallegos, who’s no relation to the maintenance supervisor, said the plan is to wait until fall, when the weather cools, to have another cleanup event.

By then, the agency can start enlisting the help of community volunteers, she said. One task is to find lower-traffic roads that are safe for members of the public to pick up litter, she said.

In the meantime, the agency will use the campaign and other messaging to encourage people to be more judicious when hauling trash and to not fling garbage onto the ground, Kim Gallegos said. So far, the campaign’s impact has been modest, she added.

“It’s gotten a little better but not much better,” she said.

Kim Gallegos said she hopes police step up enforcement of the anti-litter law that carries a $50 fine. People would be less inclined to litter if they knew there were consequences, she said.

State police spokesman Dusty Francisco said officers make a reasonable effort to cite offenders, but they can be hard to catch because New Mexico has sprawling rural areas with roadways scattered about.

“If they do come across somebody that is doing it, then by all means our officers are going to enforce the littering laws,” Francisco said.

To the hardworking Department of Transportation staff, Secretary, and the Governor: PLEASE continue to work to reduce this unsightly blight on our state by educating everyone, cleaning up the roadways, and going after the scofflaws who sometimes throw entire bags of household waste on the highway shoulders. The $27,000 cost mentioned in the article is well worth it, especially considering that the Department's budget next year is $1,013,452,400.00 (that's one Billion thirteen Million four hundred and fifty two thousand dollars and change. Yes over one BILLION dollars). So please keep up the clean up. And don't wait until Fall. Some of us even go out ourselves and pick up roadside trash, like we did on Earth Day, filling five 45 gallon bags with all sorts of trash. Just to try to address this problem that makes us look like the Land of EnTrashMent !

And why not put hidden "Critter Cams" in problem litter locations. Post pictures at that location of offenders , without names, letting people know they are being seen. Cheep with no enforcement costs.

I heartily applaud this effort and would like to see more of it. The amount of garbage on roadsides is dangerous and disgusting.

The "Tas No Mas" campaign is most likely a waste of money, especially if it is limited to radio. What is needed first is greater enforcement of litter laws, including much steeper fines, more road-signs warning against littering, surveillance cameras in problem areas, and many more bodies out there picking up trash every day. Twice-a-year clean-ups is not enough.

They need to put the DWI offenders in pink hats back out there to pick up trash. With the amount of DWI offenders I'm this town it will be cleaned up in no time.

More DWI PINK HATS please... it has a double effect.

..... Why not put "critter cams" hidden in problem trash areas, and post a few pics without names where dumping happens so they know they are seen.