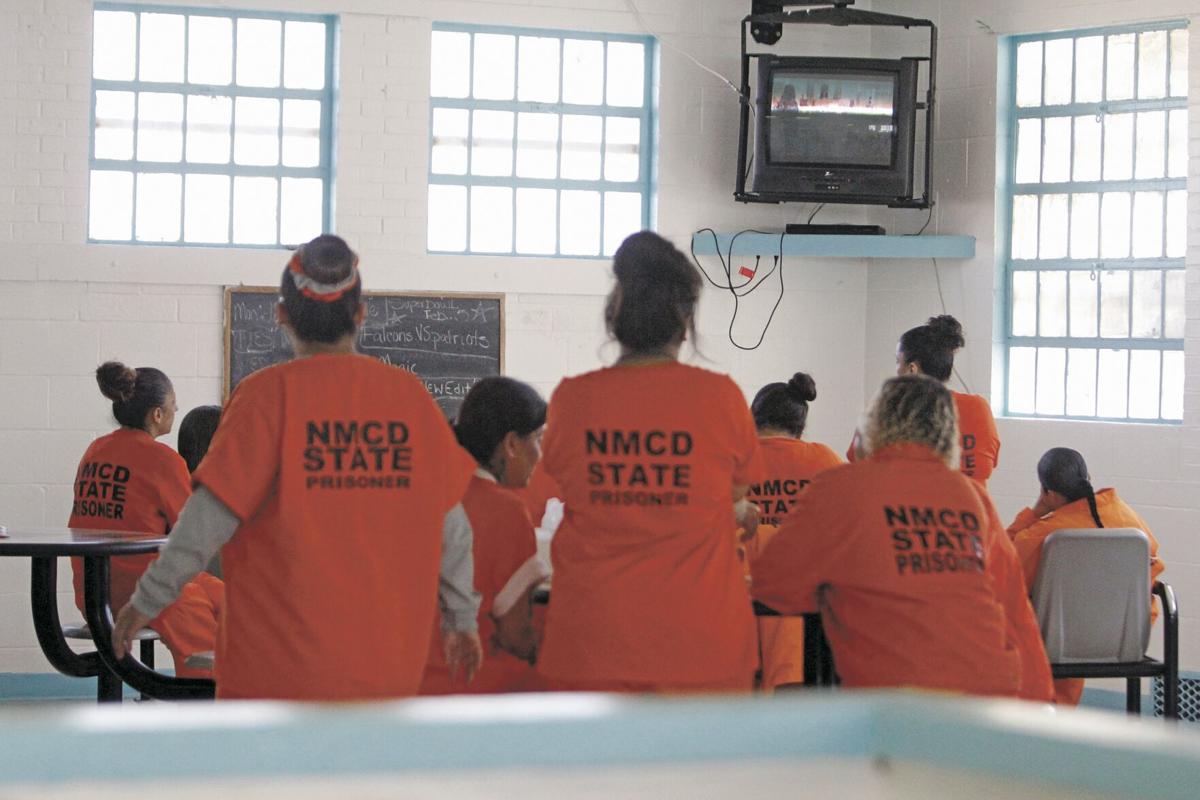 Inmates at the Springer Correctional Center watch TV in January 2017. The state says it’s shutting the prison down but doesn’t have a timeline for the process. 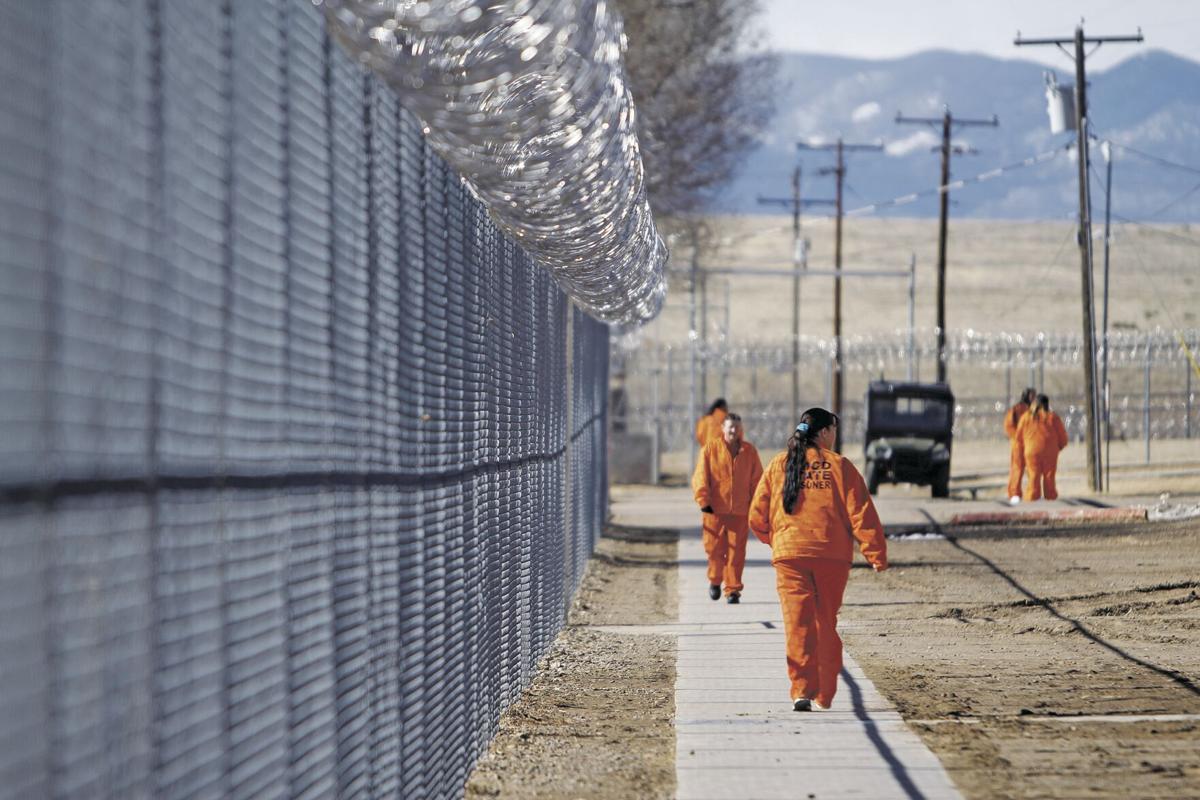 Inmates walk outside in 2017 at the Springer Correctional Center. The facility is a former boys school, and the state says its old facilities and campus-style layout are expensive to maintain. 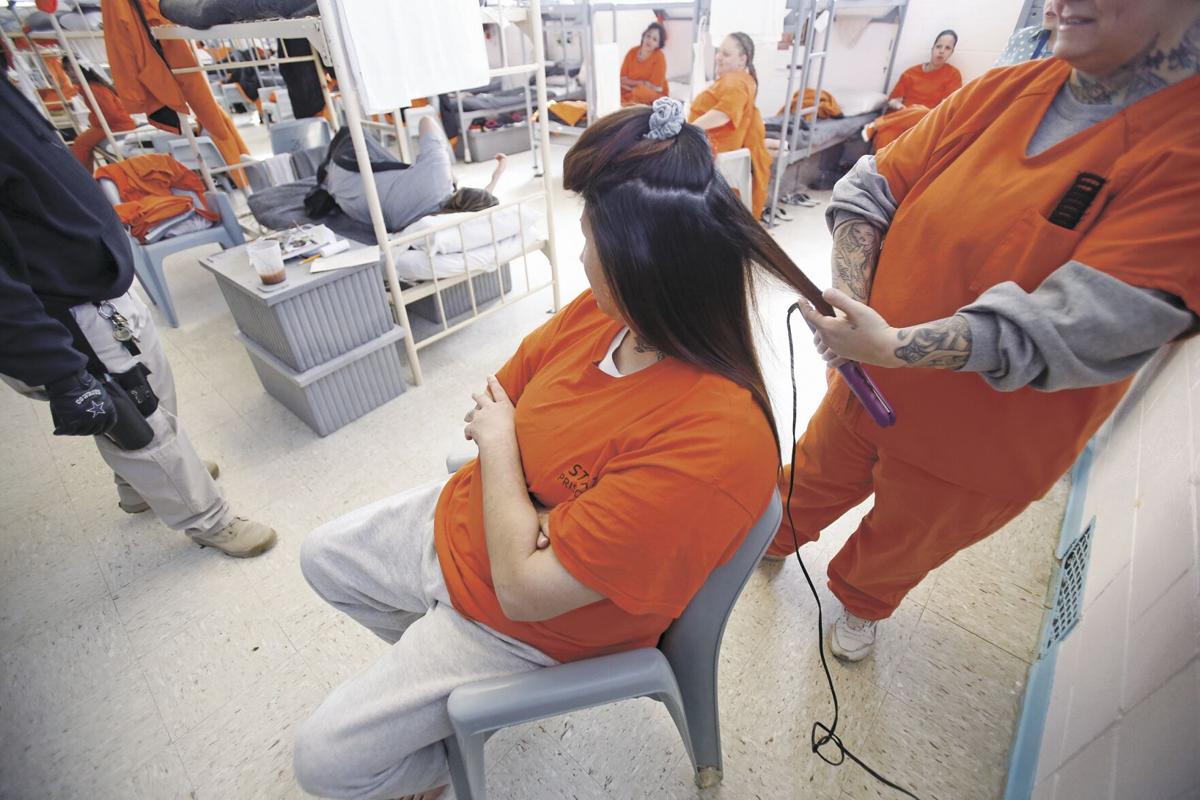 Camille Gabaldon has her hair straightened by fellow inmate Jayrina Peña in 2017 at the Springer prison.

Inmates at the Springer Correctional Center watch TV in January 2017. The state says it’s shutting the prison down but doesn’t have a timeline for the process.

Inmates walk outside in 2017 at the Springer Correctional Center. The facility is a former boys school, and the state says its old facilities and campus-style layout are expensive to maintain.

Camille Gabaldon has her hair straightened by fellow inmate Jayrina Peña in 2017 at the Springer prison.

The state announced Friday it is planning to close Springer Correctional Center, a boys school-turned-women’s prison near the Colorado border that has been plagued with sexual assault claims since female inmates were moved there in 2016.

A spokeswoman for Gov. Michelle Lujan Grisham said in an email Corrections Secretary Alisha Tafoya Lucero “under the governor’s authorization has already initiated planning for closure of the Springer facility, including planning for the safe transfer of inmates and employment transitions for workers.”

The email came in response to The New Mexican‘s questions about the prison.

About two hours later, Tafoya Lucero said in a statement, “I want to be very clear to the community of Springer: We are in only the preliminary planning phase, and no formal timeline has been set.

“Closure of the facility will allow for more fiscally responsible operation of the remaining state facilities, while maintaining safe housing for the inmate population,” the statement continued.

Springer has about 1,000 residents.

The town’s mayor, Boe Lopez, said in an interview Friday he was “blindsided” by the news, which he said he began hearing “on the streets” late Thursday.

“We’re very disappointed with that news,” Lopez said. “We are currently trying to get ahold of our legislators and congressmen to see if we can have a meeting virtually or in person to see if we can come up with an alternate plan because they are one of the largest employers in our area, and it would just kill our economy, not just in Springer but in the surrounding communities.”

The mayor said the prison provides about 150 jobs for employees who come from as far away as Raton, Mora and Las Vegas, N.M. Those jobs will be hard to replace, he said.

He was disappointed, Lopez said, not only because state corrections officials didn’t speak with him about the plan but because it wasn’t announced until after the recent legislative session, robbing local officials of any opportunity to lobby against the closure.

“We’ve been through his before when they went from the New Mexico Boys School to corrections,” the mayor said. Back then, he added, “they had community meetings to inform the public what was going on. This one just came out of nowhere. From what I understand, the warden herself was not even aware this was in the works.”

It’s unclear when the plan to close the facility came about.

Tafoya Lucero did not mention it in a March 19 interview when she was asked whether she thought it should be closed. She did not directly answer the question.

Neither the Governor’s Office nor the Corrections Department specified the reason for the closure.

The Corrections Department intimated the planned shutdown of the “aging prison facility” was due in part to the expense associated with maintaining the campus-style facility. The department’s statement said it was first opened in 1909, and many of the current structures were built in 1960.

The prison has been chronically understaffed since about half the state’s then-700-plus female inmates were moved there in October 2016.

At least a dozen women have filed lawsuits alleging they were sexually harassed, assaulted or raped by guards and then ignored or retaliated against when they reported the abuse to higher-ups who knew about it but did nothing.

The state Risk Management Division paid $75,000 to settle a complaint by one inmate in January and has hired a team of lawyers to defend against the majority of the cases that are still pending.

A former guard at the facility recently was charged with raping two inmates at the prison.

“The governor is of course aware of and deeply concerned by the history of this facility,” spokeswoman Nora Meyers Sackett wrote in an email Friday.

“It’s an unacceptable pattern. This administration has an unequivocal zero-tolerance policy for sexual assault,” she wrote, adding that might not have been the case under the previous administration.

Sackett did not say why or when the prison will be closed or where the 200 to 300 women currently incarcerated there will be moved, and she did not respond to follow-up questions seeking that information Friday.

Corrections Department spokesman Eric Harrison did not respond to questions regarding the current population of the facility, which Tafoya Lucero had said was recently reduced by about 130 inmates and had dropped to below 50 percent of its capacity of about 424 inmates at various points in recent years.

Civil rights advocates and prisoner representatives who have called for closure of the prison based on the mounting claims of sexual assault, understaffing and poor living conditions welcomed news of the closure Friday.

“It’s about time,” said Kate Loewe, an Albuquerque civil rights attorney. She regularly communicates with inmates as one of the prisoner representatives on the Duran Consent Decree, an agreement that settled a decades-old civil suit and forced some of the most significant penal reforms in New Mexico history.

“It’s been a dangerous place for the women not only because of the culture of sexual violence but because the buildings are very old,” Loewe said. “Just this year, women reported to me they were sleeping in dorms with holes in the roof and water coming in and that they were using port-a-potties during the coldest week of the year because the plumbing was broken. Hopefully, this is a step in the right direction for doing justice for the women that the state of New Mexico incarcerates.”

“Sending the women to Springer was a tragic mistake,” Santa Fe attorney Mark Donatelli, also a counsel on the Duran decree, said in an email Friday.

“The majority of the women are nonviolent offenders who should never have been sent to prison in the first place,” Donatelli wrote. “Most of them are mothers who prior to prison were victims of sexual abuse who became substance dependent, self-medicating the pain of their victimization. Then they were sent hundreds of miles away from the children and families where most of them could not even be visited.

“Hopefully this closure will focus attention on treating women prisoners fairly and begin necessary programs to reduce recidivism and support their families,” he added.

Lucero is a blundering incompetent who should not have been appointed. It seems the Governor just gave up after her first choice returned to Florida.

The Grisham cabinet is the worst in memory, but then, of course, the Governor is also a blundering incompetent, who was fired by Richardson from her DOH Cabinet post in 2007. Has she ever managed anything successfully??

Perhaps we should ask about management experience during the campaigns?? Too late now.. But she must NOT get another term, to complete the destruction..