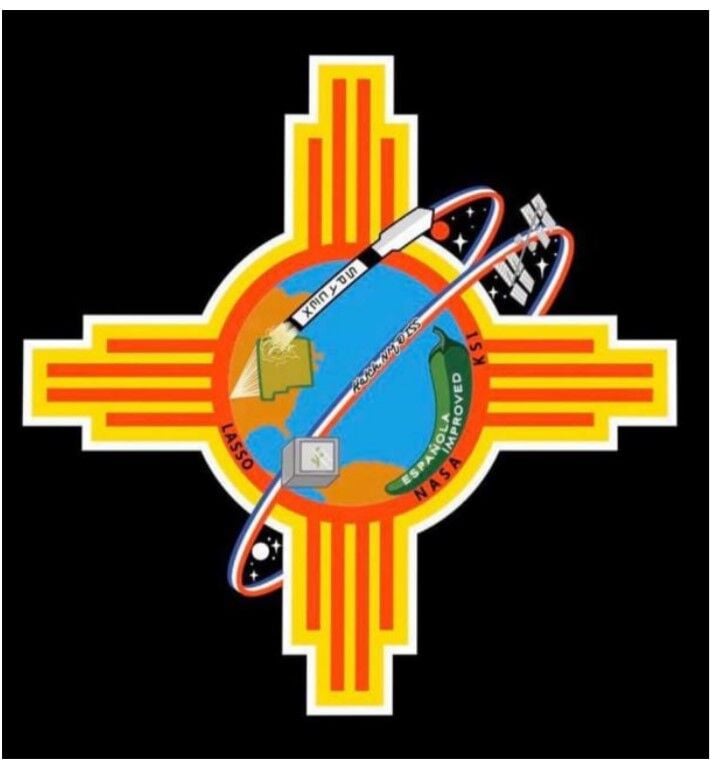 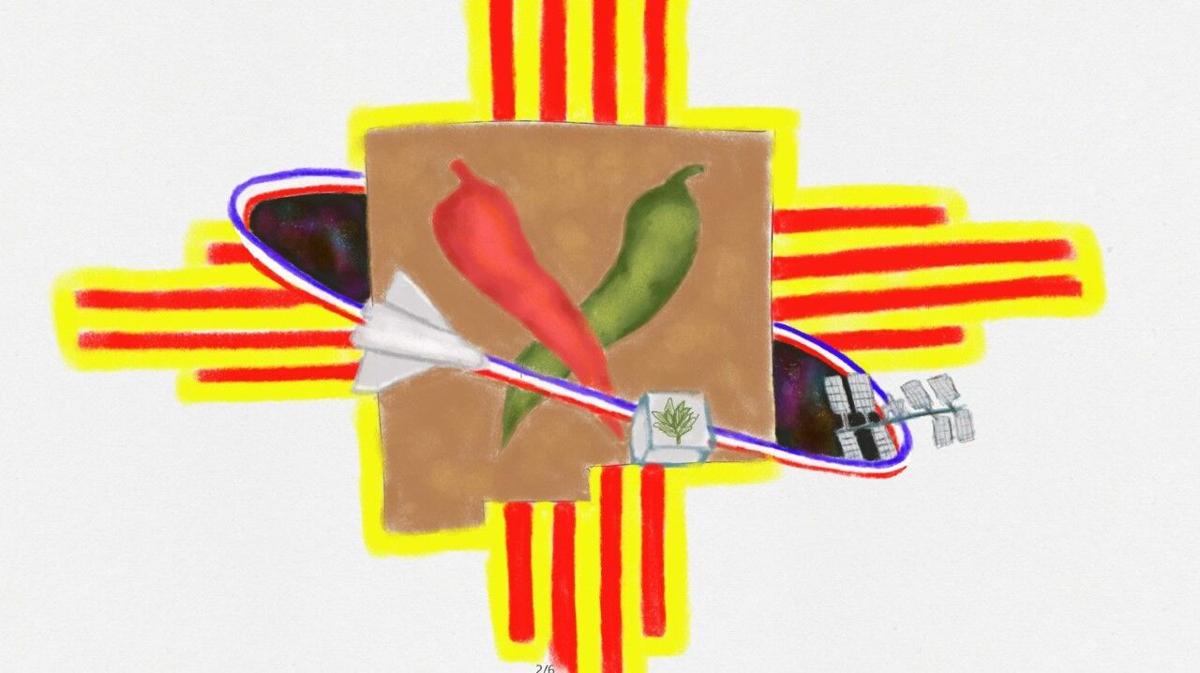 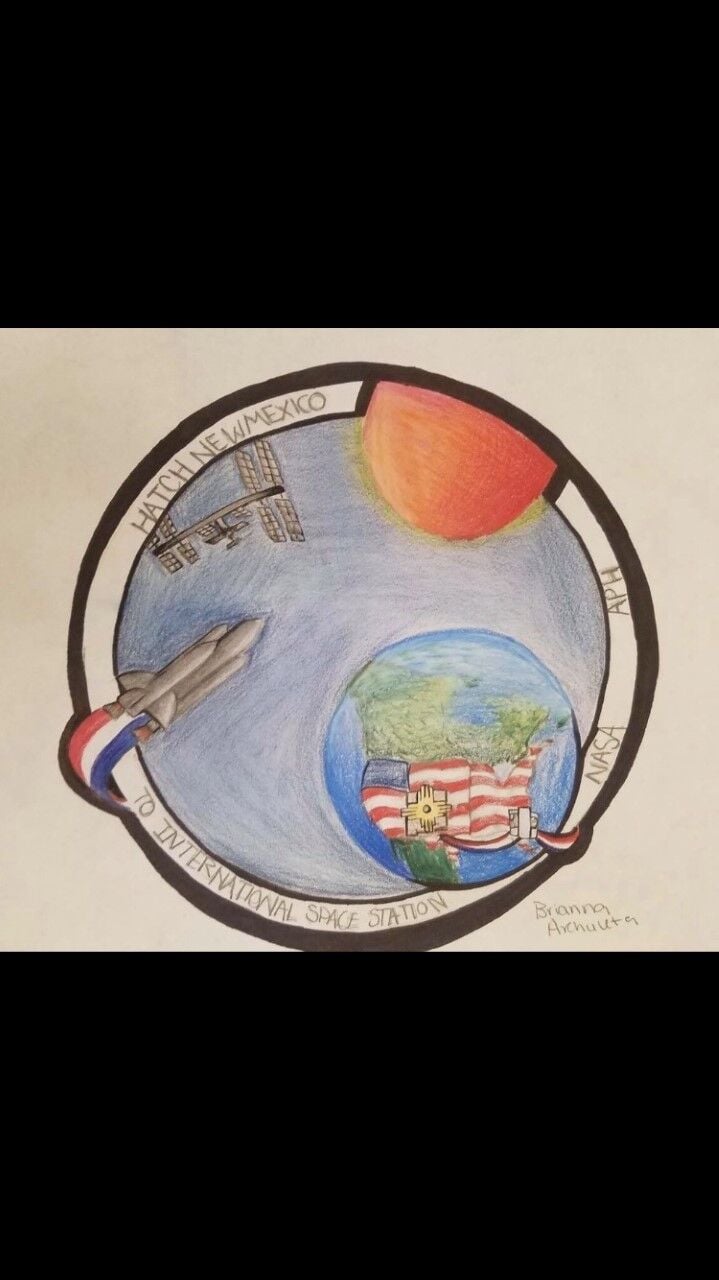 It’s a lot of pressure to make art for the entire universe. But that’s exactly what three Northern New Mexico teens are working toward.

Brianna Archuleta, Siri Aadi Khalsa and Jade Madrid are designing a mission badge that will be used for NASA’s Advanced Plant Habitat PH04 experiment — an agricultural project that aims to carry New Mexico chile to space.

Those associated with the project said giving young people the opportunity to be involved empowers not only the artists, but all of New Mexico.

“It’s not just somebody here at the lab drawing this badge of New Mexico chile, who maybe doesn’t know what it is. It’s actual people from home who know what the culture is. … In a way, those artists represent all of us,” said Española native Jacob Torres, a contracted technical and horticultural scientist for NASA who spearheaded the project.

Torres said PH04 aims to find ways to grow New Mexico’s most iconic crop without gravity while en route to Mars — a projected six-month journey, minimum — in order to reach its long-term goal: to potentially grow chile on the red planet someday. Given that the PH04 project is part of NASA’s goal to colonize Mars, his idea to involve high school students was “more about the future, the next generation,” he said.

Torres, who has worked on the PH04 mission and similar agricultural experiments at NASA since 2018, said he first started looking to partner with folks in Española last year. He credits longtime friend Ralph Martinez, a well-connected member of the community, for introducing him to Khalsa, a talented young member of the Sikh community from La Mesilla, as well as local art teacher Camilla Martin, who recruited two of her students, Madrid and Archuleta.

At the time, “we did not expect this to be any kind of big deal, to be honest,” said Martin, who teaches art to middle and high school students at McCurdy Charter School. “We started out not even knowing if this would turn into anything.”

Still, the girls couldn’t help but become excited by the prospect of creating artwork for America’s space agency.

“I was like, ‘NASA? Wow,’ ” said Madrid, a senior at McCurdy who lives in La Mesilla.

Archuleta, of Chimayó, said she was also “in shock,” as well as intimidated. “I thought, ‘Oh my God, am I going to be able to do this? Is my art good enough?’

“I never thought I’d have an opportunity like that,” she added.

Martin, Martinez, Torres (via Zoom) and locally renowned artist Toby Morfin first met in the spring to brainstorm ideas for the badge. The goal, they said, was to create a design that NASA couldn’t turn down.

Torres said NASA gave him the green light this summer for the girls to move forward with designing the badge.

Since then, the teens have made paintings, sketches and graphic designs, incorporating NASA requirements with their own creativity. They said the trickiest part is including all necessary items — NASA; red, white and blue hues; ISS for the International Space Station; APH for the Advanced Plant Habitat; Kennedy Space Center; the state of New Mexico; Española; Hatch; and, of course, chile — while ensuring the design isn’t overcrowded.

Madrid said one of her artworks is shaped like a Zia symbol with Earth in its center. Inside the Earth is a map of the U.S., with New Mexico enlarged, and circling the Earth is a spaceship with an NuMex Española Improved green chile nearby.

The group is working with NASA on a second round of revisions — one for each girl, Torres said.

Only one of the drawings will be chosen for the final round. Once NASA makes its selection, the girls will work on final revisions together so that “everyone will have their hand in the drawing in the end,” Torres said.

The teens said they’ve worked well together and have enjoyed the collaborative process.

“I definitely got a lot of inspiration from [Madrid and Archuleta] and really appreciate their feedback,” said Khalsa, a sophomore at New Mexico School for the Arts.

Learning to express their ideas to NASA scientists and receiving critical feedback has also helped the girls grow, Martin said.

“It gives them confidence. It helps them realize their strengths and talents,” she said.

Martinez, Morfin, Torres and Martin are hoping to raise funds for the girls so they can travel to see the space launch in the coming months, Martinez said.

“It would be so cool to watch the mission launch, knowing we contributed,” said Madrid, noting she used to watch spaceship launches with her great-grandmother, Ermany Toohey.

“She used to say we’d see [a launch] someday,” Madrid said. “Knowing we might actually be able to see it is breathtaking.”

An Española native is part of a team working to bring New Mexico's signature crop to outer space and, perhaps one day, Mars.