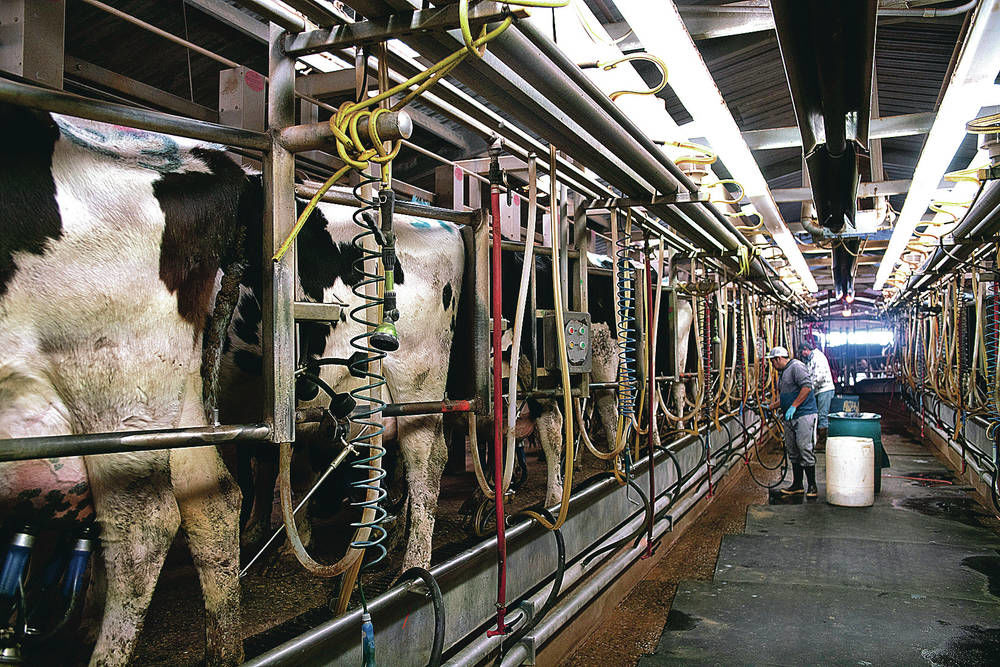 The milking facility at the Highland Dairy in Clovis. The Air Force discovered contamination at the dairy was nearly eight times the federal advisory level. Don J. Usner/Searchlight New Mexico 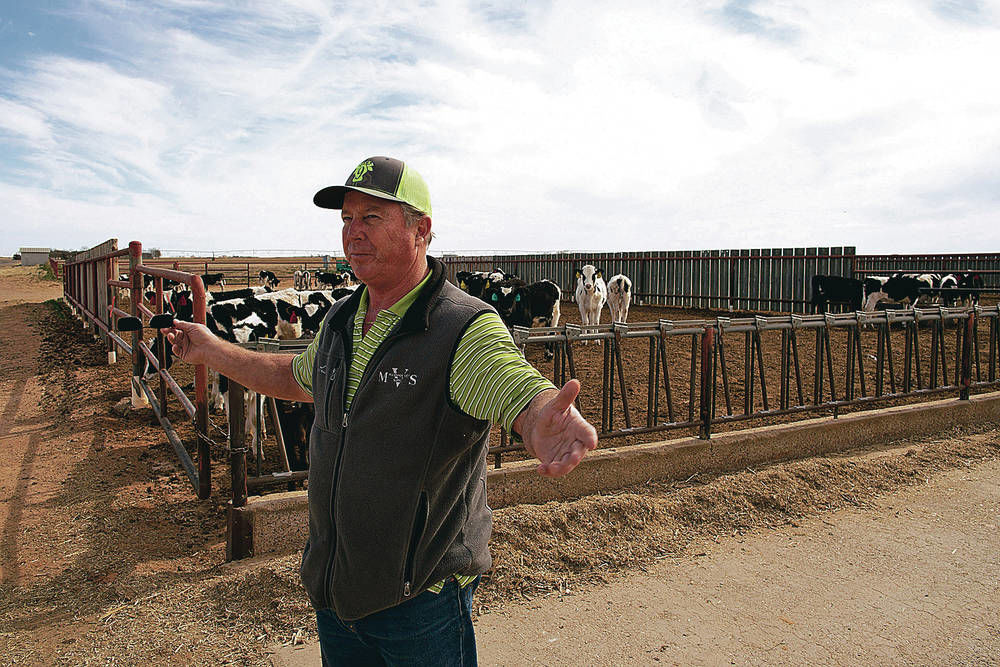 Art Schaap looks over some of the 1,800 Holstein cows at the Highland Dairy in Clovis. Don J. Usner/Searchlight New Mexico

The milking facility at the Highland Dairy in Clovis. The Air Force discovered contamination at the dairy was nearly eight times the federal advisory level. Don J. Usner/Searchlight New Mexico

Art Schaap looks over some of the 1,800 Holstein cows at the Highland Dairy in Clovis. Don J. Usner/Searchlight New Mexico

The state is suing the U.S. Air Force over widespread contamination of soil, drinking water and even milk from firefighting chemicals used on bases in Eastern and Southern New Mexico.

For decades, the Air Force and Department of Defense used firefighting foams containing the hazardous chemicals, known as per- and polyfluoroalkyl substances, or PFAS, to put out fires at the Cannon and Holloman Air Force bases.

Officials have failed to safely dispose of the toxins and stop their spread in the environment, says a lawsuit filed Tuesday in U.S. District Court by the New Mexico Attorney General’s Office and the state Environment Department.

Chemicals in the groundwater on the bases and in the surrounding areas have been detected at levels several hundred to several thousand times higher than health advisory levels set by the federal government.

New Mexico heavily relies on groundwater for household use and agricultural irrigation.

The state and Air Force have been unable to reach an agreement on how quickly to deal with the problem, he added, saying he hopes the lawsuit will “move the discussion along and get a better result.”

For at least three decades, dating back to the 1980s, the Department of Defense knew the fluorochemicals could kill aquatic life and otherwise harm the environment. And in 2011, the lawsuit says, the agency admitted the chemicals had created a “crisis,” contaminating groundwater at nearly 600 military sites nationwide.

The chemicals are readily absorbed into the body and have been linked to several types of cancer. They also have been shown to cause problems with the thyroid, immune system and other organs in lab animals over time.

The state says it was only recently notified of contamination around the New Mexico bases. In 2017, the Air Force submitted documents to the state saying it planned to sample soil and water for PFAS contamination, but state officials say they were not given data showing proof of contaminants until August.

Soon after, the lawsuit says, the state informed the Air Force it was in violation of New Mexico’s Hazardous Waste Act.

The state is now demanding the Air Force immediately address the violations and is requesting a permanent injunction ordering the military branch to come into compliance with the Hazardous Waste Act — and requiring it to pay civil penalties and to reimburse the state for its past and future work related to the chemicals.

Attorney General Hector Balderas called on Air Force Secretary Heather Wilson, a former U.S. representative for New Mexico, to “do the right thing,” saying, “no one has the right to pollute New Mexico’s vital water resources.”

A spokesman for the Air Force said the agency does not comment on pending litigation.

State and federal oversight of the chemicals has been developed in recent years.

The Environmental Protection Agency first created provisional health advisory levels for PFAS in 2009 and then updated the guidelines in 2016. Last year, the state voted to add some of the chemicals to its list of toxic pollutants under the New Mexico Water Quality Act to match the federal standard.

At Cannon Air Force Base, near Clovis and above the vast Ogallala Aquifer, PFAS have been used for more than 50 years — released during testing exercises, fires and accidental spills. These activities created at least 13 areas where the chemicals were released on the more than 3,700-acre campus, according to the lawsuit.

At a 7-acre landfill and a flight area that was the site of three plane crashes, chemicals were detected at levels up to 374 times higher than the federal health advisory standard.

The chemicals also have spread off the base, contaminating public and private water supplies, including those used by local dairies. The Air Force discovered contamination at the Highland Dairy in Clovis was nearly eight times the federal advisory level.

The dairy conducted testing as well and found chemical concentrations between 42 and 204 times the federal standard, the lawsuit says.

Searchlight New Mexico reported last month that the owner of the Highland Dairy was forced to dump 15,000 gallons of milk each day because of PFAS contamination.

At Holloman Air Force Base near Alamogordo at least five areas have been identified where the chemicals were released. Officials have detected concentrations of the substances at more than 4,000 times the federal health advisory level at three groundwater sampling sites.

The state environment and health departments are now conducting additional sampling at the Holloman and Cannon bases to better understand the scope of the problem and to ensure military personnel and members of the public are not drinking contaminated water.

Kenney, the Environment Secretary, said preliminary sampling for the chemicals at Kirtland Air Force Base has not indicated a problem, but the state is examining other places in New Mexico where firefighting foams might have been used.

“If we need to turn over rocks and do forensic analysis and figure out what the liability and risk is,” Kenney said, “that does not intimidate me.”