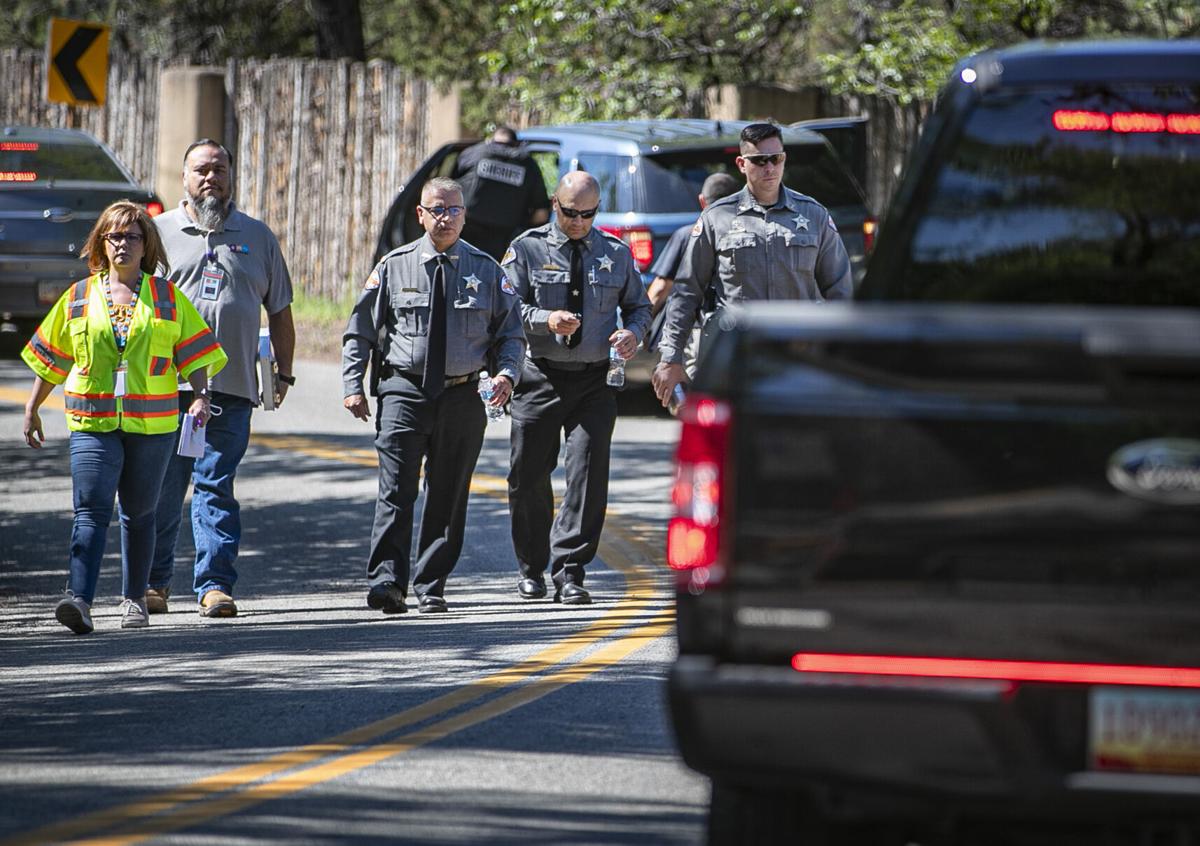 New Mexico State Police is investigating Wednesday morning’s fatal shooting off Bishops Lodge Road in Tesuque involving the Santa Fe County Sheriff’s Office. A state police spokesman said a suspect was killed in the incident at No. 1 Entrada Capulin, but no deputies were injured. 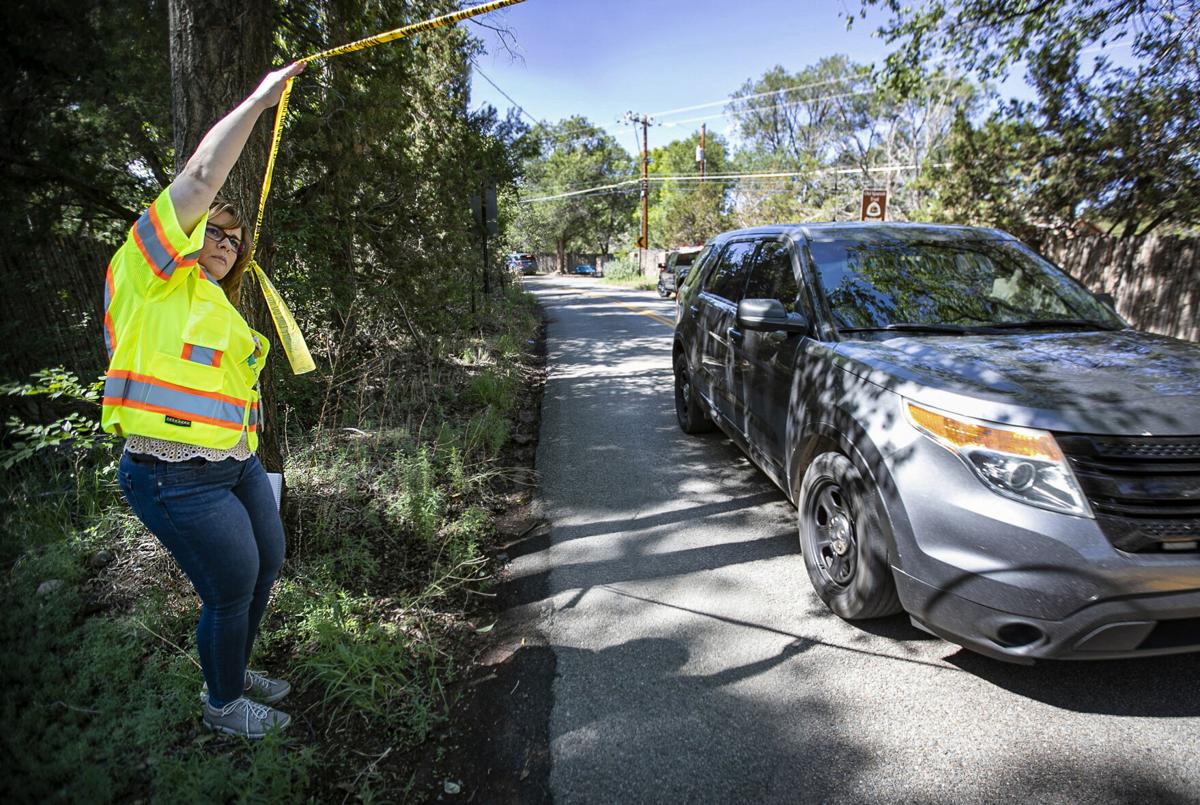 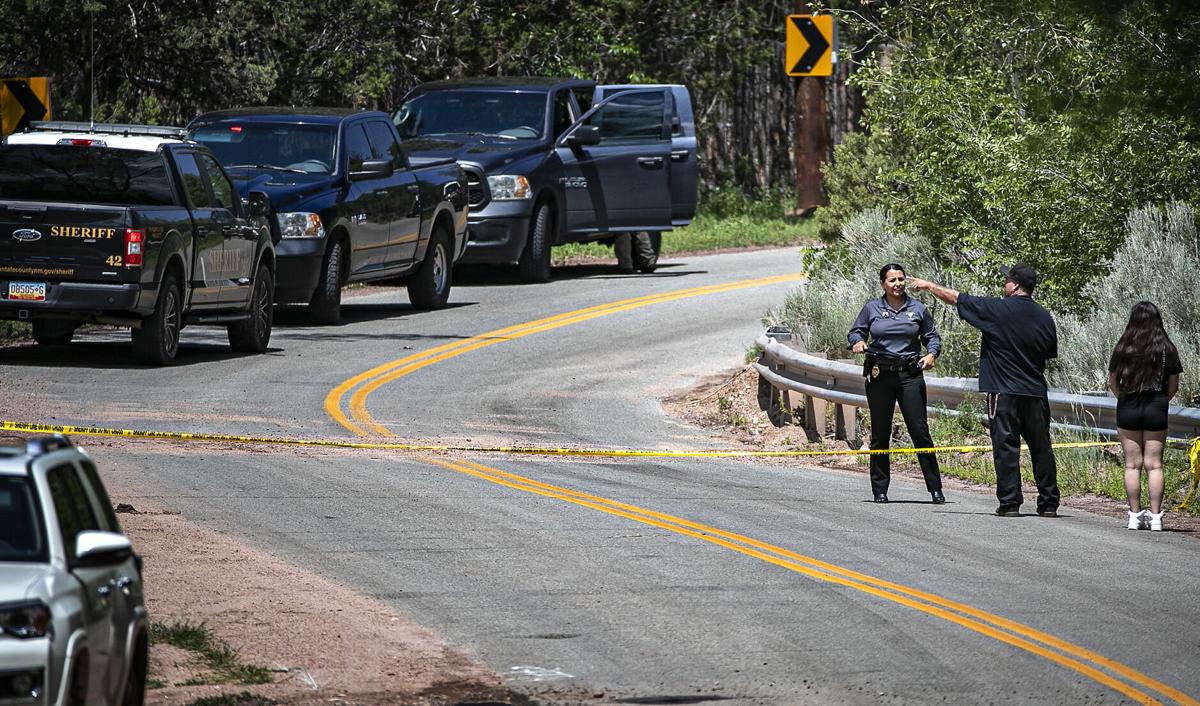 Local residents Eric Romero and Allie Romero talk with a New Mexico State Police investigator July 7 near the scene of the fatal shooting in Tesuque.

New Mexico State Police is investigating Wednesday morning’s fatal shooting off Bishops Lodge Road in Tesuque involving the Santa Fe County Sheriff’s Office. A state police spokesman said a suspect was killed in the incident at No. 1 Entrada Capulin, but no deputies were injured.

Local residents Eric Romero and Allie Romero talk with a New Mexico State Police investigator July 7 near the scene of the fatal shooting in Tesuque.

It is the fourth shooting in Santa Fe involving law enforcement in the past two weeks — and the third that turned deadly.

Officer Dusty Francisco, a state police spokesman, confirmed a suspect was killed in the incident at No. 1 Entrada Capulin and said no deputies were injured.

More information about the incident would be released as it became available, Francisco said shortly after the shooting.

By late Wednesday, however, the agency had provided no information, including what had prompted deputies to respond to the Tesuque home; the identity of the slain suspect and the officers involved; what crime the person was suspected of committing; or even whether a deputy had fired the fatal shot.

Bishops Lodge Road was closed throughout most of the day as officers investigated.

Neighbors, who declined to give their names, said they heard screaming and then gunshots as they were having breakfast outdoors at their home around 8 a.m.

“I was outside on my porch and saw police cars fly by, then I heard two gunshots,” one woman said.

Around 7:30 p.m., a blue Chevrolet truck was towed from the edge of the driveway of the residence — a modest adobe-style home with a wire fence that stands on the corner of the street.

A bouquet of flowers was laid at the foot of a tree outside the fence.

Officers walked to and from the back of the home while others wrapped up crime scene tape near the driveway.

While details have emerged in two of the incidents, the agency so far has refused to release information in another fatality involving the sheriff’s office and has failed to provide a reason for withholding it.

Santa Fe County sheriff’s deputies killed a man late at night June 23 at Siler Road and Rufina Court after he brandished a gun. The man was suspected of driving a stolen truck and led deputies on two separate chases that day, according to state police.

Amid the second chase, the man got out of the stolen truck on Siler Road and pointed a gun at deputies, state police said. They fired back several times, striking him and riddling the truck with bullet holes.

The man’s body lay for hours on the road as state police investigated.

The agency has not released the man’s name or the names of the deputies involved in his death.

“Investigation into this incident is active and ongoing,” Francisco wrote in an email late Wednesday. “As soon as investigators provide us with updated information on the incident and the deceased suspect, we will send it out via press release.”

The comment is one the agency has repeated multiple times since the shooting.

Francisco did not respond to a request for an explanation on why the man’s name has not been released.

Asked to provide the deputies’ names, Francisco wrote, “Identities of officers involved are not released until after interviews have been conducted.”

Lino-Gutierrez was a suspect in a shooting that morning at nearby De Vargas Park. He led officers on a foot chase through the downtown area and then pointed a gun at them before he was shot, state police said.

A woman also suspected in the De Vargas Park shooting, which left a woman with a neck wound, faces a charge of attempted murder and other counts.

Kalin Addison, 20, told officers she hadn’t meant to pull the trigger and had been drinking and using methamphetamine that day, according to a criminal complaint.

On Sunday, state police officers shot and injured 40-year-old Jaime Bravo in a neighborhood on the city’s south side.

A criminal complaint said a Santa Fe police officer responded to a request for a welfare check on a man sitting on railroad tracks near the N.M. 599 exit of Interstate 25 and encountered Bravo, who pointed a gun at the officer and then fled.

State police were called in to assist and found Bravo nearby.

Bravo began to flee again and fired at least one shot toward state police officers, who returned fire and struck him, the criminal complaint said.

He was taken to a hospital for treatment and now faces three counts of aggravated assault on a peace officer and two counts of evading an officer.

Having only lived here 2 years, I do not understand why the Santa Fe New Mexican fails to provide any investigation or follow up to what they report. I thought that was part of journalism. I get much more information on new like this from the Santa Fe Reporter , Associated Press or the Albuquerque news media.

I will add that I had not seen the other articles about the recent shooting that were more informative..

Meanwhile in other cities, two ATF agents were shot, and a FBI agent was fatally shot. Again: "America's" bullets have come home to roost.

The Summer of Lead (c)

Sure does seem that way. Or as Yeats said, "things fall apart. the center cannot hold"

Still, Mr. Spencer, be not deceived: "For the rod of the wicked shall not rest upon the lot of the righteous; lest the righteous put forth their hands unto inequity." King David, faithful servant of Almighty Yahweh

Part of an interview between Jose Yglesias and Dr. Martin Luther King:

"...There he (King) continued with a discussion of the parable of the rich man and the beggar Lazarus. Lazarus had not gone to heaven simply because he was poor, King argued, nor was the rich man to h e l l because he was rich. “No, the rich man was punished because he passed Lazarus every day and did not see him … and I tell you if this country does not see its poor — if it lets them remain in their poverty and misery — it will surely go to h e l l!”'

The Journal offers this tidbit: "The latest shooting occurred after Santa Fe County Sheriff’s Office deputies were dispatched to a reported stabbing at 1 Entrada Capulin."

I highly recommend that you never shoot at Police officers.

Maybe that explains all the Santa Fe law enforcement and emergency services vehicles I saw flying down 84/285 with all their lights flashing this morning. Here we go again...

Any odds dead guy was not first time offender? Out while awaiting sentencing on other felony?

Is that a rhetorical question, Mark?

It will be interesting to find out the background on this individual. As Mark says, odds are its not the first time the deceased crossed paths with the criminal justice system.

Margaret, there are 3 ne'er-do-well's for sure who are no longer roaming the streets endangering the citizenry.

Tell me again, Khal, that it is 'not worth a serious reply' to note a competition between the Sheriff's office and other agencies for notches on their guns.

Ok, I will. Its not worth a serious reply.

I'm sure we can catalog past wrongful use of deadly and less than lethal force in Santa Fe city and county, but suggesting that there is some sort of competition to see which agency can kill the most people is pretty offensive. If you can document that as a fact, be my guest. Otherwise, I would suggest such comments are not productive and highly offensive. Not everything we think should be stated.

Given Santa Fe's political nature, and I've worked with several of the sitting city councilors as a member of the BTAC and as an ordinary but ornery public citizen and emailed back and forth with the Mayor, I seriously doubt such an attitude would be either countenanced or given a blind eye. If anyone has data to the contrary, we should ensure it is published in this newspaper.

If you want bad cops, and there are some, one can look at folks like former APD Detective Byron "human waste disposal" Economidy or the way APD handled the James Boyd crisis. Certainly lousy training is a problem as is the "warrior cop" mentality, egged on by bad training and Federal passthrough programs for military gear. To analogize from Abraham Maslow, if all you are trained on is a firearm, everything looks like a target. I did contact the State at one point to volunteer to be the citizen on the oversight board for the Police Academy. As you can guess, I got crickets in response.

Police shootings need to be dissected one at a time. When people are shooting at the cops, the cops get to shoot back.

Anyway, there is your serious reply, Mr. Cook. I hope you are having a nice day (seriously).

Not to single out Economidy, who also had also recieved numerous distinguishing awards during his tenure at APD. But he was written up here, along with the Boyd incident.

Mr. Cook...so, you appear to be convinced that police officers purposefully enter into competitions to see how many can be killed on a daily basis and proudly display their kill totals on their guns.

What a sad, hateful, miserable. arrogant and ignorant person you are.