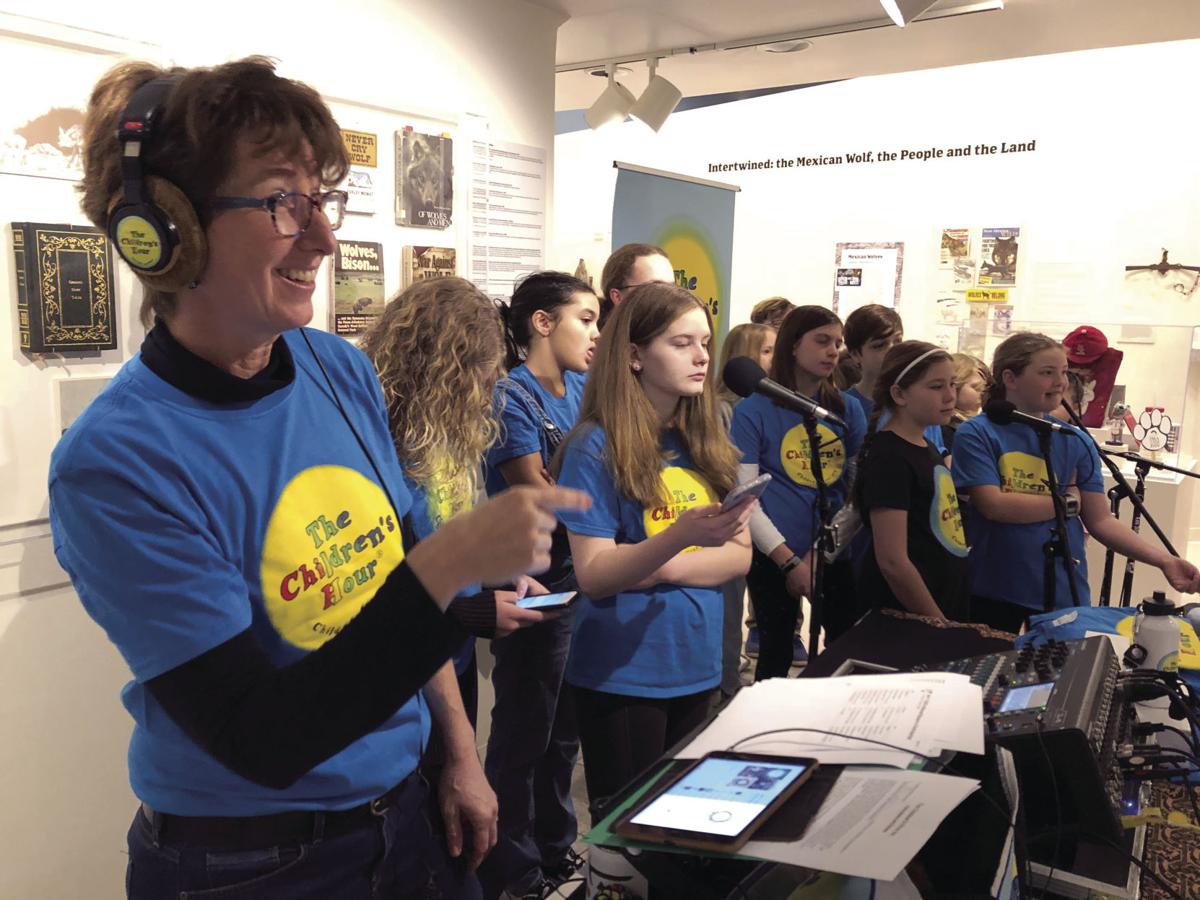 Katie Stone, left, executive director of the weekly radio program The Children’s Hour, reacts to an audience member during a taping of the show at the Maxwell Museum of Anthropology in Albuquerque. 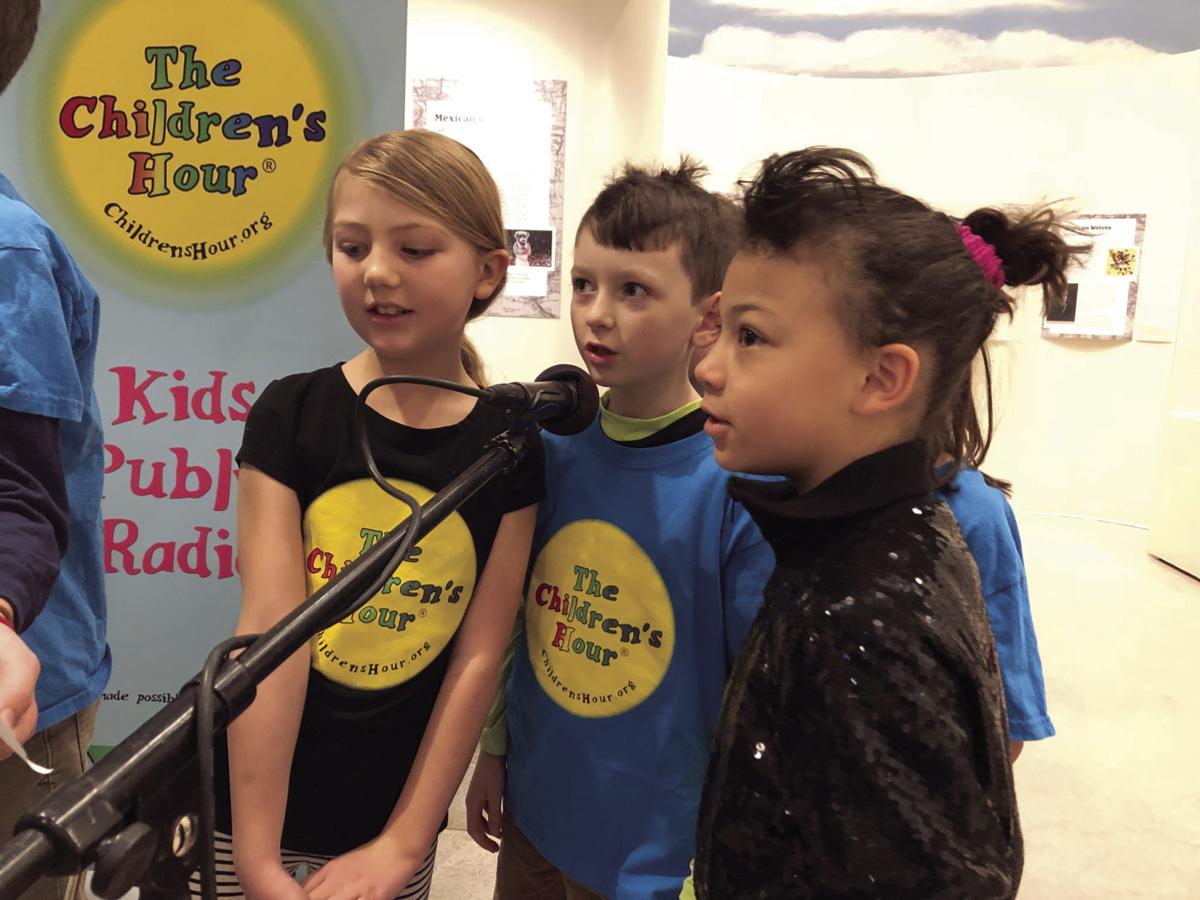 Maya Malone, from left, Evan Daitz and Lily Mae Williams, each 8, take part in a recent live taping of the weekly radio program The Children’s Hour in Albuquerque.

Katie Stone, left, executive director of the weekly radio program The Children’s Hour, reacts to an audience member during a taping of the show at the Maxwell Museum of Anthropology in Albuquerque.

Maya Malone, from left, Evan Daitz and Lily Mae Williams, each 8, take part in a recent live taping of the weekly radio program The Children’s Hour in Albuquerque.

Gearing up to take part in a taping of a recent show at the Maxwell Museum of Anthropology at the University of New Mexico, she said the program is like a never-ending birthday club where kids can act as adults and adults can be entertained by kids.

“It’s more than music or fairy tales or other kids’ shows,” she said. “It’s like magic.”

The magic has been airing Saturday mornings for 18 years on KUNM, which initially produced it. Last year, the show’s executive director, Katie Stone, decided to start a nonprofit to independently produce the program.

She’s looking for money to pay staff and contract engineers, who have volunteered for years, and she has an ally in that quest in Rep. Deborah Armstrong, D-Albuquerque. Armstrong introduced House Bill 40 in the 2020 legislative session to request $50,000 to “give a little support as they are expanding with upgrades in equipment and staff,” Armstrong said in a phone interview.

Armstrong said she loves The Children’s Hour because it “engages children in actually putting it together and being part of the crew. And it’s important to engage kids everywhere we can educationally, supporting them not just in schools but with programs like this.”

The program airs on 54 stations in 24 states, Stone said. The show’s 2019 budget was $65,000. That amount will double in 2020 as the program expands its production team, contracts out for marketing and syndication purposes and — for the first time — pay Stone a salary as executive director.

About half the shows are taped at Sunspot Solar Studio in Albuquerque. The other half are produced in different locales.

The Maxwell Museum show was set against a backdrop of museum items and exhibits about wolves, Neanderthals and other anthropology-related material.

It was a good showcase for what Stone and the kids do. Before each show, they line up an array of speakers connected to that day’s theme or site and prepare a program around them, finding room for the kids to ask questions and engage in comedic banter.

“What do you call a caveman who wanders around aimlessly?” Story-Newell asked her crew of some 15 children near the start of the show.

“A Meanderthal!” the kids responded in unison, leading to audience and kid laughter.

In between caveman cutting-up, Stone and the children, who range in age from about 5 to 15, peppered their on-air guests — museum directors, curators and experts — with questions about anthropology and early man and woman.

Stone said the program becomes an on-air class that ties listeners to the culture and history of New Mexico.

Even the shy kids in the group joined in the conversation. Taping in front of an audience of 40 or so people that morning, the kids’ “anything goes” approach was infectious.

Stone said the program teaches children how to conduct interviews, how to be confident in front of an audience and other life skills that may pay off in their social development.

“We can become anything we want — astronauts, anthropologists, actors.” said Lucas Griego, 10, who joined the show six months ago. “And we get to meet those people every week.”

Eliot Patton, a 14-year-old girl who listened to the show for years before joining the crew, said the show puts kids first.

“Everybody deserves to have a voice that represents them and their background,” she said, “and The Children’s Hour brings that for kids of all ages.”