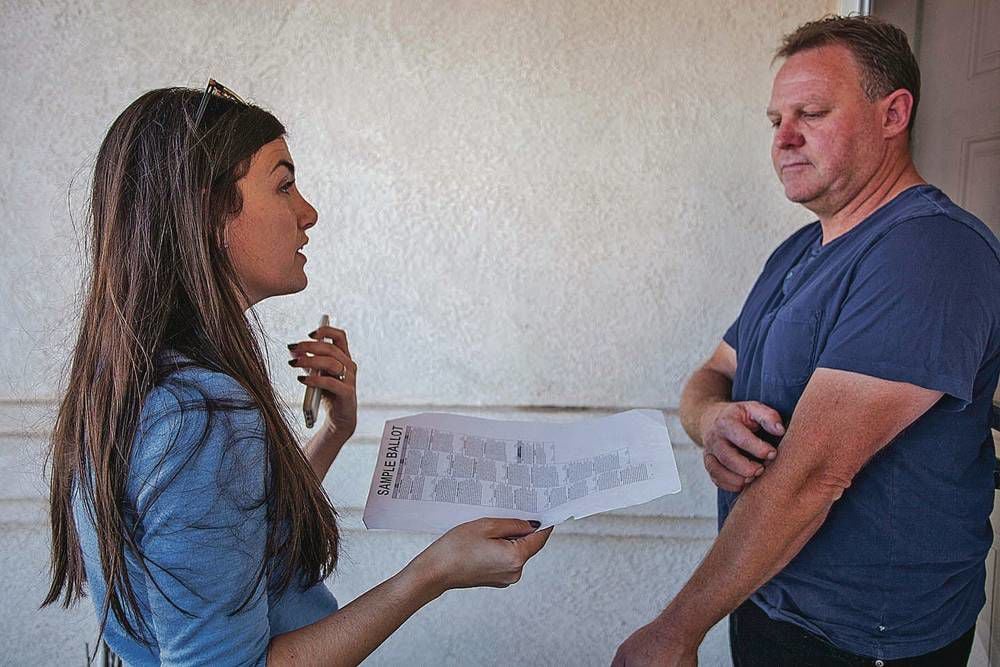 Day Hochman-Vigil, a Democratic candidate for the state House of Representatives, speaks to a voter while canvassing near her home Saturday morning in District 15 on Albuquerque’s north side. The open seat is being vacated by a Republican. Juan Antonio Labreche/For The New Mexican 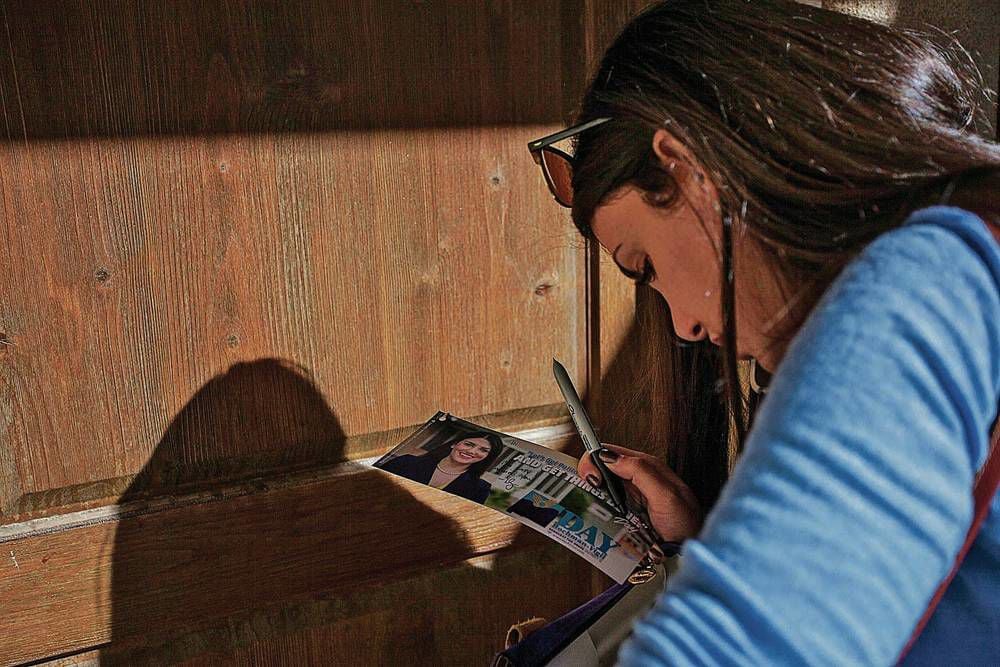 Day Hochman-Vigil, a Democratic candidate for the state House of Representatives, leaves campaign literature while canvassing in District 15 on Albuquerque’s north side Saturday morning. Juan Antonio Labreche/For The New Mexican 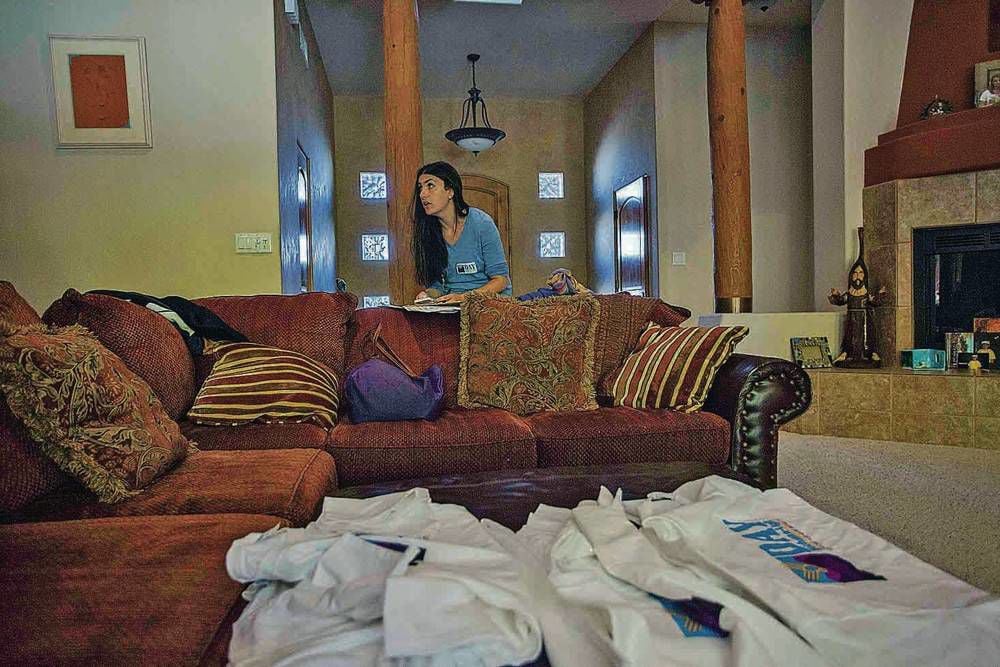 Day Hochman-Vigil, a Democratic candidate for the state House of Representatives, prepares at her home to canvass in District 15 on Albuquerque’s north side Saturday morning. Juan Antonio Labreche/For The New Mexican 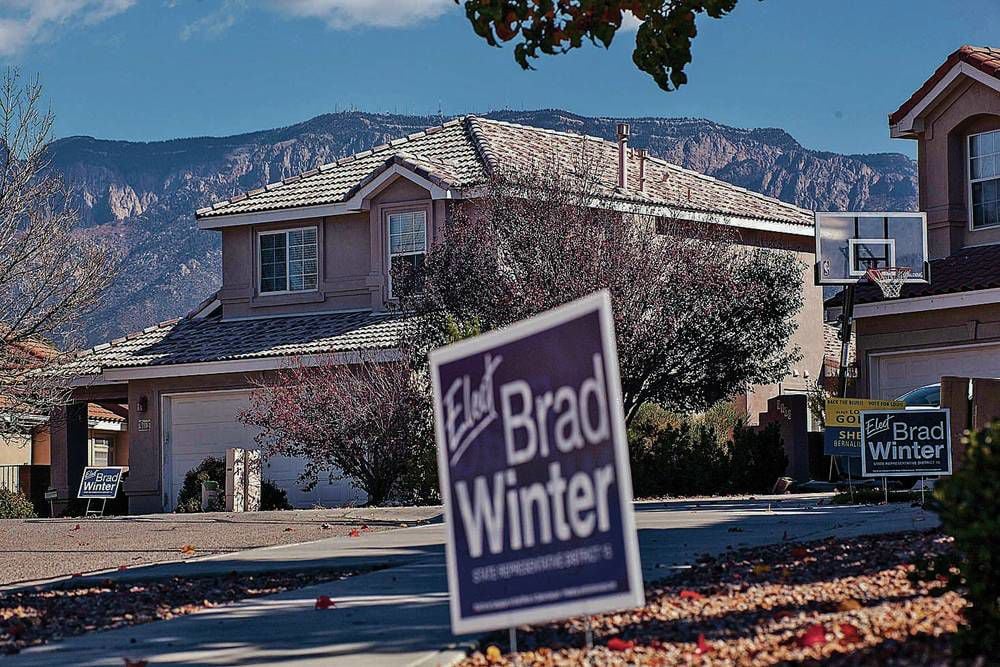 Day Hochman-Vigil, a Democratic candidate for the state House of Representatives, speaks to a voter while canvassing near her home Saturday morning in District 15 on Albuquerque’s north side. The open seat is being vacated by a Republican. Juan Antonio Labreche/For The New Mexican

Day Hochman-Vigil, a Democratic candidate for the state House of Representatives, leaves campaign literature while canvassing in District 15 on Albuquerque’s north side Saturday morning. Juan Antonio Labreche/For The New Mexican

Day Hochman-Vigil, a Democratic candidate for the state House of Representatives, prepares at her home to canvass in District 15 on Albuquerque’s north side Saturday morning. Juan Antonio Labreche/For The New Mexican

ALBUQUERQUE — There’s a war room of sorts on a cul-de-sac at the northern edge of Albuquerque.

On a recent afternoon, a half-dozen volunteers sat around with a map splayed over a dining table, dialing voters across her state House of Representatives district.

“What am I going to do — write Donald Trump a letter?” said Jeremy Sment, who has been crunching numbers for Hochman-Vigil’s campaign, working on a laser-precision, get-out-the-vote effort to flip this legislative seat from Republican to Democrat.

For Sment, this hyperlocal race on Albuquerque’s north side is the culmination of having become more involved in politics after Trump’s election in 2016 and after Gov. Susana Martinez’s gutting of much of the state budget in 2017.

The best place to focus, it seemed, was on the local level, ousting GOP lawmakers in swing districts around a city that has proven increasingly Democratic in recent years.

If Hochman-Vigil wins, the district would represent part of a shifting political landscape in New Mexico, with voters in the state’s biggest city electing Democratic candidates in areas where they have often struggled.

But a few hundred miles away in a district that stretches from Anton Chico to Santa Rosa, Vaughn and to Clovis, Democrats are on the defensive.

Incumbent Democratic state Rep. George Dodge is being challenged by another first-time candidate, Martin Zamora. Zamora’s campaign could not be more different from Hochman-Vigil’s. Canvassing is harder when voters are spread across ranches and rural hamlets in five counties. And the issues Zamora describes — infrastructure, water, a debate over building a new racino — are all far removed from presidential politics.

But with Zamora arguing the Democratic incumbent has not done enough for the eastern end of his district and given that Trump won the area two years ago, this may be one the best chances for Republicans to pick up a seat in the Legislature.

Races for the state House of Representatives can be the weather stations of New Mexico politics — detecting the shifting winds of opinion and changes in public pressure before a storm arrives in Santa Fe. And in these districts, the electoral weather conditions on Tuesday are worth watching as Democrats seek to expand their 38-32 majority in the chamber.

On one end, Albuquerque is turning a brighter shade of blue, with once reliably Republican districts turning into battlegrounds.

At the same time, Democrats may struggle to hang on to conservative quarters of the state.

Far more voters in the district are registered as Democrats than as Republicans. Dodge has been relatively moderate, and even earned high marks from the National Rifle Association. The district hasn’t seen a competitive race since 2012, when Dodge, who lives in Santa Rosa, clinched a second term. But there was a presidential election, too. Barack Obama was on the ballot. Just two years ago, Trump won the district by several hundred votes. And most of the voters are in the eastern end, where Zamora lives.

Republicans evidently see an opportunity where the old-school Democratic stronghold in the rolling hills of Guadalupe County gives way to the more conservative plains of Curry County. Zamora already has raised more than $100,000, about twice as much money as the Republican who ran in 2012. Meanwhile, Dodge reported spending about $120,000 through the end of last month, making his one of the most expensive state House campaigns of the season.

But if Democrats in Albuquerque are counting at least in part on frustration with the president to help drive their candidates to victory, Zamora, a farmer and rancher who has lived near Clovis his whole life, is not counting on Trump’s sway to win on Tuesday.

“I am asking people to vote for me,” he said. “I am not pushing a party ticket.”

To be sure, Zamora is running as a conservative. He is opposed to abortion and gun control. If he can win, it will make this district a battleground and show more voters here are willing to look past party and buck incumbents.

In some ways, this is a race made for a Republican like Winter. The district is a decent specimen of gerrymandering, stretching from old neighborhoods along the Rio Grande up into tony Los Ranchos de Albuquerque, and then over to the newer, affluent sprawl of the Far Northeast Heights.

In past years, the district swung from Democrat to Republican. But Maestas Barnes was also a relatively moderate member of the GOP caucus. And in 2016, it went for Hillary Clinton, albeit with a sizable share of votes going to Libertarian Gary Johnson.

These are exactly the neighborhoods where Republicans expect to struggle nationally — well-educated, relatively affluent areas where railing against immigrants and opposing gun control does not play well.

Several other districts here saw the same trend. A few miles away, House Republican Leader Nate Gentry is forgoing re-election, too, giving rise to a competitive race in his nearby district, which also went for Clinton. And Republican state Rep. Jimmie Hall faces an attention-grabbing, well-funded challenge from Democrat Melanie Stansbury in his district, which also went for Clinton.

And all of this comes just a year after the city elected a Democratic mayor.

For her part, Hochman-Vigil is not counting on national politics to carry her to victory, either.

Walking a neighborhood of spacious homes, she makes her pitch to one resident without ever mentioning she’s a Democrat. The conversation centers on crime and she notes Winter has been on the city council for years.

In the end, the race is likely to come down to a combination of factors — whether voters are averse to familiar political names; whether they want to take out anger with the president on down-ballot candidates; and whether they want newer faces in state politics.

But with polls showing decisive leads in some of the more prominent statewide races, this state House contest may reveal better than most results Tuesday which way some very different parts of New Mexico are leaning.

“In my biased opinion,” Hochman-Vigil said, “this is the race to watch.”