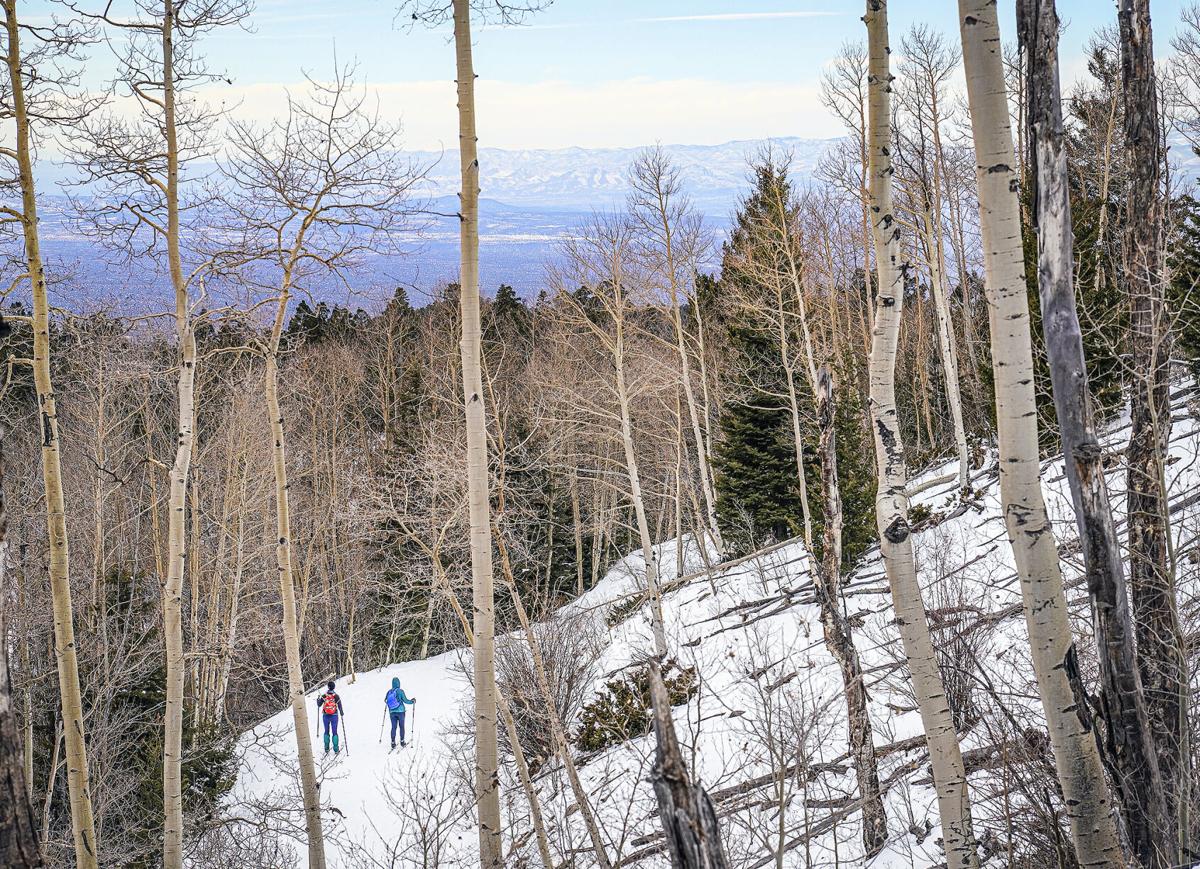 Two cross-country skiers travel through aspen trees down the trail at Aspen Vista. These wooded areas in Santa Fe National Forest are considered high risk in the coming fire season. 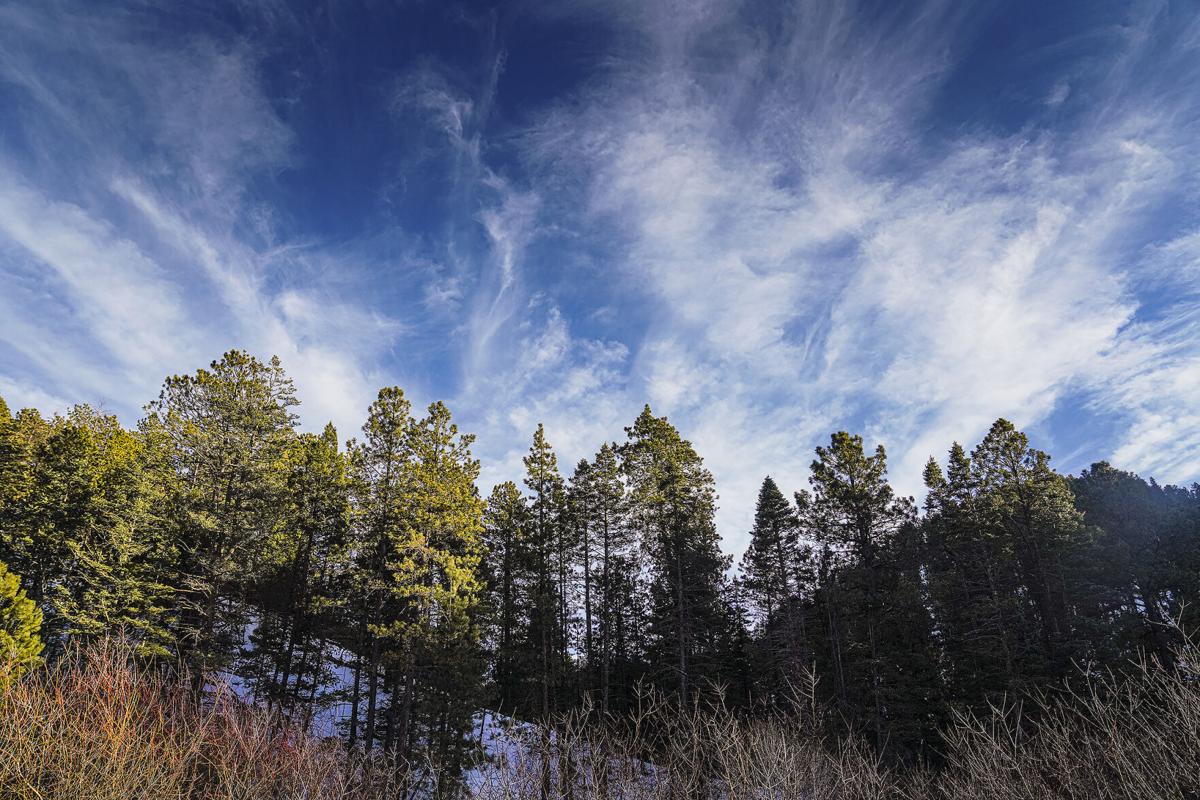 Tall trees line Hyde Park Road in Santa Fe National Forest. Due to the similar height of trees and other contributing factors, this area is considered high risk during the fire season.

Two cross-country skiers travel through aspen trees down the trail at Aspen Vista. These wooded areas in Santa Fe National Forest are considered high risk in the coming fire season.

Tall trees line Hyde Park Road in Santa Fe National Forest. Due to the similar height of trees and other contributing factors, this area is considered high risk during the fire season.

However, the changes, at least for now, won’t be drastic.

The U.S. Forest Service will stick with what it considers proven methods to curb wildfire risks, such as thinning trees, lighting controlled burns and imposing temporary restrictions on campfires when conditions are too dry.

But the agency doesn’t plan to increase its hiring or training of personnel, even though it’s likely crews will be deployed more often, including to assist other states in battling blazes as they did last year, officials say.

The agency, however, is stepping up efforts to ensure homeowners who live near forests are better prepared for wildfires.

And as wildfires threaten to grow in frequency and severity, Los Alamos National Laboratory researchers are devising new computer models to better predict how fires might ignite and spread, based on weather, landscape, debris buildup and even how similar in size the trees are.

Heightened wildfire risks in New Mexico have already begun due to drought conditions in 2020 and probably will last through the year, said Julie Anne Overton, spokeswoman for Santa Fe National Forest.

Plus, this is a La Niña year, Overton said, referring to an ocean cooling event that reduces evaporation and leads to even drier conditions in the Southwest.

This winter has been the driest in recent memory, and it’s quite possible this could become more the norm, Overton said.

“The trend does seem to be going in that direction,” Overton said. “I think more people are anticipating longer and more extreme fire seasons into the future.”

The U.S. Forest Service will keep the same staffing as last year and continue partnering with other federal agencies in maintaining and protecting forests in ongoing drought conditions, agency spokeswoman Punky Moore wrote in an email.

Removing flammable forest debris, vegetation and some trees, both with equipment and prescribed burns, remains the best way to curb wildfires, Moore wrote.

Excessive debris — or fuels — on the ground can cause a fire to spread to trees and ignite “crown” or canopy fires that burn hotter and faster, inflicting more damage on the ecosystem, Moore wrote.

“That’s why it is so important to continue thinning and conducting prescribed fires to reduce excessive vegetation buildup on the landscape,” Moore wrote, especially in these extra dry conditions.

At the same time, it’s important that people living near forests prepare for the dangers, which include being ready to evacuate and building “defensible spaces” around their homes, forest officials say.

Many neighborhoods have been developed next to wild lands, Overton said, noting that some of these communities have only one way for residents to get in and out.

“A wildfire in their area could be very devastating,” Overton said. “As conditions get drier and wildfires do seem to [be] getting a little more extreme, people need to be aware of the risks and what they can do to mitigate those risks.”

Moore referred to a diagram showing how people whose communities abut forests can better safeguard their homes against wildfires.

Some preventive steps are basic, such as removing leaves and other flammable debris from roofs and yards.

Other tips include spacing trees at least 18 feet apart and removing vegetation and swaths of grass at the property’s edge to create a fire break.

“We need to have roofs that are fire resistant. We need to have fire-resistant landscaping,” said Matthew Koehler, spokesman for WildEarth Guardians. “The home and its immediate surroundings is what matters most.”

The government should make grant money available to people who can’t afford to make these improvements, Koehler said.

“We certainly don’t believe we can log our way out of the climate crisis,” Koehler said.

Meanwhile, Los Alamos lab scientists are developing simulations that predict fire behavior based on a complex array of factors.

Knowing more precisely how fire will react to the environment and weather will aid crews both in extinguishing wildfires and preventing prescribed burns from getting out of control, said Adam Atchley, research scientist at Los Alamos lab.

For instance, fires will spread faster in forests with similar-sized trees and clearings because the wind, which fans the flames, can gust more freely in these settings, Atchley said.

Trees of similar height form a fairly even plane that winds can blow over unobstructed, in contrast to trees of differing heights that would impede winds, Atchley said.

Atchley said he didn’t know how much of New Mexico’s forests have clearings and similar-sized trees that make them more susceptible to fire.

“While it is true that historical logging in the Southwest did remove some of the larger trees in the forests, what’s important to know is that through current proper timber management we are starting to see the uneven stand structure we need,” Moore wrote in an email.

The lab team is developing two programs. One is an elaborate, physics-based simulator called Firetech, which runs on supercomputers and is geared more for probing myriad variables in wildfire behavior.

The other, Quic-fire, is a streamlined version that fire managers could use to get a handle on how a fire will spread in a section of forest, given the level of moisture, wind, fuel buildup, tree size and gaps between stands.

Atchley said this fire modeling has much more detail and depth than programs currently used, making it more precise. It’s not known when Quic-fire will be made available to agencies, he said, adding the lab is working to distribute it as soon as possible.

Pinning down the influence of winds is crucial, both in deciding whether a prescribed burn is too risky and enabling crews to stay ahead of a wildfire, Atchley said.

“Winds are a very important factor — it’s also a chaotic factor,” Atchley said. “It’s one of the biggest drivers in fire spread.”

The Forest Service, which is partnering with the lab in developing the program, said it welcomes new technology that helps prevent devastating fires.

“As computer programs evolve to handle more data and process speeds increase,” Moore wrote, “the use of computer programs to monitor weather, fire spread, and fuel loading may assist with developing strategies by fire managers to make quicker, sound decisions.”

Koehler said while adaptive measures are necessary in response to wildfires becoming a year-round threat, state and federal agencies must aggressively tackle the root cause: climate change.

Research shows that the weather conditions that fueled last year’s severe wildfires — such as hot, dry weather and high winds — are linked to a warming climate, Koehler said.

Greenhouse gases, including from the fossil fuel industry, must be curbed as a long-term solution to ending year-round wildfire hazards, he said.

“The federal government’s continued insistence until this week to keep on drilling for oil and gas and mining for coal has exacerbated the climate crisis and really put us in the position where we are today,” Koehler said.

According to Santa Fe National Forest, people in potential hot spots should:

I have spent a fair amount of my "younger" life studying fire ecology. Many smart people realized ... me included ... in the early 1970s that total fire suppression was not "natural" and now about 50 years later many "younger" smart people are realizing fire suppression is not a good policy. Oh well, live and learn. BTW ... did you vote in the last election?

New Mexico is now looking at a river like the one we have been sending to Mexico--one without water. Wildfires year-round, No grass for cattle. Time to be climate smart at home. Joe has turned off the valve on tar sands oil from north-central Canada, and they are not happy. But not while we continue to produce oil and gas here. We need to say goodbye to the money river from oil gas like no one else can, here at home. We need to water the garden of new, green industry and jobs, starting with wind and sun, which we have in abundance. I see wind turbine blades coming north on I-25 nearly every day. Let's be sure they stay in our state. Can't feed cattle? Then plant sola farms. Don't like leaving oil and gas in the ground? I hereby christen it the New Mexico National Oil and Gas Reserve.