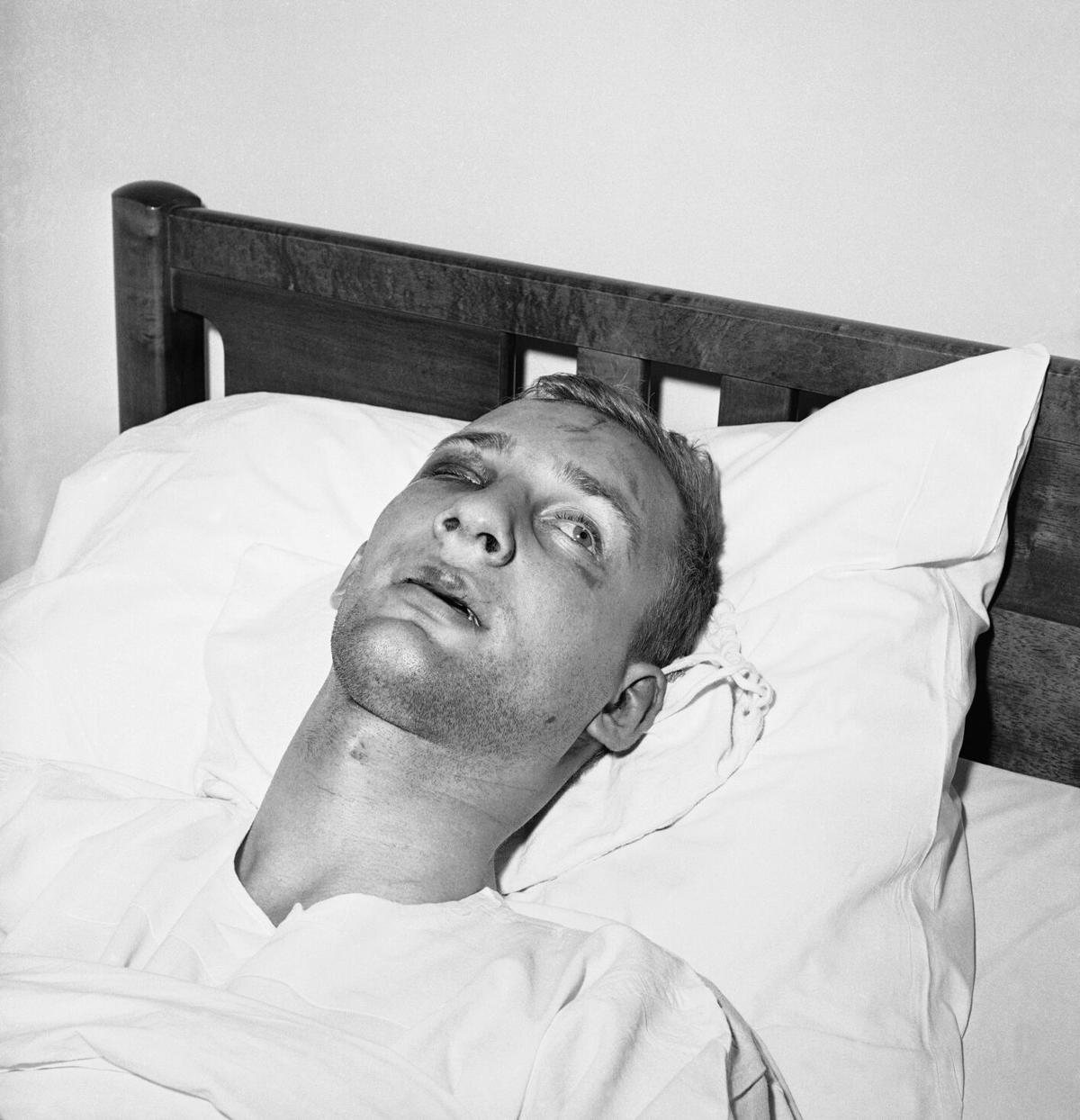 James Zwerg recovers the day after he and other Freedom Riders were beaten by a mob at the Montgomery, Ala., on May 20, 1961.

May 20, 1961: John Lewis and 18 other Freedom Riders arrive at a Greyhound bus station. The public safety commissioner promised they would be safe.

Instead, the commissioner withdrew police officers from the neighborhood. Ku Klux Klan members and their cohorts lie in wait.

“Montgomery, Ala. — An angry howling mob — with women screaming ‘get those niggers’ — attacked a racially mixed group of bus riders in a bloody street brawl here today.

“Two of the three most severely beaten students were James Zwerg, a white student, and John Lewis, 21, Troy, Ala., Negro who is a student at the American Baptist Seminary at Nashville.”

Flash ahead to the present. Demonstrators in Santa Fe and 130 other cities will mobilize Saturday for the “John Lewis Votercade,” a demonstration to protect voting rights.

Lewis, who became a congressman representing Georgia, died last year at age 80 after a lifetime of being attacked, physically and otherwise, for his work on civil rights.

Zwerg, who grew up in Wisconsin, now lives on an old cattle ranch in Ramah in McKinley County. He said he thinks about Lewis every day for reasons that go well beyond the beating they shared.

“I was about six months older than John, but I was in awe of him,” Zwerg said in an interview. “He had a profound faith. He was totally committed to nonviolence.”

Lewis, as a teenager, decided to work for social justice. His motivation was 14-year-old Emmett Till, lynched in 1955 by two white men in Mississippi. After arriving in Nashville, Tenn., for seminary school, Lewis joined other Black college students at sit-ins to desegregate lunch counters. A protest in February 1960 led to Lewis’ first arrest. He and three other Black students sat at the counter of a drugstore in downtown Nashville. They tried to order a meal, but a waitress told them to leave. When Lewis and the others remained seated, the store owner called police.

The judge’s certitude didn’t last. Lewis and the others continued their sit-ins, and Nashville became the first Southern city to desegregate lunch counters. At that time, Zwerg was studying sociology at Beloit College in Wisconsin. Fisk University, a historically Black school in Nashville, had an exchange program with Beloit. Zwerg, admittedly naive, signed up to spend a semester at Fisk.

“I went down there not knowing anything,” he said.

With his green eyes, he stood out, but he also fit in. He made friends with Black students. One day, Zwerg suggested they all go to a movie. Only then did he learn the theaters were segregated.

“I was angry — angry for myself. Who was anybody to tell me where I had to sit in a theater?” Zwerg said.

He joined the desegregation effort as a Freedom Rider. Zwerg’s assignment would take him to Alabama, where Gov. John Patterson had defeated George Wallace by being more extreme on segregation. Zwerg sat next to a Black student near the front of a commercial bus. In Birmingham, segregationists told the Black kid to move to “the colored section” in the rear. The student refused.

Police ordered Zwerg to exit his seat so they could grab hold of the Black student and take him to jail. Zwerg wouldn’t budge. Connor arrested Zwerg, too.

Zwerg spent two days in the Birmingham jail before rejoining Freedom Riders on a bus to Montgomery.

He sat next to Lewis. Gov. Patterson had said he couldn’t guarantee the safety of radical outsiders. But the governor’s public safety director, Floyd Mann, had a heart.

Mann said his officers would provide protection for Freedom Riders on the next leg of their trip, then hand off that responsibility to city police in Montgomery. Mann didn’t know a double-cross would occur.

On the bus, Zwerg sat next to Lewis, who was a model of poise.

“John was so relaxed, he actually took a nap,” Zwerg said.

As the bus rolled into Montgomery, Zwerg sensed trouble. The city was silent, almost eerie.

Montgomery’s public safety commissioner, L.B. Sullivan, told the Klan that Black outsiders were about to arrive. Some state police officers were on the bus with the Freedom Riders, but they were outnumbered by the attacking white mob.

“A mass of humanity came at us,” Zwerg said. “They were shouting, ‘Get the niggers, kill the niggers.’

“I bowed my head and I prayed. I asked for the strength to remain nonviolent. Then a peace came over me. I knew in that instant whether I lived or died I was going to be OK.”

Attackers beat Zwerg until he was bloody and unconscious. When he woke, Lewis gave him a handkerchief.

A photo of Zwerg in his hospital bed ran on front pages across the country.

Zwerg went on to become a minister, a lobbyist in Arizona and an employee of IBM.

He retired to rustic New Mexico a decade ago. He’s 50 miles from a doctor or a grocery store.

Memories of Lewis are close at hand.

“He had a speech impediment and he didn’t say a lot. But when John talked, everybody listened,” Zwerg said.

It’s been 60 years since they took a beating together. That was the price of desegregation.

Ringside Seat is an opinion column about people, politics and news. Contact Milan Simonich at msimonich@sfnmexican.com or 505-986-3080.

To show up and confront the Klan on their doorstep like that is awe inspiring. Just ride on into town by bus in total defiance of a backward and unjust system to say 'enough'. The boldness and bravery of these young people will never not leave me slack-jawed.

Thank you for this moving and inspirational story.

Thanks always to John Lewis, for leading the way. Now thanks to James Zwerg for your strength of faith in your commitment to Justice and Nonviolent Protest.

And thanks to Milan, for so well bringing forth this history of the good people who so changed this land for the better, folks who truly aspired to making America great by finally holding this country to its promise.