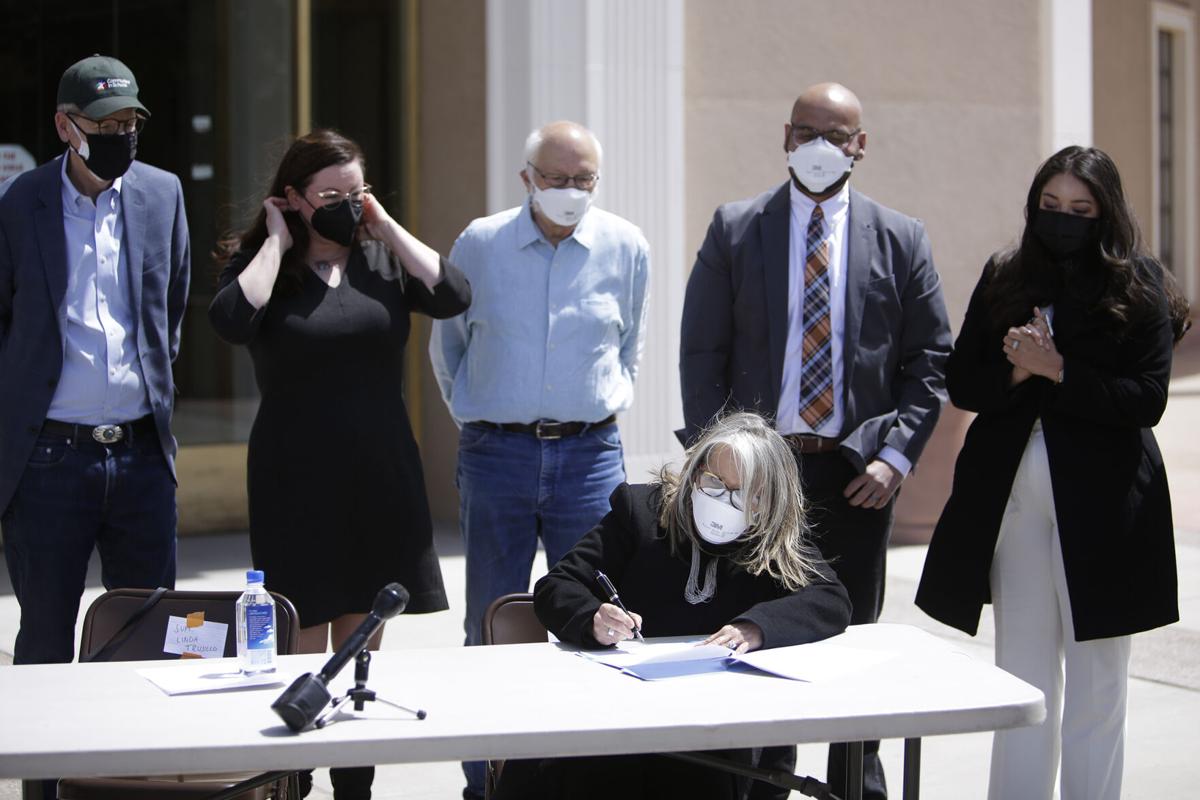 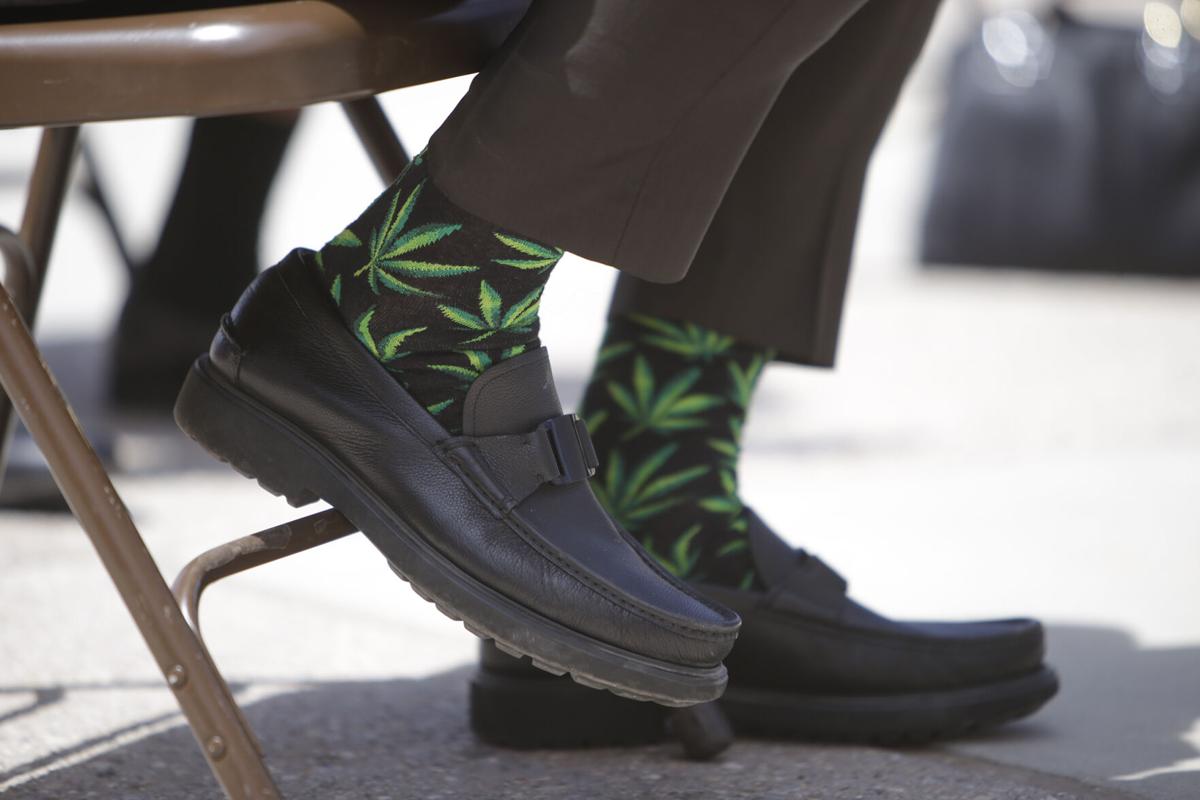 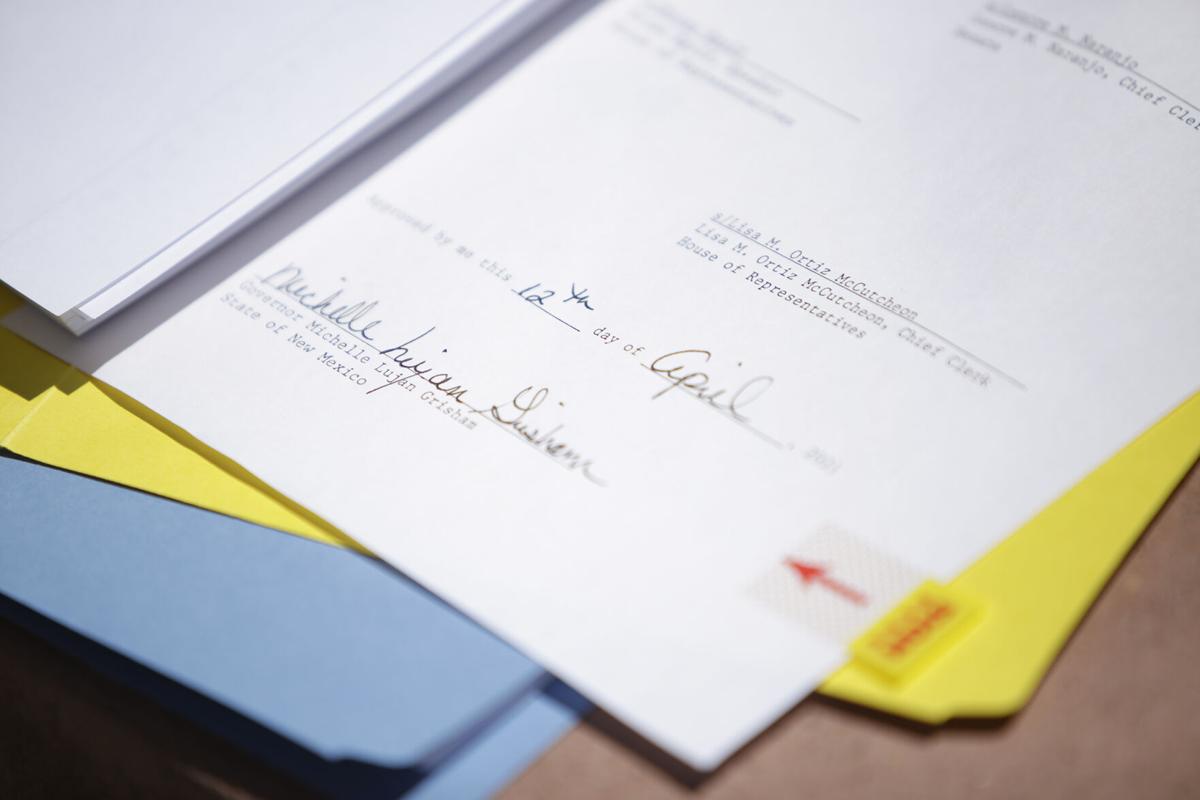 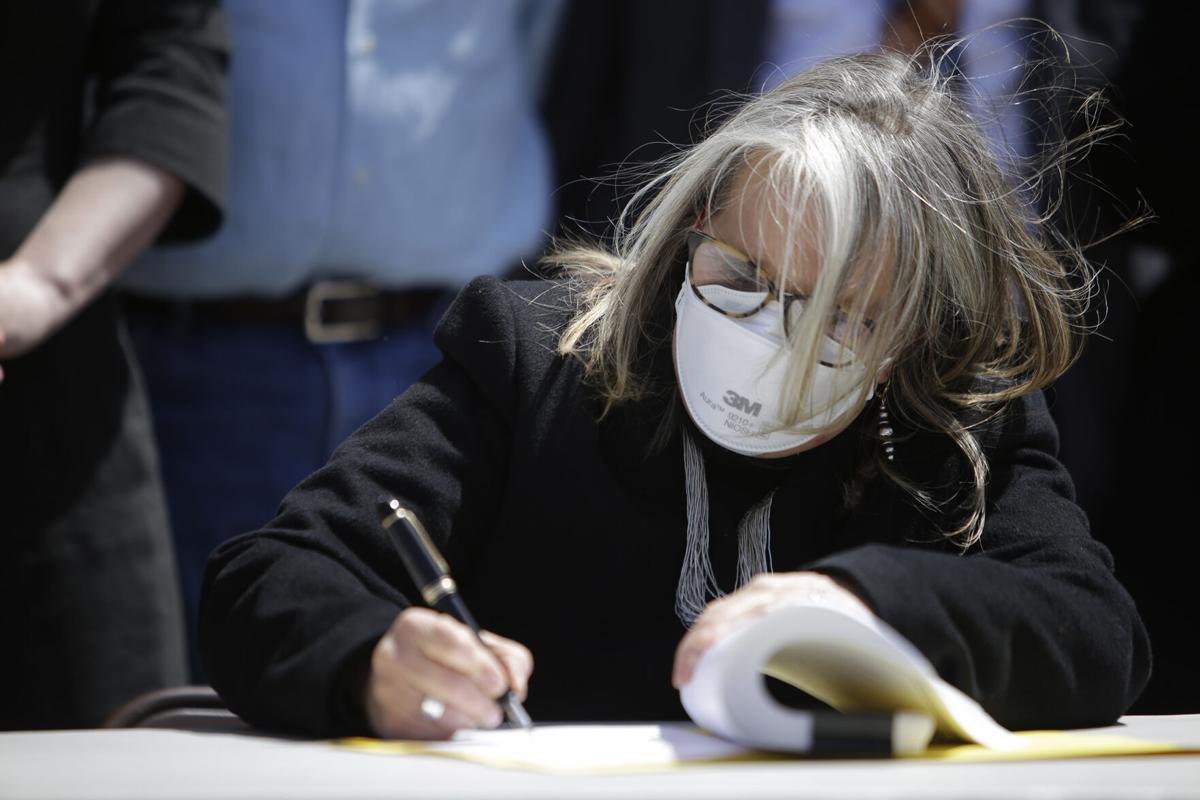 “Congratulations to every single one of us in New Mexico for getting this right,” the governor said during a windy and socially distanced news conference on the west side of the state Capitol. “I couldn’t be prouder.”

The governor also signed into law a separate measure that expunges certain cannabis-related convictions, which could affect tens of thousands of people.

“There is work already on social justice,” said Lujan Grisham, adding the state Corrections Department has identified 100 people behind bars today who could be eligible for early release and that the New Mexico State Police identified 150,000 individuals whose convictions will be reviewed for possible expungement.

Legalizing adult-use cannabis brings about social justice “in ways in which we have been talking about and advocating for, for decades,” Lujan Grisham said.

“We know one thing, and I’m looking right at the Drug Policy Alliance when I say this,” the governor said. “It is a failed war on drugs which has disproportionately, negatively impacted communities of color, and this is a way to not only diversify our economy — good for local governments, good for the state government — but it means that we’re bringing about justice in every single community to so many New Mexicans who have waited far too long for us to get that done. And I congratulate this Legislature for getting this bill across the finish line.”

The bill signing comes after the governor called a special session to deal almost exclusively with legalizing recreational marijuana after lawmakers failed to reach agreement on the matter during the regular 60-day legislative session. Efforts in previous years had failed as well.

But not everybody is thrilled about New Mexico becoming the 17th state in the nation to legalize adult-use cannabis.

“The governor has a pipe dream of saving the state’s finances by hoping to rake in hundreds of millions of dollars from marijuana revenues, but it’s unclear just how much money will end up in state coffers,” he said.

According to the bill’s fiscal impact report, the industry could create about 11,000 jobs and create tens of millions of dollars in new revenue. According to preliminary estimates, the excise tax will generate at least $20 million for the general fund in the first full fiscal year and grow in subsequent years.

“I hope that all of the projections are more than realized,” Lujan Grisham said. “I really hope we exceed all expectations.”

The law will go into effect June 29.

“It will not be legal to possess or to grow your own until June 29th or later,” Regulation and Licensing Superintendent Linda Trujillo said.

Commercial sales will begin no sooner than April 1, 2022, and the issuance of licenses to conduct commercial cannabis activity will begin no later than Jan. 1, 2022.

The governor, however, won’t be partaking, at least not immediately.

“I just don’t really engage,” she said. “I have no reason not to when it’s ready to go, but I have no plans to rush out and do so. … I probably will just stay the course and look for endorphins in other places. But no opposition at all from this governor.”

“It’s not the perfect bill, and the fact that we got a piece of legislation across the line is what had to happen,” Senate Majority Leader Peter Wirth said. “What’s important to me is that we have in place a structure.”

Me and my friends had been waiting for the police to get off our backs since the 70’s for smoking weed! But this governor gets no credit for now making it legal! New Mexico young people (and older) have been getting stoned anyway! She prostituted the state because she’s jumped on the marijuana revenue band wagon with other states. The difference is that New Mexico kids barely graduate from high school, go on to college, and make something of themselves. Well, they can now make something of themselves. Legal Stoners!

nothing of the sort happened. Voters in NM contacted their state legislators telling them how they felt about marijuana being used as a vehicle to make slaves; the state legislators finally listened to the voters instead of the corporations, and passed a bill that the voters wanted. Then the governor signed it. that isn't prostitution, that is representative democracy in action.

Steve Pearse is not for the State of NM. He is worried about crime, when it has been with us all this time and it is not going to change. I ask, how will it change it? People are going to have to go on the black market and buy. It's going to, if anything, move the drug dealers to take their product to other states that do not legalize it. I believe Mr. Pearce is confused. He has never really been there for the improvement of our state.

Also, I'm also hoping that our governor and legislatures use and improve our state finances correctly. I'm hoping they don't use it for something that is not needed. Our hope could be rehabilitation for the people that need it and to clean up our streets.

Prohibition of alcohol was a failure a hundred years ago. The people that made money were violent criminals and paid no taxes. The same goes for marijuana prohibition. The trade exists, legal or not. Now the trade might provide some money for positive uses.

Senate Majority Leader Peter Wirth said, "What's important to me is that we have in place a structure." Definitely, he's correct about that one (sarcastically). Now, the Governor and her Democratic lawmakers can tout, give each other high-five's, and gloat about their victories. Yes, the funeral industry (structure) in New Mexico will have a positive financial gain opportunity with an increase death rates of driving under the influence (DUI's related to cannabis abuse) cases, abortion of babies filling up the local morgues, and the assisted-suicides from the local hospitals and nursing facilities in New Mexico, Governor Michelle Lujan Grisham is correct to state: "I couldn't be prouder."

no state that legalized had an increase in deaths from marijuana dui. The rates remained the same in legalized states. abortion fetuses are not only not children, but they don't go to morgues either, certainly not enough abortions anyway to fill up any morgue regardless. And yes the supreme court ruled it is your civil right to end your own life. Sorry you hate the constitution so much.

good, some new mexicans could use a way a relax instead of harassing everyone they don't like.

They didn't have a fog machine available for this photo op?

Hardly a "game changer" as the Governor would have us believe. Like the lottery, which was also touted, the money will go to the wrong people.

Meanwhile, they loosened the restrictions on alcohol sales. More New Mexicans having more ways to avoid the reality around us. The Governor is big on avoiding reality so this works for her.

[thumbup] When you live in a partisan dream world, reality is your enemy......

More proof of how backward NM really is. The belief that legalizing a mind-altering drug will save the state from economic ruin, improve education, poverty, and quality of life factors is about as ignorant as it gets. Just like casinos, the lottery, etc., the kind of people who believe these to be businesses that improve our society also elect the kind of people that keep us last in all measures. I can't wait to see what happens over the next few years, as the denialism and excuses come out as to why NM is still last......it will be humorous at least, and if you are stoned, hang loose man......who cares?

Now people can get stoned legally but I still can't purchase wine at the supermarket on Sunday morning for my dinner guests Sunday night. No. I am not happy about legalizing pot.

[thumbup] Happy to be a new citizen in such a progressive state!

Welcome, Paul Silver! There have always been so many ways to be high on New Mexico. Now, one more.....

Yes! And a huge tax revenue boon. And people can grow their own. But WAIT. No pot for children (pot harms growing brains), and that means no pot infused sweets, which have ben found to have very high THC levels. Don't worsen the children's pandemic learning drought.

The Governor should have scheduled her special legislative session to legalize pot to allow her to sign and make the law effective on 4/20. "April 20 (or 4/20) is cherished by pot smokers around the world as a reason to toke up with friends and massive crowds each year. Major rallies occur across the country, particularly in places like Colorado and California, where marijuana is legal." Since her marijuana law will not allow sales until next year, she could have timed it to allow the first pot sales on 4/20.