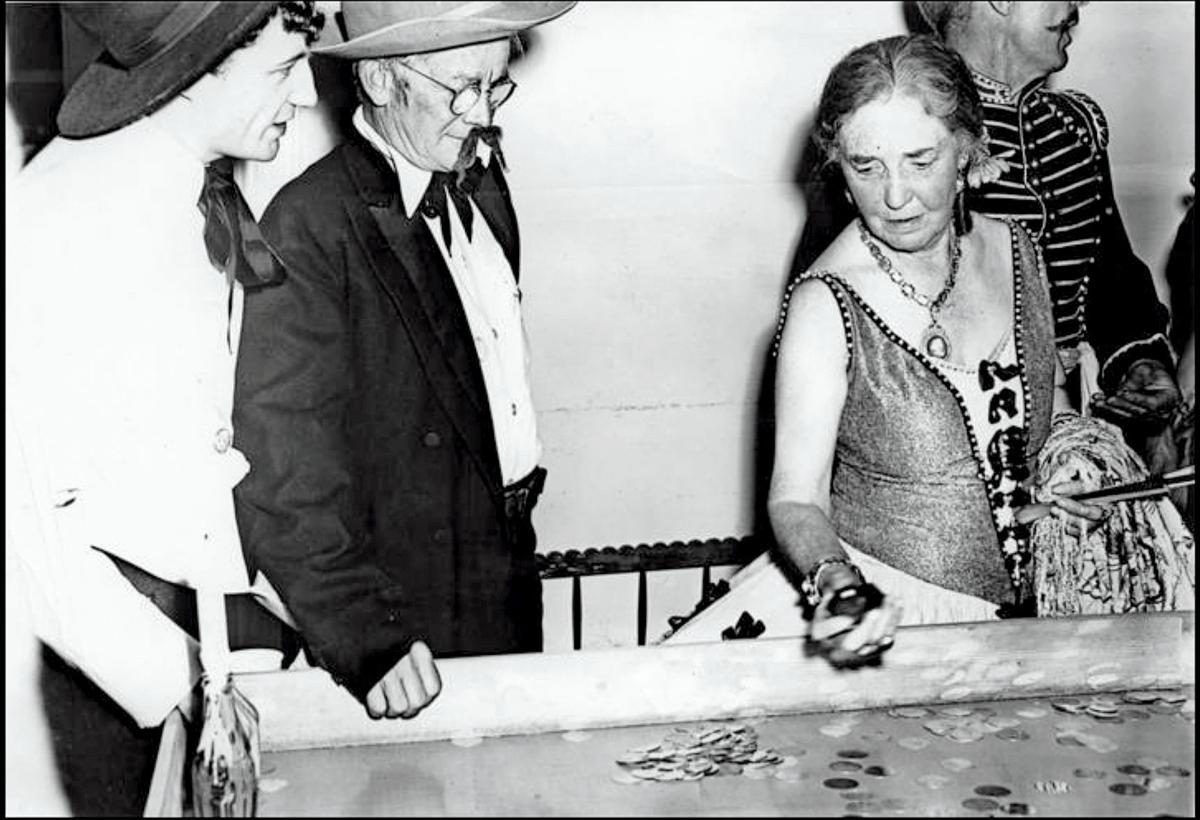 Artist Will Shuster, in a fake mustache, and Nina Otero-Warren, also in costume, attend a party in 1949. Otero-Warren, a former superintendent of Santa Fe schools, bears much of the responsibility for pushing the 19th Amendment, which guaranteed women the right to vote, through the New Mexico Legislature. 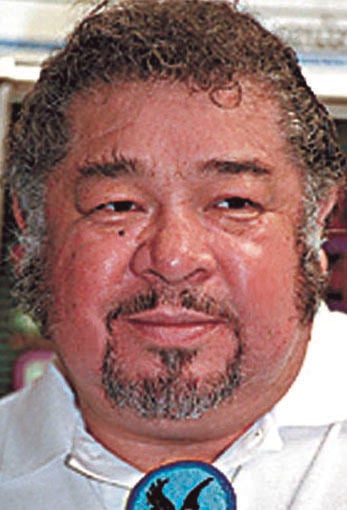 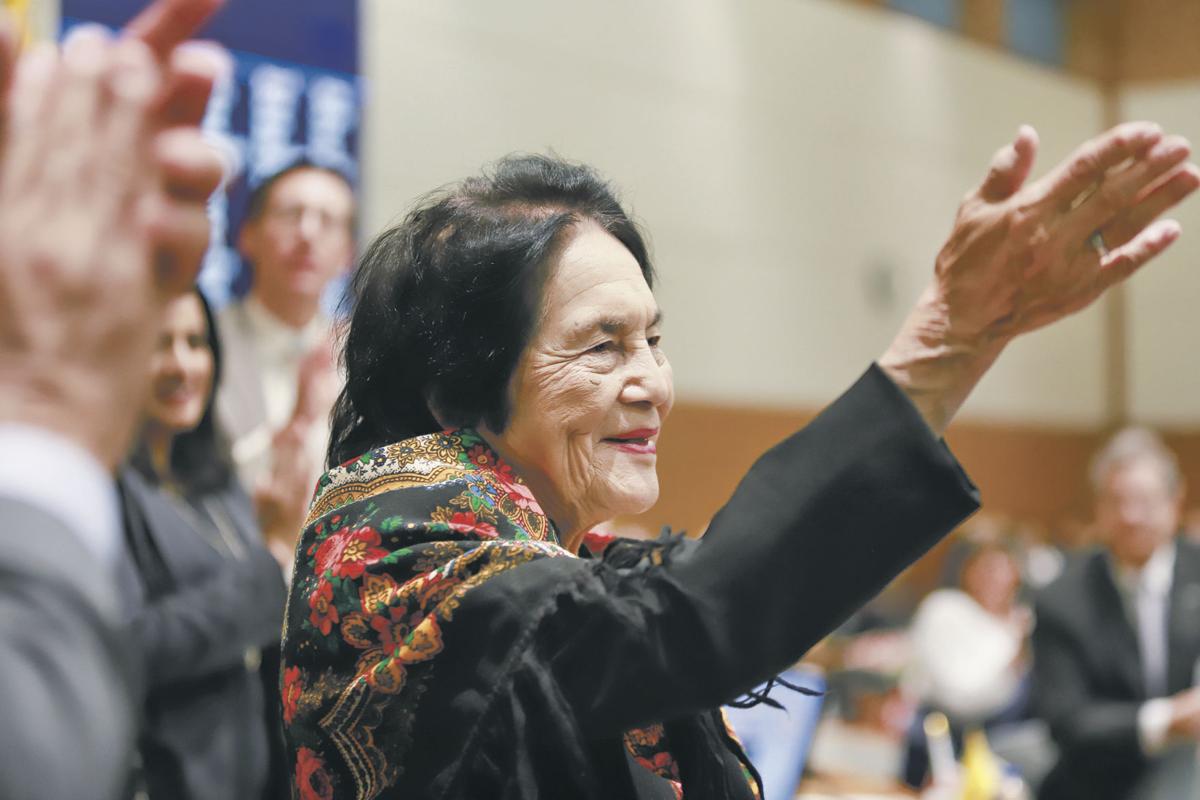 Dolores Huerta is a longtime advocate for workers and immigrants.

Artist Will Shuster, in a fake mustache, and Nina Otero-Warren, also in costume, attend a party in 1949. Otero-Warren, a former superintendent of Santa Fe schools, bears much of the responsibility for pushing the 19th Amendment, which guaranteed women the right to vote, through the New Mexico Legislature.

Dolores Huerta is a longtime advocate for workers and immigrants.

And there are others, many others.

As New Mexico convulses away from controversial historical figures whose lives, like most lives, were filled with frailties that have cast a shadow on their legacies, the question becomes: Who’s next?

Whose life and work is worthy of a statue?

State historians and others say it’s still too soon to identify people who could someday take the place of Spanish conquistadors Don Juan de Oñate and Don Diego de Vargas or frontiersman Christopher “Kit” Carson atop concrete pedestals and on the front of school buildings. But they acknowledge the controversy of history does have hidden benefits — an increased interest, a deeper understanding of its complexities and renewed calls for an open and honest dialogue about the events and people that shaped New Mexico.

“There’s a good that can come out of all this, and that is people talking,” said State Historian Rob Martinez.

Estevan Rael-Gálvez, a cultural anthropologist who also served as the state’s historian, echoed a similar sentiment.

Rael-Gálvez, former senior vice president for historic sites at the National Trust for Historic Preservation, said history cannot be separated from the dynamics of power. Across time, he said, it has rendered some historical narratives credible and erased others, which has propelled him to recover untold stories.

“We are living in a moment where we all have the opportunity to lean in and listen to one another’s stories and truths, to take the time to truly learn about the past that continues to play out in the present,” Rael-Gálvez said.

Santa Fe has been confronting its storied but bloody past in recent weeks after Indigenous activists called for the removal of two obelisks — including a 153-year-old war monument in the heart of downtown that was dedicated in part to the “heroes” who died in battle with “savage Indians” — and a statue of de Vargas, who led the Spanish resettlement of Santa Fe after the Pueblo Revolt of 1680.

Mayor Alan Webber called for the removal of the monuments, angering some longtime Hispanics who consider the move an assault on their culture, particularly with the de Vargas statue. The mayor also announced plans to form a Truth and Reconciliation Commission that will evaluate every statue and monument in the city and help determine their fate — an exercise started by former Mayor Javier Gonzales that had not moved forward.

As the city begins to tackle the politically thorny issue of monuments, it’s unclear how the review will affect plans to install a statue of Catua and Omtua, Tesuque Pueblo runners who notified other tribes about the start of the Pueblo Revolt, near the courtyard of the Santa Fe Community Convention Center. The courtyard already is dedicated to the two runners.

Pauline Kanako Kamiyama, director of the city’s Arts and Culture Department, did not return a message seeking comment.

While the city removed the de Vargas statue for safekeeping and a state contractor made an unsuccessful attempt to fully remove the Plaza obelisk, the two obelisks are still standing, though a protective barrier has been installed around both after each was vandalized.

“There is always a benefit in having conversations and dialogue, leading to a more inclusive view and interpretation of our shared history,” Cultural Affairs Secretary Debra Garcia y Griego said in an email. “Acknowledging multiple voices and historic trauma is important. There, however, is no place for, nor benefit from, violence, threats to personal safety, or the destruction of property.”

Hampton Sides, author of the bestseller Blood and Thunder: An Epic of the American West, agreed.

“Anything that gets people talking and thinking about history is usually a good thing,” he said via email. “But I fear that some of what’s going on now isn’t particularly thoughtful, it’s merely reflexive, impulsive. ‘Tear ’em down! Spray-paint ’em! Rip ’em up!’ Sifting and reevaluating history is one thing, vandalism is something else.”

Asked whether figures such as Carson and de Vargas were worthy of a statue, Sides said he believes in history as well as democracy.

“We can’t choose our own past, but each generation gets to decide who its wants to honor and celebrate in its most public spaces,” he wrote. “I’m all for that evolution in the public iconography, as long as the decisions are arrived at after real debate and informed discussion. But I do worry that in our search for utterly inoffensive figures, especially ones from our deep past, there won’t be anyone left to put on a pedestal. There are some who seem to want only perfect people to recognize and honor. Well, guess what, perfect people don’t exist — and never did.”

Matthew J. Martinez, an Ohkay Owingeh member who is the deputy director at the Museum of Indian Arts and Culture, said there needs to be a “land acknowledgement of Ogha Po’oge,” or White Shell Water Place, as the original place name of the city of Santa Fe “before any conversation of monuments is to take place.”

“The creation and development of New Mexico extends well beyond present-day monuments,” he said. “We must recognize that our ancestors and Indigenous people were the original stewards of lands.”

Matthew Martinez said the list of people who had a hand in shaping the state and deserve recognition includes “schoolteachers, artists, government leaders and grandparents” — people who should be the subject of lessons at school.

“However, it is important to recognize that the building of monuments and honoring heroes in this matter is a European construct,” Matthew Martinez said. “Nations have built legacies of heroes and conquerors by forever memorializing them as cemented objects. … We now have an opportunity to rethink beyond these practices in ways that reflect our state’s values.”

A scan of 19th- and 20th-century New Mexico reveals a state that doesn’t lack for champions and dedicated public servants from all backgrounds. Some, like Fernández and Miyamura, were war heroes, recipients of the Medal of Honor. Others, including King, Larrazolo and Lewis, were respected elected officials, admired in many quarters. Native leaders such as Viarrial and Chino played key roles in defending tribal sovereignty. Biehl died while promoting peace. One, Gutierrez, went to space.

Rob Martinez, the state historian, said he wonders whether “we need to start moving beyond” the idea of erecting monuments “because it always seems to cause problems.”

“I think we have to just really rethink how we celebrate our shared history and our communal and family histories and what it means because we are not Juan de Oñate, and he is not us,” he said.

“We descend from the colonists that came here and stayed. He left. Our ancestors stayed. We need to stay focused on what happened and the reality and truth of it. The good, the bad and the ugly — that’s what history is.”

Tearing down statues/monuments Does Not change our history!

If there needs to be any kind of monument, what about a round table, with representatives of all cultures and eras having an equal seat at the table?

The anarchists do not want to discuss anything, just tear it all down ad destroy it. And the cowardly politicians, like Webber and MLG let them get away with it all.

We ourselves are required to read the histories of this place, not rely on an historian, before we decide if a statue or a monument is welcomed here. Why not place a bookstore on the Santa Fe Plaza? The newspaper could publish a list of relevant books that are required reading to address hegemony, colonialism, race, language, and equality.

As a lover of History, it saddens me to think that only the victor writes it. We need to see all sides. This doesn't mean tearing down what you don't like and burying it. We live in a different time than those who were honored with the obelisks and statues. It doesn't mean that we must now vilify those people. Yes, there were many injustices done. That point isn't arguable. But there was also much cooperation. We learned from all sides. And, at least in the Santa Fe where I grew up, differences were respected and even admired. We were inclusive, not divisive. We valued each other, not for who our ancestors might have been, but for the fact that New Mexico is a tough land and those who came and stayed were tough people.

One of the key suggestions made was that we might want to consider going beyond the European idea of monuments...

Congratulations Mr. Chacon, for another well-written piece. After reading the names of the diverse and dynamic New Mexicans, , perhaps, we need MORE statues to encourage and embolden children and citizens alike.