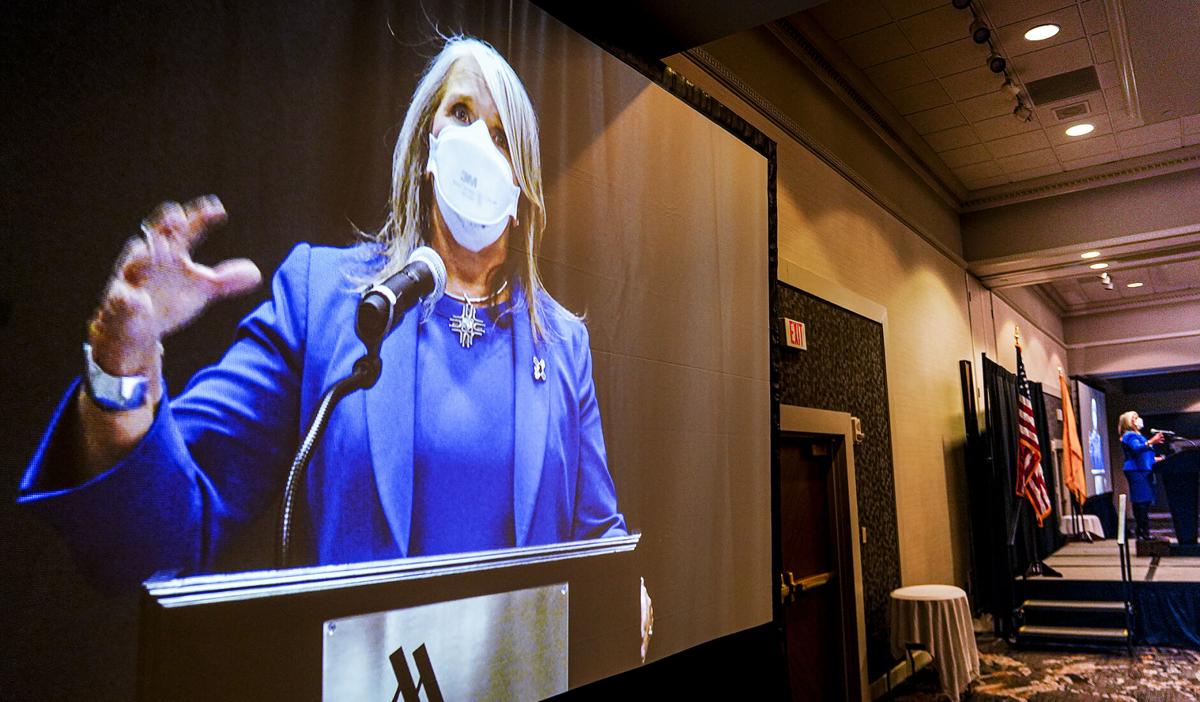 Gov. Michelle Lujan Grisham, speaking Tuesday in Albuquerque before a New Mexico commercial real estate industry group, says, 'We're going to ask the Legislature ... to define who gets held and who doesn't. Right now, we're working on a bill that says the following, that if you commit a crime using a weapon ... you are not safe enough to be out of jail pending your trial. We think that's going to be a sea change." 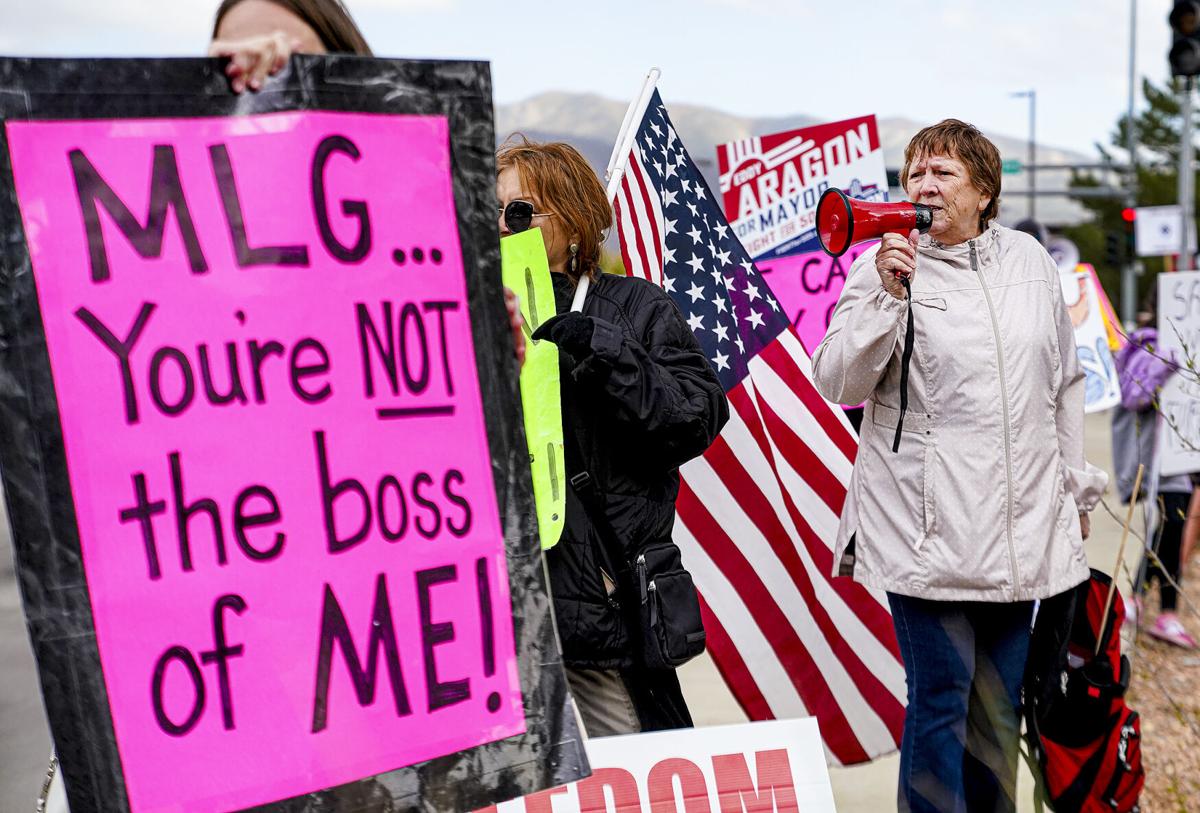 Gov. Michelle Lujan Grisham, speaking Tuesday in Albuquerque before a New Mexico commercial real estate industry group, says, 'We're going to ask the Legislature ... to define who gets held and who doesn't. Right now, we're working on a bill that says the following, that if you commit a crime using a weapon ... you are not safe enough to be out of jail pending your trial. We think that's going to be a sea change."

ALBUQUERQUE — Gov. Michelle Lujan Grisham touted her administration’s successes and laid out two of her top priorities for the upcoming legislative session during a gathering Tuesday of some of New Mexico’s key players in the commercial real estate industry.

Lujan Grisham, who is running for reelection in 2022 and has been hammered by her critics over crime — including a record-breaking number of homicides in Albuquerque — told members of a commercial real estate group best known by the acronym NAIOP she was going to “lean in” on statewide initiatives that affect public safety.

“No. 1, we’re going to ask for $100 million to go into a fund that would collectively allow us to have 1,000 additional statewide officers. That’s not just state police,” she said during a luncheon of the New Mexico chapter of the Commercial Real Estate Development Association.

Bail reform also will be on the governor’s call. Lujan Grisham said she’s appointed “a good number” of new judges, from District Court to the state Supreme Court, and bail reform has been a topic of discussion in every interview beforehand.

“We’re going to ask the Legislature … to define who gets held and who doesn’t,” she said. “Right now, we’re working on a bill that says the following: that if you commit a crime using a weapon ... you are not safe enough to be out of jail pending your trial. We think that’s going to be a sea change.”

Lujan Grisham, who arrived to the luncheon about 30 minutes after her 12:30 p.m. scheduled start time, spoke while wearing a mask. They were required for admittance to the ballroom at the Albuquerque Marriott.

“But we also don’t want violent offenders on our street,” she said.

While public safety will take “sort of center stage” during the 30-day budget session, Lujan Grisham said her administration is also going to pursue what she called an “economic aspect,” focusing on efforts to turn New Mexico into what she called a “hydrogen hub for the United States.”

“It is the next big sector,” she said, “and if we don’t find ways to decarbonize [transportation], all the work that we’re doing in the oil and gas industry has limited value to the entire state in terms of climate change and the environment.”

Though Lujan Grisham’s push on hydrogen has sparked concerns from a coalition of environmental groups, the governor said it could turn into a windfall for the state.

“It means billions, potentially hundreds of billions, over the course of a decade or two of revenue moving through our state,” she said.

Stuart Hamilton, who served as mayor of Angel Fire from 2008-12 and is now general manager for Goodmans Interior Structures, said the governor’s focus on hydrogen stood out in her remarks.

During her speech, the governor announced John Garcia, executive vice president of the Home Builders Association, has been tapped to serve as Cabinet secretary of the General Services Department. He said he’s scheduled to start the job Nov. 1.

Garcia said he served as tourism and economic development secretary in the Gary Johnson administration.

Lynne Andersen, president of the New Mexico chapter of the Commercial Real Estate Development Association, said the group has invited the governor to speak before its members every year since she’s been president for the last 26 years.

“It’s important to hear from the highest person in our state who controls a lot of what impacts development and economic development in New Mexico,” she said.

Andersen said many of the people who attended Tuesday’s luncheon are the owners of locally owned businesses.

“Unfortunately — I’ll add that because it is something that I think the state needs to understand — is that those businesses often go out of state to keep their business alive in New Mexico because there are rules and regulations that are very different in Texas, Arizona, Colorado, Utah, that are much more receptive of business, private business, than sometimes New Mexico is,” she said.

While the governor’s remarks were generally well received by the industry group, Lujan Grisham was once again greeted by about 20 protesters outside.

“We’re sick of the mandates [stemming from the coronavirus pandemic], the taking away of our freedoms. Everything that she stands for is wrong, and if we don’t stand up now, we’re losing everything.”

Carrillo wore a T-shirt emblazoned with “New Mexican Lizard People Unite” on the front, a reference to a joke Lujan Grisham made when a large group of protesters disrupted an event in June when she formally announced she was seeking reelection.

“I just have to say,” Lujan Grisham said at the time, “I’m sorry that we picked the same location that the QAnon lizard people meeting was at.”

Carrillo said some of the governor’s critics have “totally embraced” the name-calling.

“QAnon, you know, that’s something totally different, but we are the lizard people,” she said. “Keep it coming. That’s what we do. We turn what’s bad for good, and that’s what we’ll continue to do.”

No mention of NM police training which is an absolute train wreck, and includes an illegal curriculum since 2013. Her first choice for DPS Secretary, Mark Shea, was an absolute incompetent, whose "police experience" was Albuquerque Public Schools. He stunk up the place until Sept 2020. Her current choice for DPS Secretary seems another poor choice. Michelle know's NOTHING about the police problems, or the Corrections problems, she's just hunting votes. Same with her hydrogen talk. I'm surprised she can even spell hydrogen. It's a really dumb idea, that sounds good, as the its economically and environmentally unsound. But what would she know...??

A failed attorney, and a failed DOH Secretary under Richardson (2004-2007), her "experience" as a manager is NULL. It seems she doesn't even know that the Governor is an "Executive" not a "Legislator", as she continually violates the laws passed by the Legislature. But, who's to prosecute her law breaking?? The corrupt Attorney General, Hector Balderas?? Time to sweep out the place, and let some fresh air in. And send little Michelle back to 5th grade, to study Civics.

Chris Mechels, here you go again spewing vomit all over yourself. The train wreck that you continue to rant about "an illegal curriculum since 2013" is not going anywhere because you have no subject matter expertise to change it, period! The "universal" police training curriculum, specifically, the use of deadly force application that is currently utilized throughout the United States has been vetted into every law enforcement academy curriculum in every state with constitutional restraints, mandates of law for each state, and due process. By the way, the former DPS Secretary, Mark Shea that you speak of in a disrespectful manner is out of line. I have known Mr. Shea for a long time and his character exhibits an honorable, high moral compass, trustful, integrity, and dignity attributes. You have no right to disrespect his name and/or others who are law enforcement officer's in our state.

I found the headline misleading. I don't understand how a governor is responsible for an increase in murders in one city. Maybe the citizens are tired of getting shot by the APD and their well-documented abuses of civil rights. Whatever the reason or reasons, it's nice to know that Gov. MLG thinks more state troopers will mitigate the issue along with bail reform, whatever that really means. Finally, reporting that there were protestors is not news. Had these protestors interfered with the meeting would be news. That there were no protestors would be news.

Hydrogen energy is certainly complicated and not fit for all purposes. However, one of the very good uses of hydrogen is the cheap storage and transportation of energy. Solar and wind energy can be transferred into hydrogen where it can be stored indefinitely without loss and transported cheaply. Utah already has a project like this to supply their wind and sun to California. When New Mexicans can do this we can truly transition to clean energy. And become a much richer state! The Governor's projections are rosy; but this is an area of innovation for which she should be congratulated.

Shocking that MLG final is pushing for more security and bail reform, when New Mexicans have been begging for these changes for years. Also agree that education needs a complete overhaul, which will be next on her agenda. It’s amazing what a re-election campaign will do to motivate a politician…..she is reprehensible!

Lujan says that hydrogen-fuel will eventually generate "hundreds of billions" in tax revenue. Petroleum industry currently generates about $2B in annual NM tax revenues, about 1/3 of NM total tax revenue. How she gets to "hundreds of Billions" is beyond me, especially since hydrogen fuel is in its infancy. Obviously been taking lessons from Gov. Bill.

And all reputable scientists are in agreement that the oil and gas industries and helping to destroy our earth. Even though we now depend on it for finances, it is killing us. Hydrogen might not be the medicine we need, but it might be a long-term goal. Right now, solar and wind are our best remedies.

Obviously we need more social workers to go out on patrol with the various city, country, and state police officers ... to tell the poor folks committing crimes just not to do it again or they will face restorative justice (meaningless as it is).

You should know that all your efforts shall come to naught.

I really question the "hydrogen hub". In fact, I question almost everything that is promoted by this Administration. New Mexico can do much better!

Can we also have 1,000 more teachers? That way we can give New Mexico's young people more to live for and not resort to crime and drugs to begin with? This is too little too late and investing heavily in a broken police pedagogy while young people in this state already feel like they've been given up on.