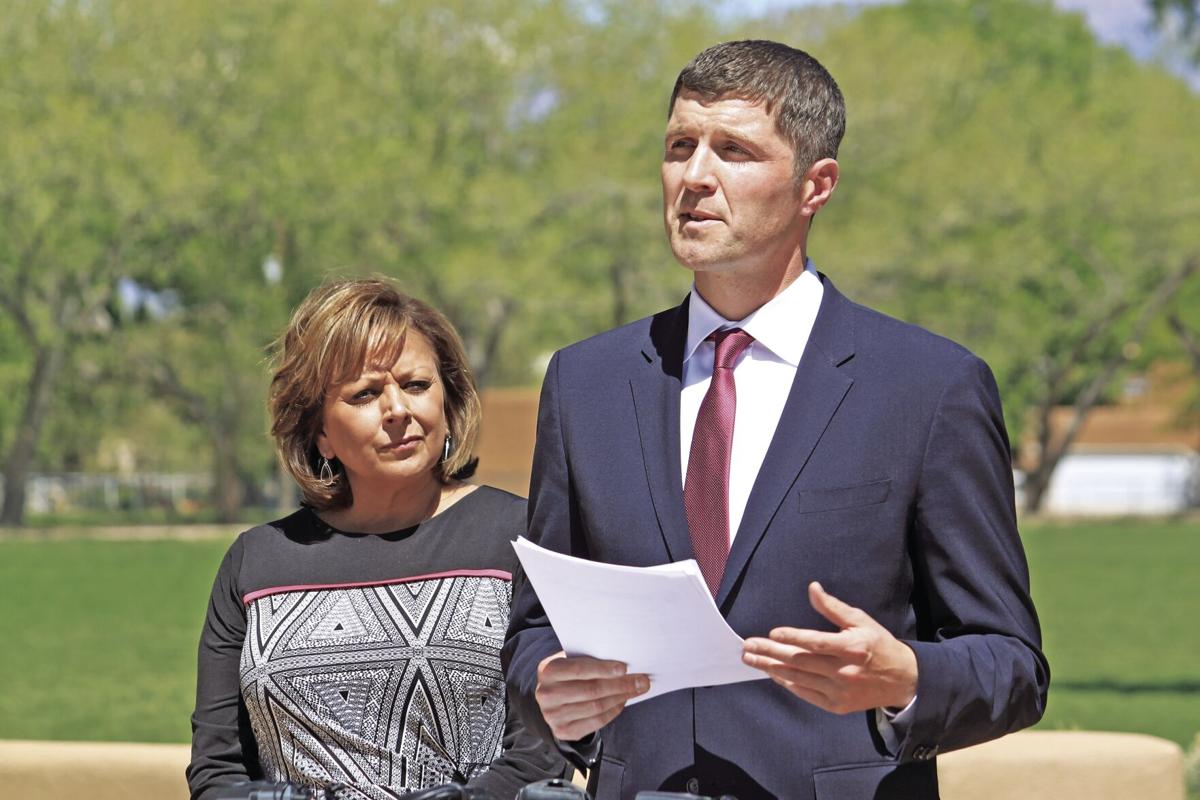 Ryan Flynn, executive director of the New Mexico Oil & Gas Association, is seen in 2015 when he was the New Mexico environment secretary under then-Gov. Susana Martinez, left. 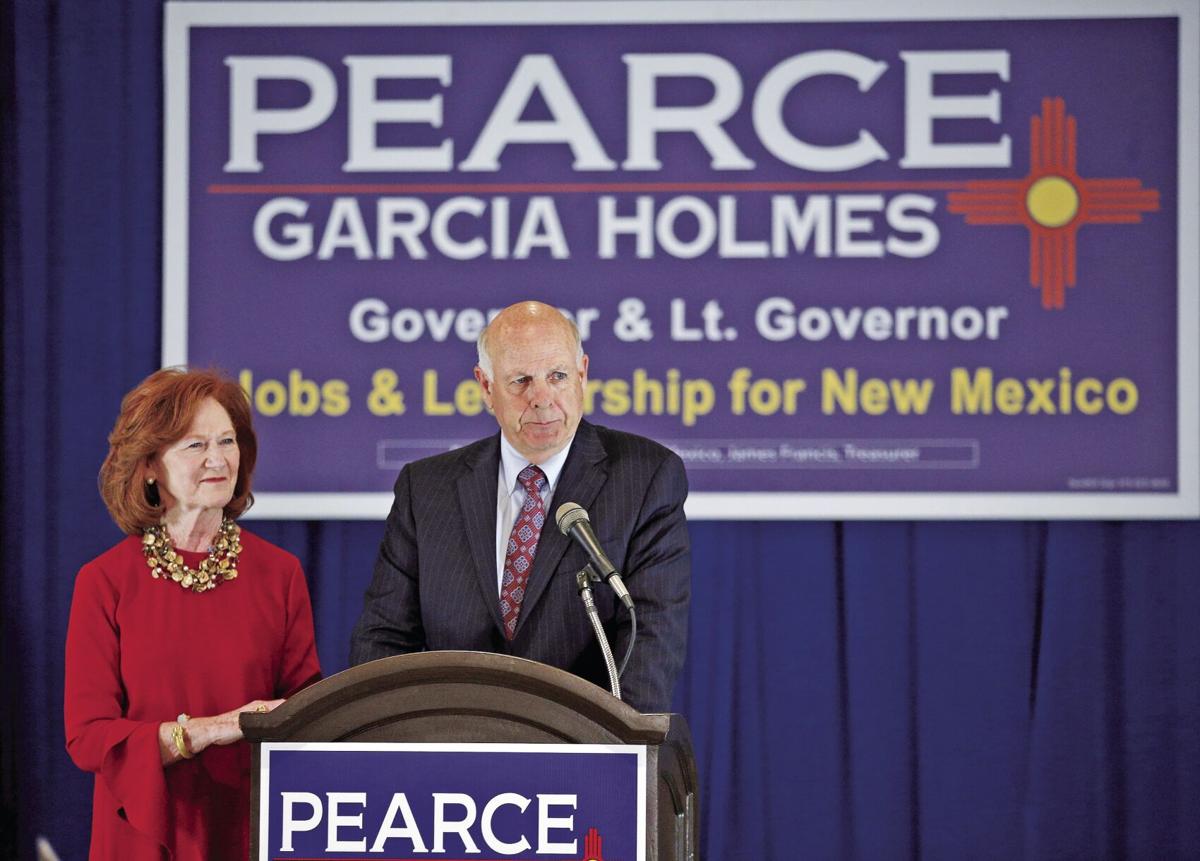 Ryan Flynn, executive director of the New Mexico Oil & Gas Association, is seen in 2015 when he was the New Mexico environment secretary under then-Gov. Susana Martinez, left.

It isn’t often that the Republican Party pushes for the removal of an oil and gas representative. But these aren’t normal times.

Around a dozen small oil and gas producers have called for the ouster or resignation of Ryan Flynn, executive director of the New Mexico Oil & Gas Association and a former Cabinet secretary for a Republican governor.

They are upset that Flynn praised U.S. Rep. Xochitl Torres Small, a Democrat representing New Mexico’s 2nd Congressional District who will face off against Republican candidate Yvette Herrell in the November election.

“The Republican Party of New Mexico stands with the leaders of our locally owned firms in the oil and gas industry who have lost confidence in Ryan Flynn for supporting progressive Democrats like Rep. Xochitl Torres Small,” Pearce said in a statement. “I commend them in calling for his resignation and I hope the NMOGA board of directors takes their concerns seriously.”

The party’s efforts did not appear to get the desired effect Friday; the oil association’s board said it still supported Flynn.

“The Board of Directors stands firmly behind Ryan Flynn and the work that NMOGA has done to advance the oil and gas industry in these challenging times,” the board said in a joint statement.

“We will continue to work with federal, state and local leaders, regardless of their political affiliation, who share our commitment to New Mexico’s economy, schools and communities,” the board added.

Flynn also has praised Herrell, a former New Mexico legislator, saying Sunday she “demonstrated a favorable record during her service in the Roundhouse.”

The brouhaha began after Flynn said earlier this month Torres Small had been an advocate for the industry and said she opposed banning fracking, the extraction process also known as hydraulic fracturing.

Soon after, Pearce wrote an op-ed published in The New Mexican accusing Flynn of using the New Mexico Oil & Gas Association “as a political weapon” and charging that involving the organization in a political race was “unethical” and “potentially illegal.”

Next came the independent oil companies, who wrote an Aug. 10 letter to the association’s chairman, Scott Kidwell, who is senior vice president of administration at Concho Resources, one of the top oil producers in New Mexico.

The companies suggested in the missive that Flynn’s praise of Torres Small was an attempt to “sabotage the candidacy and fundraising efforts of Ms. Herrell.”

The letter was not signed by any of the largest 25 oil companies in New Mexico by production. Only one of the companies that signed appears in a 2018 list of the 50 largest oil and gas producers in the state. That was Strata Production, which is the 43rd largest, according to the New Mexico Oil & Gas Association.

In their letter, the companies also refuted Flynn’s statement that Torres Small opposes fracking, saying she “has in fact voted in support of legislation that would lead to a fracking ban.”

The producers did not specify which vote they were referring to in their letter, but Pearce made a similar assertion his op-ed, saying Torres Small voted for a fracking ban in February.

Both bills would ban all onshore and offshore fracking by 2025. Neither received a vote in its chamber. Torres Small released a statement opposing the measures.

“I have consistently spoken out against a ban on fracking, and my record backs that up,” Torres Small said Sunday. “Here in Southern New Mexico we know that if we shut down oil and gas today, we’ll have to shut down our schools tomorrow.”

The oil and gas companies’ letter also charged that Flynn and the association have supported progressive Democratic candidates for the state Legislature who defeated moderate Democrats in the primary election earlier this year. It called those moderates “valuable industry allies” and named one — Sen. John Arthur Smith of Deming.

“When Mr. Flynn and NMOGA start playing politics and supporting those who are not only detrimental to our state but our livelihoods and the future of our children, we cannot and will not remain silent,” the letter stated.

Torres Small’s race against Herrell is expected to be one of the most competitive House contests in the nation.

The Democratic incumbent, whose district has long been a Republican stronghold, has come under fire for voting to impeach President Donald Trump.

Flynn was state environment secretary from 2013-16 under former Gov. Susana Martinez, a Republican.

If Small acted in concert with the Republicans on fracking she should be commended, it doesn’t mean you are a traitor to the party. Ryan is entitled to his opinion, Pearce needs to relax, there is no conspiracy here.

So this dozen or so small oil and gas producers that called for the ouster or resignation of Flynn think this is the first time the New Mexico Oil & Gas Association has been political? Really?

And exactly how many people in this state give any weight to what Pearce says, thinks, or does?

What is clear from this article and especially ex-congressman Steve Pearce, is the near racist attitude when Republicans speak about Democrats which is the product of the coalition of the Republican Party and the Christian-Conservative movement after the Nixon debacle. I disagree with Rep. Torres-Small's vote on fracking, but then I don't tell my wife how to vote or divorce her for having a different opinion than me either.

I’m going to post this - it is not a personal attack on Flynn, rather, it is public information:

Ryan Flynn was arrested for DUI - here is the video showing his interaction with an APD officer: https://youtu.be/g7qmlwm1RSo

He was never charged with this crime. The district attorney chose not to pursue charges. Less than a month later, Gov Suzanna Martinez sent close to $1 million in funding to the DA’s office.

Where was Pearce’s outrage then?

Ryan Flynn has a history of poor behavior, yet this is what he is being called out for?

Why didn’t The media call him out when he was harassing NM Environment Department Employees for doing their jobs?

Why didn’t the media connect him to the racist comments made between him and Pat Rogers about Native Americans?

In these cases, the media has failed to do its job.

Republican chairman, Steve Pearce, says it is illegal for a nonprofit to also be nonpartisan. Understanding that Pearce is not a lawyer, wouldn't a public figure like the chair of the Republican party consult a lawyer before accusing someone of a crime? Surely we shouldn't believe that Pearce is simply willing to be untruthful. Should we?