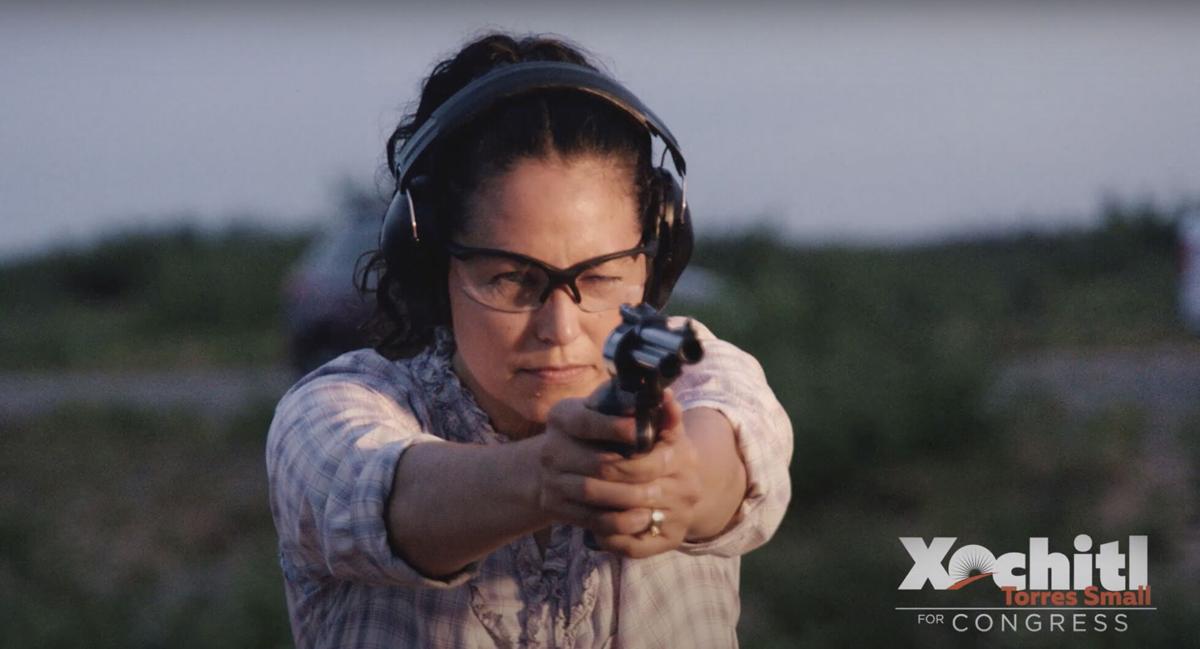 Then-U.S. Rep. Xochitl Torres Small fires a handgun in a campaign ad last year. If she decides not to face GOP Rep. Yvette Herrell to try to take back the 2nd District, the field of Democrats seeking the congressional seat will balloon to at least a half-dozen candidates. 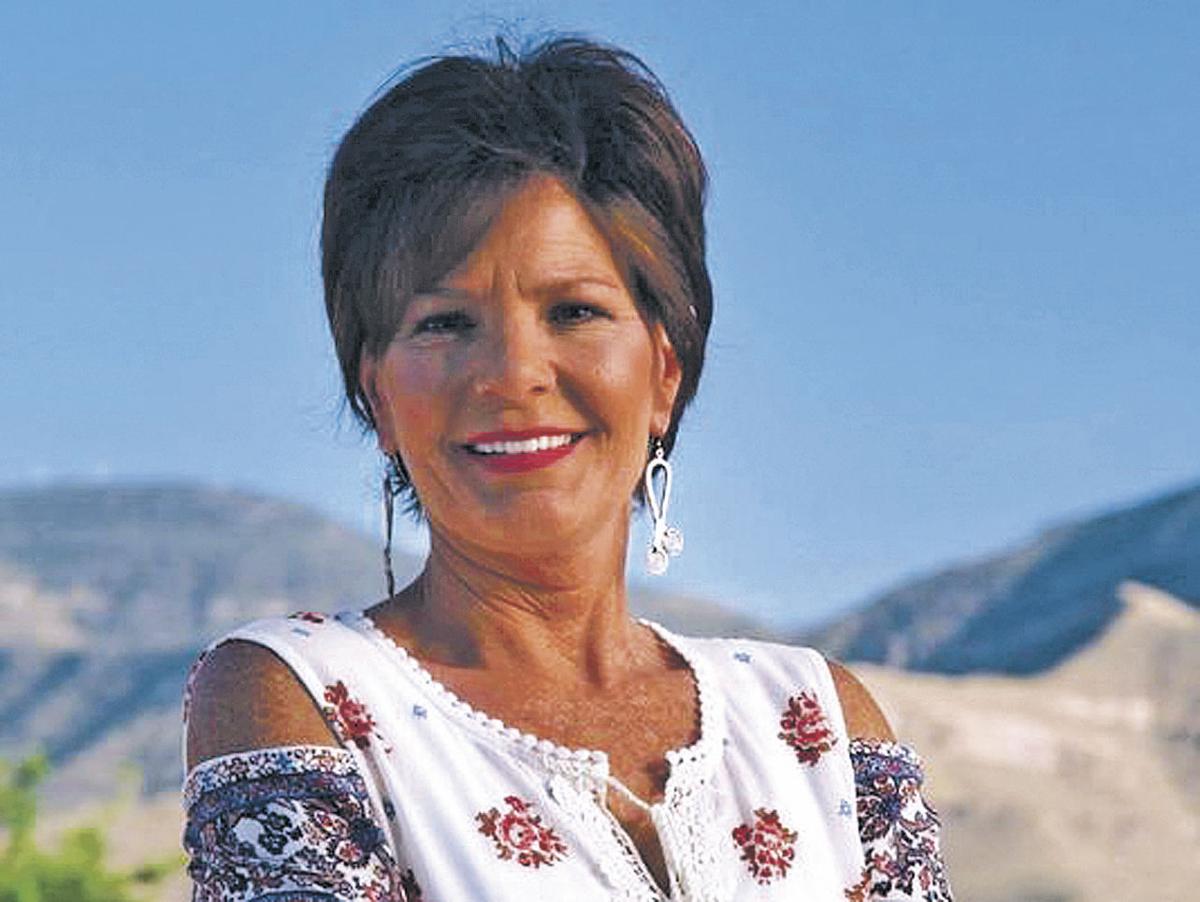 In an era where campaigns are too loud and last too long, a stark exception exists in New Mexico.

The calm and quiet are bad signs for Democrats, usually the state’s dominant party.

No Democrat has stepped up to become a candidate for the seat held by Republican Congresswoman Yvette Herrell.

Herrell, a freshman who represents the 2nd District stretching across Southern New Mexico, should have plenty of potential Democratic challengers by now.

Her vote against establishing a bipartisan commission to investigate the Jan. 6 riot at the U.S. Capitol is only the most recent reason.

“The House bill limited the Commission’s scope to just January 6th and no other days or events leading up to it,” Herrell wrote of her opposition to an essential investigation.

With her clumsy attempt at spin, Herrell alluded to a previous vote in which she objected to certifying Democrat Joe Biden’s election as president. She embraced then-President Donald Trump’s baseless charges that the election was stolen from him.

Herrell herself claimed without any evidence that she was similarly victimized when she lost the 2018 congressional election. In truth, Herrell blundered by declaring victory with thousands of votes still to be counted. She lost to Democrat Xochitl Torres Small by 3,700 votes.

After her defeat, Herrell said Democrats had cheated, but she didn’t contest the election. Doing so would have required her to provide evidence, not just whiny sound bites about fraud.

The irony was Trump lost New Mexico badly, but he carried the 2nd Congressional District by a decisive 12 percentage points. Trump’s strength in the southern part of the state provided long coattails for Herrell.

Torres Small hasn’t said whether she will run against Herrell for a third time. Her silence is the reason no Democrat has filed as a candidate for the congressional seat.

If Torres Small enters the race, the Democratic nomination is hers for the taking. But if she finally says she’s not running, the field of Democrats seeking the congressional seat will balloon to at least a half-dozen candidates.

The primary election is a year away — long if you’re not running, brief if you are. Any Democratic newcomer would need every minute to mount an effective campaign against Herrell.

Aside from Torres Small, the two Democrats with the highest visibility in the 2nd District aren’t considering a congressional campaign.

Morales said Torres Small has a good policy record to run on, including obtaining federal funding to save the medical center in his hometown.

Torres Small, though, ran a listless campaign in 2020. She feared Trump’s popularity in the 2nd District and did little to differentiate herself from Herrell.

At one stage, Herrell and Torres Small even released dueling advertisements showing them shooting pistols or long guns at targets.

When Torres Small wasn’t wasting money and airtime on gunfire, her overriding claim was political parties don’t matter to New Mexicans. Torres Small’s statement made no sense with a polarizing Republican president in office.

Herrell seemed more comfortable than Torres Small in making sure not to antagonize Trump. She had been practicing for months. During a contested Republican primary, Herrell and her main opponent each professed to be more devoted to Trump than the other.

Torres Small, who had worked on the staff of Democratic U.S. Sen. Tom Udall before becoming an attorney, wasn’t herself in the last congressional campaign. The packaging of a candidate in an attempt to comport with polling trends seldom excites voters, and it didn’t work for Torres Small.

Still, if she sits out the race, Democrats might not be able to find a name candidate to challenge Herrell. And the longer the Democrats have to sit and wait for Torres Small’s decision, the less likely it becomes that a lesser known candidate can catch fire in a district Republicans have dominated for 40 years.

The clock is ticking for Democrats. Despite Herrell’s failings, especially her unwillingness to support an honest inquiry into the violence that rocked the Capitol and shook the country, she’s getting stronger by the day.

Yvette Herrell is vulnerable to defeat. Her expressed undying support for Trump and accusations of corruption should be enough to get her defeated in 2022.

Is redistricting going to significantly change the political dynamics of her district? That could help Democrats if it's done right.

Voters in Yvette Herrell's congressional district haven't yet learned what's good for them.

It's not Yvette Herrell.

Why no attempt to reach Ms. Torres Small for comment, in a opinion piece about her? New Mexico certainly needs no Trump clones like Rep. Herrell. As for guns, its a lethal hobby no lawmaker should portray. By 89% if you kill someone with a gun, it will be yourself, a relative or a friend. You will never use a gun lethally in self defense, only 300 justifiable homicides occur each year in the US, that is about 6 per state, for New Mexico, even less by population, 2 per year. The Harvard Public Health study of non-lethal defensive gun use claims found them mostly brandishing. Afraid? Get a dog. Or two. Candidates, don't feign gun use, and people, don't vote for gun users. https://ucr.fbi.gov/crime-in-the-u.s/2017/crime-in-the-u.s.-2017/tables/expanded-homicide-data-table-15.xls AND https://ucr.fbi.gov/crime-in-the-u.s/2017/crime-in-the-u.s.-2017/tables/expanded-homicide-data-table-10.xls http://www.hsph.harvard.edu/hicrc/firearms-research/gun-threats-and-self-defense-gun-use-2/

If you pin David Hemenway down, he will have to admit that estimates of DGU are all over the map and depend on a lot of ill-defined variables, such as how you define a DGU. I'm glad Torres Small isn't the kind of close-minded ideologue you would prefer.

Ms. Herrell has voted against everything that President Biden has done to help Americans. Her constituents want her do do so. As for the word conservative, that really does not describe the current Republican Party. At least Ms. Torres-Small reached across the aisles. Ms. Herrell will not do so. Why run against someone who is just helping the mainstream Republicans in Washington and who is "hanging out" with the likes of Greene, Gaetz, etc.? They are the "in" crowd who have an ulterior motive to be in Congress.

"Hello Friends, My name is Prince Michael. As the internationally-acknowledged heir to the most powerful, victorious and blessed Royal-lineage in World History, The House of David, I need a true and reliable source of News and Information.

That's why I subscribe to the Santa Fe New Mexican, with world-class columnists and journalists - at a great price.

So, I'm humbly inviting Everyone to support great LOCAL, community-based journalism, and subscribe to The Santa Fe New Mexican today!"

About 4 election cycles ago, I decided to watch FOX news and listen to Rush Limbaugh extensively to gain some insight into the “Conservative” viewpoint. My enduring memory is Sean Hannity SCREAMING at the top of his lungs on election night: “John Kerry is a liar! John Kerry is a liar!” I know plenty enough about the viewpoint of my “enemy”—and nothing has changed. There is nothing there but resentment and the non-stop drive to divide citizens against each other. It’s a lot harder to talk about hope, change, and unity. The Republicans are a corrupt, aging, festering, bag of despair.

The 2nd CD is more conservative than the rest of the state, which is why Torres Small wanted to be seen firing a gun rather than grabbing them. I seem to recall she actually is a bit of a shooter.

Unless the Democrats in the Roundhouse figure out a way to gerrymander the 2nd CD into a bizzare shape, it will remain conservative. Dems will have to field a centrist candidate such as Torres Small to win. If there is a primary and if it results in the D base nominating someone who would win in the 3rd CD, that bodes poorly for the D party in the 2nd CD. Then again, with Mr. Trump gone, there won't be strong GOP coat tails.

But not my CD, not my problem. I wish Torres Small would run but that's up to her, not those of us up here.

BTW, for those unfamiliar with firearms, it looks like Torres Small is firing a centerfire large frame revolver. Possibly 357, 41, or 44 magnum. Nothing like the little plastic 9mm semiautos that are the subject of a lot of discussion as far as urban crime or concealability.

The Republican party of today is a clown show. Matt Goetz? Marjorie Taylor Greene? No thanks amigo.

Do you live in CD 3 and will vote in any election there?

I’m not saying the Dems are without their own issues. But the GOP has devolved into a reactionary, anti-intellectual, anti-science, authoritarian mob of mostly white people who somehow feel they are being “oppressed” by being asked to wear masks. Clown show.