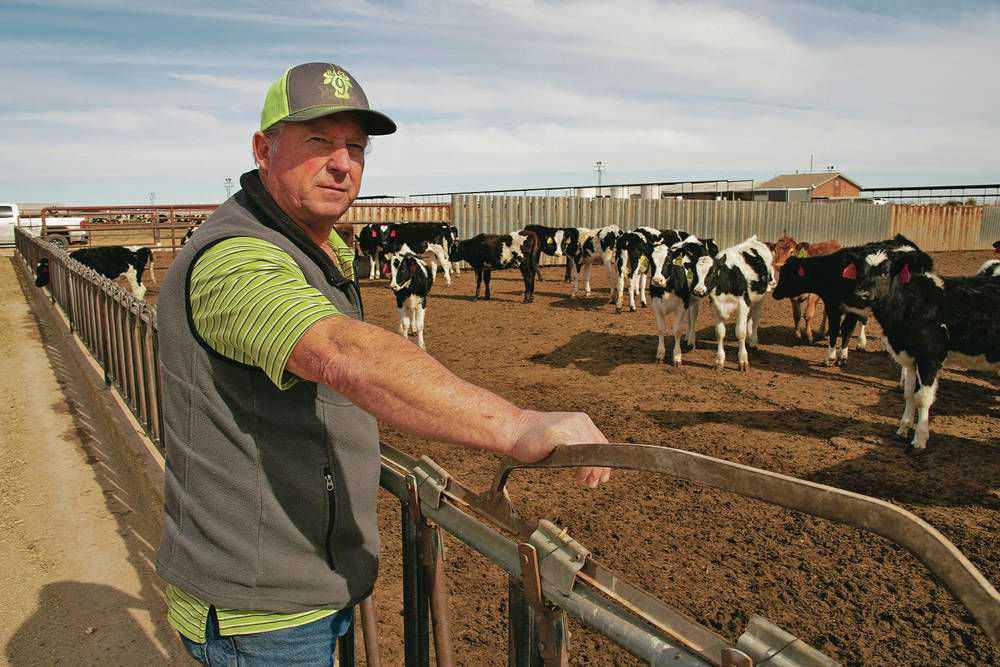 Clovis dairy farmer Art Schaap looks over some of his 1,800 Holstein cows on the Highland Dairy. PFAS pollution caused Art Schaap to dump thousands of gallons of milk and mull whether he needed to kill off his cattle. Courtesy Don J. Usner/Searchlight New Mexico 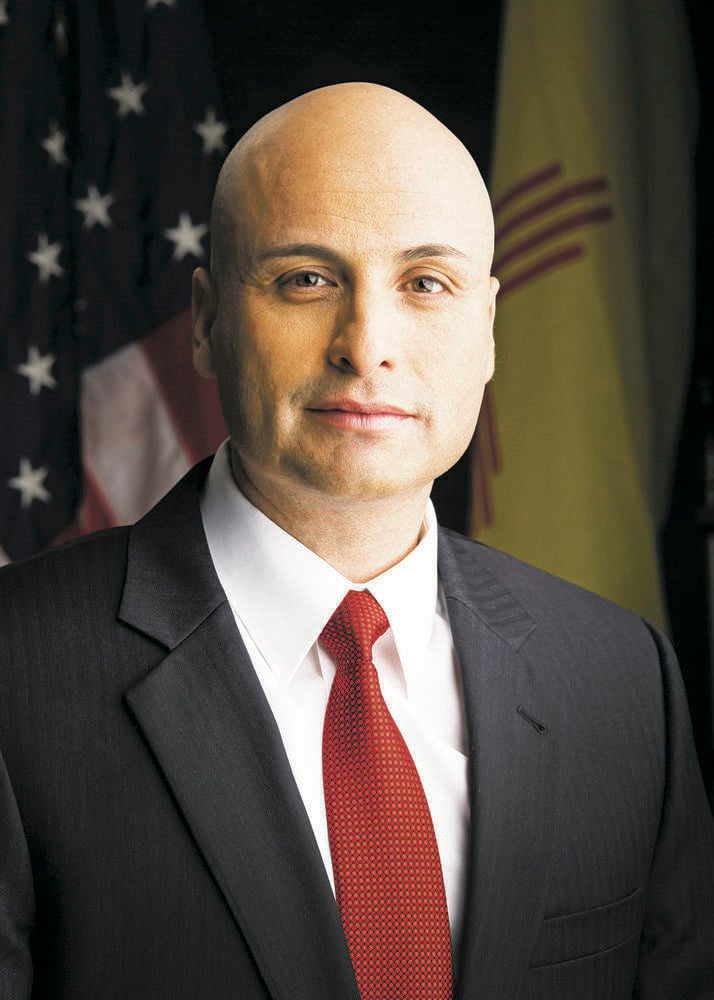 Clovis dairy farmer Art Schaap looks over some of his 1,800 Holstein cows on the Highland Dairy. PFAS pollution caused Art Schaap to dump thousands of gallons of milk and mull whether he needed to kill off his cattle. Courtesy Don J. Usner/Searchlight New Mexico

Months after suing the federal government over the discharge of toxic, cancer-causing chemicals that have tainted New Mexico’s groundwater, Attorney General Hector Balderas now says he considers the lawsuit against the U.S. Air Force a public “corruption case.”

“It’s my position, looking at the entire set of facts, that this is not just an environmental battle for environmental cleanup,” Balderas said during a phone interview Friday. “This is absolutely a corruption case, where a powerful federal entity needs to account to what have been very committed and loyal citizens in New Mexico.

“It’s corruption and un-American,” Balderas said, referring to chemical plumes of unknown size around bases in Southern and Eastern New Mexico — which critics say are putting residents, businesses and livestock at risk — and the Air Force’s failure to remediate them.

Public corruption typically involves asking for or accepting something of value in return for something else, such as bribes, kickbacks or racketeering. Balderas’ spokesman, Matt Baca, later clarified the Democratic attorney general is not planning to file any corruption charges against the Air Force and has no evidence to suggest any criminal wrongdoing. The legal filing from his office against the Air Force makes no corruption allegations.

“He just means that any time an entity, through misrepresentation or lack of accountability or transparency, negatively impacts our communities, it’s his view that he sees those things through a corporate corruption lens, a public corruption lens,” Baca said. “I think the focus for him is the abuse of power.”

The lawsuit alleges the Air Force’s discharges of toxic pollution over decades “have created an imminent and substantial endangerment to human health and the environment.”

It seeks immediate injunctive relief to recover past and future costs associated with the environmental and public health risks related to PFAS pollution from Cannon and Holloman Air Force bases. It also asks the Air Force to clean up the pollution and alleges the federal government violated the state’s hazardous waste laws.

The Air Force has asked a federal judge to dismiss the lawsuit. It did not respond to inquiries Friday for comment.

Balderas’ office is now waiting to hear back from a federal judge on how the case will proceed.

For years, the Air Force used a firefighting foam in routine training that contains chemicals now known to harm people. The foam has leached off bases into nearby aquifers, and now plumes of carcinogenic substances, abbreviated as PFAS, in Southern and Eastern New Mexico are moving at an unknown speed.

PFAS are a class of 5,000 chemicals known to increase the risk of cancer, impair childhood development, affect fertility and the immune system, and increase cholesterol levels, according to the federal Agency for Toxic Substances and Disease Registry. They are found in everything from firefighting foam to fast-food wrappers, clothing, cosmetics, upholstery and nonstick cookware.

They have also been dubbed “forever chemicals” because they have some of the strongest known chemical bonds. “They don’t break down” according to the U.S. Environmental Protection Agency. They accumulate in animal tissue over time.

The U.S. Department of Defense has known for at least three decades that PFAS chemicals can kill aquatic life and harm the environment. In 2011, the agency admitted the chemicals may have created a “crisis” of groundwater contamination at more than 400 military installations across the country, according to the lawsuit.

But state officials were not notified PFAS contamination was found in excess of federal health advisory standards until August 2018, New Mexico Environment Secretary James Kenney said during an interview Friday.

Testing results of nearby public water supplies in Clovis and Alamogordo did not find detectable PFAS levels, according to documents provided by the Environment Department.

The state Department of Health has tested 120 private wells, Kenney said, and those with PFAS levels that exceed the EPA advisory limit of 70 parts per trillion have received water filters.

But there could be people living near Clovis who have not heard about the contamination. Since private wells are not part of the public drinking water system, they’re only tested if the property owner makes a request from the Health Department.

“We have people … who may have impacted wells in Clovis and do or don’t know about it and are having to make a choice: ‘Do I make my dinner with this water tonight?’ That’s the concern for us,” Kenney said. “There are people drinking this water today.”

PFAS had been used for more than 50 years at Cannon Air Force Base near Clovis. The chemicals leached into the Ogallala Aquifer, the attorney general’s lawsuit says.

Balderas said he’s seeking to remedy the issue against the backdrop of “generational and legacy harms” from other pollution — including uranium mining, nuclear weapons testing and nuclear waste, as well as other contamination from companies and agencies that have treated the state as “a dumping ground.”

The attorney general criticized “leadership in past generations [that had been] slow to inform the general public of how dangerous these chemicals have been.”

Balderas reiterated his frustration with the way Air Force officials have responded to PFAS pollution in New Mexico and the lawsuit. In addition to fighting cleanup efforts, he said, the military has been opaque and uncooperative.

“I’ve been appalled at how little the Air Force has moved to remediate and clean up and provide resources to the general communities that they’ve harmed,” Balderas said. “I’ve lost my patience. With these environmental harms, you have aspects of corruption that we need to … aggressively and gladly litigate.”

Balderas and Kenney said New Mexico, one of the first states to sue over PFAS contamination at military installations, could be paving a path for other states seeking the Air Force’s cooperation in cleaning up pollution at hundreds of sites.

But cleanup, even if the suit is successful, could take years, said Charlie de Saillan, an attorney with the nonprofit New Mexico Environmental Law Center. He has filed a legal brief on behalf of three New Mexico lawmakers in support of state efforts to compel the Air Force to pay for cleanup.

The Air Force has been uncooperative in other states as well, critics say. For example, a state geologist found PFAS contamination in a small northern Michigan town near the former Wurtsmith Air Force Base. The Air Force has tried to reassure local residents but still has no cleanup plan in place.

“I think there is an amazing amount of state level advocacy … but there’s a huge question about who’s gonna pay for it,” said Sonya Lunder, senior toxic policy adviser for the Sierra Club in Boulder, Colo.

“It’s a scary position for states to be in right now,” she said.

Another Public Relations exercise by Hector Balderas, who is ALL PR all the time.

To find corruption we need look no further than the AG office, where Hector, on election, terminated some 40 employees as At Will employees. He terminated many others with the same claim, which allowed Hector, and his favorites to terrorize AG employees who could be dismissed on a whim. Recently, an Appellate decision overturned Hector's position, and leaves all the AG employees terminated without cause with actions for back pay with benefits, etc. Millions of dollars will be paid out, for Hector's wish to be Dictator and fire people on a whim. WE will pay, Hector will no longer be able to terminate his employees without cause. Hector SHOULD pay for this false claim, and many others, but it seems there is no oversight of the AG office. The media won't even write about this very important event. For those who are interested in the Balderas corruption, and his wish to play King, and fire employees at will, see:

Problem is this exact issue caused by various military agencies exists all across the US, particularly in Michigan. Fed govt will fight this tooth and nail due to size of the overall liability.