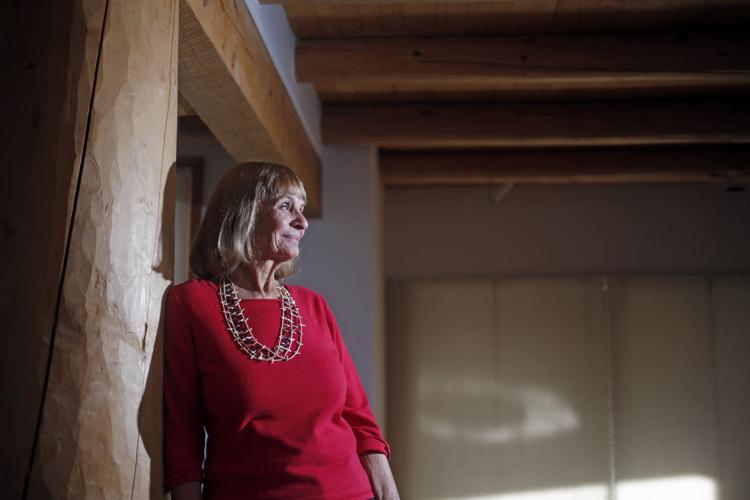 Author Anne Hillerman at her Santa Fe home Wednesday. She recently accepted a 2021 Rounders Award, which honors ‘those who live, promote and articulate the Western way of life.’ 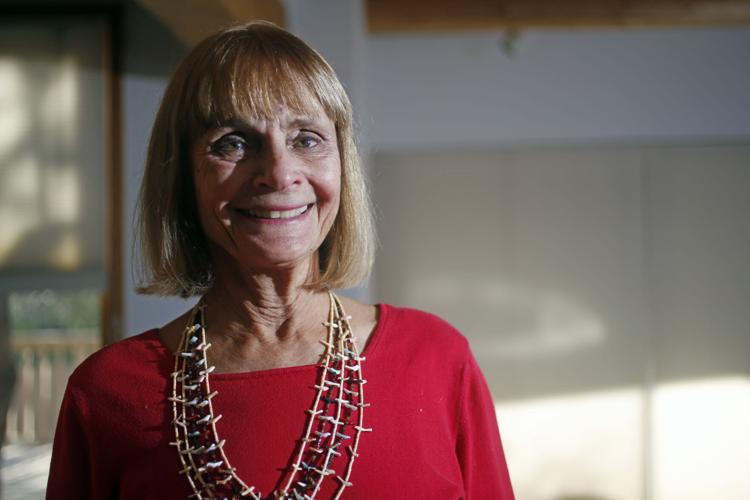 Author Anne Hillerman at her Santa Fe home Wednesday. In addition to writing novels, Hillerman is also involved with New Mexico Press Women, Many Mothers, the Santa Fe Botanical Garden, Kitchen Angels, the Institute of American Indian Arts, and the Museum of Indian Arts and Culture.

Author Anne Hillerman at her Santa Fe home Wednesday. She recently accepted a 2021 Rounders Award, which honors ‘those who live, promote and articulate the Western way of life.’

Author Anne Hillerman at her Santa Fe home Wednesday. In addition to writing novels, Hillerman is also involved with New Mexico Press Women, Many Mothers, the Santa Fe Botanical Garden, Kitchen Angels, the Institute of American Indian Arts, and the Museum of Indian Arts and Culture.

Anne Hillerman didn’t get to see much of Santa Fe on her first trip to the city. The future author of six novels in the popular mystery series started by her father, Tony Hillerman, was in utero during her parents’ short vacation here in July 1949.

The Hillermans also were job scouting, and they moved here from Oklahoma three years later, when her father took a position with United Press International’s local bureau.

Like her father, Anne Hillerman would become a notable New Mexico journalist and author.

Recently, she took a trip to the New Mexico Farm and Ranch Heritage Museum in Las Cruces to accept a 2021 Rounders Award. It’s one of many honors she has received over the years.

But, she said with a smile, “It’s the first honor I’ve ever received from a state agriculture department.”

Rounders Awards, created in 1990 by then-state Agriculture Secretary Frank DuBois, honor “those who live, promote and articulate the Western way of life.”

“I was very honored to receive the award,” Hillerman said, “partly for what it represents and partly because there have only been three women Rounders in the past — visual artist Pablita Verlarde, artist and editor Pat Evans and saddle maker Rosemary Wilkie.”

Some of Hillerman’s early memories involve The Santa Fe New Mexican, where her father was an editor in the mid-1950s and early ’60s.

She attended St. Francis Cathedral School and could walk to her father’s office after school, she said. “I liked that a lot more than taking the bus home, especially if the presses were running.”

In 1954, the Hillermans adopted their second child, 9-month-old Sherry Diane. James McGrath Morris recounted Anne Hillerman’s reaction the family’s new addition in his just-published biography, Tony Hillerman: A Life. At first, all went well, with a trip to the zoo and some ice cream after picking up Sherry in Albuquerque.

“We didn’t ever take her back,” Anne recalled, according to Morris’ account. “And I remember waiting. … I remember thinking, ‘What’s this baby doing here?’ ”

Her feelings soon softened, and the Hillermans went on to adopt four more children.

Anne Hillerman described her mother, Marie Unzner Hillerman, as “a smart, gracious, beautiful woman, what everyone wants in a mother. She had a degree in microbiology and a teaching certificate. A life of the mind was important to her, and she encouraged me and my sisters to get as much education as possible.”

In 1962, when Hillerman was in eighth grade, her father took a position at the University of New Mexico that would also allow him to pursue fiction writing, a long-held dream. It meant obtaining a graduate degree over two years and then heading up the university’s journalism department.

He would be one of his daughter’s future college professors.

“When I was growing up, people would ask me if I wanted to be a journalist like my dad or a scientist like my mom, and I’d say no,” Hillerman said. “I really didn’t know what I wanted to do.”

As a student at UNM, she said, “I floated around between several different disciplines, including music, which I loved, but I knew I didn’t have enough talent or creative juice for it.”

When she finally had to decide, Hillerman took a practical approach, comparing the credits she’d amassed to the graduation requirements for each major. Journalism was the shortest path to a degree.

Morris wrote in his biolography of Tony Hillerman that she “made the mistake of enrolling in her father’s early-morning class.

Her eyelids grew heavy and she dozed off to the sound of the voice that had once put her to sleep reading bedtime stories.”

Carrying on a legacy

After graduating from UNM, Anne Hillerman accepted a copy editing job at The New Mexican, where she worked for 12 years, moving to positions as a reporter, editor of Pasatiempo‘s predecessor and editorial page editor. She was the first woman to hold the post.

After a break for motherhood, Hillerman returned to journalism with a part-time position at the Albuquerque Journal North. At the same time, her nonfiction writing career got underway.

She and Strel were working on Tony Hillerman’s Landscapes: On the Road with Chee and Leaphorn when her father died in October 2008.

“Don and I were doing book tours in 2009 after it was published, and the attendees were always asking me whether there would be any more novels in my dad’s Joe Leaphorn and Jim Chee series,” Anne Hillerman said.

“The answer was no, and I started to realize how much I was going to miss the main characters in the books, in addition to missing my father. I couldn’t do anything to bring him back, but I started thinking about whether I could continue the series.”

Her mother encouraged her interest and offered some gentle editing on the first manuscript, saying, “I like it and I think your dad would be proud of you.” Hillerman sent it to Carolyn Marino, her father’s editor at HarperCollins, who responded with a multibook contract offer.

Her first entry in the series was Spider Woman’s Daughter, and Hillerman described the period leading up to its 2013 release as scary.

“I felt like I had such a responsibility to my dad, as well as to all these readers, many of whom might be skeptical,” she said. “I knew I had to grab their attention and make a good enough impression with the first few pages.”

Hillerman also knew she had made a potentially controversial change, elevating Bernadette Manuelito, a small character in a few of her father’s books, to the central crime solver. “My dad thought he didn’t do justice to women characters, and I agree with that. He was surrounded by strong women in his life, but not many made it into his books. One of the things I’m proudest about is the Navajo community’s enthusiastic response to Bernadette’s new role.”

Spider Woman’s Daughter won the 2014 Spur Award for Best First Novel from the Western Writers of America and landed on the New York Times bestseller list. Its five successors have made the list as well, including the most recent, Stargazer, published in April. At least two more books are on the way in what is now a Hillerman family legacy. The Sacred Bridge, set in the Lake Powell area, will be released in April 2022, followed by a tale taking place at Bears Ears National Monument.

Anne is also carrying on another Hillerman legacy: her parents’ commitment to civic service and quiet philanthropy. Libraries are her top interest.

Hillerman is also involved with New Mexico Press Women, Many Mothers, the Santa Fe Botanical Garden, Kitchen Angels, the Institute of American Indian Arts, and the Museum of Indian Arts and Culture.

Asked whether she feels spiritually closer to her father by continuing the book series, Hillerman said: “Yes, I absolutely do. As a dad, he could be very distracted, and especially as a teenager, I thought, ‘Why isn’t he paying more attention to me?’ But now that I understand what writing fiction is like, I cut him a lot more slack.

“He felt like he was given a gift by being able to write these books, and so do I.”

What: “How UNM Turned Hillerman into a Novelist,” a lecture by James McGrath Morris, will be introduced by Anne Hillerman.

Where: The Willard Room at the Zimmerman Library at the University of New Mexico.

Those good old days were often a mirage

Dogs are our protectors, too